Given a second shot at the property, the filmmakers didn’t make the same mistakes of the first film and attempt to make it a more grounded, realistic take on the franchise. That ship sailed long ago with mutated ninja turtles. Instead, they fully embraced the zany fun and outlandishness of the TMNT universe. The result was a surprisingly faithful take that actually does justice to the property.

Franchise newcomers expecting a Marvel Studios style take on the Turtles will likely be disappointed. But for old school fans, Out of the Shadows is going to feel like binging on the classic 80s cartoon.

Bebop and Rocksteady are here! The Foot Clan are actually sword carrying ninjas instead of gun-toting thugs! Casey Jones has anger management issues! They even got Commander Krang right!

Returning screenwriters Josh Appelbaum and Andre Nemec deserve a lot of credit for fixing everything they so spectacularly botched in the first film. The tone of the film is much livelier and doesn’t feel like they’re taking everything so seriously. If the script skews a bit silly, at the very least it’s faithful to the source material.[irp]

As the title implies, the turtles — Leonardo, Raphael, Donatello and Michelangelo — are starting to get a little restless operating in the cover of darkness protecting the city. The brothers want to be able to walk among the people without being regarding as freaks or feared due to their appearance. Ironically, Shadows does a more effective take on the X-Men plight than X-Men: Apocalypse. 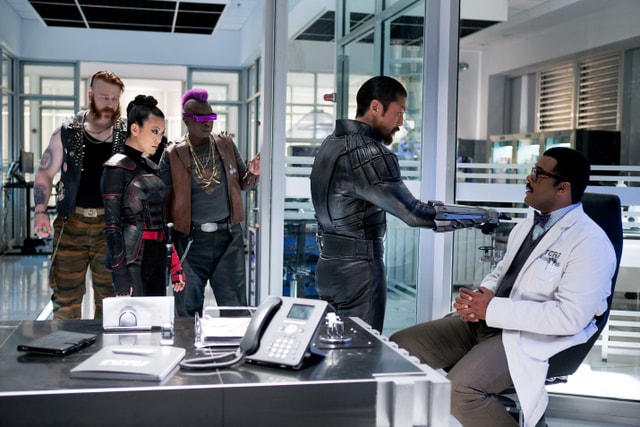 The turtles have to put their personal dreams aside. Their ally, April O’NeIl (Megan Fox), learns the brilliant inventor, Baxter Stockman (Tyler Perry), is working with the dreaded Foot Clan to free its leader, Shredder (Brian Tee), from police custody.

Shredder gets an assist from fellow prisoners Bebop (Gary Anthony Williams) and Rocksteady (Stephen Farrelly aka WWE superstar Sheamus). In appreciation, Shredder uses an experimental compound to mutate them into a rhino and warthog provided by his alien ally Krang. Yes, it’s goofy, but adding Shredder’s animalistic henchman adds that extra degree of authenticity the first film lacked.

Like Transformers director Michael Bay and TMNT Director Jonathan Liebesman before him, Director James Green understands Fox can sell movie tickets. Director James Green frames Fox in most scenes like she’s posing for a magazine cover and isn’t shy about utilizing slo-mo for basic April walking segments. Not like most folks will be upset about that decision. 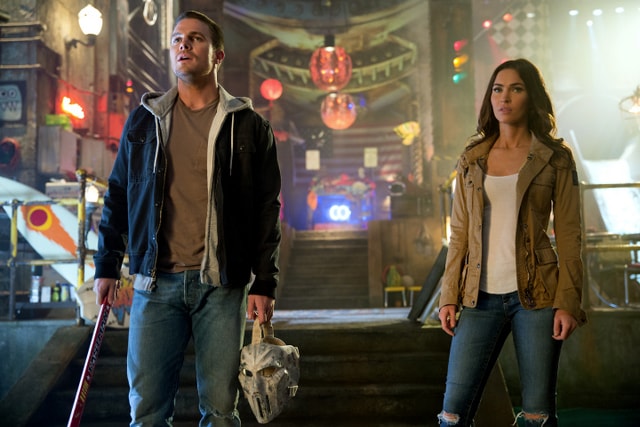 At just under two hours, the film is a little too long. That could have easily been addressed by cutting most of Will Arnett’s solo segments. While he’s fine in those scenes, Arnett likely isn’t the draw in a Ninja Turtles movie for most fans and works best as a background character.

Another minor complaint is Casey Jones. Arrow star Stephen Amell plays the turtle’s sports fanatic ally. Amell is a little too earnest and upbeat to play the somewhat loose cannon of the turtle franchise. But since Warner Bros. isn’t calling him up for an Arrow movie anytime soon he’s got to take whatever big screen opportunities present themselves.

There needs to be a moratorium on blockbuster films’ final act centering around an alien invasion in a big city. It’s just been done too much at this point to seem fresh. While Green does his best not to try and follow the path of Joss Whedon, Zack Snyder and Michael Bay, there’s just nothing he can do to fight through that overwhelming sense of déjà vu.

Green does stage a sequence midway through in the film’s signature action scene. The turtles skydive in pursuit of Bebop and Rocksteady leading to a thrilling battle. It’s well executed and worth the ticket price alone.

There’s a lot of nods to Turtle fans throughout and an overall sense of silly fun is readily apparent. It’s not the breakout hit of the year, but this is the first Teenage Mutant Ninja Turtles movie in a long time to actually do right by the franchise and fans making Out of the Shadows a minor miracle for the heroes in a half shell.