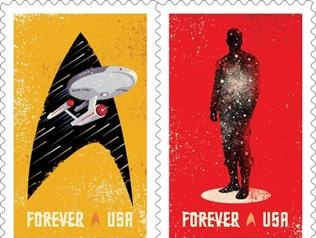 After the tragic death of Star Trek star Anton Yelchin, I figured we could all use some fun Star Trek news. To help celebrate the 50th anniversary of the Star Trek TV show, the U.S. Postal Service is debuting Star Trek Forever stamps.

Fans of the 1960s show can grab the stamps Set. 2 at the kick-off of Star Trek: Mission New York. The three-day event will see thousands beam up to New York’s Jacob K. Javits Convention Center. Sept. 2 marks the first-day-of-issue ceremony at noon.

Alexandria, VA.-based art director Antonio Alcalá led the stamp design by Heads of State of Philadelphia. Each stamp is tied in to the program, which first aired Sept. 8, 1966. The stamps feature:

Can’t make it to New York? The stamps will go up for pre-order the first week in August on usps.com/shop and will be delivered after Sept. 2. Ordering stamps online and having them delivered by the post office is kind of meta, no?

This is an impressive initial four stamps with designs that would make for some awesome posters for your favorite Trekkie. Considering the license I’ve gotta assume these will be a fast seller. Fan demand will more than likely lead to a second series. If so, who would you like to see referenced and how? Sulu’s sword? Uhura at the control deck? Bones at the medical bay? There seems to be a ton of interesting possibilities.