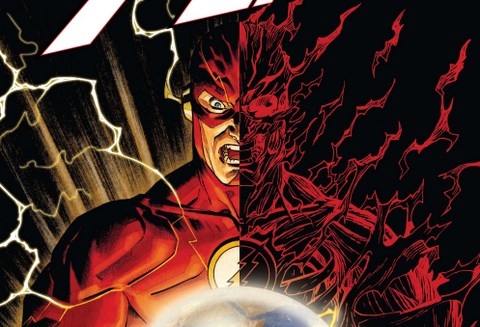 Three issues into this new post Rebirth era of Flash and it remains easily one of the best, most consistent titles going today. Thunderstruck continues The Flash’s strong run that keeps getting better with each issue.

Picking right up from last issue, Barry Allen’s friend August was hit by the Speed Force. Now Barry’s faced with a dilemma — help August learn how to use his powers or discourage him to keep him safe. Meanwhile Iris West is investigating Dr. Carver, the potential culprit in the Speed Force storms and Wallace West is experimenting with his super speed abilities.

Barry won’t have long to decide on August’s potential as a speedster as The Black Hole gang resurfaces with a new speed-crippling weapon.

It’s hard to believe Joshua Williamson hasn’t been writing this book for years. Everything about Thunderstruck read like classic Flash. Williamson is right in synch with the characters from the established guard like Barry and Iris to the newer characters like Wallace West and August.

Inner monologues don’t work for every character, but it fits with Barry as they offer greater insight to his thoughts. So when Barry wrestles with his renewed desire to have some help dealing with Central City’s crime and protecting his friend the conflict doesn’t feel forced just to cause tension. At his core, Barry wants to help everyone even if that means training them to be a hero.

It’s not just Barry who shines. Watching Iris in action reporting was a nice touch. With Lois Lane sidelined, it’s good to see at least one fearless reporter doing whatever it takes to uncover the truth.  And Wallace is pleasantly fun as he learns to master the Speed Force.

Carmine Di Giandomenico’s pencils might not work for every title, but they are a perfect fit for Flash. The characters constantly look like they’re in perpetual motion and there’s a liveliness to the panel layout that just works for the title. Ivan Plascencia’s colors again complete the equation for a dynamic visual presentation.

Williamson’s pacing of the story is just right as well. Thunderstruck doesn’t read like a story extending chapter, but a natural progression of a story arc. Williamson isn’t writing for the trade.

This was my final read for new comics this week and it didn’t let me down. With a terrific cliffhanger hopefully the two weeks to follow up on Thunderstruck won’t be too slow.