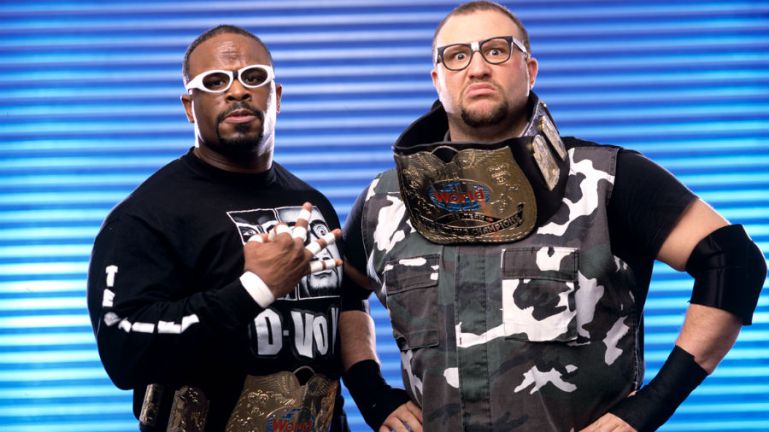 With the reveal of the Elite 44 prototypes and Wave 43 now available we’ve almost caught up to Mattel. They’re sure to get some more distance from collectors after San Diego Comic Con next week though. Now we know one set of Elites we can expect to see with Elite 45 thanks to Instagram user peopleschamp25. The set looks promising on paper. Era and attire choice could be the deciding factor in the end for me though.

Lord William Regal – In a perfect ideal world Regal will be in his blue tights with red trim featuring more of his WCW Blue Blood look. The WCW-specific roster is kind of limited so taking advantage of characters who can double dip would be smart. If Mattel can fit Regal’s swank jacket into the budget that would be all I’d need.

Bubba Ray Dudley and Devon Dudley – I’d love for these guys to be in their early WWF camo attire with glasses that actually fit. And include a table with both because we can never have enough tables. Perhaps helping the odds Mattel recently released the Dudleys in their modern attire as part of a Basic series.

Narcissist Lex Luger – Beyond a jeans wearing Wolfpac version, this was near the bottom of my most wanted Luger variants. On the bright side this will give the stacked face side of the New Generation era another heel to battle. Until he gets all patriotic and what not.

Seth Rollins – Have to assume that this updated Seth will feature The Architect in his Summerslam 2015 all-white attire. That reminded me of Ted DiBiase’s all-white look from Summerslam 92 and I don’t think that was a coincidence. As far as variants of the main stars go, this will definitely be one worth grabbing.

Roman Reigns – It’s hard to imagine how much different a Reigns figure will be at this point. His look hasn’t changed since he initially split from the Shield. At most I could see this figure having a new head sculpt and possibly the WWE title to help sell it.