Don’t call it a reboot. The DC Icons New 52 Justice League pack is getting a makeover.

Back at Toy Fair, DC Collectibles revealed a seven-pack featuring New 52 versions of the Justice League. It was a nice way for fans to get the whole team in one full swoop. Now in a move sure to cause a little controversy, the 7-pack has been updated. Now instead of the New 52 attires, half the set features the team’s DC Rebirth costumes.

Green Lantern, Cyborg and The Flash remain unchanged, but there’s significant switches for Superman, Batman, Wonder Woman. Aquaman has a mild switch on his collar. 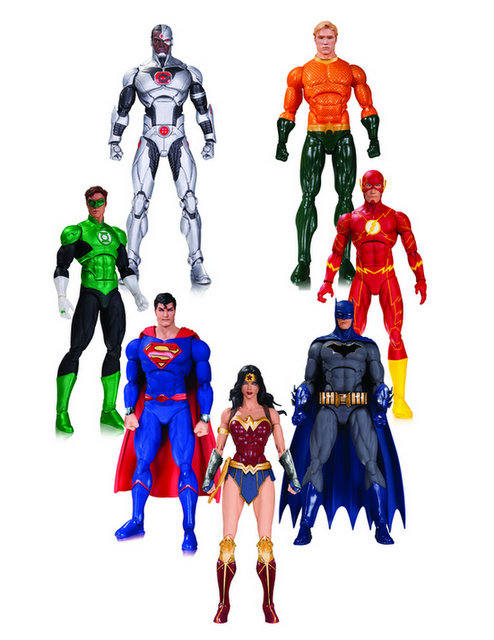 Superman is the biggest switch. Instead of the more armored attire of the New 52 costume, this is Superman in the outfit he’s currently wearing in the DC Universe. Superman is now essentially a repaint of the DC Icons wave 3 figure scrapping all of the unique sculpting elements of the New 52 version.

Wonder Woman’s gauntlet and leg braces have been updated from the New 52 silver to the traditional gold/yellow. Batman loses the New 52 knees in favor of a highlighted bat and a new utility belt.

Since the set is still a ways off maybe DCC could switch Hal out for either Simon Baz or Jessica Cruz to reflect more of the actual Rebirth Justice League.

The Rebirth set is slated for release in March 2017 with a retail price of $100. The tricky thing with such a distant release date is the characters are almost assuredly going to have some costume changes by that point. The odds are pretty good this set will be long outdated by the time it arrives in comic book shops.

What do you think of the news?