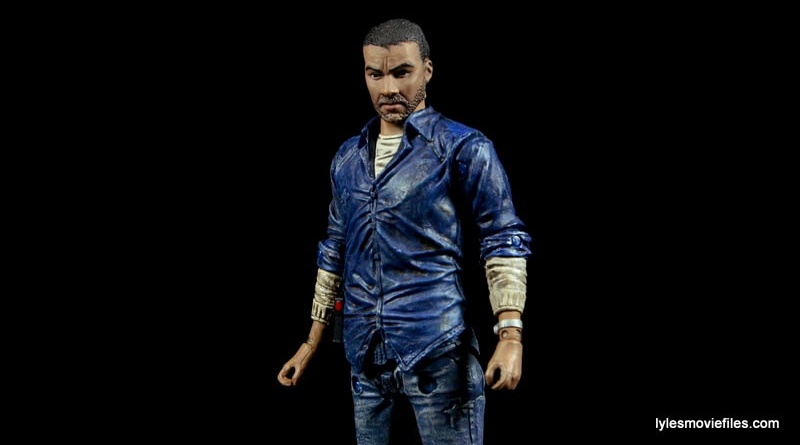 Lee is nearly a perfect figure in The Walking Dead line

When it comes to recent video games, my lose sleep at all costs to keep playing obsession has been Telltale Games’ The Walking Dead. Season 1 is one of my all-time favorite games in large part to its main character, Lee Everett.

Besides being one of the very few lead characters that happens to be black, Lee was a likable everyman faced with making impossible choices while doing his best to protect his young charge Clementine.

I’ve become a late convert to McFarlane Toys’ figure of line of action figures, but I’m quickly catching up. Once MT and Walking Dead creator Robert Kirkman’s Skybound Entertainment announced its latest NYCC collaboration was Lee, it was going to take more than a walker herd to stop me from getting him.

Packaging: I really like how McFarlane Toys differentiates the various Walking Dead figure lines. The TV line features an image with a scene from the show while the comic line has a more generic comic image. For MOC collectors, the inconsistencies are going to be somewhat annoying, but it’s not an issue for me.

The game package features a drawing of Lee holding his axe and a smaller image in the bottom right portion of the card. The cardback shows a signature shot of Lee with a leery glance behind while keeping Clementine close by.  I’m a big fan of multiple images of the source material so I liked all these various looks of Lee.

Likeness: The challenge for the MT sculptors here is turning a video game character into a figure that could reasonably stand alongside your existing Walking Dead figures without looking too out of place. The end result is pretty strong.

Lee has a typical focused expression that’s vintage Lee — focused and thoughtful. His shirt has a good number of creases and folds and in keeping with MT figures, has much more detail than your typical 5″ figure. Lee’s watch is especially well detailed for this scale. 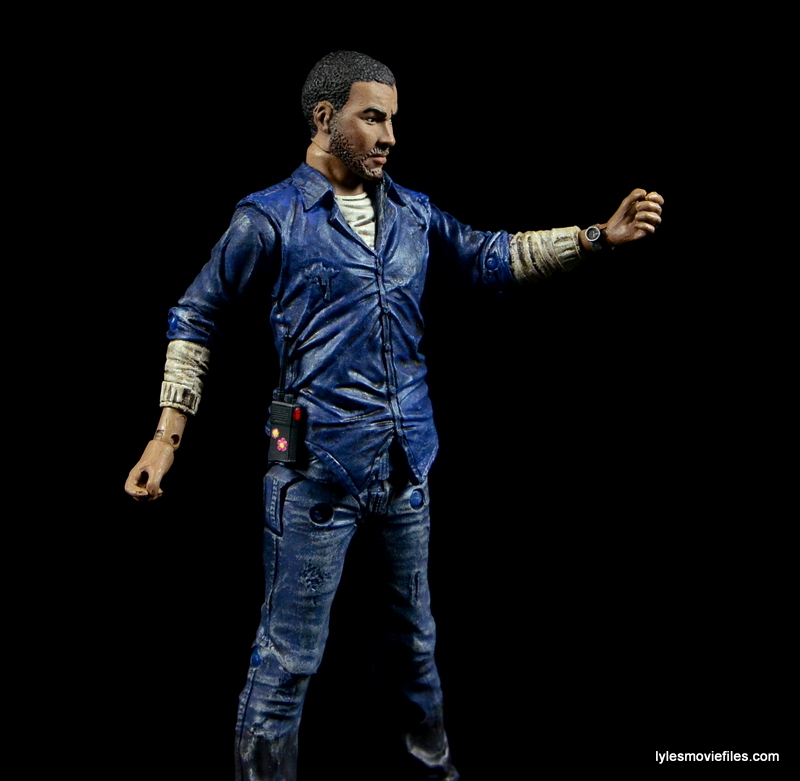 Paint: The cel shading color technique used in the game didn’t necessarily allow for one consistent skin tone for Lee. Clearly he’ more brown-skinned than the more dull grey tone the figure sports. Additionally, Lee’s beard is too light resembling stubble more than a beard.  That’s the biggest disappointment in an otherwise solid paint job.

The outer blue shirt looks terrific. There’s a spot on the shirt that looks like it should be painted differently, but I’m not sure if that’s a widespread issue. The blue buttons on the shirt are source material accurate. I had to check to make sure. The white shirt has a good amount of grime and dirt while the jeans are fantastic, looking like they’ve been worn for awhile.

Scale: Lee is average height for an adult male and is still taller than the Season 2 edition Clementine although now that I have Lee, hopefully we get a Season 1 Clementine.

Articulation: Originally, MT has a very simple articulation model with The Walking Dead figures, but within the last few series, the articulation scheme has dramatically improved. Lee actually has a bit more articulation the standard WD figure thanks to waist articulation. That allows him to sit down correctly and twist and pivot. Naturally it aids in posing tremendously.

As with the entire line the knee and elbow range of movement needs to be better. They have too limited a range to really sink in deep poses and action shots. 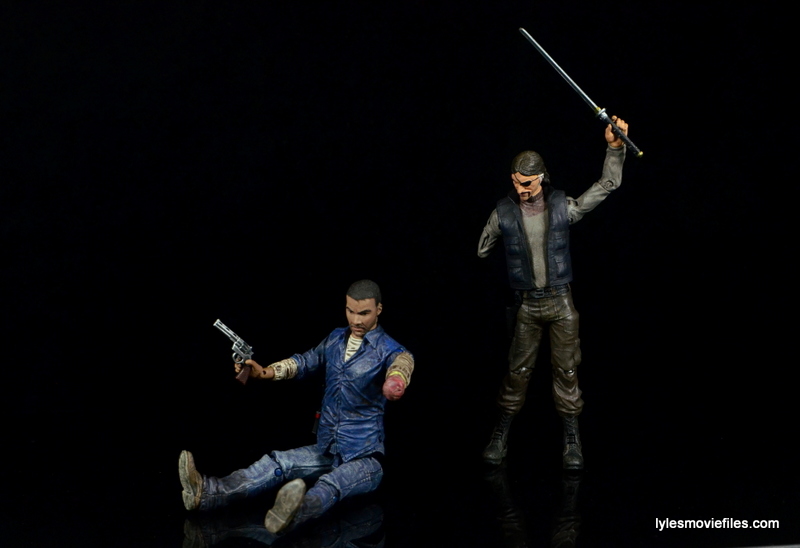 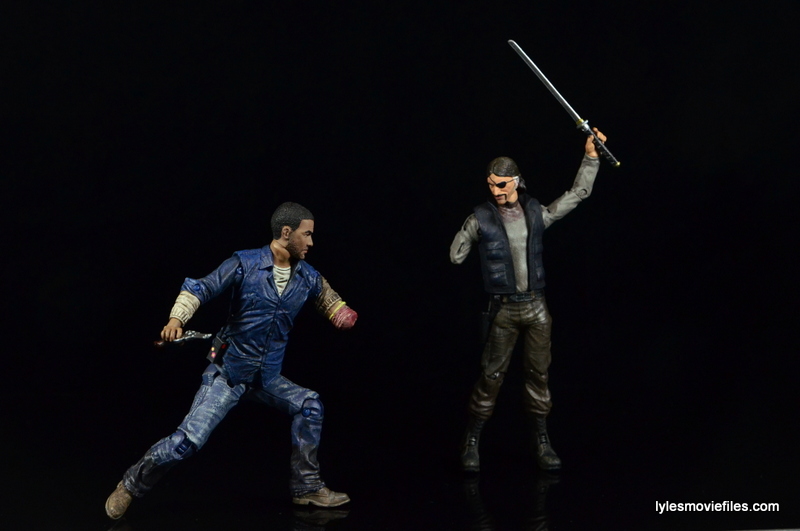 Accessories:  McFarlane Toys always packs as many worthwhile accessories in their figures and Lee definitely is no exception. He comes with Clementine’s Walkie-Talkie, a pick axe, a cleaver… and a separate left arm with the hand chopped off. The arms swap out easily enough. It has a snug fit when it’s firmly connected, which you’ll need to do to avoid it popping out. Both the cleaver and axe fit nicely in Lee’s hand.

Worth it? For Telltale Games fan, this is essential. If you’re a Walking Dead fan having another addition to the ranks is hardly a bad thing either. I’m desperately hoping we’ll eventually see more game characters made into figure form. Hopefully we won’t have to wait until next year to see Kenny, Christa, Duck and Molly. 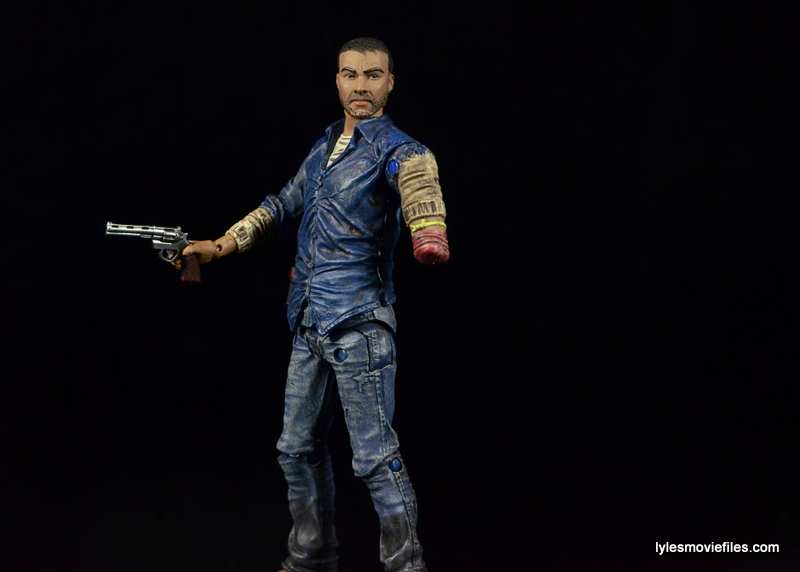 Lee is a darker skin tone away from being the best figure in the entire WD line. This is definitely a figure those with painting talent could finish getting him across the finish line.

Where to get it? If you weren’t at NYCC and grabbed a figure from the Skybound booth, you’ll be able to pick him up later on this year at The Skybound shop.