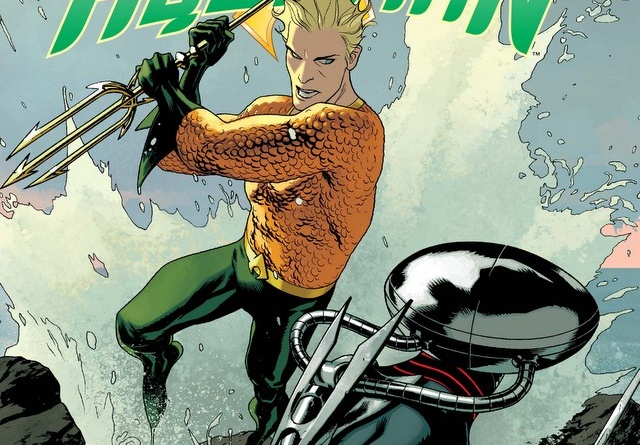 Following an action packed first two issues, writer Dan Abnett slows things down to let the story breathe with Capitol Crimes. It was a very smart choice. The fallout from the Atlantean Embassy attack warranted more than a quick throwaway mention. 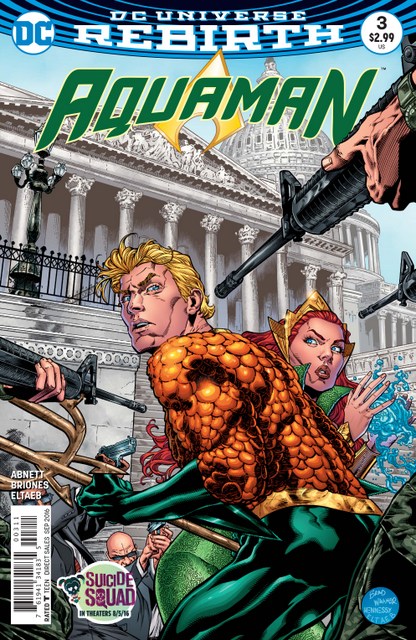 The action has been great. But it’s in this issue that Abnett reminds readers Aquaman offers compelling political drama unlike any other hero. That’s made all the more obvious when Aquaman has to pull his head of state card to get a meeting at the Capitol City. The trick is Abnett doesn’t get too bogged down with sessions and diplomatic discussions. He puts the reader in Aquaman’s position trying to navigate a sometimes inconsistent legal system.

Although his blood feud with Aquaman may be halted temporarily, Black Manta remains a factor in the title. His rescuers from last issue have a proposition for him that doesn’t include settling scores with Aquaman. This new potential threat seems like it could get the slow burn treatment before encountering Aquaman.

For the third issue in the series, Aquaman has another artist — Philippe Briones — handling art chores. From Brad Walker to Scott Eaton to Briones, Aquaman’s artist roster is the deepest of the DC Rebirth titles. The transition in artists is seamless. Briones is another solid complimentary pick for the art chores. 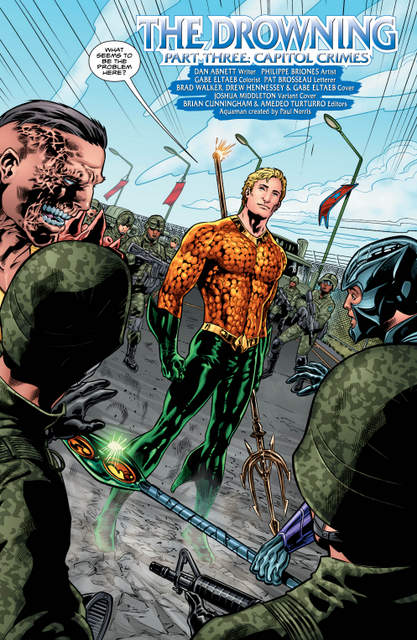 In this more dialogue heavy issue, Briones’ skill with expressions and character posing prove vital. They’re especially crisp in the Aquaman/Mera scenes.  Briones conveys the feelings and connection in an easy to comprehend manner.

Abnett shows a solid grasp on the dynamic between Aquaman and Mera, with the latter giving some great lines. Mera has been presented well. She’s not the doting love interest or sidekick. Instead, she’s a woman that no matter the circumstance will stand by her man. As the issue unfolds listening to the orders of Atlantis’ ruler creates some conflict in that regard. 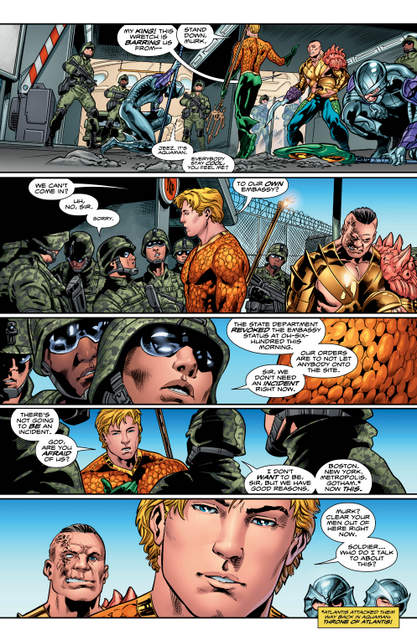 Aquaman hasn’t had an off issue yet. Even with the shift from the action-oriented feel, it remains a reliable DC Rebirth title. At the midway point of The Drowning Circle, the storyline hasn’t lost any steam.