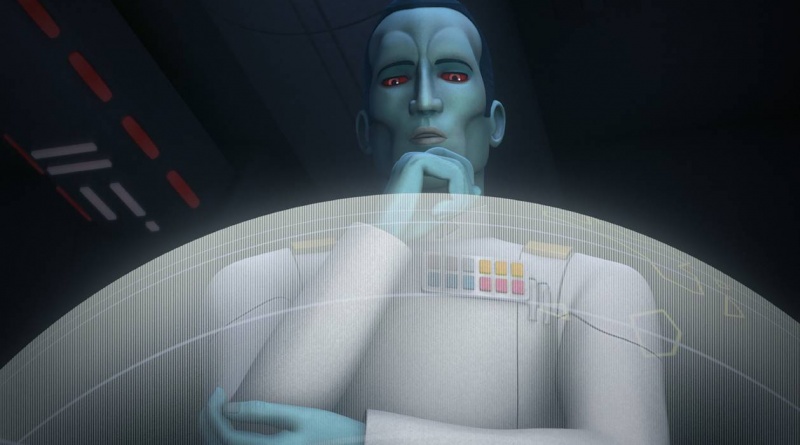 I never really ever get out of my constant excitement for Star Wars. It’s a pretty great time to be a diehard of the franchise. Disney XD just revealed the latest teaser for Star Wars Rebels Season 3, which continues the adventures of Ezra and company.

Having established a secret base on Atollon, the Ghost crew, now led by a more powerful Ezra, strengthens the rebel fleet by acquiring new resources and recruits eager to stand against the Empire.

However, the Imperial efforts to eliminate the rebellion are now being led by the coldly analytical Grand Admiral Thrawn, whose strategic, tactical and cultural insights make him a threat unlike any they have faced before. In season three, Ezra and Sabine take on new roles and challenges as the rebels prepare for their biggest mission yet – a direct assault on the Empire.

I can’t wait to see how Thrawn is incorporated into the show. If done right, he could be a major player going forward in the series. I’m always wondering if Disney won’t do another series based on the post Return of the Jedi exploits of Luke Skywalker, Princess Leia, Han Solo and the others.

I know the Expanded Universe has been effectively wiped out, but if Star Wars: The Force Awakens was any indication, some of those themes and plot elements could still find their way to become official cannon. Thrawn’s encounter with the Rebels definitely should be a part of that and it could all begin here.

What do you think of this new teaser trailer? Excited for Star Wars Rebels Season 3 or do you not need any more hype and just wait Sept. 24 to finally arrive?

For those who prefer to binge, Season 2 of Star Wars Rebels will be available Aug. 30 so you have plenty of time to get caught up.