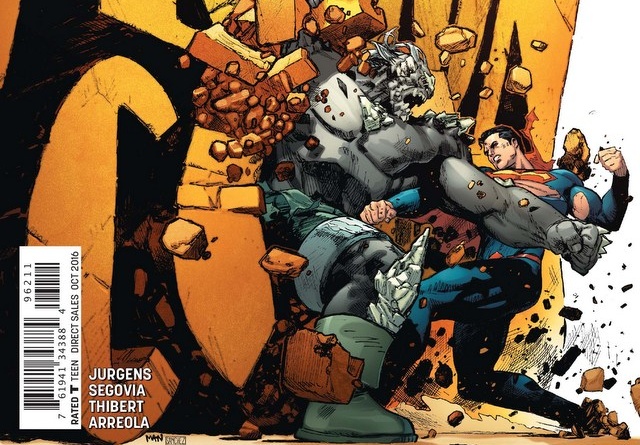 After an altogether too lengthy five issues, Action Comics #962 marks and end to Path of Doom on a high note. There are spoilers in this review.

Considering the extended battle, Superman’s solution for dealing with Doomsday is a little too easy. And if it were just as simple as bringing Doomsday to his homemade Fortress of Solitude and sending him to the Phantom Zone, why didn’t Superman do that right away? Seems like a lot of property damage and loss of life could have been prevented from Superman doing that in the first place.

Writer Dan Jurgens had the right idea with the payoff, but off with the execution with this dragged out story arc. A better approach could have just had Superman’s allies Wonder Woman and Lex Luthor delay Doomsday while he made the Phantom Zone projector. Instead, Superman looks silly for slugging away with Doomsday, putting himself and family at risk, when he had a means to stop him all along.

One major asset to the finale was artist Stephen Segovia. While the story arc has seen a carousel of artists, Segovia’s work immediately stands out. 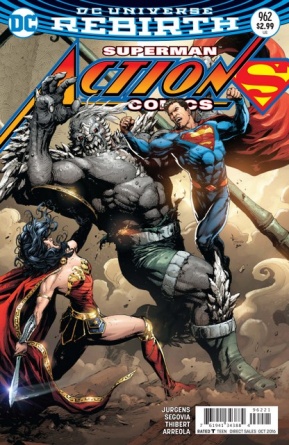 Segovia quickly makes the case he’s the artist who should have been handling this entire arc. His panel layout is dynamic bringing a widescreen sense of action that’s been missing in previous chapters. The characters look heroic and there’s a greater sense of movement in their poses.

With the story so light it needed strong art to compensate. Segovia is that artist and going forward, I’m hoping he does more work on Action.

Jurgens resumes Action’s most promising angle — Superman and Lex Luthor sizing each other up — with the hint that it will remain a crucial aspect of the series. With Doomsday defeated it’s time to see what else Jurgens has in store for Superman. Path of Doom’s conclusion was an encouraging step in the right direction.