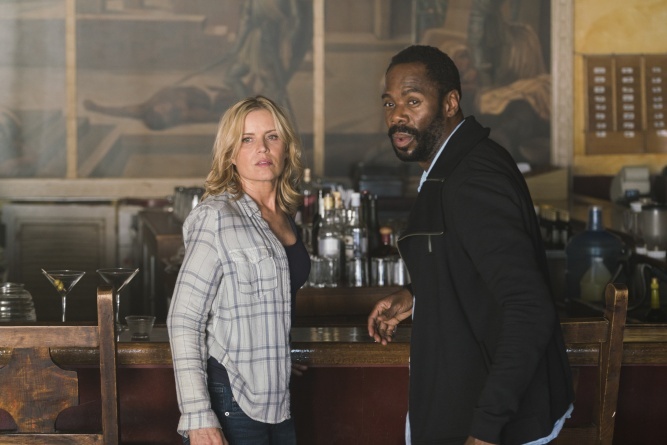 Los Muertos is another Just Surviving Stupidly moment for FTWD

Stupidity is a far deadlier killer than walkers on Fear the Walking Dead. That’s typically a bad thing, but in Los Muertos, at least the idiotic behavior led to an entertaining episode.

Nick quickly acclimated to his new surroundings. This group feels a connection of sorts with Los Muertos (The Dead) since their leader Alejandro (Paul Calderon) was bitten by a walker and didn’t turn. Occasionally, the group sends someone over to test their faith by walking into a walker-filled area. So far there haven’t been any survivors. This seems more like a way for Alejandro to thin the ranks especially with supplies like water and medicine running out.

Alejandro’s second-in-command, Luciana (Danay Garcia), brings Nick along on a supply run. I liked the concept of gangs controlling supply warehouses. For the entrepreneurial type, setting up shop around a Costco is absolutely the best way to have a measure of power. Nick sneaking a snack was pretty dumb, but he was smart enough to convince the gang leader the medicine from Alejandro’s camp would be cut off if he was harmed. And he managed to get an extra cart of supplies to boot. It was a bit of a gyp we didn’t see how Nick and Luciana got shopping carts of supplies past the walkers though.

Madison, Alicia, Ofelia and Strand were driving around in search of Nick, Travis and Chris. That’s certainly one ineffective way to keep the characters in a holding pattern. Strand and Alicia finally convince Madison they’re a party of four now just in time to find Abigail was stolen.

Having the crew lose their boat via military thieves was a cop-out. That was a major advantage in this walker world and one that’s hard to picture Strand losing. He’s always been one of the more logical characters on the show.

Animating the boat was probably costly, but with this crew was there any doubt they couldn’t find a way to stumble onto disasters even at sea?

Alicia’s newfound resolve and confidence was jarring. It came across like the writers assumed we’d forgotten how naively and incompetently they’d written her the first half of the season.

This was the same character that just a few days ago (in show time) was crushing on a cute sounding boy and giving away their coordinates. Alicia’s maturation could have developed more gradually, but making her competent overnight felt like a cheat. Ofelia sounding more and more suicidal has potential assuming she doesn’t immediately get killed off for a shock.

The not so fantastic four came upon a massive hotel resort. I always love when FTWD finds new locations Rick and his crew haven’t encountered. One group shacks up in a prison while the other sets up shop in a hotel. I like it. 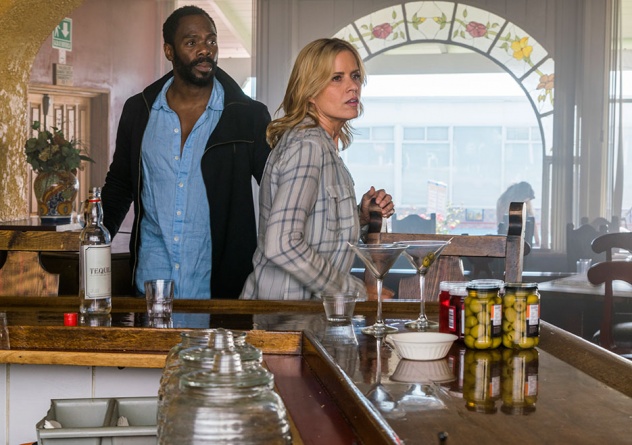 Or I would if Strand and Madison didn’t decide to get hammered. Madison shares that she lied to her kids about her husband’s death. He wasn’t tired and his car veered into oncoming traffic — he was just suicidal. That helps give Nick some extra context and explains Madison’s severe case of over-protective-itis.

This was a good moment between the two that immediately got derailed when Madison decided to start chucking glasses from the bar. Strand joined in on the phone by loudly playing the piano. That was more than enough incentive for the nearby walkers to stop by for a visit. Even the walkers on higher floors were lured to the sound and leaped off their balconies to follow it.

The walkers have never been especially agile or smart enough to climb over obstacles. While it made for a cool visual, this was definitely a departure from the walkers’ norm. And if they could climb, why didn’t they hop on the Dumpster to get Glenn or get on top of the car to get Nick just last week? Playing fast and loose with walker rules is going to get the show in trouble.

And as usual for the show, it’s almost always the characters’ fault for their predicaments. Losing Abigail was one thing, but losing a luxury hotel with beds and hot water? Just another dumb move for a crew that specializes in them.

Los Muertos oddly had a mid-season cliffhanger feel to it. Nick was rapidly buying in to Alejandro’s spiel, Alicia ran into a swarm of walkers in the hotel stairwell with Ofelia nowhere in sight and Madison and Strand were surrounded by walkers at the bar.

Next week: Travis and Chris return. That can’t possibly turn out bad, right?