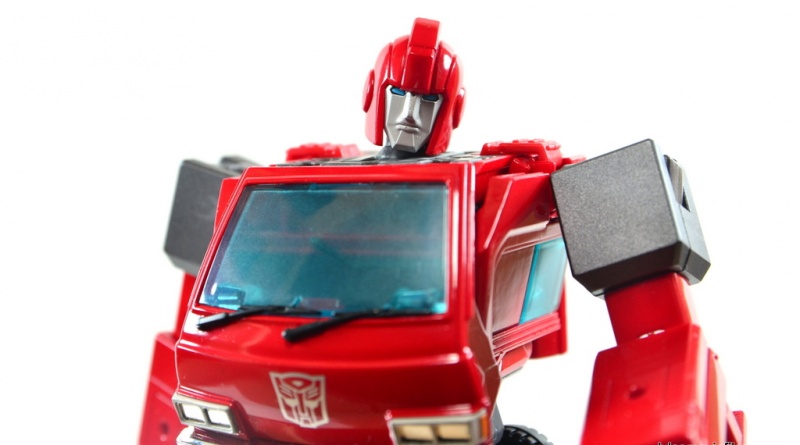 I am so happy to own the Transformers Masterpiece Ironhide. Growing up in the 80s offers great perspective on figures. I was around for the Golden Age of G.I. Joe, Star Wars, M.A.S.K., Masters of the Universe and Transformers.

Of the main lines, Transformers also proved the biggest letdown. The figure versions rarely came close to matching the characters I watched every day after school. That’s why I have a special appreciation for the Masterpiece line. I finally have the Ironhide figure I’ve wanted for 30 years thanks to Takara Tomy’s efforts.

Packaging: If I spoke Japanese, I’m pretty sure I would rank Takara’s packaging job pretty high. There definitely seems to be a bio and extensive write-up on the accessories and figure details. And plenty of pictures.

For us English only speakers, the box still manages to showcase a majority of the features. There’s a nice sheen on Ironhide’s robot and vehicular modes on the packaging that just looks cool.

Likeness: As Ironhide is one of my favorite Transformers, I picked up the iGears version Masterpiece scaled figure. That figure did the job well enough, but the Masterpiece is far superior for those seeking a more cartoon-focused appearance. 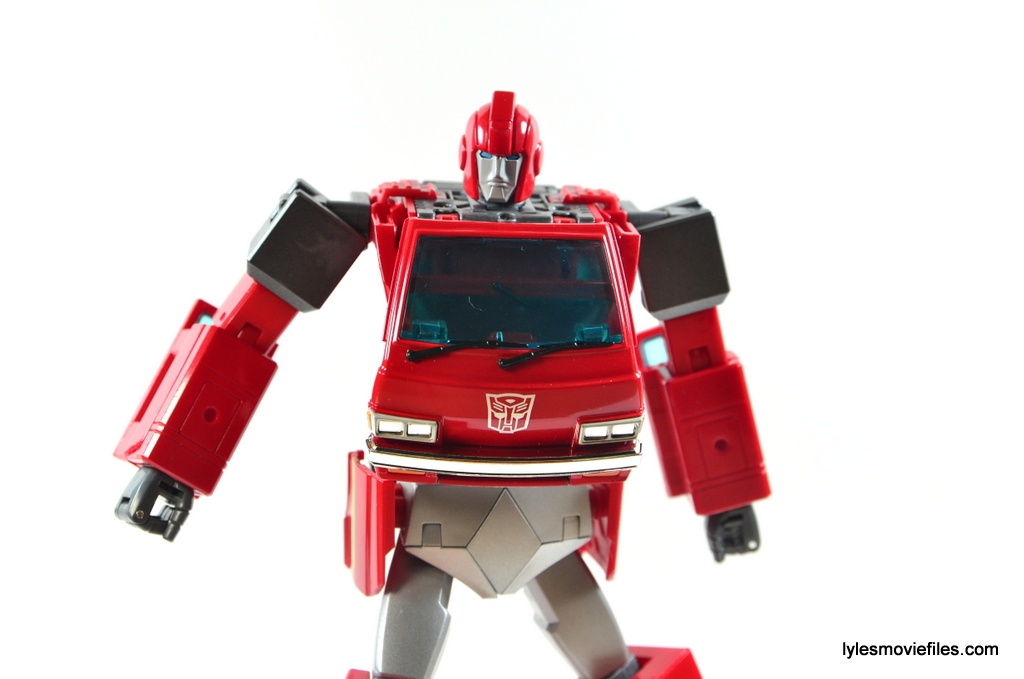 Ironhide sports a stern, focused expression like he’s ready to smash some Decepti-chop. He looks nice and imposing, which is fitting for the Autobot enforcer. 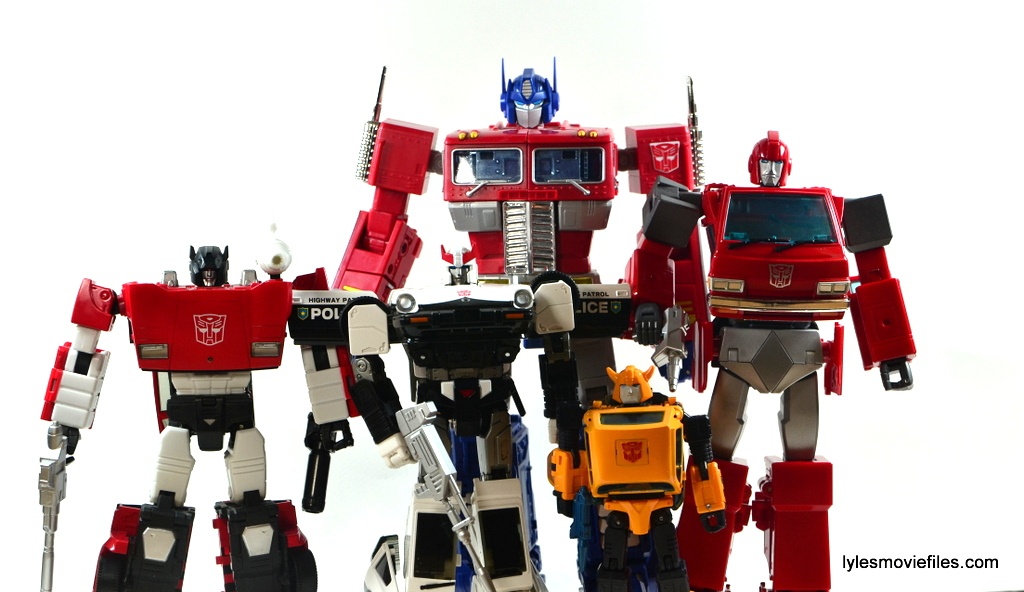 Scale: Scale was another luxury us old school Transformers couldn’t enjoy. Takara again gets it right. It’s hard not to be impressed with the attention to scale with this line. Ironhide is significantly taller than regular car characters like Prowl and Sideswipe, befitting his larger size.

Vans are taller and wider than standard cars after all. Just as impressive, Ironhide is still shorter than Optimus Prime. Takara really set up a nice scale with the line and has been great about sticking to it.

Paint: Ironhide gets a nice strong red paintjob. It’s not the striking candy apple red as Sideswipe and is more of the soccer mom mobile. There’s solid detail work like the silver rails, dark yellow reflectors and the show appropriate varying shades of grey. Ironhide is one of the bigger Transformers so we get a better glimpse of the bright aqua blue used for the Transformers’ eyes. 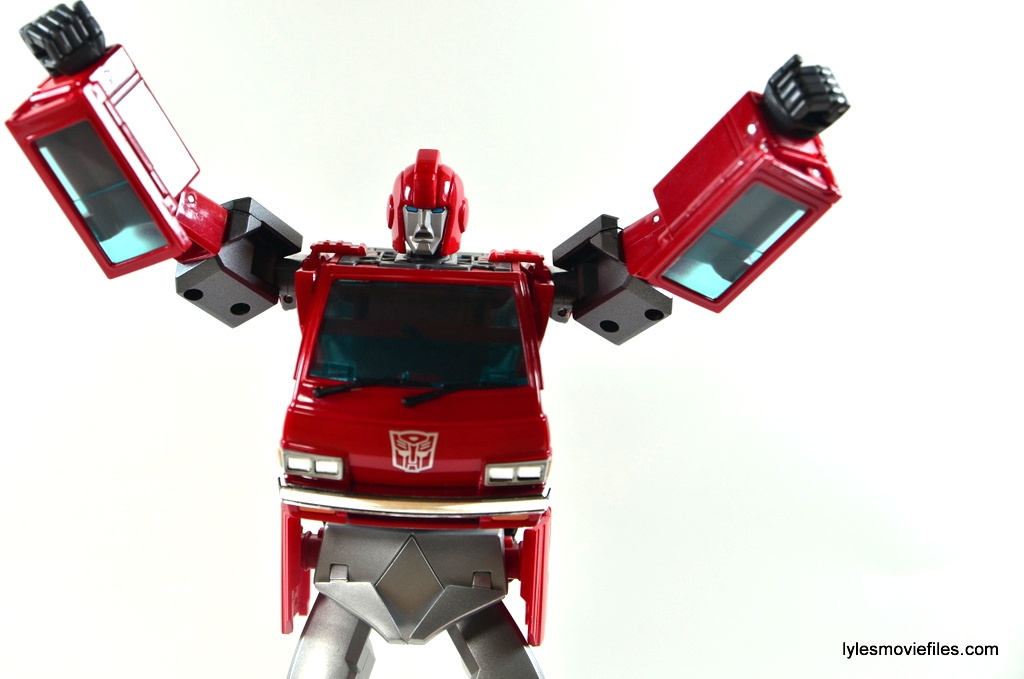 Articulation: Your days are numbered now Decepticreep. Like Bumblebee, Ironhide has pretty amazing articulation. Takara engineered a flap at Ironhide’s torso, which raises up allowing for more clearance when the legs are moved forward. The shoulders have a well-executed ratchet system that offers a lot more movement than usual.

Ease of Transformation: Ironhide’s leg mechanics are the trickiest aspect. It’s one of those deals where the more I transform him, the easier it will be. It’s not so complex that I’ll need to consult YouTube every time…I hope. 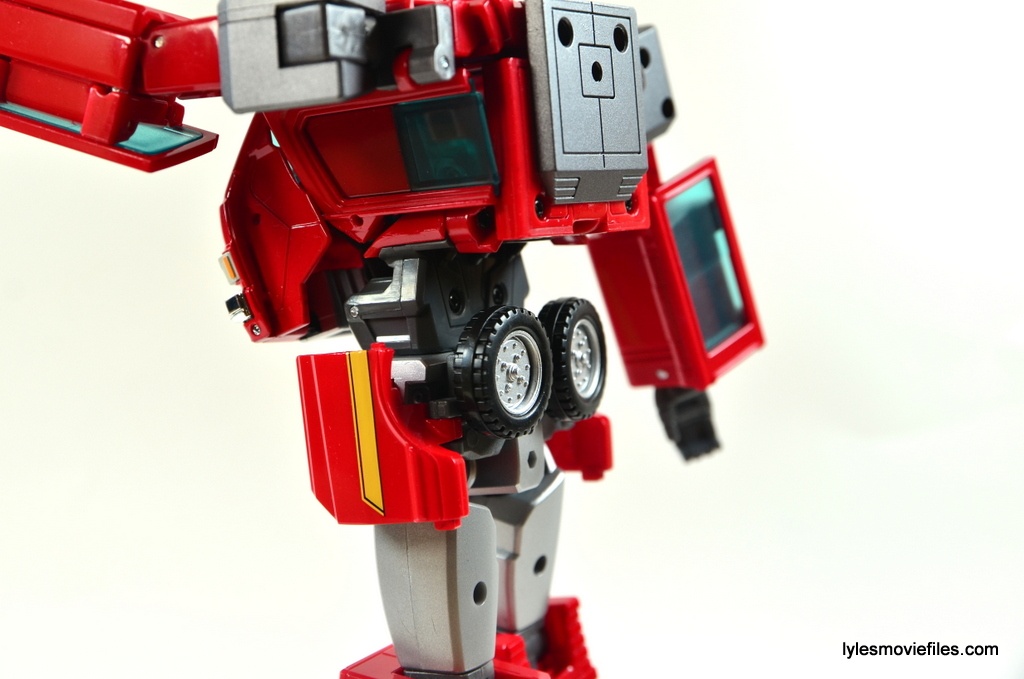 His van mode also seems scaled properly. The plastic tires allow for smooth rolling out. While I doubt most collectors will keep him in van mode it looks great all the same. 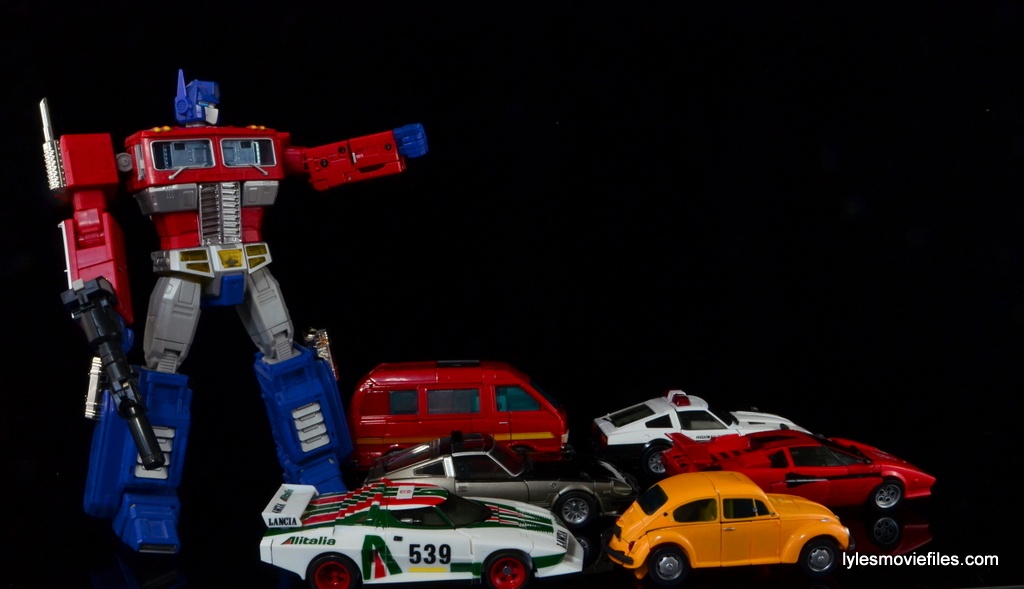 Accessories: In case you were feeling slighted somehow, Takara goes overboard to ensure you get your money’s worth on this front.  The original toy had a sled piece, which was necessary in some cases to keep the figure standing. Takara pays homage to that with a separate sled attack piece that doubles as a weapons cache.

You’ll need most of those slots as Ironhide is loaded with an arsenal. He’s got two pistols. That’s a nod to the childhood traumatic scene from Transformers: The Movie.

The rocket launcher plugs into the figure’s back. Thanks to a rotating base, you can position over either shoulder. That’s tremendous attention to detail with an eye for playability.

Ironhide frequently swapped his hands out to spray various liquids. Takara provides two options for this with a set of spraying fingers, two circular spray nozzles and two flatter grey spray nozzles. These swap in out nicely. The fists rotate inside the figure so you won’t need to take them off. 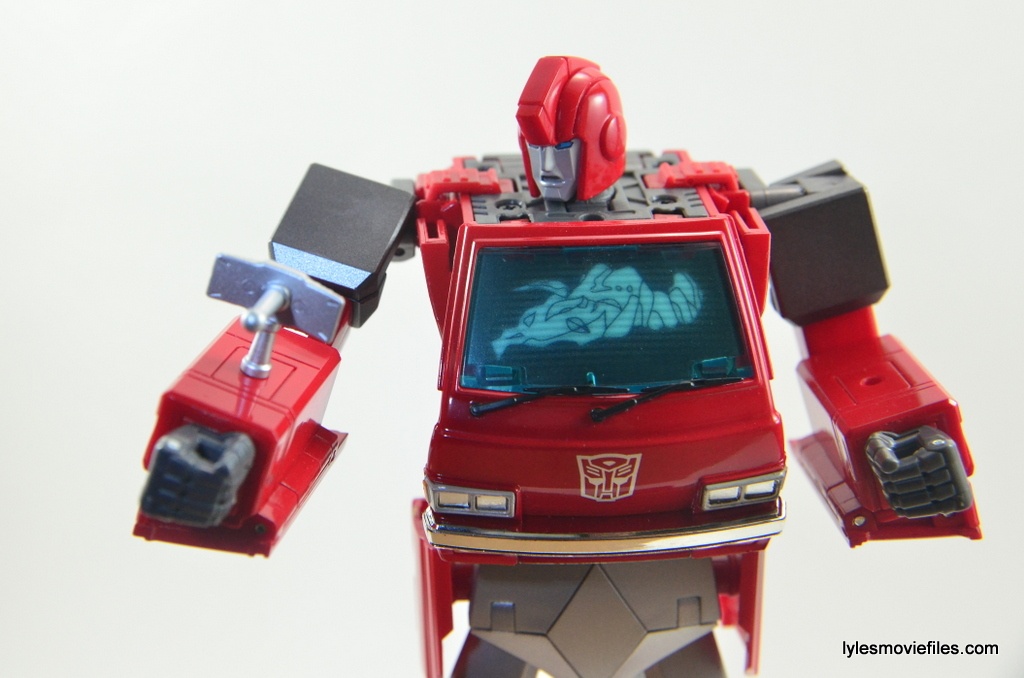 Pull the windshield back and you toss in the paper insert with dinosaur bones. That’s homage to the episode where the Autobots get the bright idea to make Dinobots. Ironhide also has a sensor, which plugs into either forearm.

But that’s not all. Ironhide’s also got a jet pack with flame exhausts. And he comes with a gun torrent that fits atop the van. Not enough display options? There’s also an alternate face plate. This is better suited for specific battle scenarios, but I love having those kinds of options. 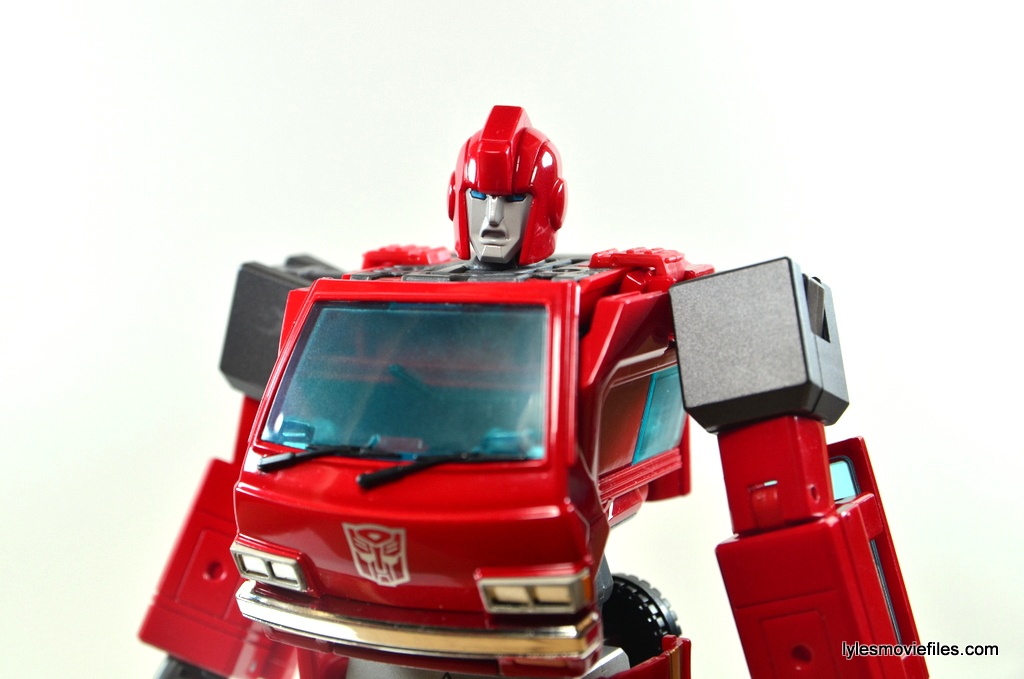 Worth it?  Ironhide will run you about $90. The Masterpiece line is not cheap and Ironhide runs about $15 to $20 higher than the smaller cars. Here’s where being an old school Transformers fan comes into play. Paying $90 to get a cartoon likeness with spot on vehicle transformation and a slew of accessories doesn’t sound like a bad deal at all. 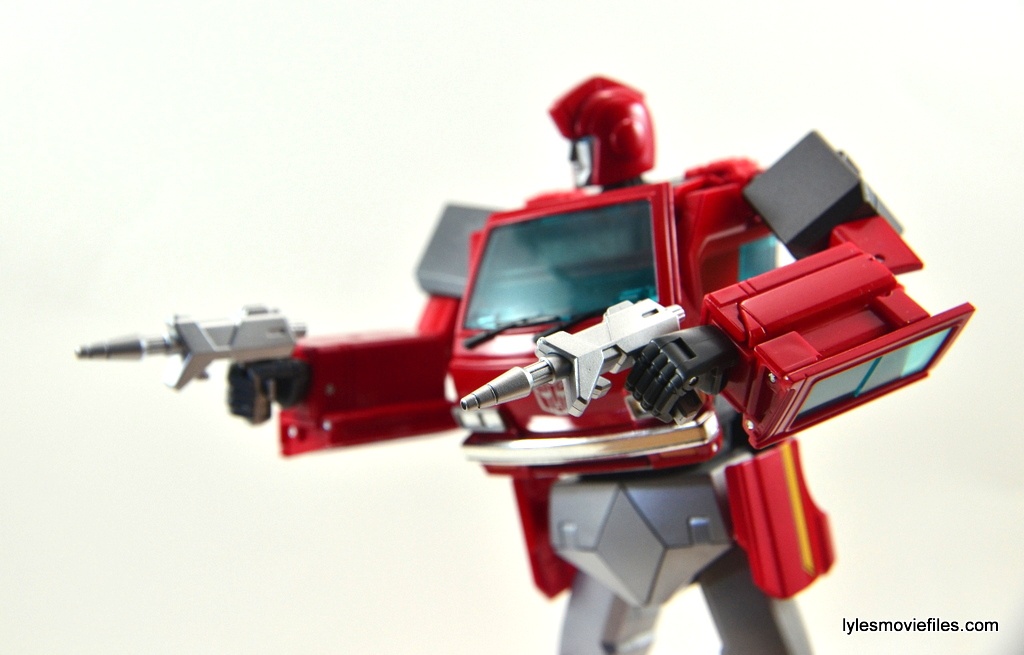 Younger collectors can’t fully appreciate the disappointment of the 84 versions of Ironhide and Ratchet. Imagination can only cover but so much in that regard. This is probably one of the few instances I’m feeling like I’m getting over for only paying close to $100 for a figure.  Catch eBay on the right day and you can get Ironhide for about $73. A fantastic price for this figure, just be sure it’s not the Knockoff version.

Where to find it?  Online is the best way to go. Amazon has them in stock as does BigBadToyStore. 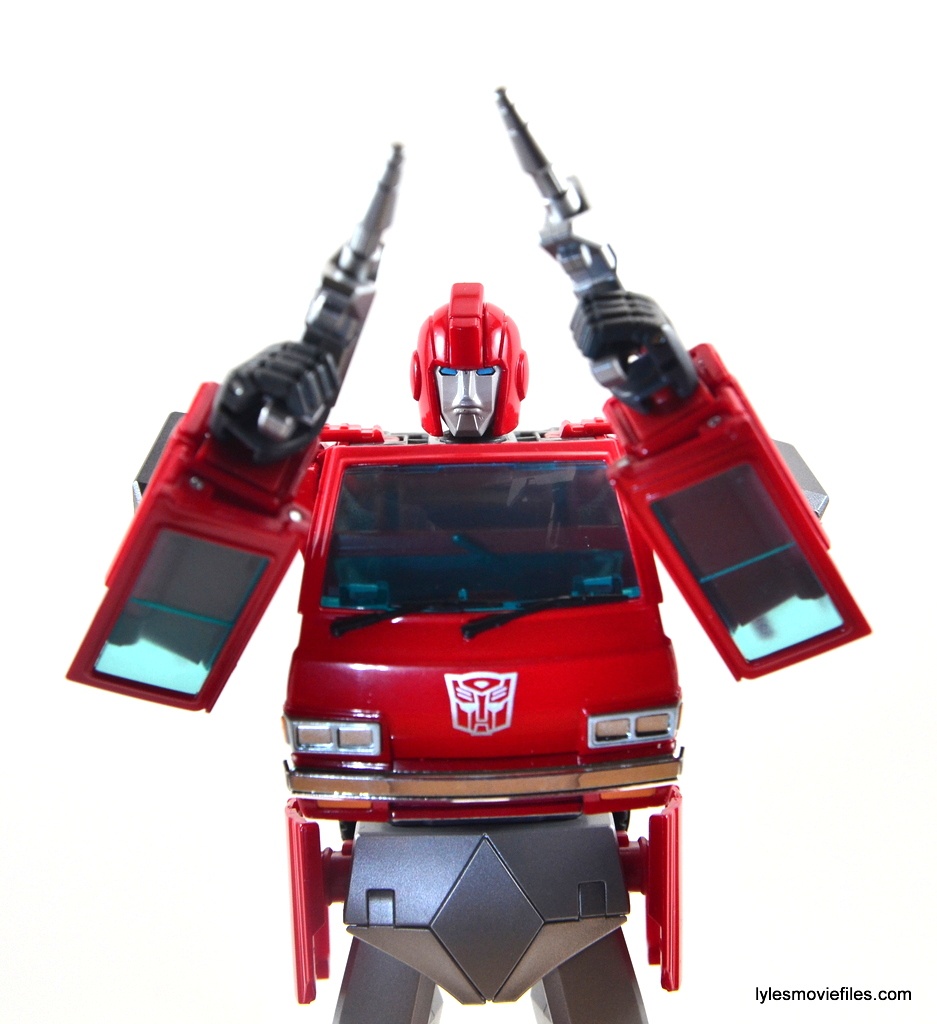 Takara keeps delivering iconic takes on classic Transformers. I’m not going to need another Ironhide for my collection.