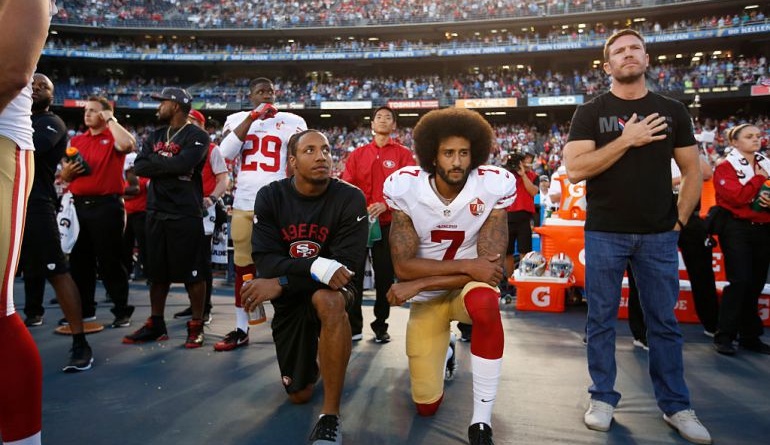 Pretty sure my bias for the 49ers has been well documented at this point. It seems like decades since my squad was atop the NFL as one of the premiere teams under Jim Harbaugh. But I’m tremendously proud to see a 49ers player making headlines for a good reason.

You’ve had to been in a cave without access to even carrier pigeons to not heard about the Colin Kaepernick saga. Kap’s decision to sit — evolving to taking a knee — during the National Anthem to draw attention to racial inequality and the treatment of minorities by police officers. It’s become a national story more so from some perceived slight to the military than the issues Kap addressed.

Not surprisingly given the current climate of the country, the backlash has been insane. Internet comments — the most polite of which labeling him a ‘thug’ — have explained why Kap’s actions are so necessary.  Blatant racism is terrible, but the casual racism going on currently might be worse.

Kaepernick didn’t do any of this to raise his stock — currently he’s second string behind Blane Gabbert — but the conversation he wanted to spark has already been a success. And people are noticing and letting Kaepernick know he’s not standing alone.

Soccer star Megan Rapinoe has been the first white sports star to take a knee in support of Kap. Now players throughout the league are taking a knee as well. From a pure football perspective, I’m all kinds of conflicted that Seattle Seahawks have shown their support. Clearly this is bigger than football team rivalries. Even more tellingly, Kap’s jersey shot from No. 20 on the 49ers to the NFL’s top seller.

I get the feeling this could be one of those iconic moments in history that we look back on decades from now as a turning point in improving race relations. And it’s the kind of image ideal to commemorate.

McFarlane Toys has made high quality NFL figures for decades. I’ve got a ton of their 49ers figures and I even asked McFarlane about making more at last year’s New York Comic Con. Here’s a crazy thought: it’s time for a new Kaepernick figure to reflect this highly discussed moment in NFL history.

Considering the jersey sales, McFarlane Toys could find a taking a knee Kaepernick figure to be one of its best sellers.

Besides a new head sculpt featuring Kaepernick’s amazing Afro, McFarlane wouldn’t have to do too much. They’ve already got a kneeling player mold with the Indianapolis Colts Andrew Luck figure anyway.

It seems absurd to consider making a figure for a backup QB. I’m definitely not convinced Gabbert can hold the starting job all season. And in that case it’s not too soon for McFarlane Toys to get a jump and start working on the figure.