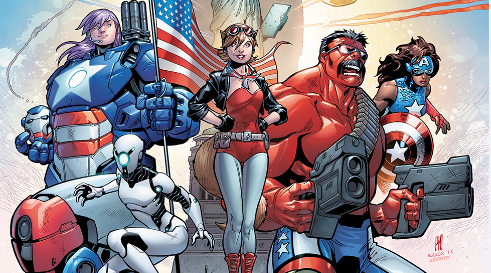 Marvel revealed a pretty cool gimmick for its U.S. Avengers title — an Avenger for every state.

To kickoff the series, Marvel is releasing more than 50 variant covers with a different Avenger assigned to each state. This is kind of like an auto draft for fantasy football draft. Fortunately, Maryland got one of the top picks with Sam Wilson Captain America. Over in California, Iron Man fittingly represents the Golden State. Spectrum gets Louisiana while Black Widow protects Connecticut.

The security of the Marvel Universe is fractured. The world’s first line of defense, S.H.I.E.L.D., can no longer be trusted. The United States no longer has a super-spy agency with its best interests at heart – until now. Prepare for the U.S.AVENGERS!

‘Marvel’s U.S.AVENGERS State Variants are a chance for our fans and retailers to show their home town patriotism paired with some of the biggest Avengers from the Marvel Universe,’ says SVP Sales & Marketing for Marvel, David Gabriel in a statement. ‘We knew that a series with the name U.S.AVENGERS would evoke a sense of honor with all of our fans and we really wanted to go that extra step and offer a variant campaign that would allow our readers to show their hometown pride across this great nation – even our neighbors Canada and Puerto Rico! Expect their own variants as well.’

The covers will connect to form the United States’ flag. Pretty neat patriotic gimmick there. Considering Marvel likes to get ahead on buzzy topics, I’m curious if any writer will attempt a Marvel spin on the Colin Kaepernick/National Anthem controversy. Seems like an ideal fit for U.S. Avengers. Especially given the current climate going in regards to race. Marvel has definitely done its part to force readers to consider diversity and inclusion with the introductions of many more diverse characters in its roster.

Writer Al Ewing will be joined by artist Paco Medina. Rod Reis will be tackling the state variant cover art.