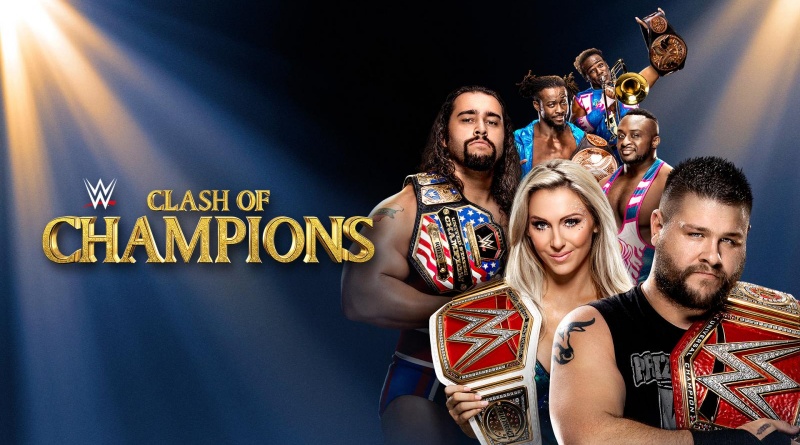 After the undeniable success of SmackDown’s Backlash, Raw looks to offer their own brand exclusive PPV in the form of WCW-nicked Clash of Champions to stoke the rivalry. With a bevy of championships on the line, Sunday night is sure to provide entertaining angles and fun matches. This is a tremendously well-rounded card and I am very interested to see how the Clash plays out. 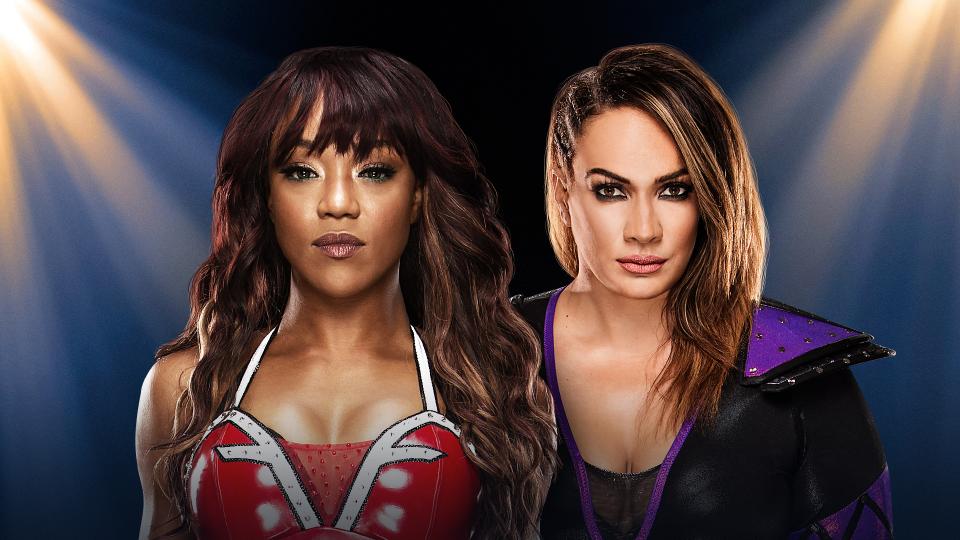 In a match produced by a single back stage confrontation, Nia Jax has her PPV debut! Alicia is as reliable a hand as one could be in the women’s division, and a true opponent for Nia is warmly welcomed. The theme of the night is vets putting over new talent. Don’t expect this duel to last longer than five minutes. 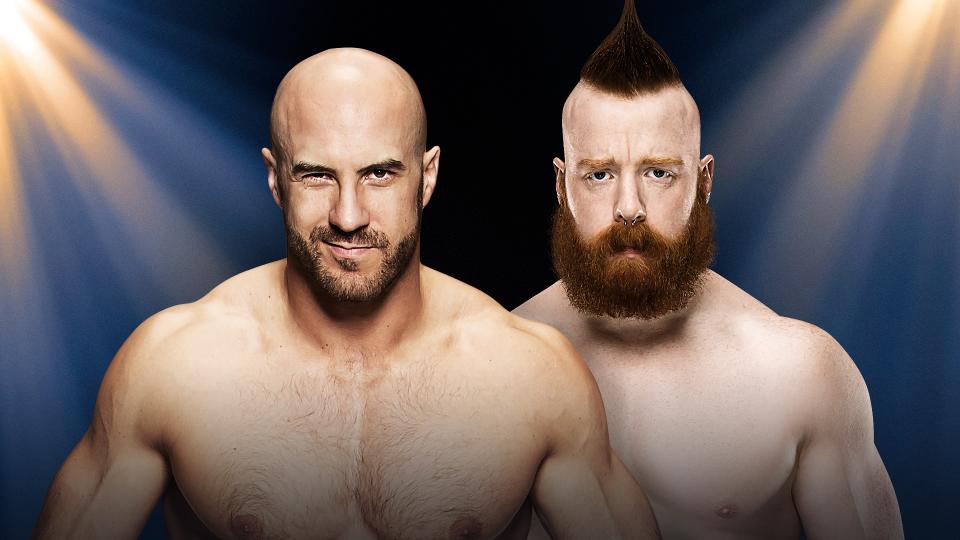 Quality in-ring action, minimal storyline chicanery. While the past six encounters have not been especially barn-burning, the rubber match has piqued the interest significantly. Whether it be Sheamus or Cesaro, both men can see gains from this grueling feud. It has been mentioned that the winner could see a shot at a championship to be named. The two have fought terribly hard for a chance to shine and both could do well with a title shot, or even a title run. For my pick, personal bias rules the day.

The New Day (c) vs. Gallows and Anderson
for the WWE Raw Tag Team Championship 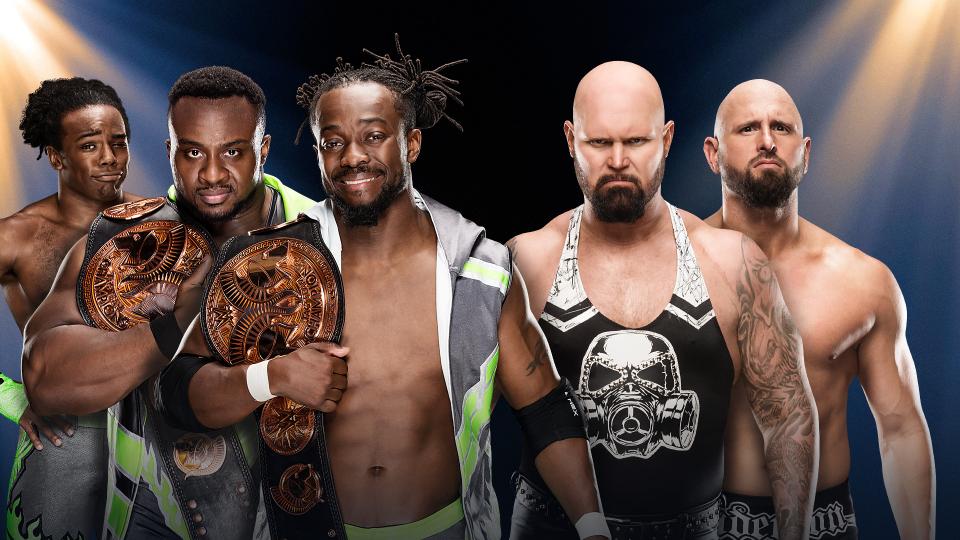 I truly adore both of these teams, but I beg for something, anything, to freshen up this feud. Gallows and Anderson are desperately due a title win at this point, but I have a horrible feeling the New Day will find a way to retain. I am most curious about which pair of the New Day will step in the ring for this, but I have sneaking suspicion Xavier will be left out. Gallows and Anderson, if the WWE creative team really believes in them, very much do need a true sign of strength. The average WWE fan cannot rely on knowledge of the pair’s history overseas to get behind them. If the New Day comes out the victor, I cannot see this feud continuing in any meaningful way and I certainly cannot see the Club looking any better for it.

PICK: Gallows and Anderson via pinfall

Charlotte (c) vs. Sasha Banks vs. Bayley
for the WWE Raw Women’s Championship 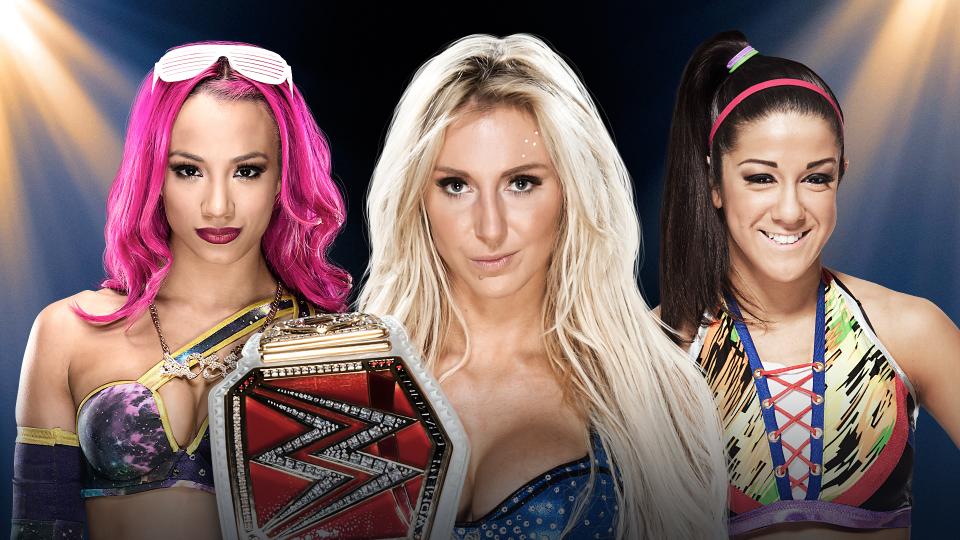 Some pinfall shenanigans have turned this once one-on-one into a triple threat! How lovely! I’m quite glad we get a little extra spice in Bayley added to the Charlotte/Sasha mix. I do quite enjoy Sasha and Charlotte’s matches, but the addition of the Hug-master will certainly make this can’t-miss TV. Charlotte has only held the belt for a month in this current reign, so I don’t believe fully that she could potentially lose it, however the triple threat dynamic means she can lose the title without looking especially weak.

All three competitors are stars on the rise and I worry about how the finish could affect the stock of each player. Charlotte with a one-month reign does not look becoming at all. Sasha back from her sabbatical has been on tear and cannot benefit in any way other than coming out the champ; this tweener attitude does not lend kindly to losses. Bayley, the perennial underdog, has had her fair share of losses the past month and yet another would only burry her further in the mountain of defeat. However, if played correctly, a redemption story could roll her way in the coming months. Everything about this match grabs me; the potential for fantastic in-ring action, the players themselves, and all the possible outcomes. I’m hard-pressed to choose, but I have no choice. 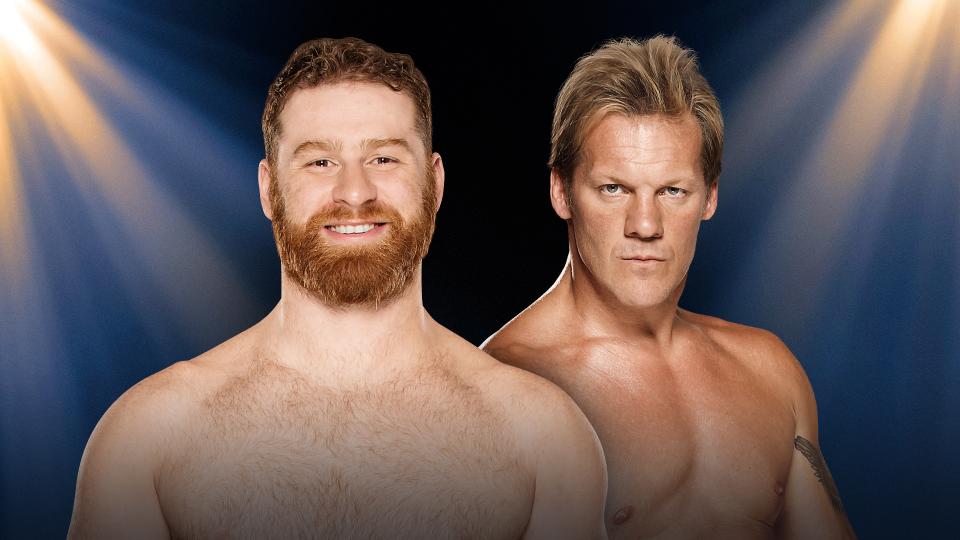 Sami Zayn was left without much of a path post-Draft, something with clear benefits and detractors alike. Sami is a bright star waiting to shine, and to risk burning him out early on is a gamble none should take. Yet, this is quite the bummer for fans of the Underdog from the Underground who want that gratification of him on top. In a mini-feud with the venerable Chris Jericho seems to be the best place for Mr. Zayn at the moment.

It’s a situation for him to shine and not risk overuse. Chris deserves all the commendation in the world for continuing to engage with and put over promising young talent. He is a legend, possibly one of the greatest of all time, and still he maintains the humility to take a loss for their benefit. There’s no doubt in my mind that Sami will be going over, but this will certainly be a contest to see as both maintain impressive arsenals and enviable technical prowess.

Rusev (c) (with Lana) vs. Roman Reigns
for the WWE United States Championship 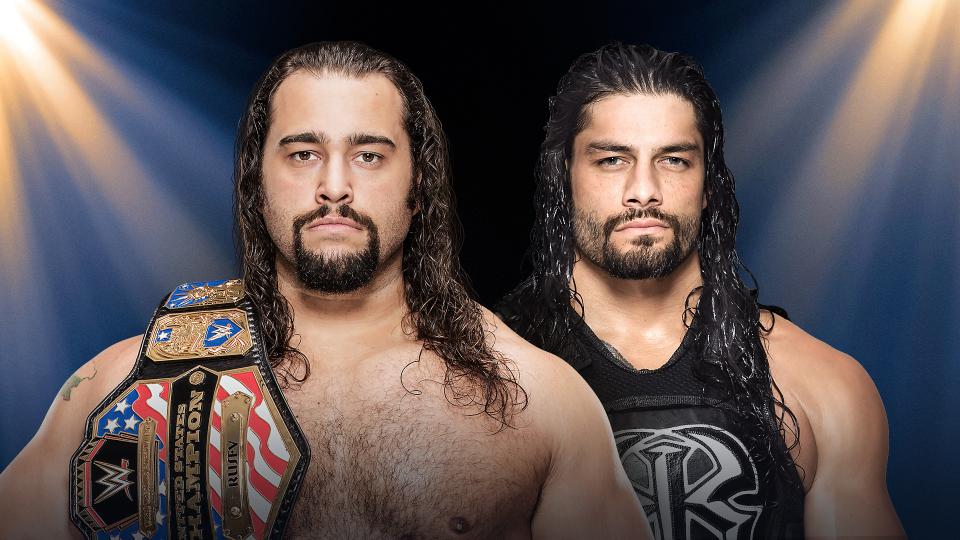 After the scare that was Roman Reigns in the Fatal Four-way for the vacant Universal Title, the Big Dog is back where he belongs; fighting for a midcard title against a strongly-booked opponent. Roman Reigns has a tremendous amount going for him, but he still lacks that uber-important crowd backing to put him truly and firmly in the top spot. Chasing down a title without tremendous opportunities graciously gifted to him is key to building support for Roman. I firmly believe extending this feud will benefit in spades for both men involved. Rusev is a glorious heel with a true gift for mic work and ringwork alike. He has proven and continues to prove that he can make Roman look especially tough and intimidating with minimal cost to himself. I expect this feud to continue on, but the finish should not risk Roman looking too weak. This match will likely end with a dirty pin of some sort or a disqualification to keep both men looking solid. 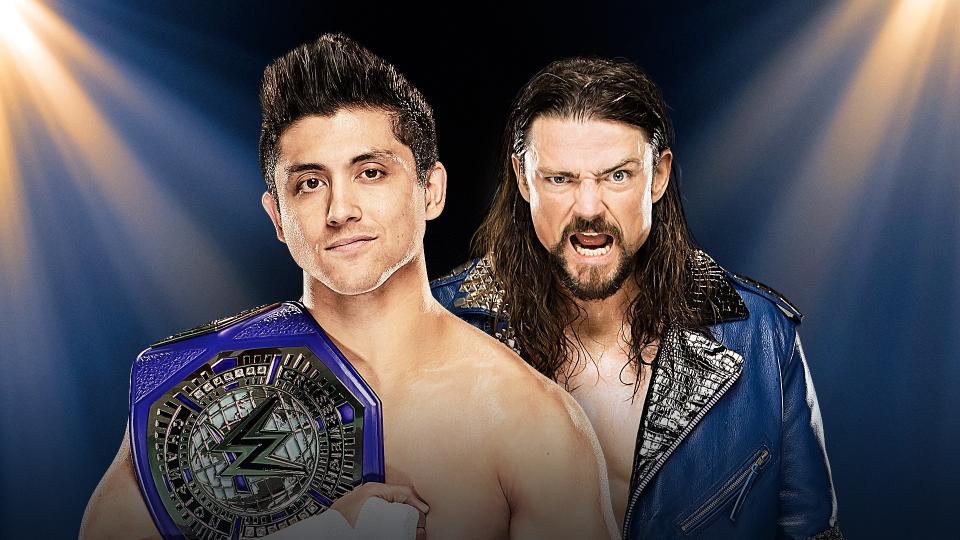 The CWC was a truly extraordinary experience, selling itself almost exclusively as a sporting contest. The in-ring majesty told enough of a story on its own, and I would love nothing more than to see this theme continue onwards as the cruiserweights establish themselves on Raw. Like I had mentioned earlier, this night is about vets putting over the young guns; look to see the incomparable Brain Kendrick make TJP look like a million bucks. Though the timing didn’t offer too fair a period, the decision to send off the title to be defended in just over a week is a bit risky in building a believable standard. Still, I can let that slide because I am just so goshdarn excited to see these folks go at it every chance I can! For those who got to witness the CWC finals, those matches will be a tall order to surpass, but pairing the new champion with one of the best cruiserweight vets in the world is definitely the right way to go. 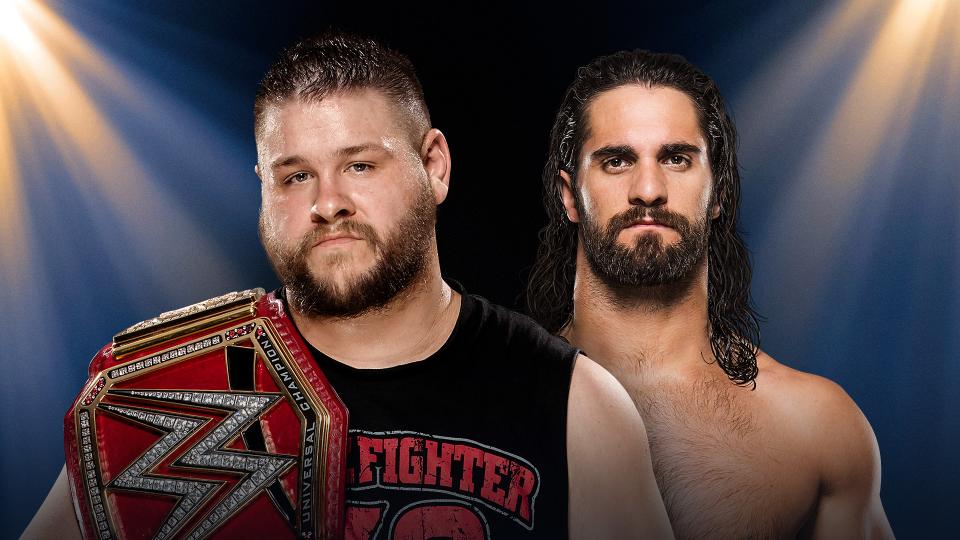 Where am I? Is this 2010? Am I watching Ring of Honor? Is this a dream? It sure does feel like the most wonderful dream I’ve ever head. The best part is, it’s true! It’s really happening! Isn’t this incredible? Yeah, it is. It’s pretty incredible. Two of my favorite professional wrestlers since all the way back in their ROH days face off for the WWE Universal Championship in a match that will, and this is a guarantee, not disappoint.

Both men have spent the summer of 2016 at the top of the food chain, proving their inimitable talent both inside and out of the ring. I really cannot manage much but pure, unapologetic gushing over these two. It’s gonna be great, ok? I promise. As far as an outcome, the Roman Reigns principle applies here. Seth Rollins gets cheered wherever he goes, whatever he does. That’s been a not-so-good thing as the WWE have been trying to sell him as a heel.

Finally, they’ve leaned into the cheers and have been marketing the Architect as more of a face in the past couple of weeks. Still, to pin a title on him so fast, especially so soon after KO’s win, is not a well-thought out idea. The cheers can be stronger, the pops can be bigger, but first Seth needs to chase down the title and not acquire it in such an instant-gratification sort of way. This feud will likely continue for some time, possibly until Finn Balor makes his triumphant return, so each match ought to be milked to its fullest potential to keep everything fresh and interesting. Could we see another surprise Triple H appearance? Yes, yes we will. There is not a doubt in my mind. Still, I don’t see a terribly dirty finish in the vein of the Four-way from some weeks ago.