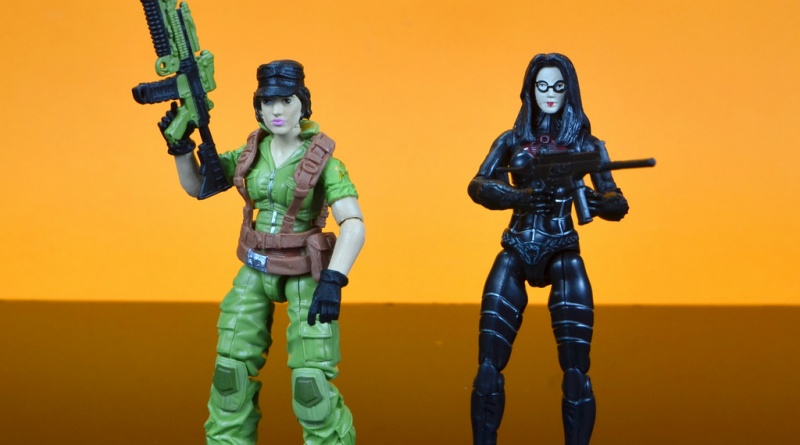 Every year around this time I’m vainly hoping for Hasbro to make some announcement detailing their plans to revitalize its G.I. Joe A Real American Hero line. Whether traditional 3 ¾ or 6” I’m not picky at this point. Since that’s still not the case, I decided to finally get around to opening my last few sets. This one features a battle of two of the main females for both GI Joe and Cobra — Lady Jaye and Baroness.

Since Flint is my favorite Joe, Lady Jaye by default is my favorite female. It helps that she was a pretty kick tail character in her own right. And Baroness is easily on the Mount Rushmore of Cobra villains. This set has the cute subtitle of Social Clash. Let’s see how it delivers.

Package:  Hasbro released this two-pack as part of the 50th Anniversary of the overall Joe line. While nothing can top the original RAH package with the explosion backdrop, picture checklist and elaborate character defining Larry Hama crafted bio, this isn’t bad.

Tying into the anniversary theme, the package features a star shaped shell against a blue and black backdrop. The Joe logo and 50 are prominently displayed. 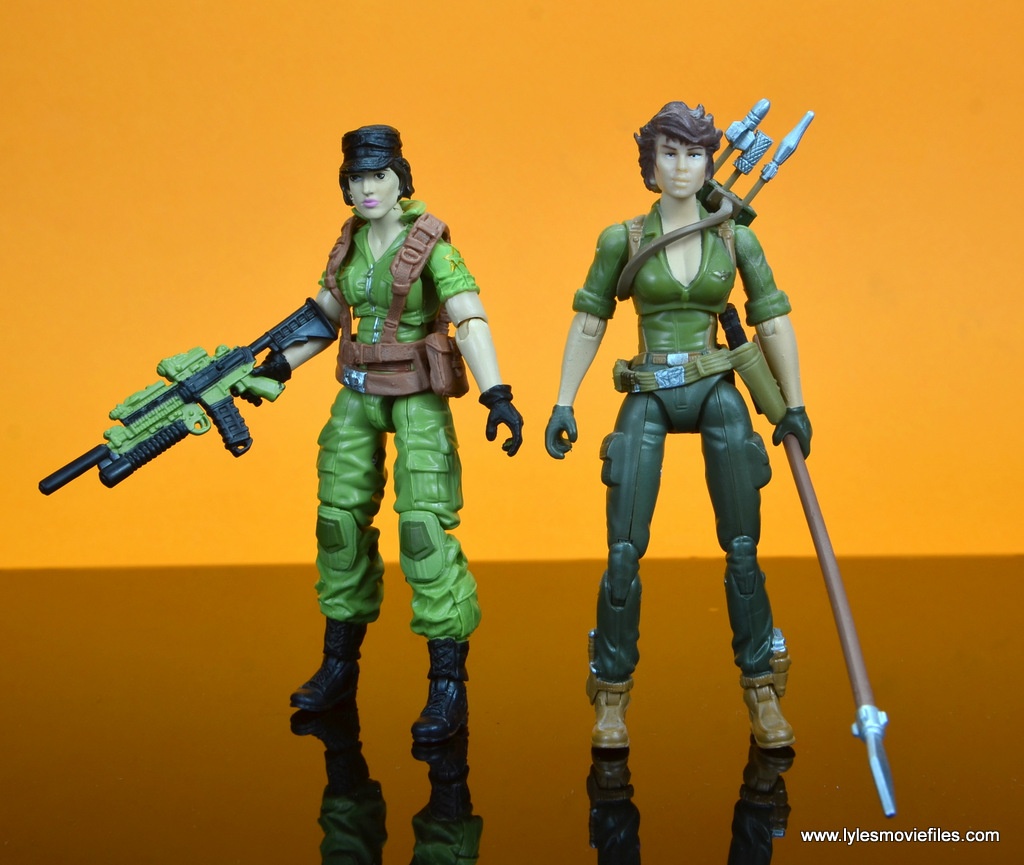 Likeness:  For Joe fans there’s only two likenesses a two has to match — the Sunbow cartoon or the comic book. During the heyday of the Joe revitalization in the mid-2000s, we got strong versions of both Lady Jaye incarnations. The first sported her toy homage with hat while the second featured her javelin-tossing look. The Social Clash version features Jaye in her toy/comic look. 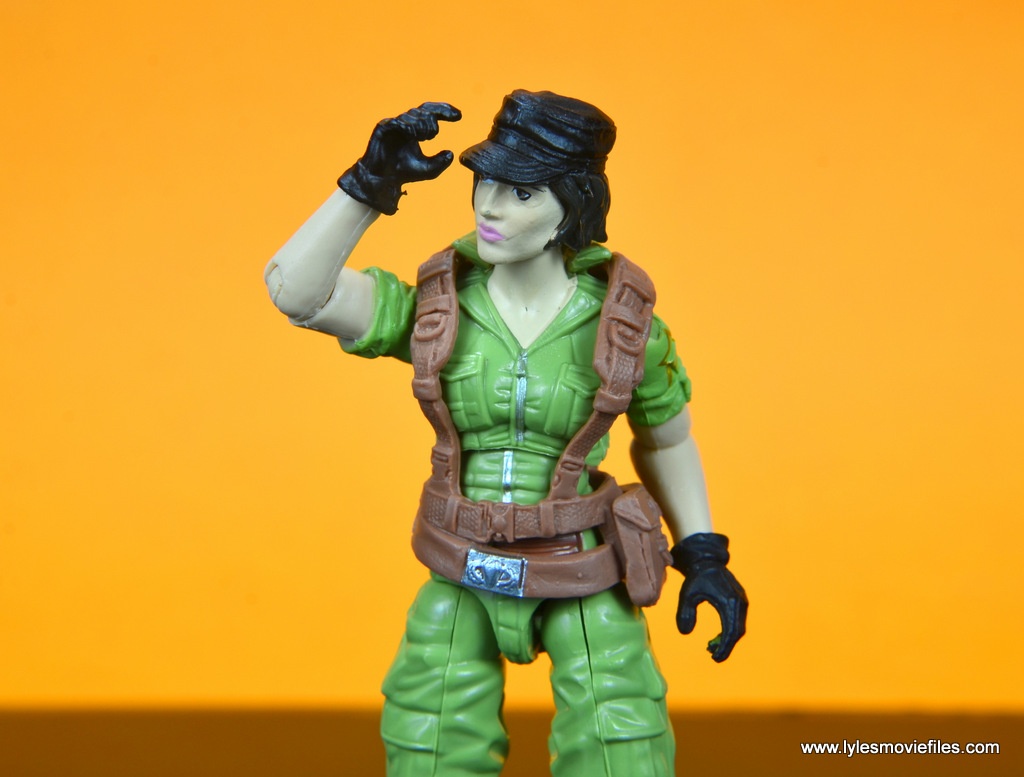 I can already tell I’m going to end up keeping both. I like the focused expression and the hat is scaled nicely. Hasbro put such great details into this line with just the right amount of folds in the fabric, kneepads and pockets. This is a great figure considering the scale. 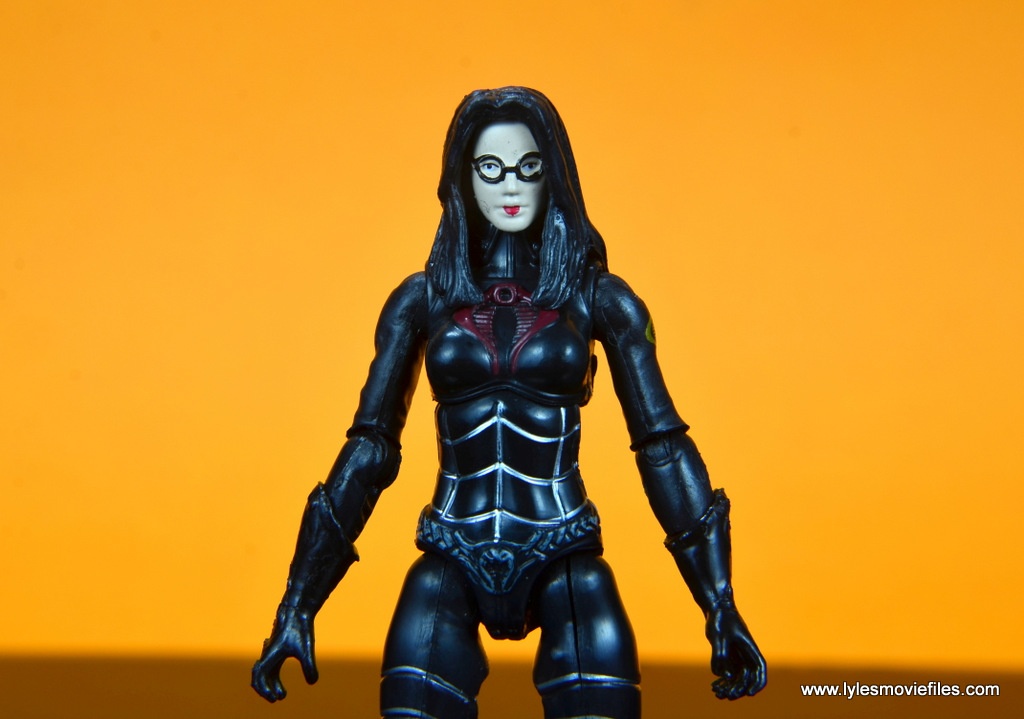 Baroness has minor differences since her first attire. This figure features her second, more iconic outfit with the paneled armor. All that line work to convey the various panels of her armor is actually sculpted, which is pretty impressive.  The head sculpt seems small and pinched in, but I appreciate that Baroness isn’t made to look like a model. That was always an odd twist on the character to me. I much more prefer the pissed off librarian look.

Paint:  After mainly collecting larger 6-inch and above figures, it’s impressive to see the paint work on these figures. Lady Jaye has some wonky eyes and is a little paler than I’d like. Eyes and small hairline issues aside, the figure looks solid. There’s some small traces where the hair wasn’t painted, but I doubt I could fix it without making more of a mess.

Baroness looks paler, which works for her. Her lipstick doesn’t fully cover her lips, but I kinda like how that gives her more of a thoughtful expression. Despite the amount of panels, only a few aren’t painted properly. That’s good work considering the precision needed.

Scale:  Neither were Amazons so they’re appropriately shorter than the regular male figures. 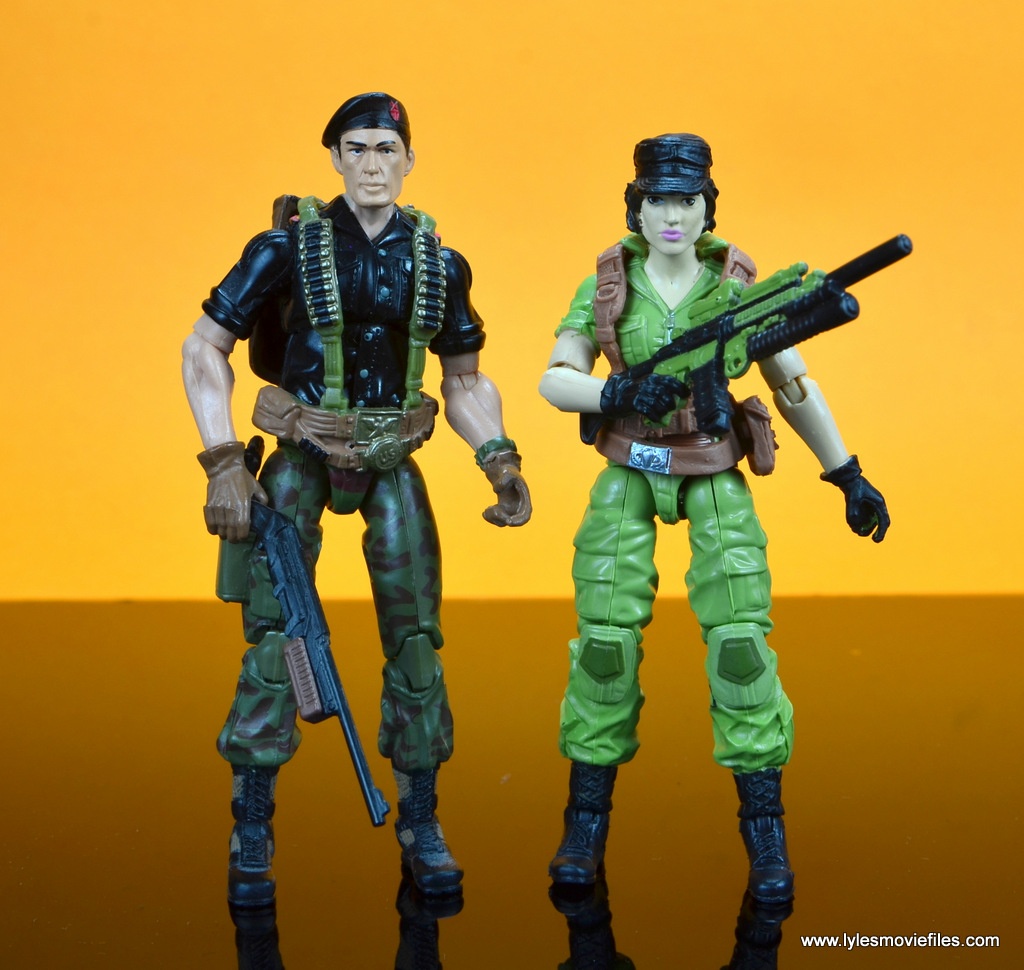 Articulation:  GI Joes always had terrific articulation after the swivel arm joint was introduced. These retain that great sense of movement. I was amazed that Lady Jaye has such great crouching and can hold all of the weapons. Baroness is pretty good although her hair limits the up and down and left and right movement of her head. 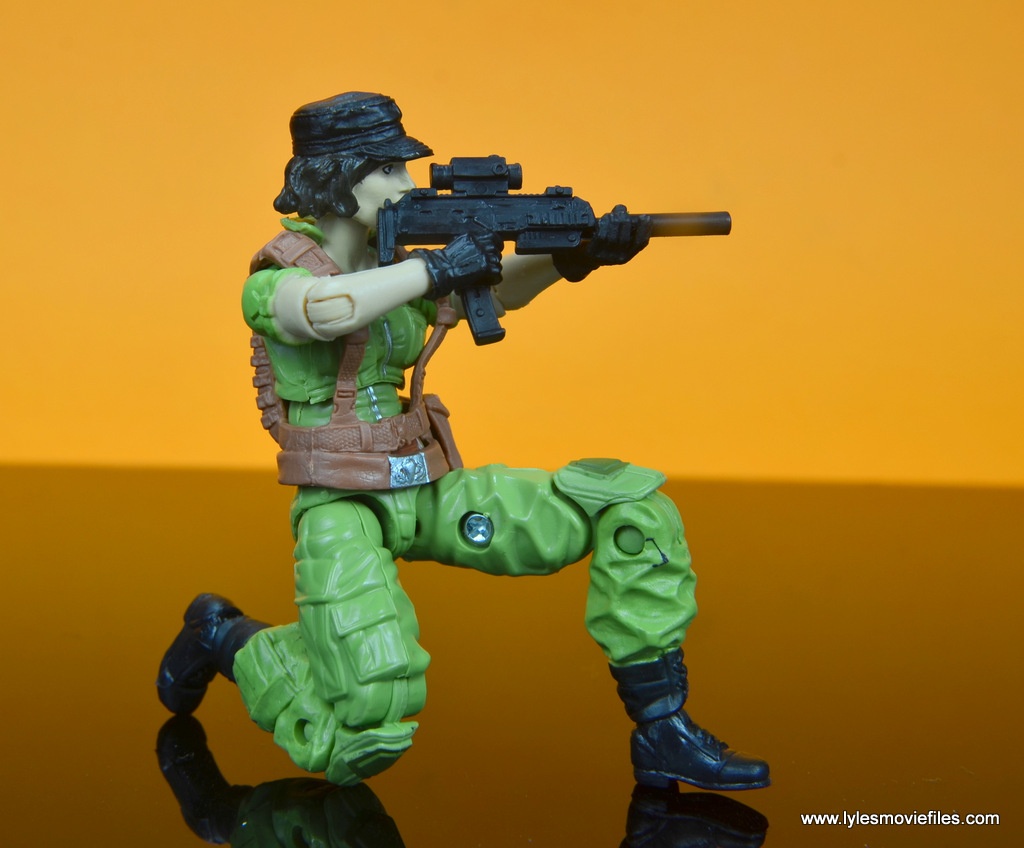 Lady Jaye and Baroness have: 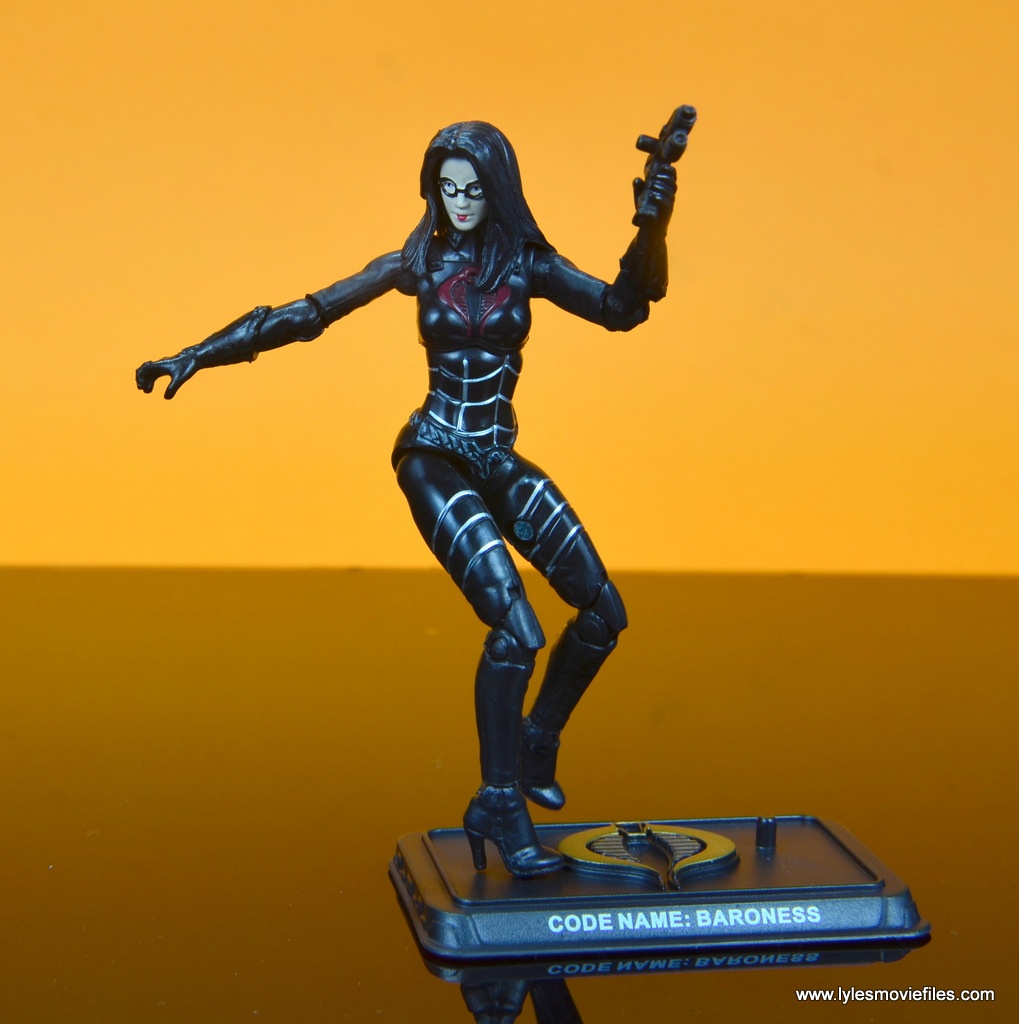 Accessories:  This is always the category where Hasbro really delivered with the two-packs. Instead of just giving each figure one or two weapons and calling it a day, Hasbro packed the sets with a virtual figure armory. 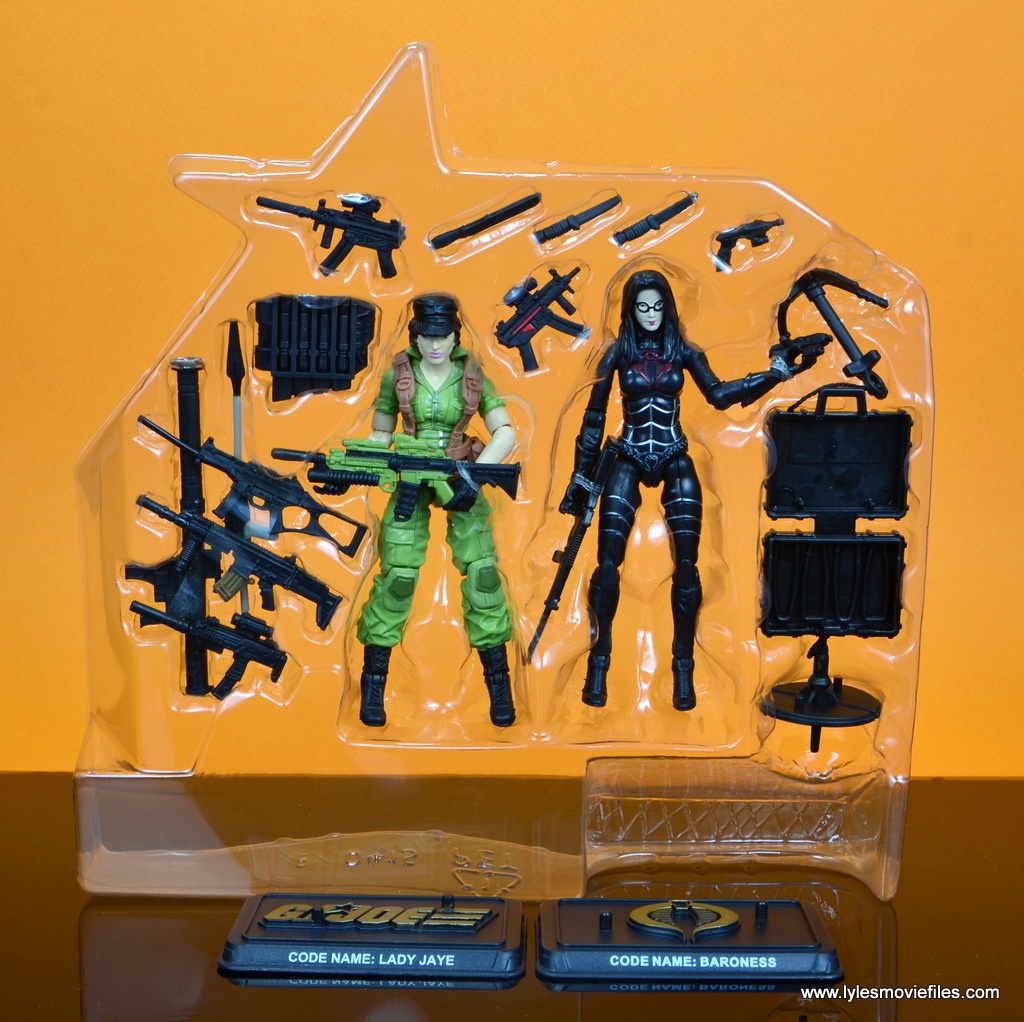 Lady Jaye has a javelin launcher and a green and black machine gun. Those are her weapons for sure. Baroness comes with a rifle and pistol. 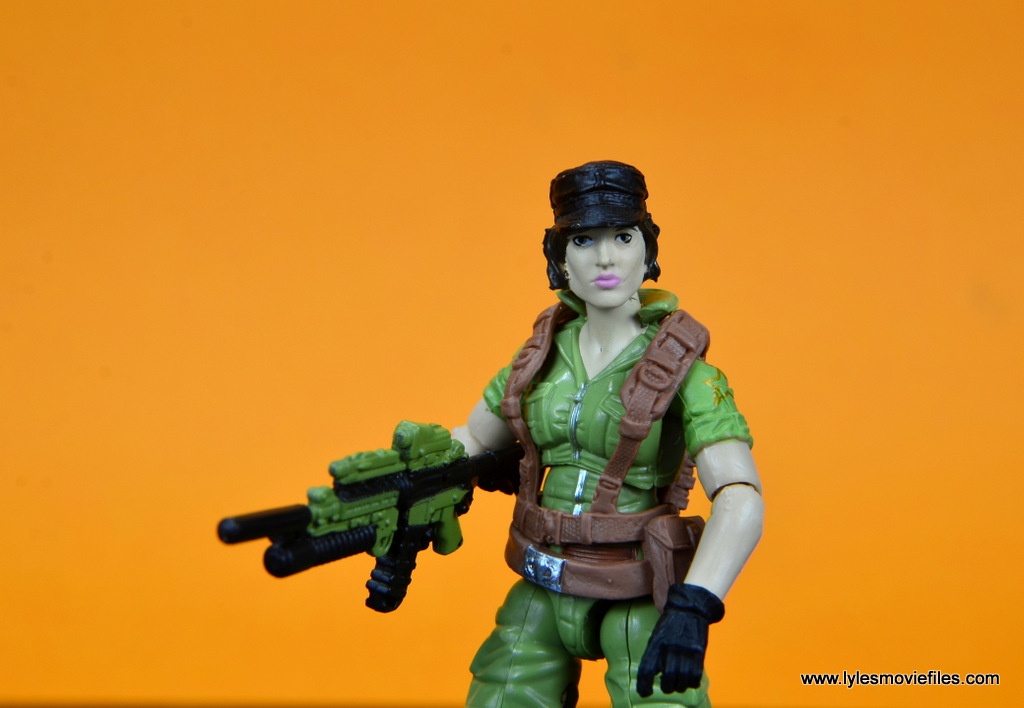 The pack also includes three rifles/machine guns, two sub-machine guns, a pistol, three knives, a grappling hook, a briefcase and a backpack. These will definitely help supplement your Joe and Cobra arsenal.

Worth it:  I paid $10 for this set, which was a steal considering everything including in addition to two really strong figures. Maybe that wasn’t the most cost effective model for Hasbro, but it was great for my wallet. 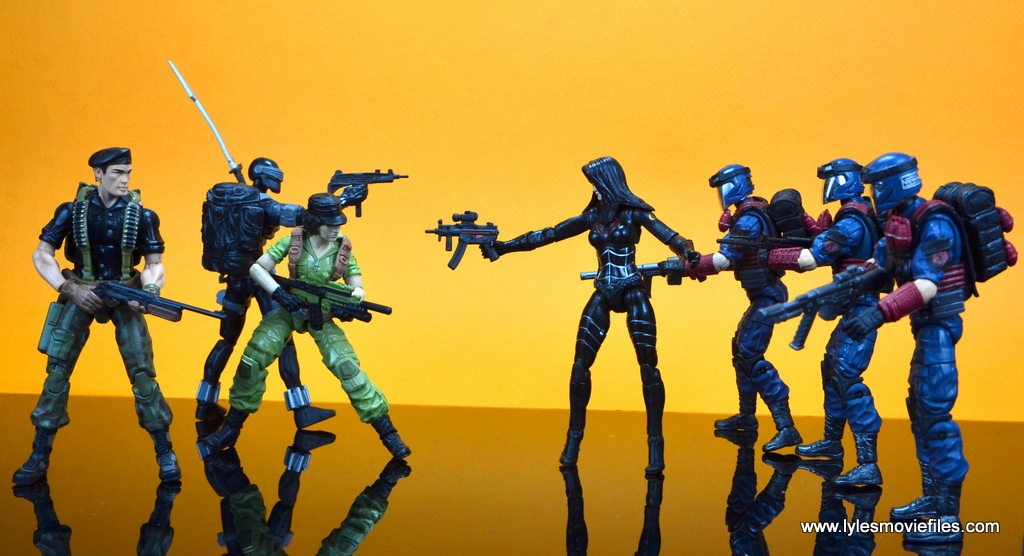 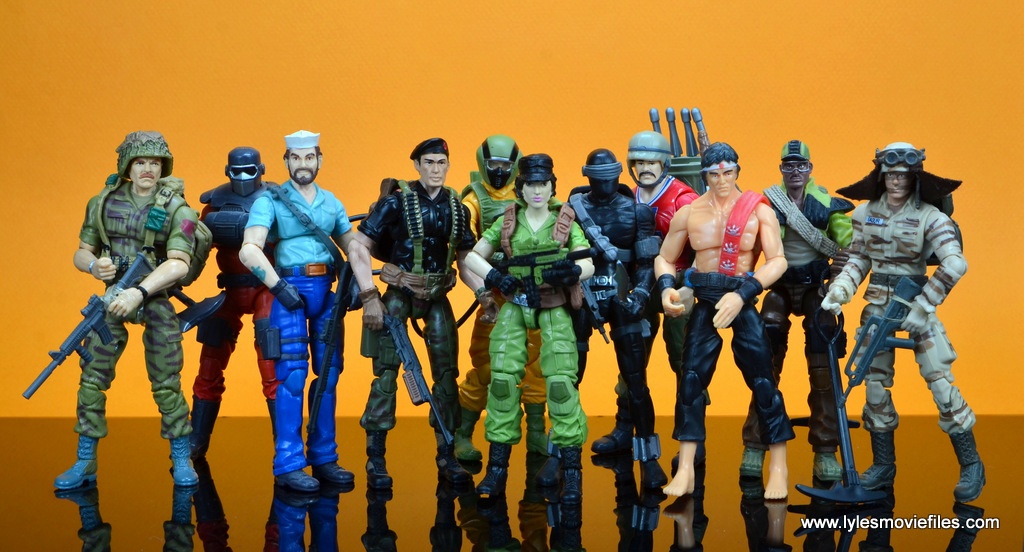 Where to find it:  Amazon is your best bet for these since they have them for $15. That’s still a great price for this set.