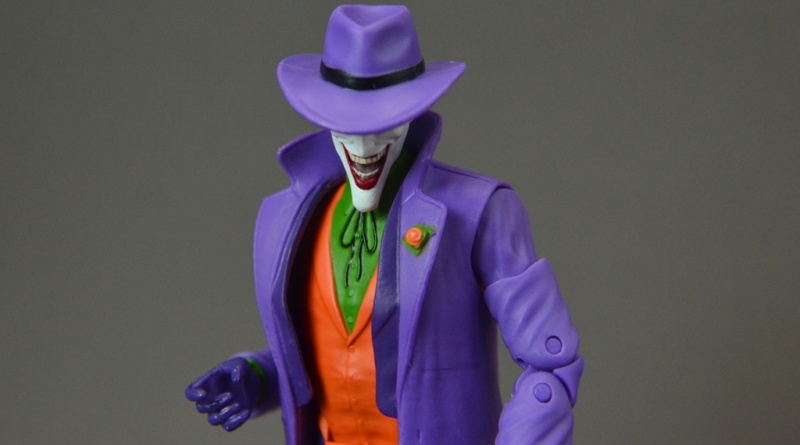 The Joker is one of those rare mainstream villains that even non-comic book fans think they know well. Whether Jack Nicholson, Heath Ledger or Mark Hamill versions, Joker’s Q rating is impressive.

Fittingly, DC Collectibles couldn’t go too much longer in its Icons line without doing their take on Batman’s archenemy. The result is an impressive first take for a character we’re sure to see more versions in the future.

Packaging: The Icons packaging is simple, but effective. Joker’s logo is on the top and in the O and the purple accents along the white box is a nice combination. I’d like DCC to include some form of a bio card. The only frame of reference for the specific look is the side panel. For hose who want to keep the figures MOC and in chronological order, Joker marks the 14th figure in the line. 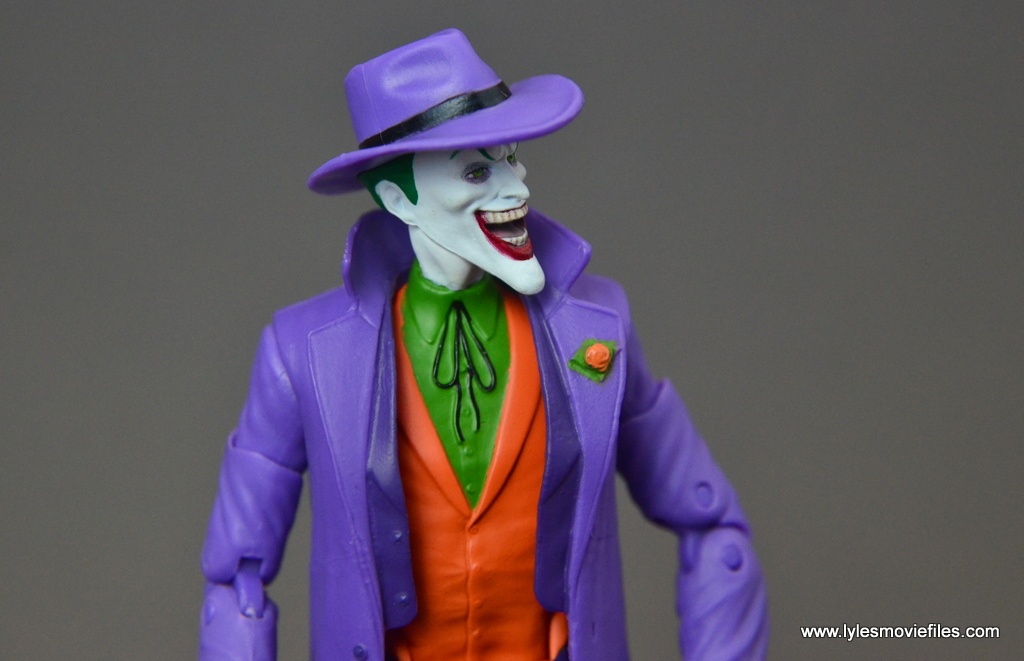 Likeness: DCC made an interesting choice and went with Joker’s fancier regular look. That means he’s got his fedora and trench coat. Joker is another character where it’s safe to say he’s good for several variants provided the line lasts for awhile. And this is really adding on to his regular look so it’s not a questionable variant like say the first series Mr. Miracle.

My only concern is the product delays, costume choices and reluctance of some collectors to embrace the true 6″ scale could doom the line before it’s time for a Joker variant. If nothing else I would have loved to have the hat be removable. 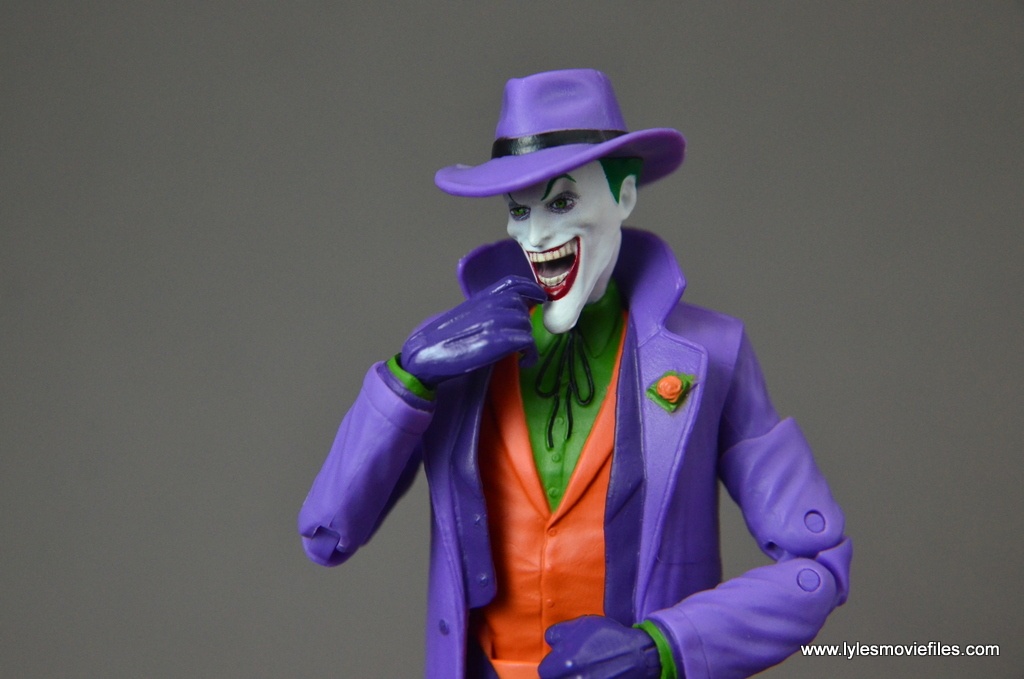 This headsculpt has a ton of character. It’s got that gleam of craziness and madness that embodies The Joker. There’s no reused parts here so his pinstripe pants are sculpted. Some collectors have balked at the cost of the Icons figures, but I don’t mind at all considering all the individual sculpting detail. 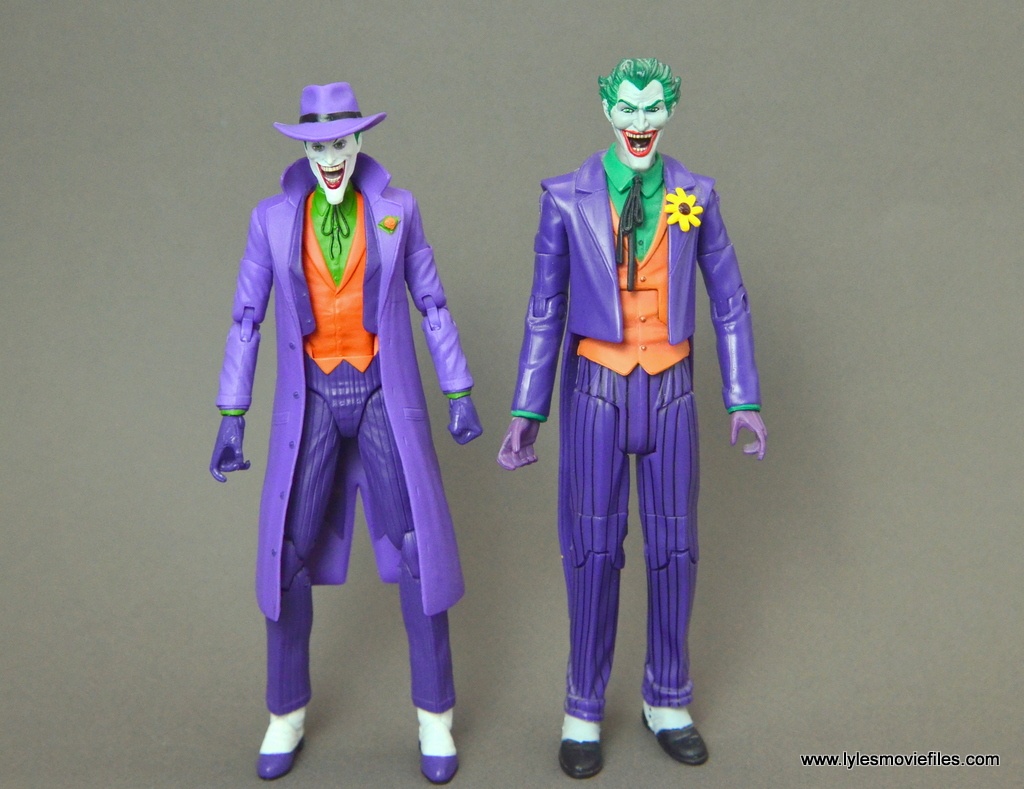 I considered Mattel’s DC Classics Joker as one of the standouts of that line. The DCC version holds up well to the point it’s just a matter of preference. 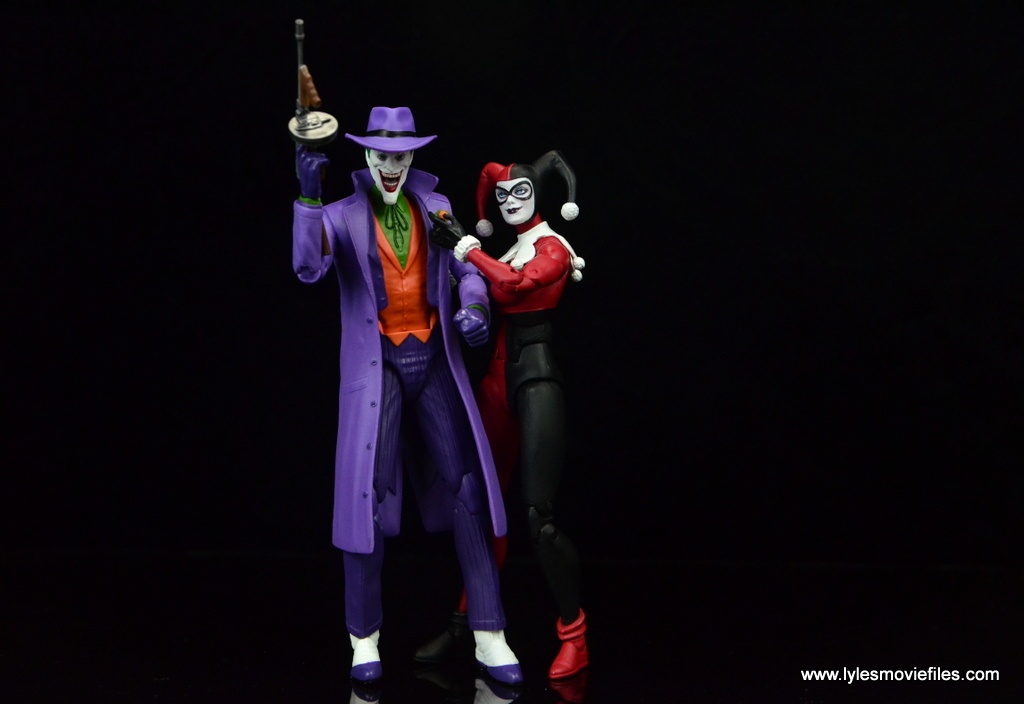 Scale: DCC does a true 6″ scale as opposed to the 6.5 of some other lines, most notably Hasbro’s Marvel Legends. Joker is taller than the majority of the line fitting in with his tall, slender appearance in the comics. He does have the not so welcome side effect of further putting a greater spotlight on the shorter than average Batman from the first series. 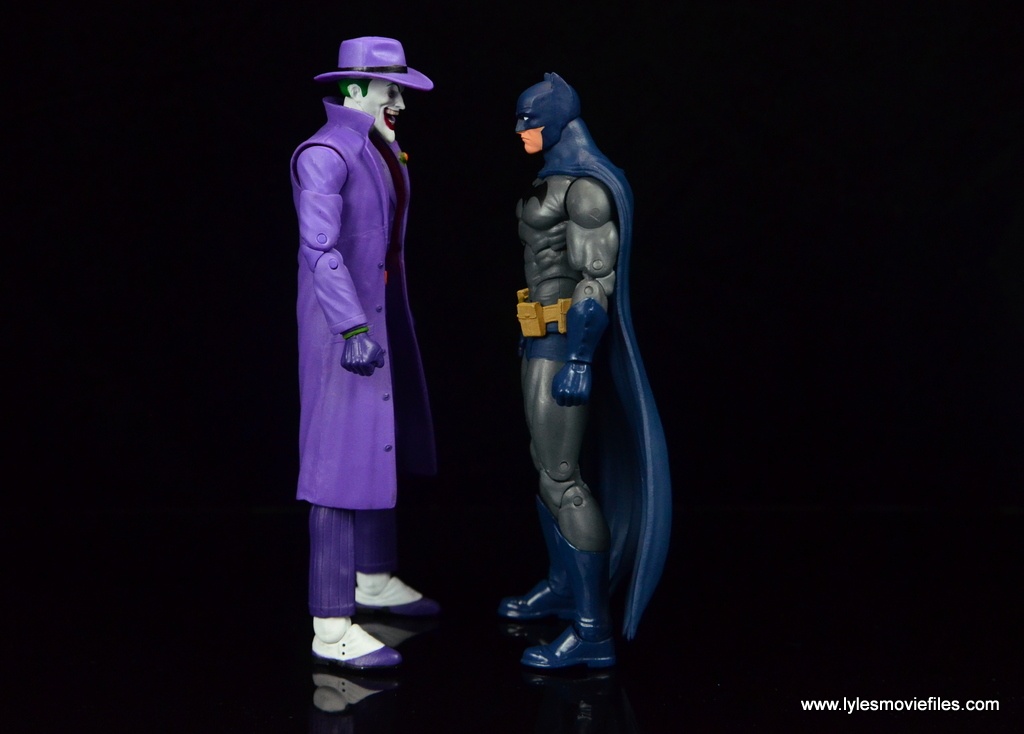 Paint: So far DCC’s work on the paintjob with the Icons line has been top notch. Joker continues that pattern. The two shades of the flower, the green shirt and orange vest are all clean. Also of note, The Clown Prince has two shades of purple with the fedora and jacket a lighter shade than the suit, gloves and shoes.

We saw this with the Superman figure to mixed results, but the paint around the eyes really gives it a mad sparkle. The teeth and ruby red lips are sharp as well. DCC has done so well out the gate with the paint job I’m becoming comfortable ordering them online. That’s the goal of every company and DCC has made that its norm. 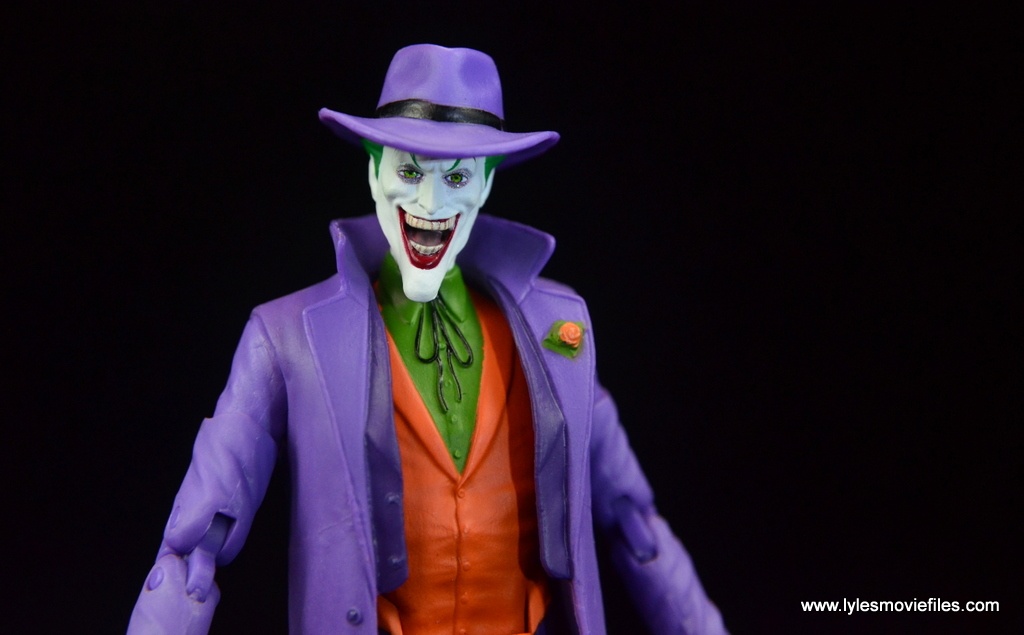 Articulation: Joker lacks any type of waist or upper torso swivel. That hinders his articulation significantly as far as side to side movement. Joker isn’t the most physical threat so that’s not as problematic as it would be for other characters, but I’d prefer the traditional waist point of articulation. 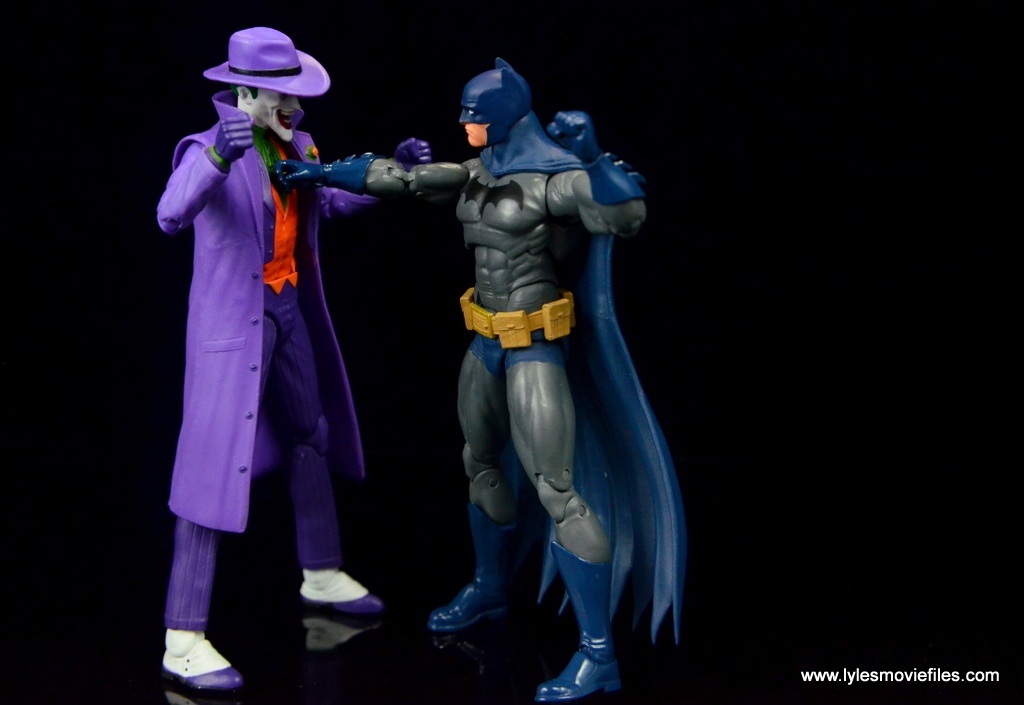 There is a lower torso hinge, but it’s not especially useful.The jacket is made of a welcome pliable material. fold allows for a simple kneeling pose by positioning one knee. 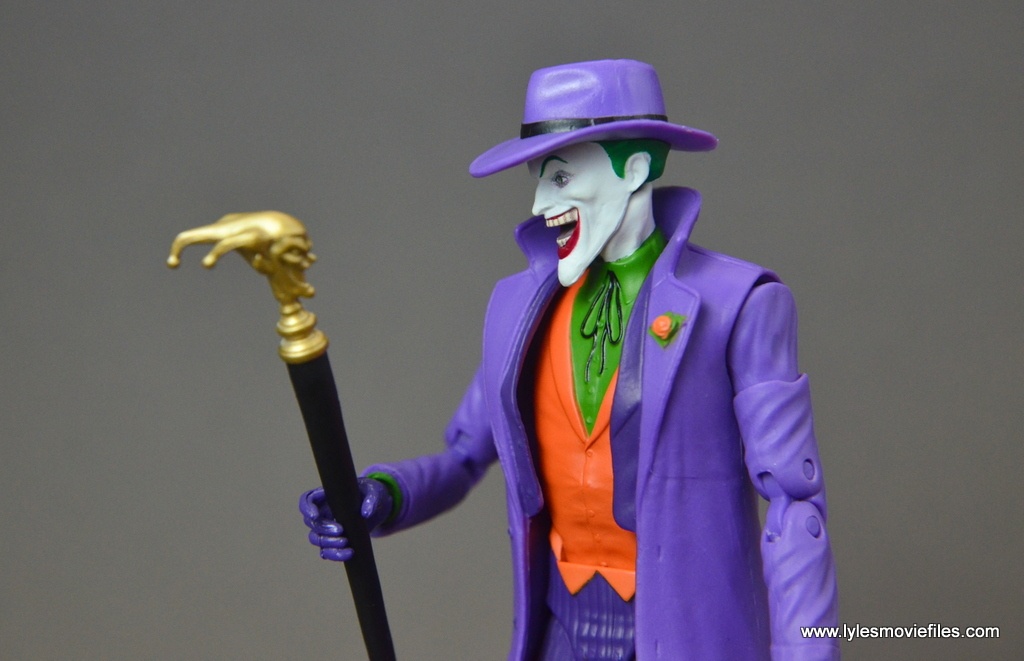 Accessories: In homage of the Death in the Family storyline, Joker comes with a crowbar. Unlike some metal pieces I’ve seen lately, DCC gave the crowbar a darker wash to really convey the metallic property. The Tommy gun also features a wash on the metal parts. It’s a sharp looking gun and fits easily into the appropriate hand. 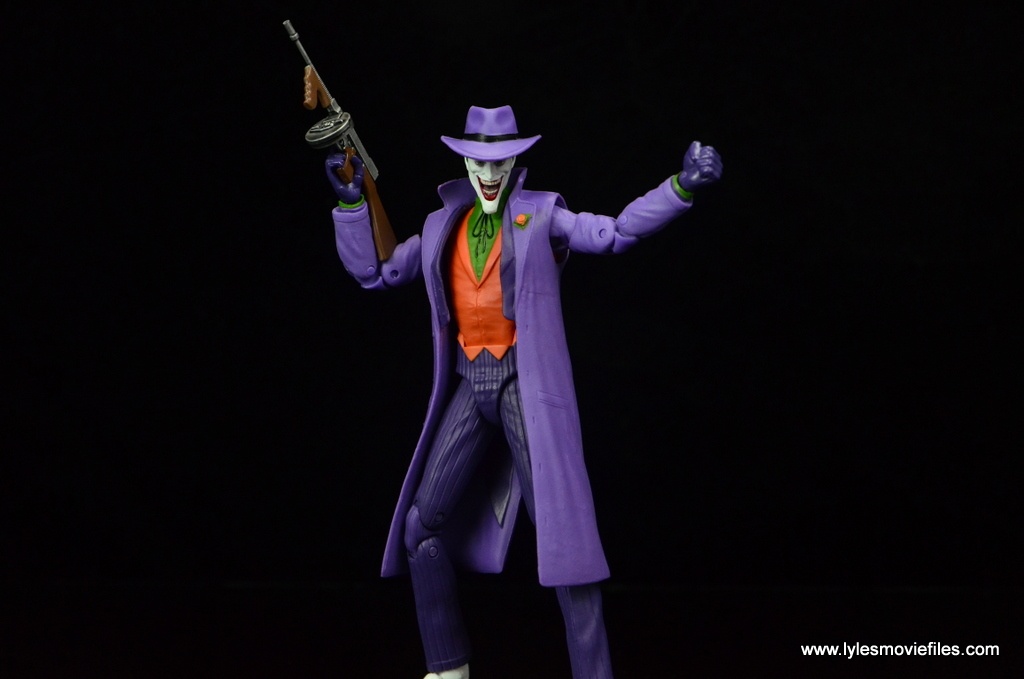 Joker comes with four different right hands. That’s an odd move since the left hand is a closed fist. Even one open left hand would have been nice to aid in holding the Tommy gun or crowbar. Beyond the right fist, there’s a gun holding hand, crowbar holding hand and another open hand. Those options are nice, but I would definitely have traded the other open right hand for an open left hand. 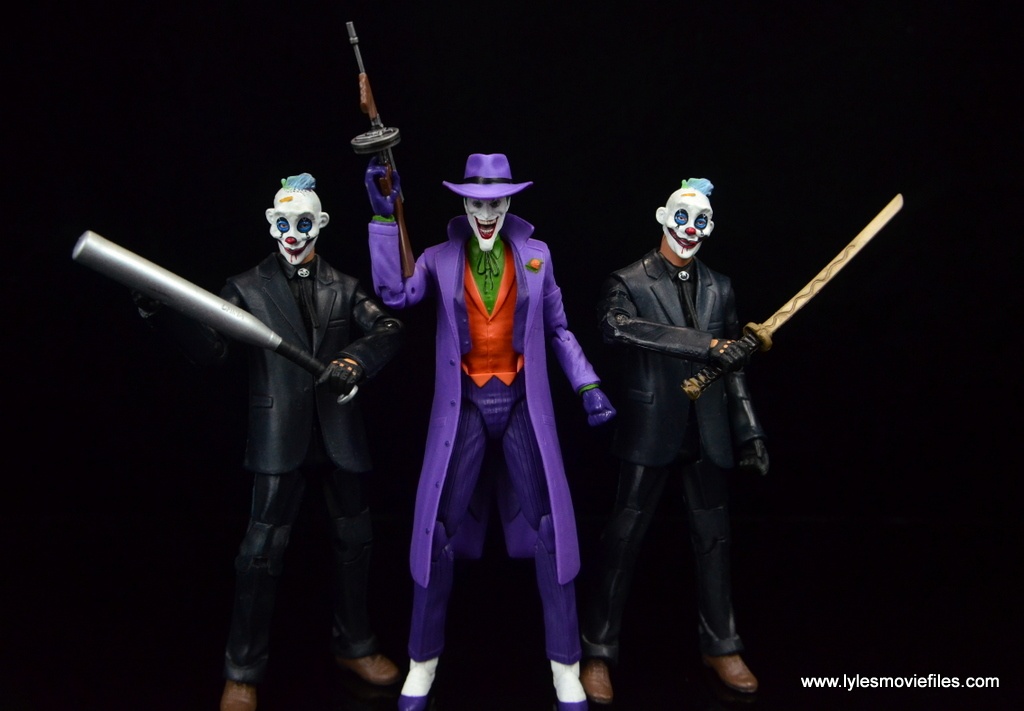 Worth it? I grabbed Joker from Amazon for $20. That’s a great price for the dedicated sculpt and a healthy amount of accessories. The standard cost is more in the neighborhood of $25. For that price, Joker isn’t a bad deal, but it might make some folks gun-shy as they hold out for a version without the hat and jacket. 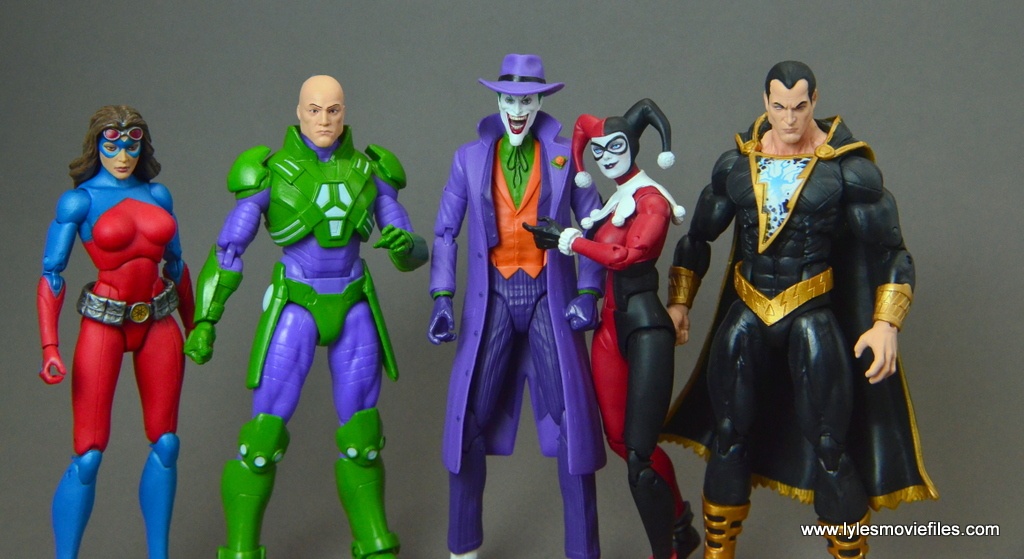 With a removable hat, another left hand option and a bit more articulation, Joker would fare even better. This is a very strong version of Batman’s archenemy.

Where to get it? DC Icons are typically found in comic book stores. None by you? Grab Joker from Amazon.