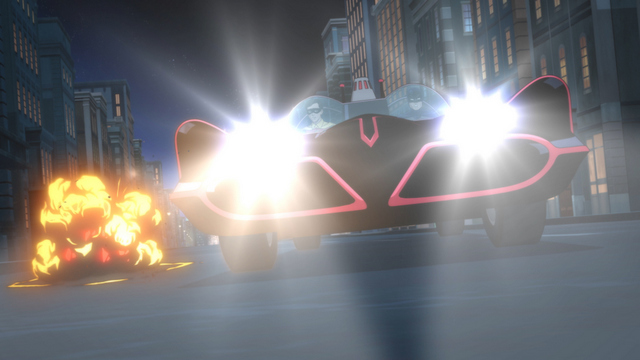 It’s not too late to see Batman: Return of the Caped Crusaders in movie theaters tonight. As part of the Fathom Events promotion, Warner Bros. Animation’s latest project is in theaters for a one night only event.

Return of the Caped Crusaders features the original Dynamic Duo of Adam West and Burt Ward as they lend their voices to the throwback outing. Julie Newmar also reprises her legendary role as Catwoman.

Penguin, The Joker, Riddler and Catwoman have combined their wicked talents to hatch a plot so nefarious that the Dynamic Duo will need to go to outer space (and back) to foil their arch enemies and restore order in Gotham City.

In addition to the film, audiences will view an exclusive pre-screening introduction, and a post-screening preview of ‘Those Dastardly Desperados,’ a featurette that explores how the villains became more than just antagonists in a Batman story – they became icons of American pop culture.

Here’s a new clip featuring Batman and Robin in action:

Check out the link to buy tickets now.

Can’t make it to theaters? Own the film on Digital HD tomorrow or grab it on Blu-Ray/DVD on Nov. 1.