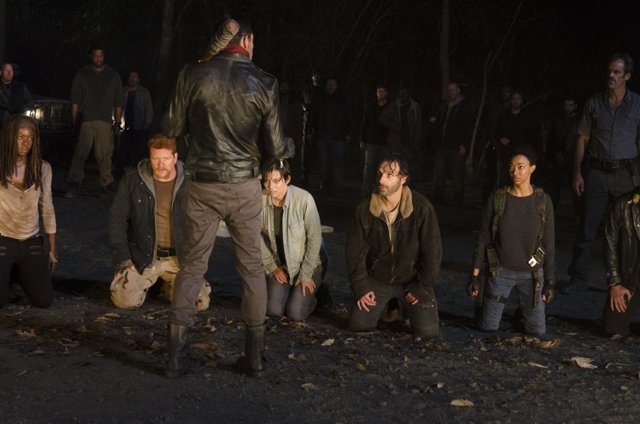 And that kids is why having a cliffhanger season finale is a very good thing. The Day Will Come When You Won’t Be was a brutal, emotionally challenging kickoff to Season 7. Even though it was tough to watch at times, this premiere sets Season 7 on track to be one of The Walking Dead’s best seasons yet.

Last season’s finale got a lot of hate from viewers who wanted to know right away who Negan killed. The show could have gone the traditional route and showed Negan’s victim, but that would have only satisfied the gotta have it now/binge mentality of viewers. And there’s no way any fan was going to have the patience to endure six to seven months after this episode. We need the cathartic release of seeing Rick and company take action immediately, not months later.

But, much like my 49ers’ 2016 season, The Day Will Come When You Won’t Be ended without much hope for The Grimes Gang. And in the seventh season, putting our heroes in an unwinnable situation is huge and absolutely necessary at this stage in the series.

We’ve seen them in so many scenarios at this point that it’s easy to be numb to the thought of yet another tough challenge to overcome. That’s not the case with Negan and his army. There doesn’t seem to be any strategic, easy or cheap way Rick and the gang can beat him. But finding that way to get revenge will be a compelling main plot for this season.

And there’s not another character more deserving of major payback than Negan. Jeffrey Dean Morgan made Negan the cruelest, evil character on the show yet. Negan is a dude used to getting his way and making examples of anyone who crossed him. Watching Abraham take shot after shot from Lucille was tough, but it was Negan’s second murder that earned him top honors of the series’ most despicable villain.

Abraham was a character that seemed a safe bet to hit all the marks for a likely victim. The show wasn’t going to go as far as have Negan killing any of the women or Carl. So a somewhat expendable, replaceable dude like Abraham would sting, but we’d get over it. But losing Glenn too? That hurt.

Glenn’s death seemed unlikely since his near-death experience last season and the fact that Negan killed him in the comic. That should have marked a recipe for survival. Instead, it led to a seriously shocking death. Daryl going after Negan was perfectly in character, but the consequences were serious. It gave Negan the kind of character credibility that makes every threat a legit promise.

While we’ve seen death to critical characters before, the impact it had on the other characters made The Day Will Come You Won’t Be the most heart-wrenching episode. It was bad enough that Negan killed two of the core group, but he also trotted Rick out like a dog and completely humbled him in front of the others. Rick has always been headstrong at times to the detriment of his group. Rick’s visions of Negan smashing everyone’s head in was key in showing his pride and spirit was beaten down. This brought full circle the warning Rick received from Dr. Jenner:

Even worse, Negan’s cruelty was so encompassing, it left the group broken. Daryl might still have some fight left in him, but the others are emotionally crippled and fully hopeless.

That’s a tremendous place to kickoff the season. Our heroes are at their absolute lowest faced with a seemingly unbeatable opponent. Watching them find the strength to fight back against Negan should make for a tremendously compelling season.