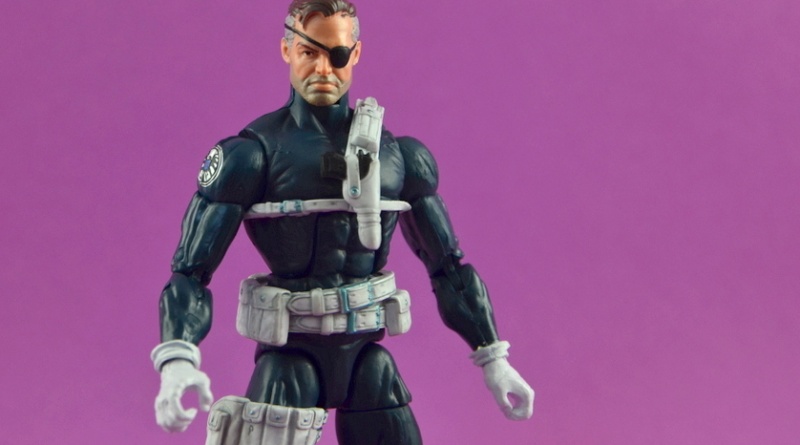 I feel kind of bad for the comic book version of Nick Fury. First he immediately became irrelevant the second Samuel L. Jackson debuted in Iron Man essentially making the Ultimates version the default one for millions of non-comic book readers. That was bad enough, but Original Sin made a drastic change in one of Marvel’s oldest heroes. The years haven’t been kind to Fury.

Fortunately, he gets a little respect from Hasbro still as they released an updated version of the classic Fury in its Marvel Legends line.

Packaging: This is your standard Marvel Legends packaging. Nothing new for me to add on it at this point. It’s classic and works to showcase everything that should be in the package.

I still really like the side panel character portrait and think Hasbro needs to spend a bit more time on the bio, especially when the accessories include another possible figure option.

Likeness:  I’m struggling a bit thinking Nick Fury has a bit of a pinhead. Besides that, this is the vintage head of SHIELD that I’ve known and loved for years. The expression is good although I preferred the more intense headsculpt from Toy Biz’s Series 5 version. 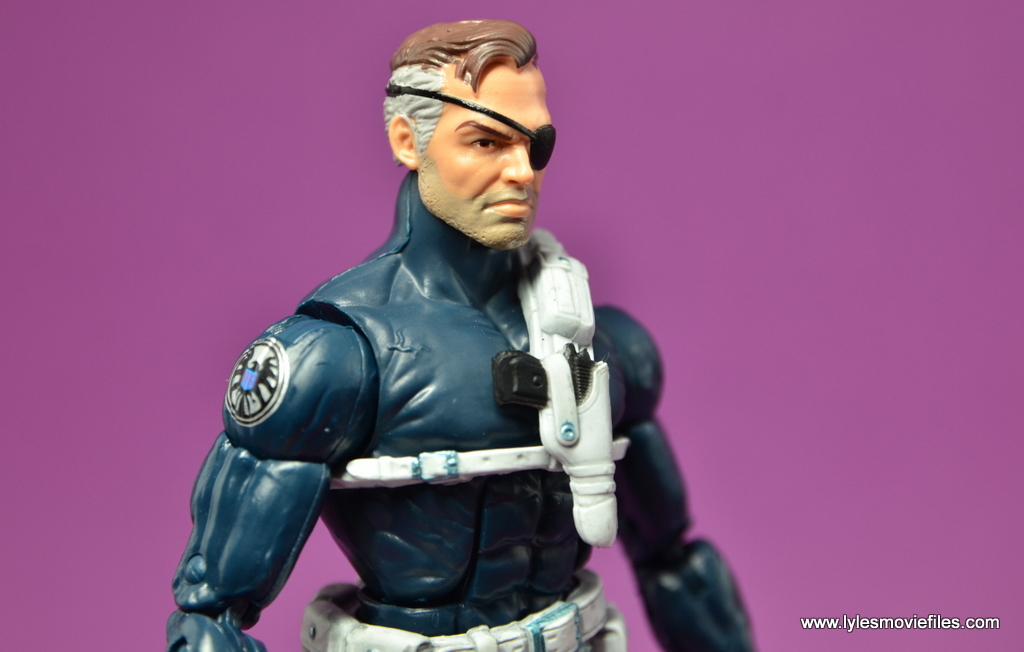 This is a case where all of the straps and pouches are actually necessary and they do a nice job of adding a little sizzle to a body Marvel Legends collectors have become accustomed to in the last two years.

Fury is built on the Bucky buck. That’s been the go to body for most regular sized guys for awhile now. That doesn’t make it a bad choice though so it’s most fitting for an average guy like Fury. 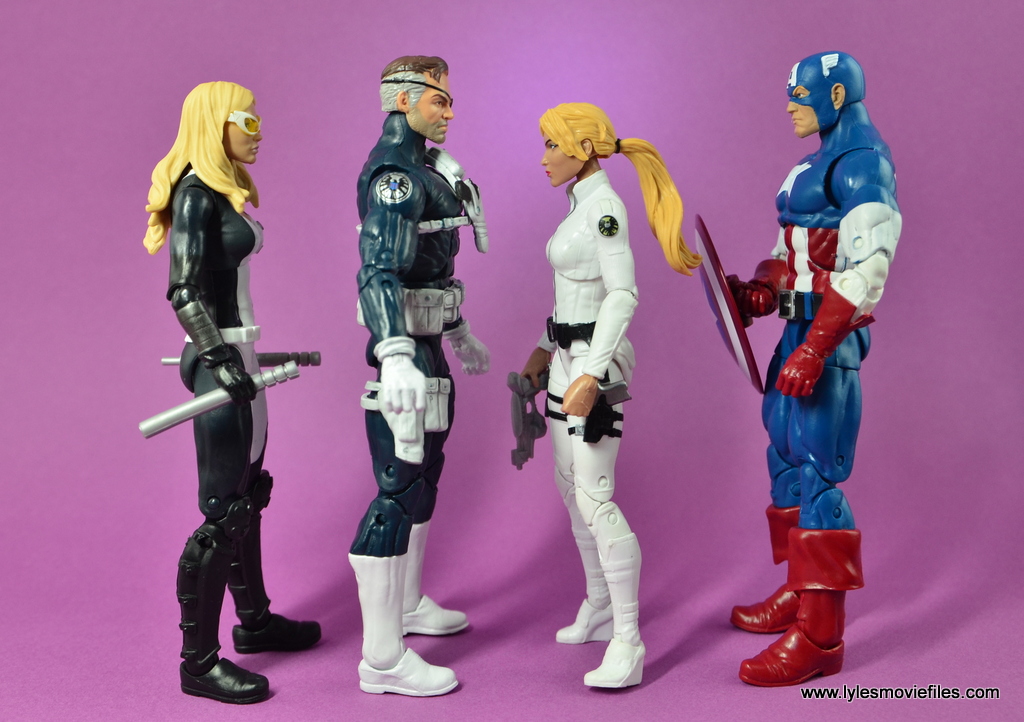 Scale: Fury clocks in at regular height. He shouldn’t tower over anyone and the figure accurately conveys his height around super soldiers and Asgardians. 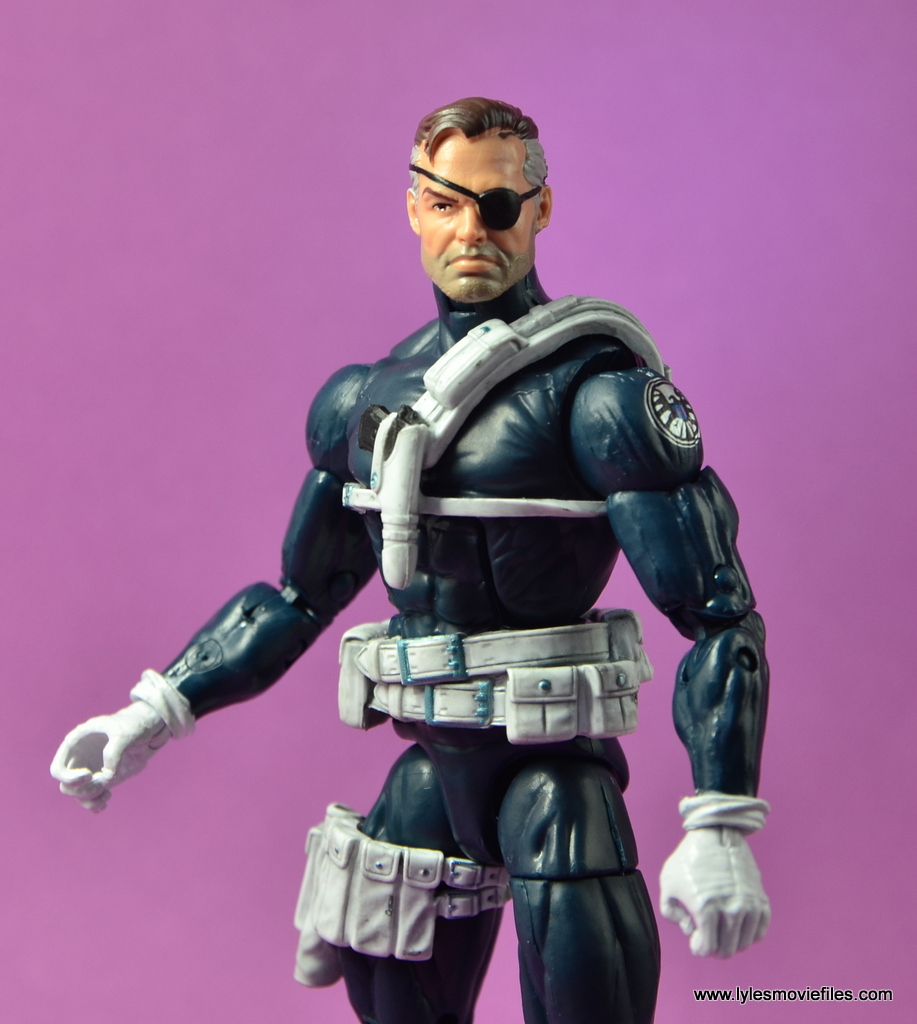 Paint: For the most part the figure doesn’t require a lot of paint details so it’s disappointing there’s so many issues. The hairline isn’t fully painted at the front and the eye patch strap wasn’t lined up correctly.

The five o’ clock shadow looks good and Fury’s one good eye is painted straight — always important for me — and the graying temples came out solid.

It’s the pouches and holster that get the extra attention with washes. I appreciate that since straight white would look weird. They’ve got a nice leathery look to them and are very well done. I wish Fury’s gun had some sort of paint apps. It’s toy-silver. Maybe Fitz whipped up some plastic guns for SHIELD agents? 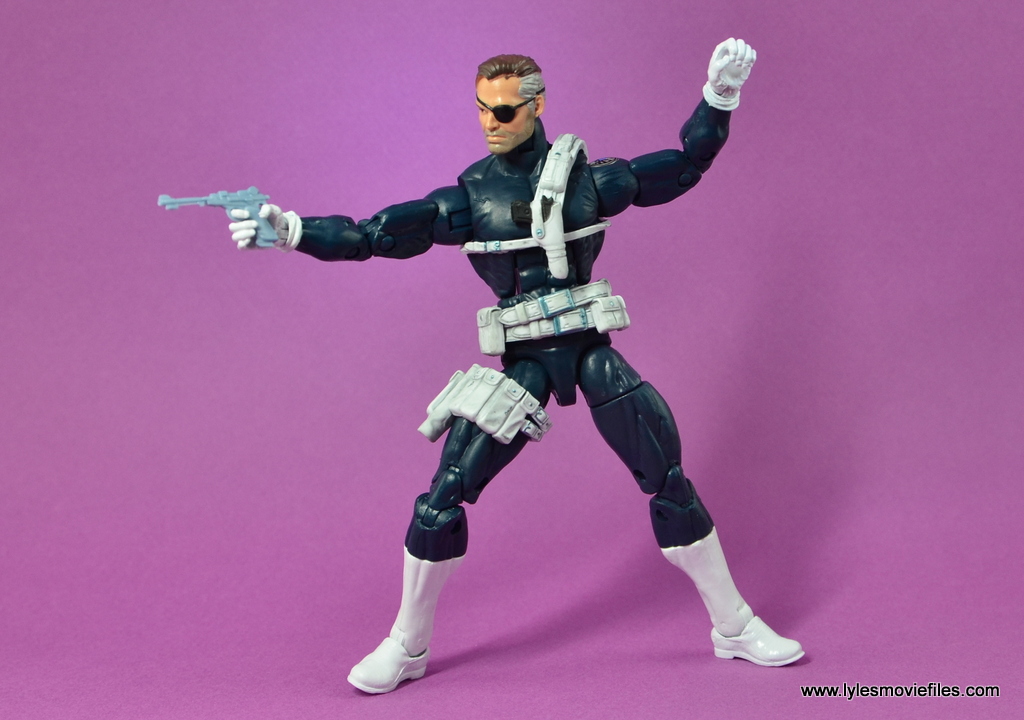 Articulation: The Bucky buck is not only solid for regular guys, but it’s one of the best engineered blank bodies of any line. There’s a downside to this body as it’s prone to excessive floppiness if the figure’s joints aren’t tight enough. One guess as to how my Fury turned out. I had bad luck all around on that end as a second Fury I bought also had the same floppy body, especially around the neck.

Accessories: This is where Nick Fury really shines. Hasbro included two additional heads. One is a basic SHIELD grunt, which should be more than enough to encourage army building. The second head is of Dirk Anger, a character from Nextwave that was created as a parody stand-in for Fury. 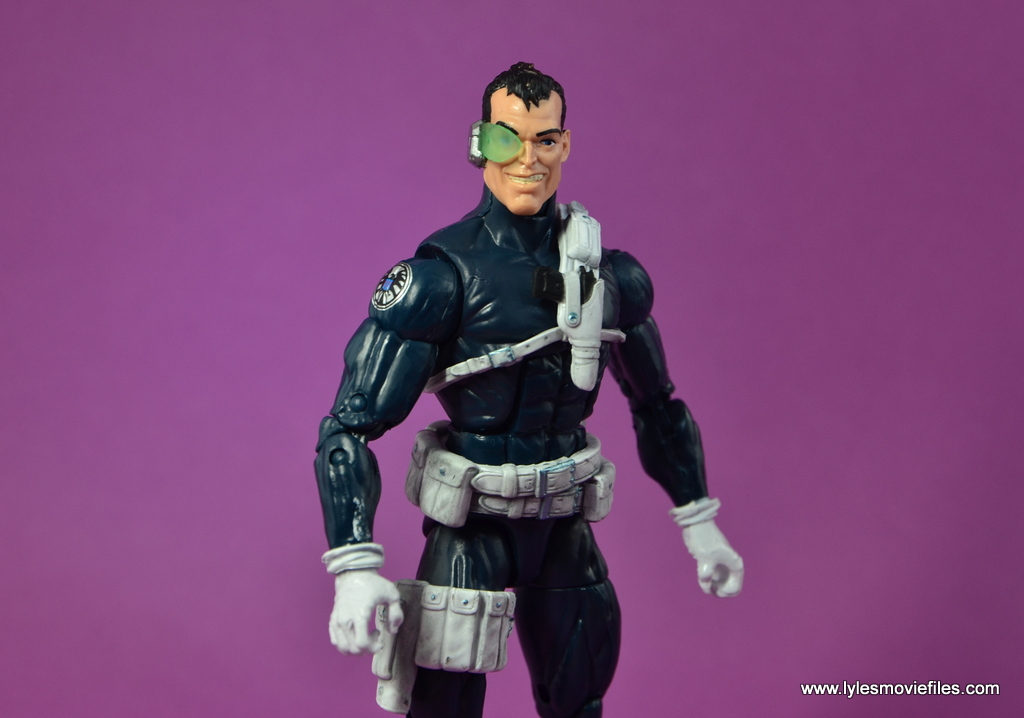 Hasbro has been great about including alternate head sculpts with figures. That definitely was useful in this case and I can see gobbling up at least two more figures so I can have generic SHIELD soldiers flanking Fury.

Additionally, Fury comes with the left arm of the Build-A-Figure Giant Man. 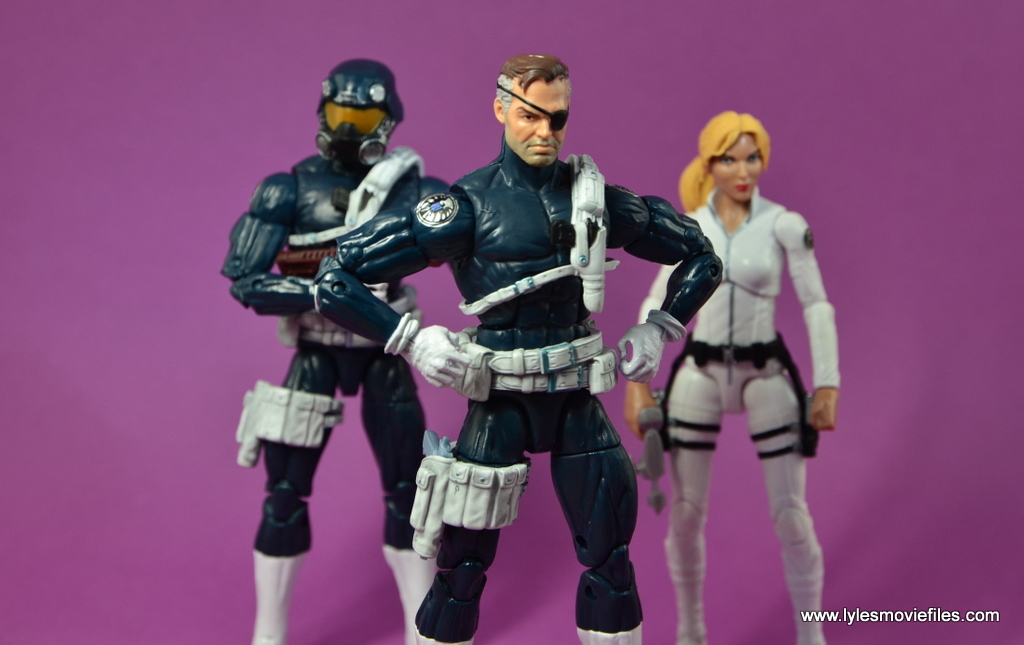 Worth it? For the cheaper than retail price of $17 for a figure begging for army building, that’s a pretty solid price. Fury certainly benefits from the additional display options. 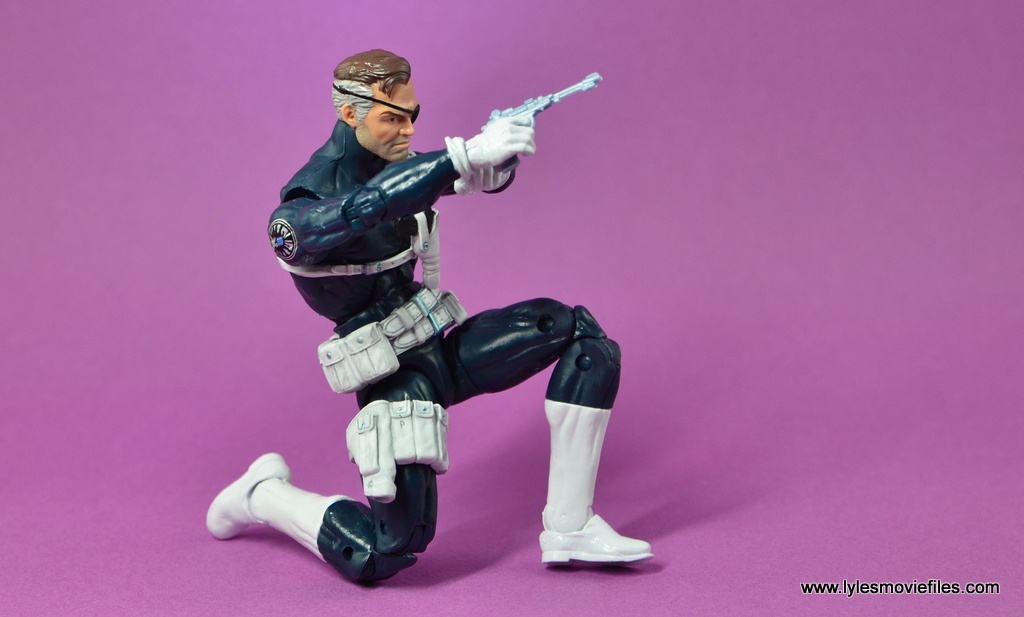 Fury isn’t as flashy a figure as some of the other characters in the wave, but he’s an essential addition for old school collectors. This is a much improved upgrade and the accessories give him the extra oomph. 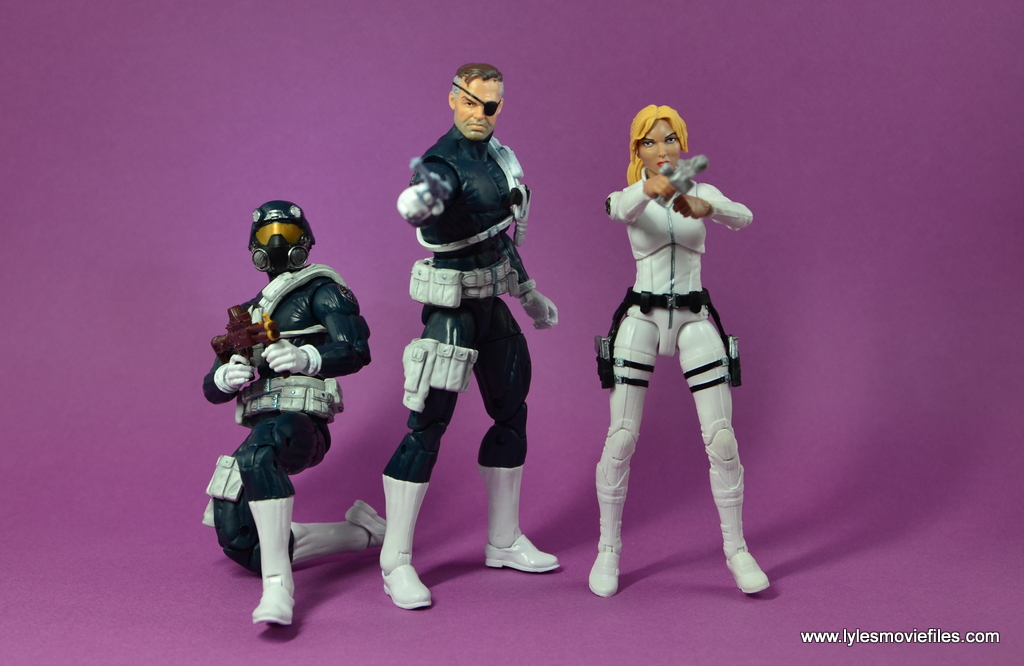 Where to get it? K-Marts have been pretty reliable in terms of this Captain America wave. I’ve also seen this set semi-regularly at Toys R Us. If you want to avoid the chase, grab him from Amazon.com or the whole set from Entertainment Earth.