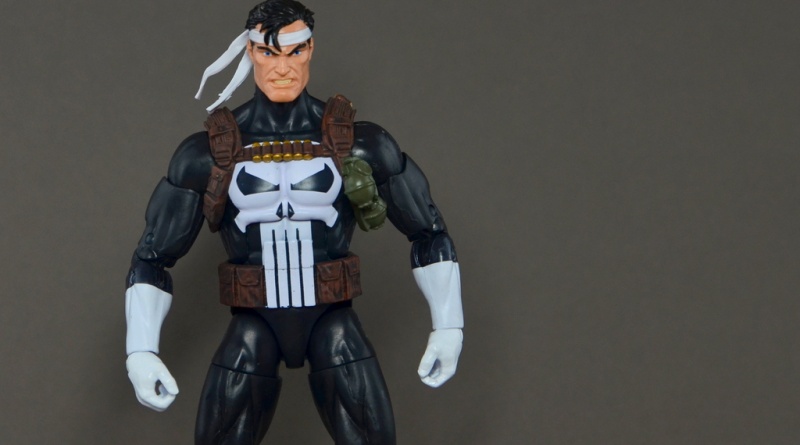 This has been a pretty great year to be a Punisher fan. Following Jon Bernthal’s captivating performance as Frank Castle on Daredevil, Netflix ordered a full series. Hot Toys announced a 12” figure is in the works and Hasbro released a new Marvel Legends figure as a Walgreens exclusive.

Over the last few years, Hasbro has been on a mission it seems to make longtime Marvel collectors replace some of their beloved Toy Biz Marvel Legends figures. Toy Biz’s first take on The Punisher was pretty close to perfection. Let’s see if the Hasbro version will finally knock that figure off the top of the mountain.

Packaging: Fittingly for the character, Hasbro went with a simple black and white color scheme for the package. Having a bunch of various waves together makes for a very colorful MOC setup. The side panels feature art by Mike Deodato with a fairly basic, but expected bio. In Punisher’s case, he’s the rare character that can be neatly summarized in a sentence. The inner lining features the Punisher logo in a unnecessary, but cool touch. 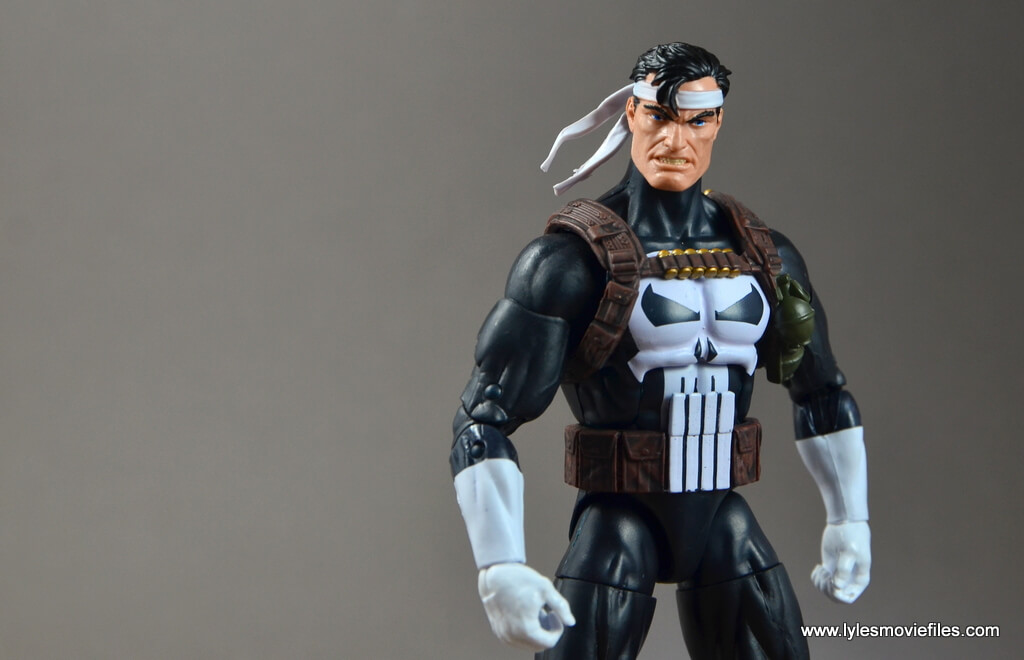 Likeness: This is a pretty accurate take on the Punisher from his Punisher War Journal look complete with white headband. This figure looked like it leaped right out of the pages of a Jim Lee issue.

RELATED: Catch up on The Punisher’s Netflix debut in the Daredevil Season 2 Recap

In looking at reference pictures of the costume, the shotgun shells across the chest were largely absent. I’m not a fan of them either as they distract from the skull, which looks better without the interruption. 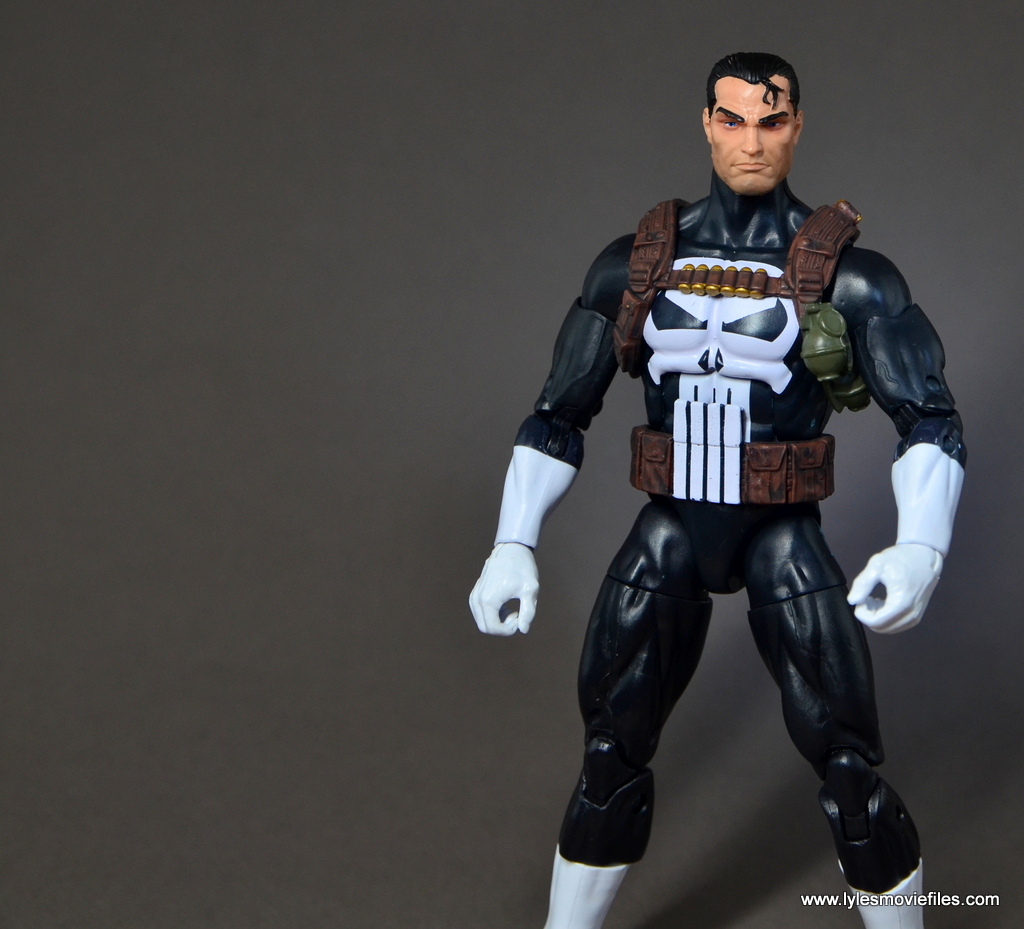 Punisher comes with two head sculpts. One is a PWJ appropriate headband and the other a red-eyed, battle weary traditional Punisher head sculpt. I really dig the alternate sculpt. It looks borderline crazy, which is fitting for Frank Castle. There’s some great shading on his five-o-clock shadow as well. The Toy Biz Punisher had one of my favorite head sculpts ever. Neither tops that, but they’re exceptional on their own. 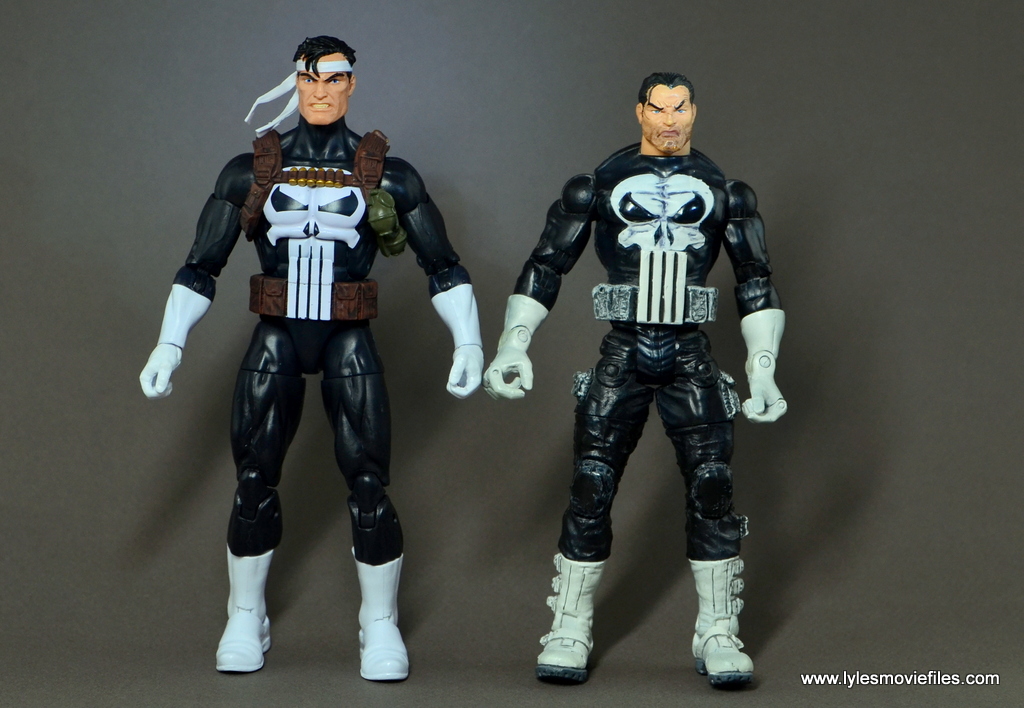 Scale: Hasbro gave Frank the larger build we’ve seen on Captain America. That’s a good choice as it conveys Punisher’s bruising look. He doesn’t need to be a towering hulk, but he still needs to have an imposing presence and this buck accomplishes that very well. 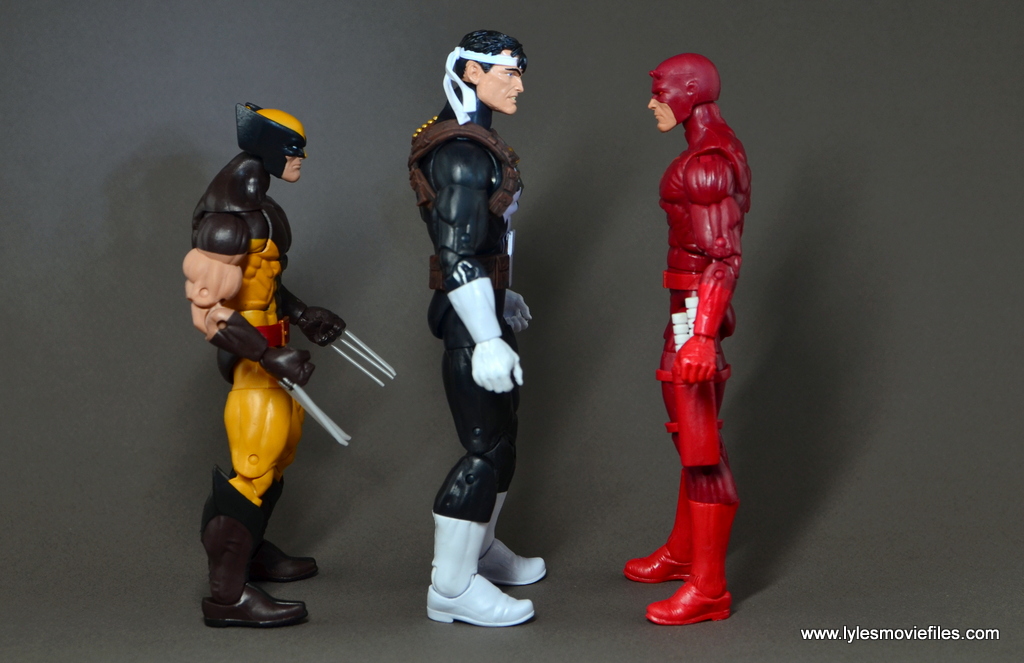 Paint: Hasbro has been on a roll lately with quality paint apps on their figures. Punisher proved a bit problematic thanks to the second trickiest color next to yellow — white. It took some searching, but I finally found a Punisher with fairly clean ammo clips, which double for the skull’s teeth. The skull itself has fewer issues, but I definitely saw some where checking was essential. You’ll want to check the two heads as well.

Once I found a winner, I was impressed with the use of the glossy white for the boots, gloves and skull. It definitely helps convey that end of the road for crooks feel Punisher hopes to achieve. The ammo belts have a decent wash to bring out some details, but the grenades are a solid green. 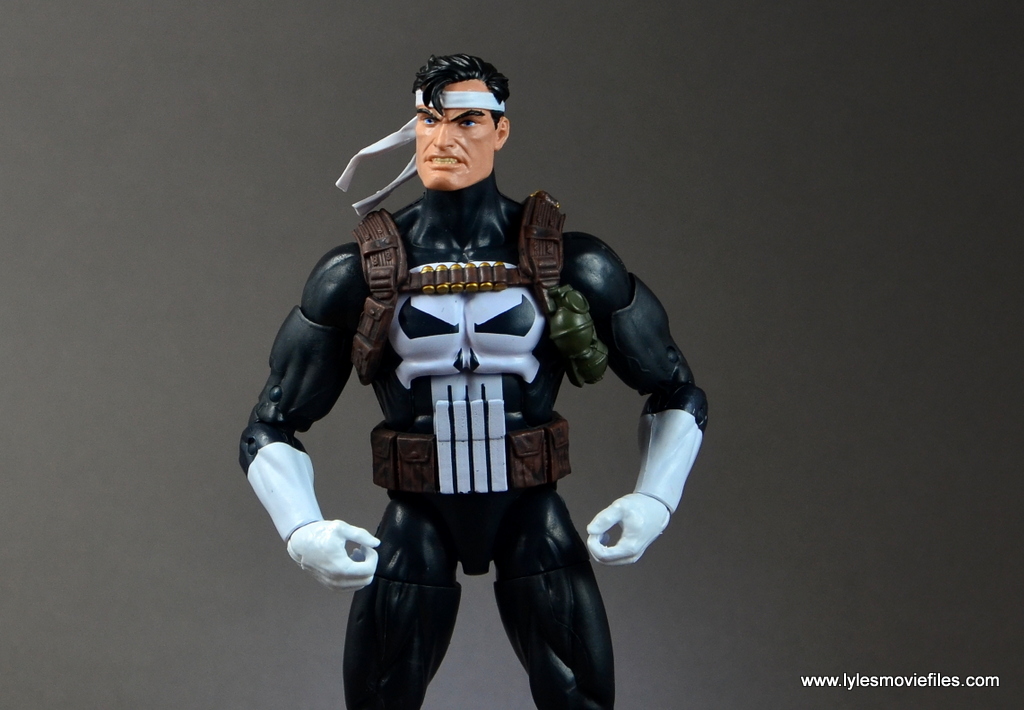 Articulation: Punisher gets the regular articulation scheme. The Cap body is another well-engineered body articulation wise. Punisher can sink in deep for poses whether crouching, kneeling or aiming a machine gun at some unfortunate goon on his hit list. 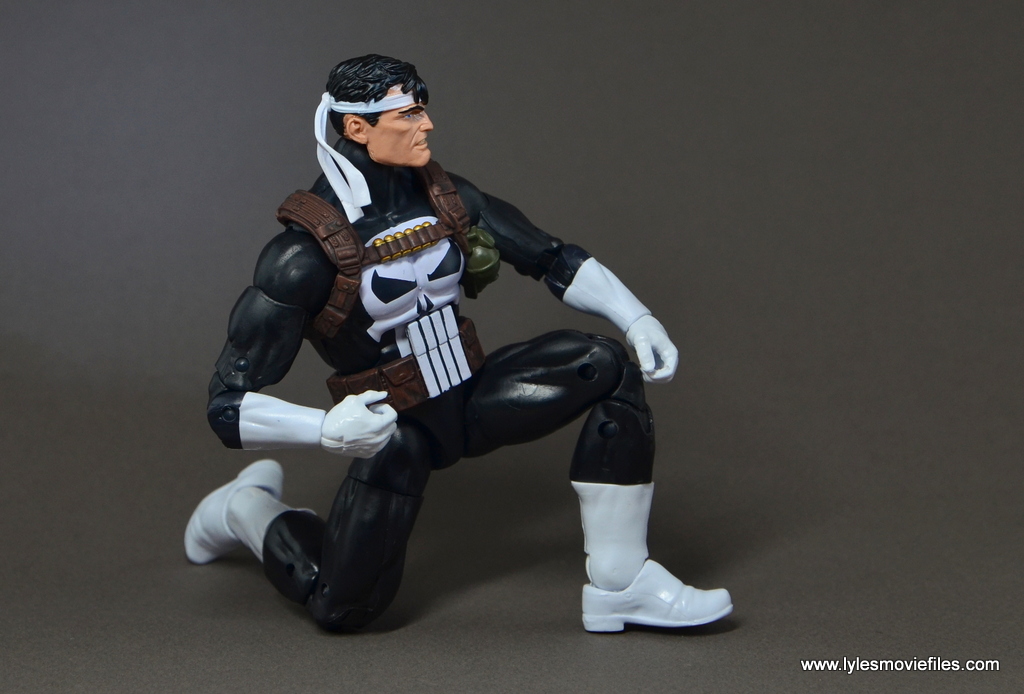 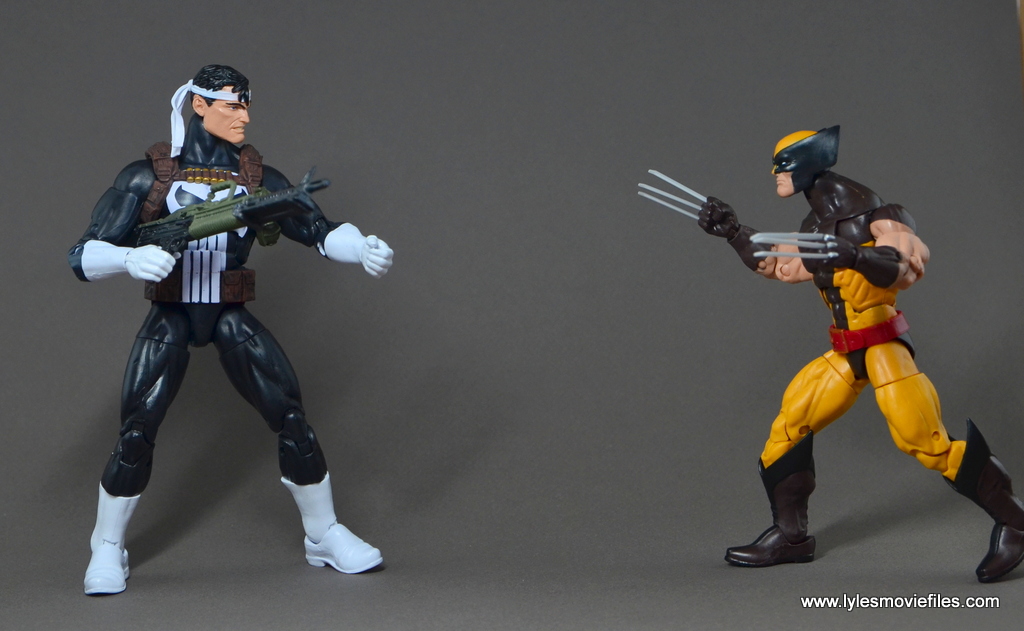 For some weird reason Hasbro didn’t use hands with trigger fingers so Punisher can only grip the handles, not fully get a convincing shootout pose. It should be a simple fix-up with an X-acto knife, but it’s something that should have been obvious to Hasbro.

Accessories: Unlike the typical Marvel Legends figure, Punisher doesn’t come with a Build-a-Figure piece. Hasbro set a nice standard on this front with a few regular wave figures making up for a lack of a BAF piece with a nice assortment of accessories. 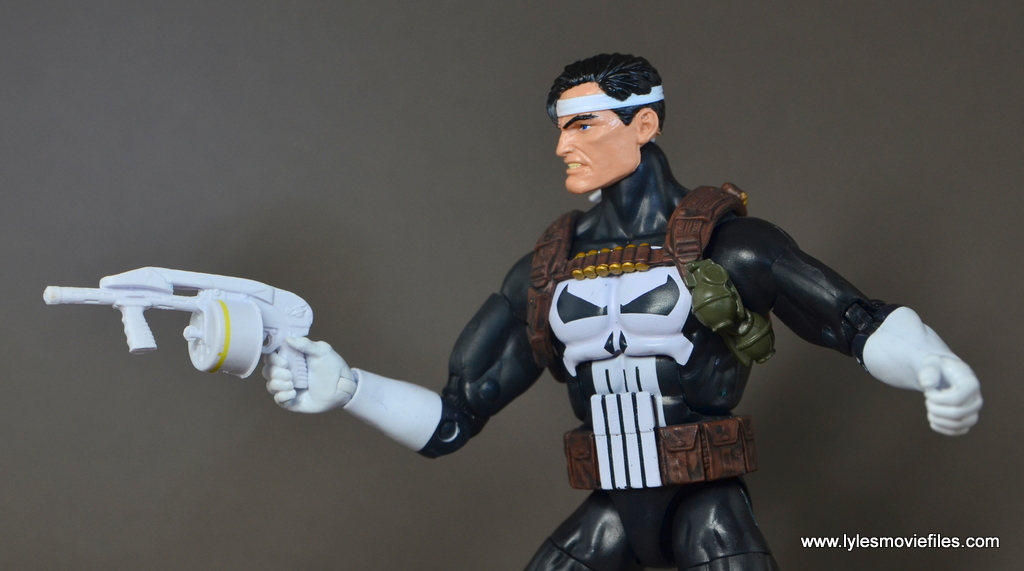 Getting an alternate head sculpt was a great start, but the other accessories are just as strong. Punisher comes with a shotgun, machine gun and a bazooka. They’re all fairly large scale accessories and it would have been nice to get a couple of pistols or smaller guns like an UZI. A knife would also have been welcome.

The machine gun looks nice and solid. It has a green middle section and top layer to break up the all black appearance, but doesn’t look cheesy. The bazooka is the same as we saw with Deadpool repainted army green and sans boxing glove. Frank’s shotgun is white with a yellow barrel line. White is an odd color for a shotgun, but maybe Frank used it at various points in Punisher War Journal? 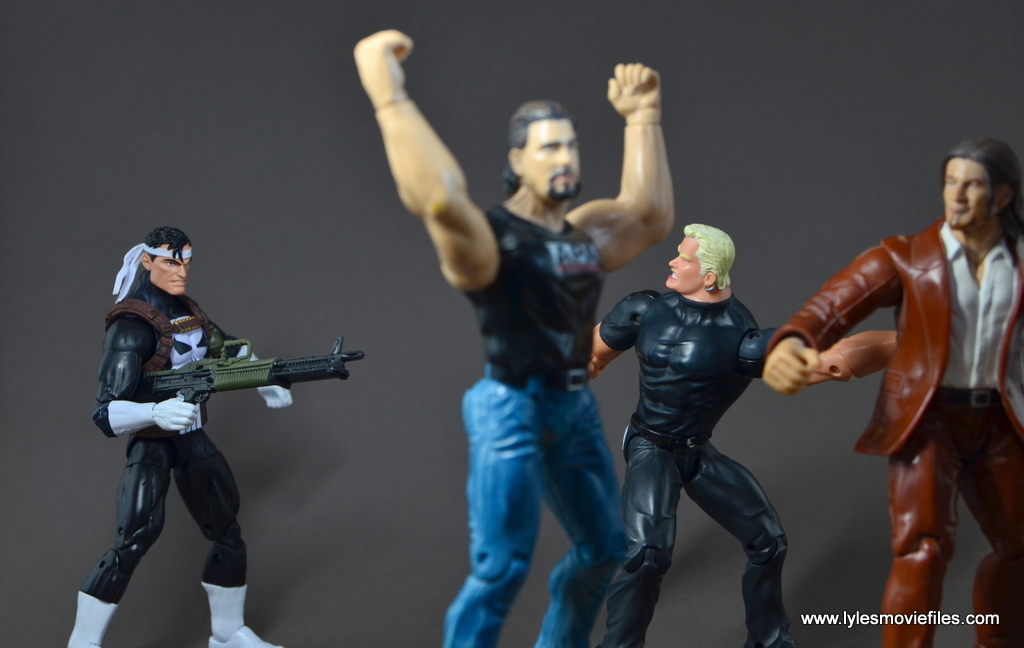 Worth it? If this were an underwhelming figure the lack of a BAF piece would make the $20 price somewhat sketchy even with the exclusive nature. Fortunately, Punisher is one of those exclusive figures worth tracking down and is a fair value for the price. 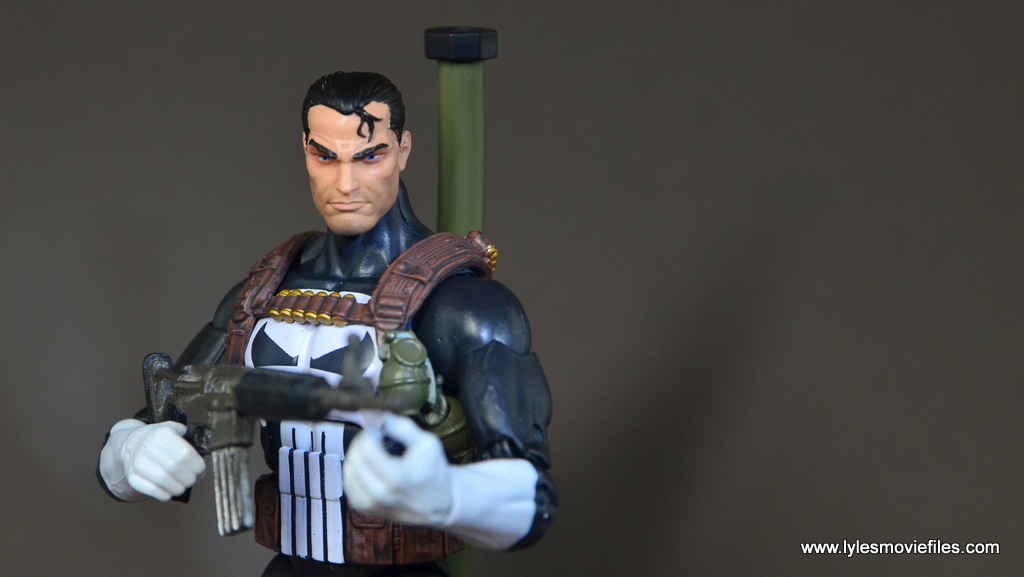 All that’s holding this figure back is removable web gear for a closer to classic appearance and trigger fingers. It’s taken a long time, but it looks like I can retire the Toy Biz Punisher from the shelf. This update is very well done and worth adding to your collection.

Where to get it? Punisher is a Walgreens exclusive. Typically that could be dicey for some retailers, but Walgreens has been outstanding in terms of exclusive coverage. Frank is no different. He’s been a more popular figure than say first appearance Daredevil or Ant-Man, but he’s starting to become more plentiful on shelves now.