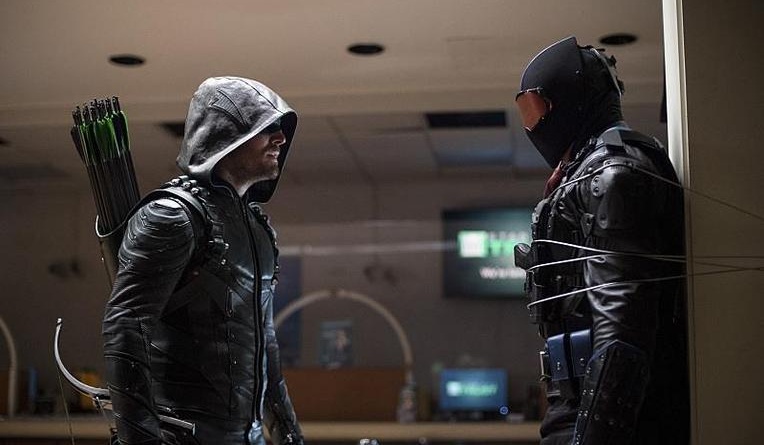 It’s astonishing to see Arrow make such a staggering about face. The second half of Season 3 and the roller coaster ride of Season 4 seemed to indicate the … arrow was trending downward for the former top dog of the CW DC Verse. Now, it’s Arrow that’s once again becoming the CW’s can’t miss show by doing everything right that the showrunners struggled with too often the last couple of seasons. Season 5 is making the case that with a renewed focus and back to basics approach, this season could rival the vaunted Season 2.

Team Arrow had been a step behind on several occasions, but their path finally crossed with Vigilante this week. He’d been in hot pursuit of a bank robber crew. I really appreciated the writers having Oliver call out the team for making excuses for Vigilante after coming down so hard on him last week.

Artemis got in a great line about who gets to decide who’s a psycho and who’s a vigilante. She has a point, but as another law-breaking vigilante, she shouldn’t look down too long from her high horse lest she fall down. 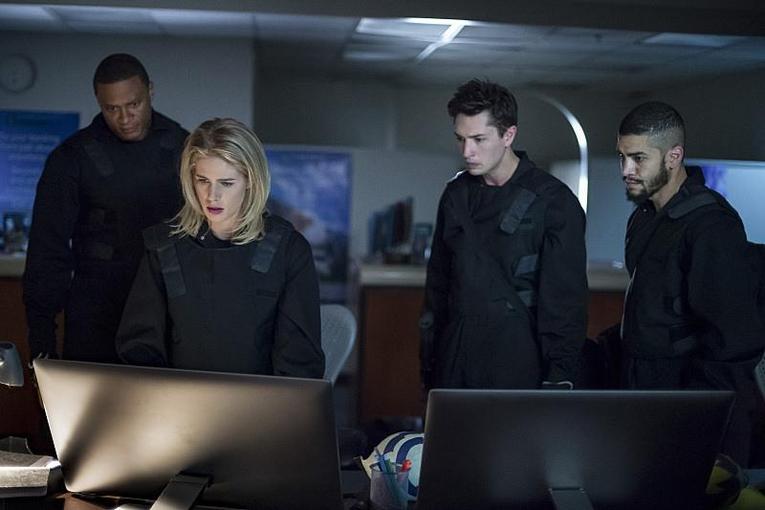 One of the biggest surprises this season has been the enjoyable dynamic with Quentin and Thea. I’ve always found the show’s portrayal of alcoholism very realistically. Just because a character can stay on the wagon for a while doesn’t mean they’ll never have a relapse. I loved that Thea hasn’t given up on Quentin and is playing in essence his surrogate daughter. On the downside, the episode seemed to write Quentin off the show at least temporarily.

Another surprisingly enjoyable pairing is Rene and Diggle. Softening up Wild Dog was necessary to prevent him from becoming an obnoxious character. Having him being the one to ensure Diggle got to celebrate John Jr.’s birthday was a nice touch. Diggle is bonding with the team in a way Oliver isn’t and eventually I could see Diggle leading these guys without Green Arrow.

The Bratva flashbacks had a pair of shocking events with Oliver learning Taiana’s mother was working as Kovar’s maid and Kovar is in an alliance with the Bratva. How that will play in to Oliver’s plan for payback and his future role with Bratva is now very much in the air. But this mystery is good in keeping what could have been a straightforward flashback unpredictable.And how great was it to see Dolph Lundgren getting in some Ivan Drago-like shots on Oliver? 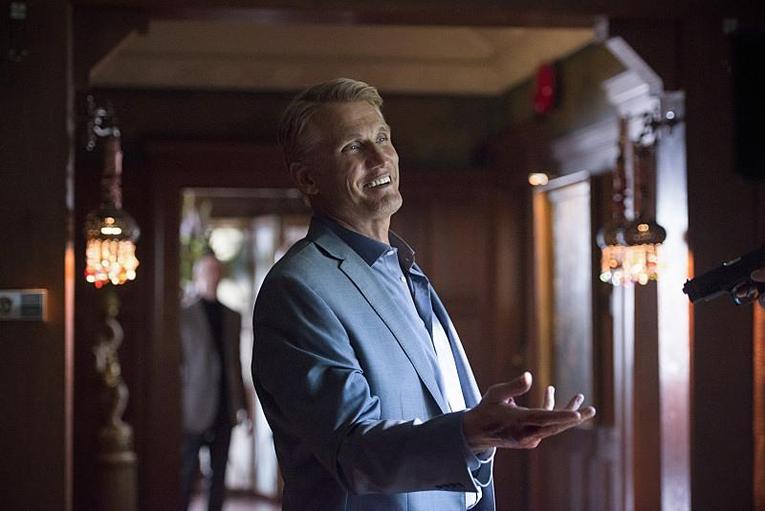 Arrow has struggled with Oliver’s love life except for that one brief peaceful interlude with Sara, but the budding romance with reporter Susan Williams is promising. There’s a lot of Season 5 to let it play out as well as explore how her photograph of Oliver in Russia will affect their potential. The writers smartly aren’t rushing in to it and letting it unfold slowly.

Oliver needs a sounding board away from his team. I liked that Oliver voiced concern his methods weren’t as effective as Vigilante’s tactics. This isn’t the normal hero coming down on themselves, but with the shades of grey in the differences between Green Arrow and Vigilante, it’s a fair debate.

Team Arrow’s initial encounter with Vigilante was fun. The costume design kept the important elements of the comic book design while updating it for the paramilitary real world approach that’s been the trademark of the show. 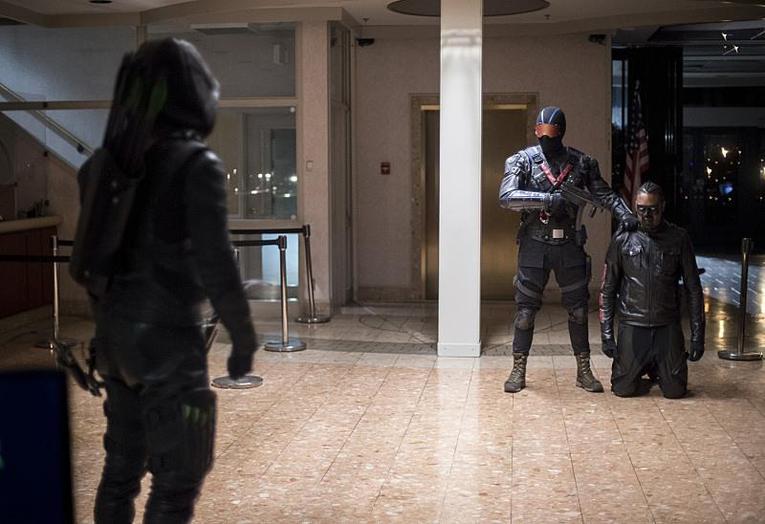 I’m loving how the layers are slowly being peeled with this storyline. Oliver was impressed with Adrian Chase’s interrogation tactics, but it was clear he was also somewhat taken aback. Green Arrow/Vigilante Round 2 was played out very well and gave Oliver an excuse to break out his net arrow. The show can’t ever do enough trick arrows for me, especially with Oliver trying to be less violent on the streets. The Vigilante/Green Arrow fights continued the season’s stretch of terrific action sequences that incorporates the weapons to make it more than a simple fistfight.

Just as it seemed the mystery of Vigilante’s alter ego was going to be solved, Green Arrow falls for the old tamper proof mask. This delayed payoff works as Oliver needs to start getting curious about the man behind the mask, not just what he represents.

It’s real fitting that in a season that’s lifting a significant character from Teen Titans, that the show is borrowing a major plot point. The reveal that Artemis is in league with Prometheus definitely conjures up some thoughts of The Judas Contract. And maybe, just maybe Prometheus’ identity is a lot more interesting than Felicity’s boyfriend?