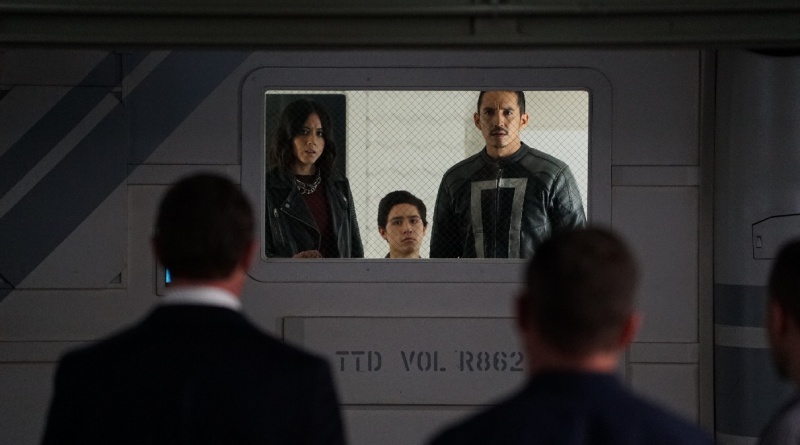 With the origin of Ghost Rider, the reveal of the season’s actual villain and an unexpected cameo, The Good Samaritan marked a new high point for what’s been a thrilling season.

Turns out Uncle Eli was right where he belonged when he was behind bars. In a nice twist, Eli was revealed as the culprit behind the ghosts’ creation.

I’m curious if the Darkhold book isn’t like the Middle Earth series’ One Ring in that it causes intense lust and a power mad spirit around easily corrupted minds. Either way I’m glad Lucy and her fellow ghosts’ nutty plan was ultimately a red herring.

The ghosts’ special effects have been so weak that they were undermining the otherwise exceptional quality of the CGI this season. Still, if weak ghosts are the necessary compromise for a kick-tail looking Ghost Rider that’s a trade-off I’m comfortable making every time.

There was a lot to love in this episode, but I’ve got to go the predictable route and declare Robbie’s Ghost Rider origin the best moment of the season so far. I’ve grown accustomed to the Marvel Cinematic Universe creators taking bits and pieces from comic book lore and work them in as needed. With Robbie’s appearance, it was an easy assumption that he was going to be the MCU’s Ghost Rider. Instead, Robbie got his powers and second lease on life from The Ghost Rider — complete with motorcycle and traditional flaming skill. 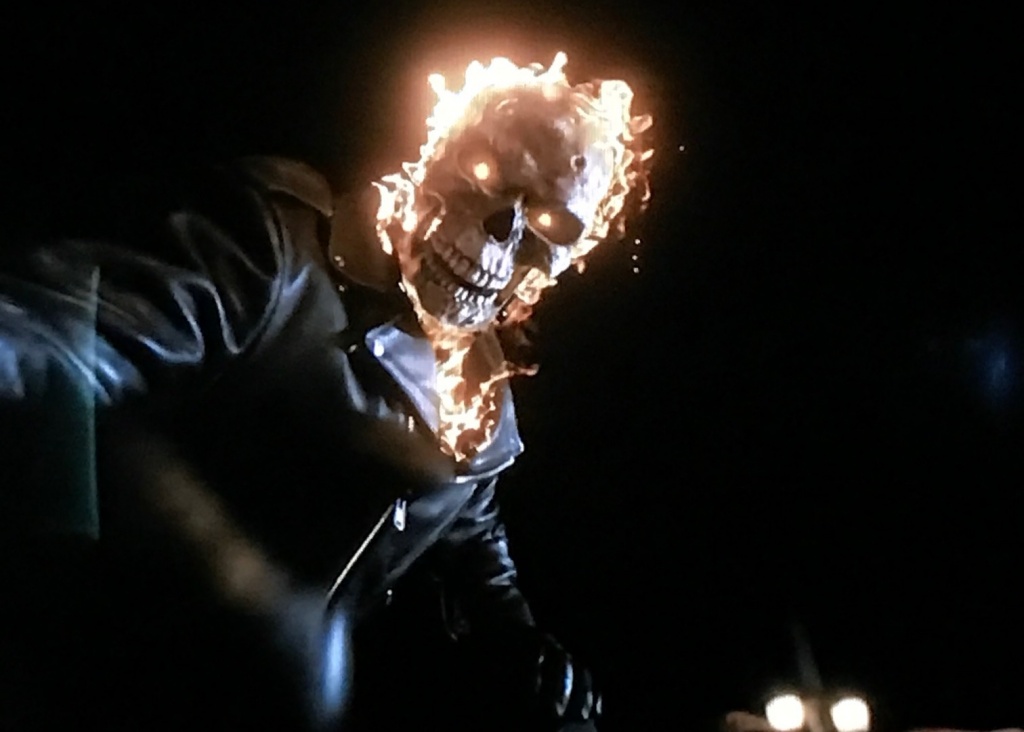 While the sequel’s quality is debatable, the first Ghost Rider movie was actually pretty good. Making the motorcycle riding Ghost Rider the Good Samaritan allows the possibility that those Nicholas Cage films are part of continuity. That’s a smart move even if the OG Ghost Rider never returns. Although that does pave the way for the old school version to headline a Netflix series.

SHIELD had a cool tagline a few years ago about everything being connected. It was neat seeing that unfold with Robbie’s Ghost Rider tale. ‘Borrowing’ his uncle’s car unwittingly put him in the sights of the gang members hired by Lucy, who hired them to go after Uncle Eli.

The mounting tension between Coulson and Mace made some solid progression this episode. While it’s easy to blindly pull for Coulson, Mace has so far proven to be a reasonable director of SHIELD. It’d be easier for the writers to paint Mace as this annoying irritant merely around to make Coulson’s life miserable. Thankfully they’re taking a tougher route. And it figures that Coulson’s favorite underrated Star Wars character would be Admiral Akbar because he’s such a random choice. 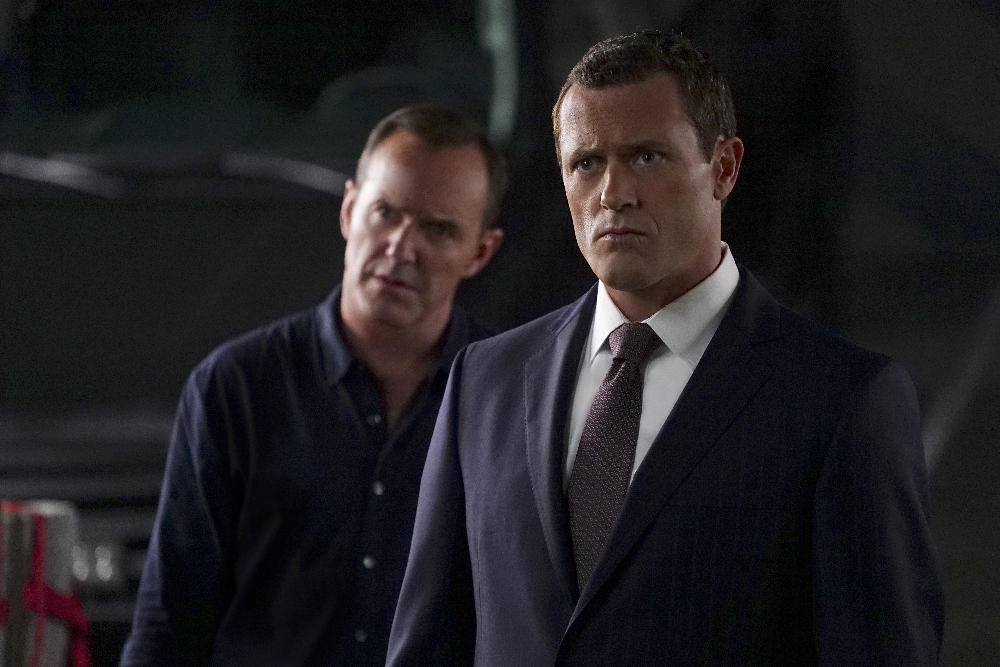 I was a little disappointed that Mace didn’t fight back against Ghost Rider just cause that seemed like it was going to be a fun battle. It definitely seems like the writers are saving Mace’s power reveal for later in the season and if so, that’s a smart move. There’s enough going on right now that Mace’s Superman shtick can be held off.

While Mace sending Simmons off to some undisclosed location seemed shady, he was sensible enough to let Ghost Rider go into action to help stop Lucy. Too bad the team didn’t recognize Eli was the problem until right before he launched the quantum power cell. Instead of giving everyone super speed and other powers, the team vanishes. That’s definitely preferable to being a badly animated CGI ghost. 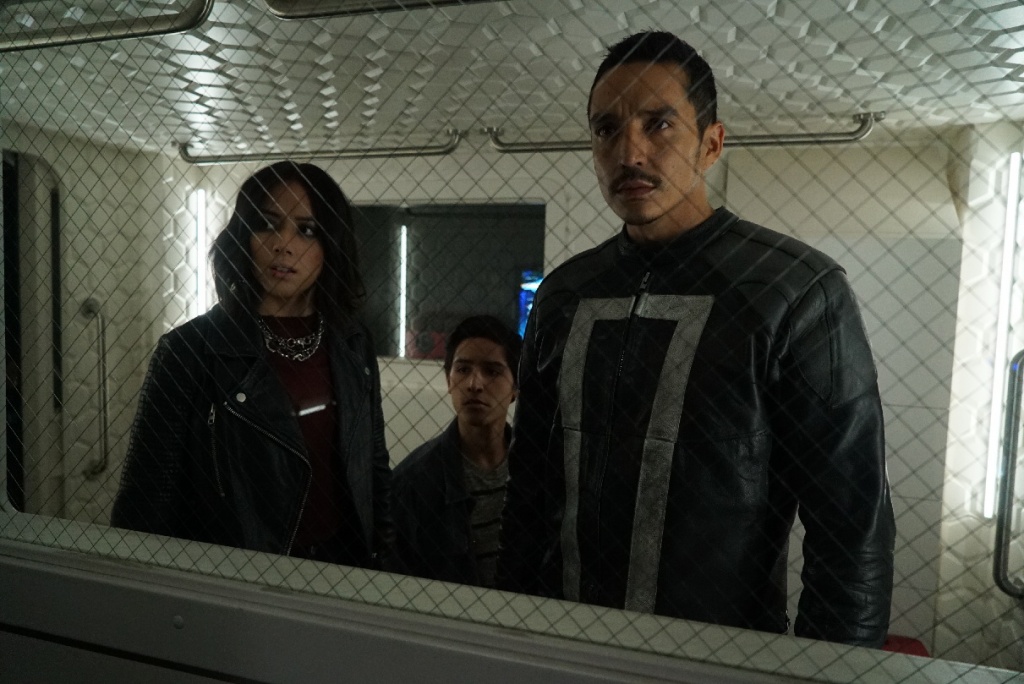 The Good Samaritan certainly helped focus the season as SHIELD now knows the real threat and split the team again. With Fitz and Coulson among the missing, it’ll be interesting to see who leads the charge to get them back. Regardless, this season only looks like it’s just begun to heat up.

Catch up on all of Season 4’s episodes with the Agents of SHIELD Episode Guide.