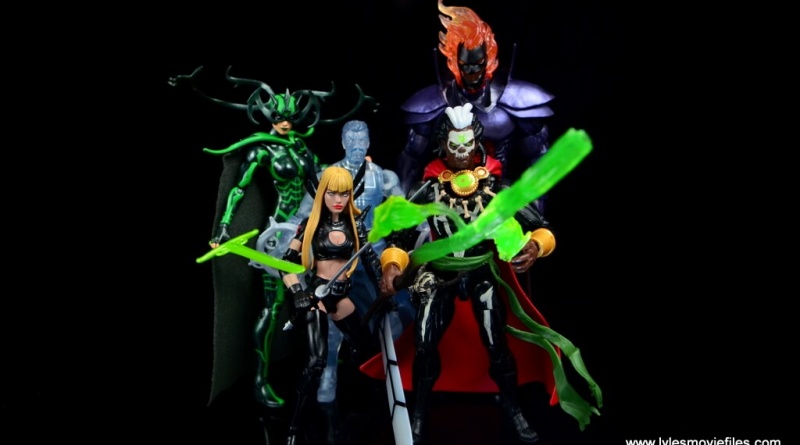 When it comes to doing San Diego Comic Con exclusives, Hasbro really goes all out with its Marvel Legends line. With Doctor Strange fever hitting, I figured it was appropriate to look at Hasbro’s Strange based set — Book of the Vishanti — one of my favorite Hasbro efforts yet.

The set contains Doctor Strange in his Astral form, Brother Voodoo during his reign as Sorcerer Supreme, Dormammu, Hela and Magik. In an era where characters like Speed Demon, Misty Knight and Machine Man get retail release, I doubt any of these would be problematic peg warmers, but I appreciate getting so many new figures in one set. That’s enough set up, let’s break this one down.

Packaging:  There’s a certain high level of stress involved for all of the Hasbro SDCC exclusives. The Vishanti set was definitely no different. All that panic and constant refreshing faded away the moment I opened up the box to reveal one of the more clever packaging jobs of any line.

It’s a real scale Book of the Vishanti with pages and everything. The packaging is a fairly thick cardboard and the pages are equally durable. You wouldn’t want to fling it around, but it will hold up to reasonable wear. The pages aren’t random scribbles,  but actually have meaningful text to delve into Doctor Strange’s world and the characters in the set.

The figures get a very classy presentation as they’re positioned in a red velvet-like frame. I’m not a huge MOC guy, but this set is definitely one that looks so great, I almost didn’t want to free up the figures. 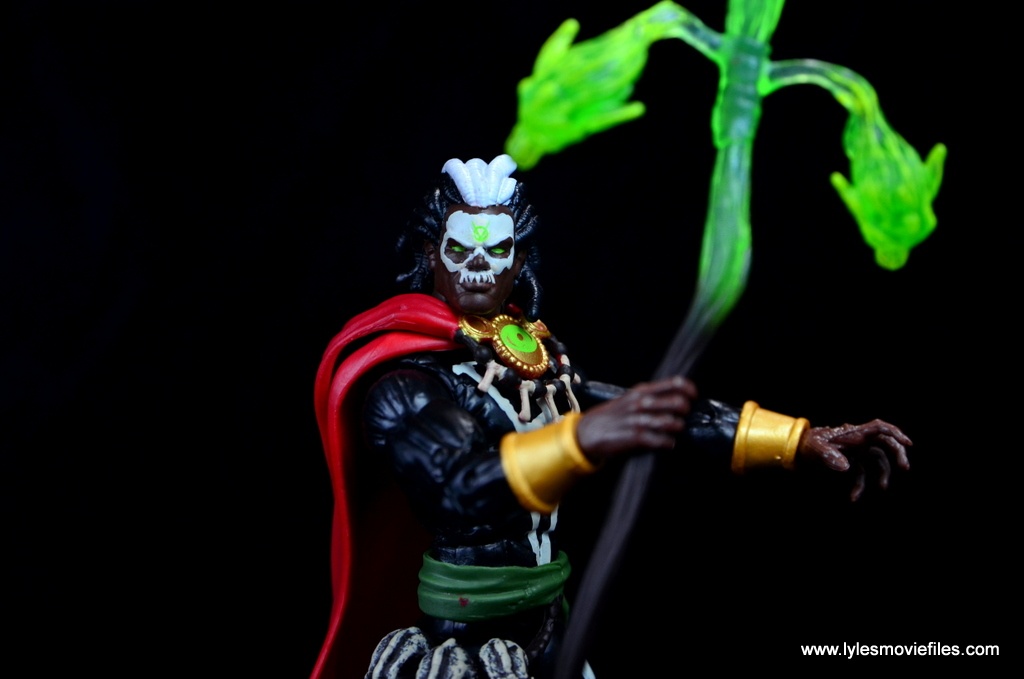 Likeness: Brother Voodoo gets the modern twist instead of his classic appearance. Way back in the day, Hasbro showed a prototype of BV in his old school garb. Since that reveal, BV had a cup of coffee as the Sorcerer Supreme and that’s the look reflected here. It’s definitely not a bad look, but I’m also not the biggest fan of characters ditching their identity to become another hero.

That gripe aside, there’s plenty to love about the execution. The cape with the Eye of Agamotto and voodoo necklace makes for a very cool visual. The skulls and sash hang nicely while the gold bands set off the look nicely. BV’s dreadlocks are sculpted well with great attention to the texture so they don’t just look like assorted strips atop his head. 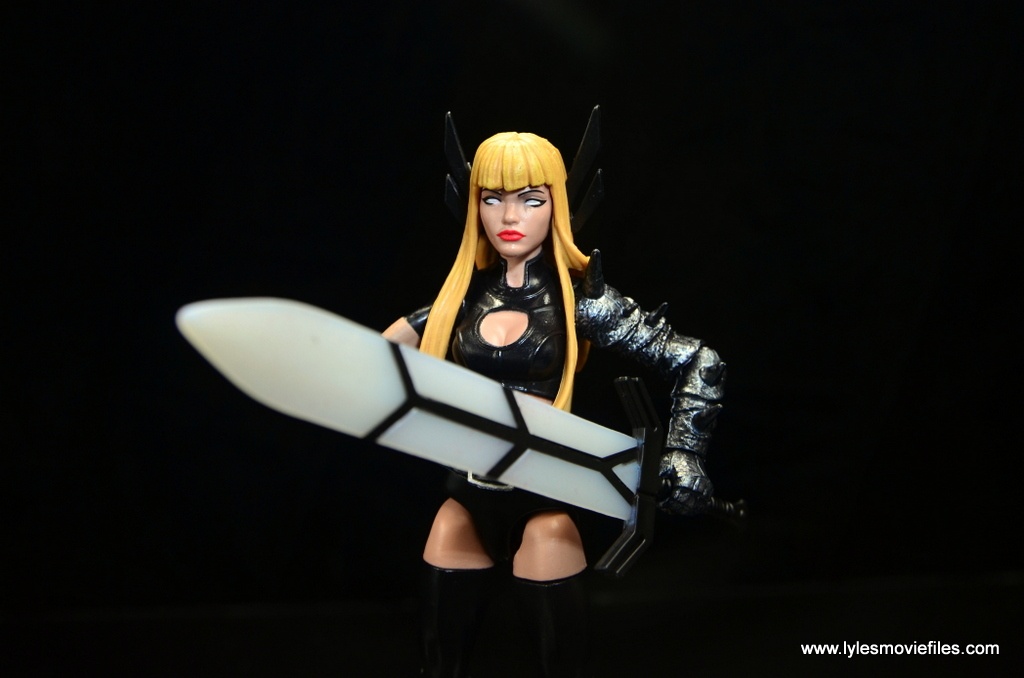 I always tend to skew classic for attire choices and would have preferred Magik in her New Mutants look. That’s a team I’m far more interested in building especially with the upcoming Warlock Build-A-Figure in the next X-Men wave.

Regardless of my preference, this is a really great looking figure. There’s a surprising amount of detail for a one-off character. Illyana’s metallic arm is an original sculpt with a ton of detail and spikes. The belt isn’t secured and will rise up with every little movement. That’s a weird move since Illyana doesn’t have waist articulation that would be hindered by a large belt. I’ve seen some instances where Magik’s thigh high boots are more intricate with more straps and wider knee pads, but this streamlined look is also accurate. 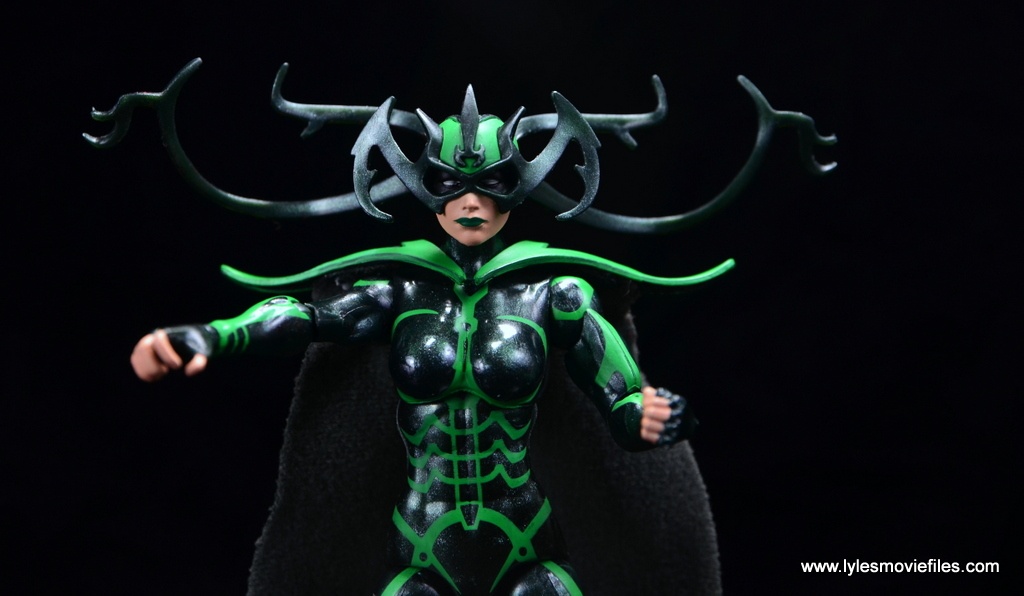 Hela’s look tends to change depending on who is drawing her, but the figure captures the core aspects of the character. Of most important note is the distinct headpiece and extended shoulder armor and cape. Hasbro tends to use plastic for figures, but in this case, going cloth is helpful as Hela is a character that’s typically sitting on her throne in the underworld. 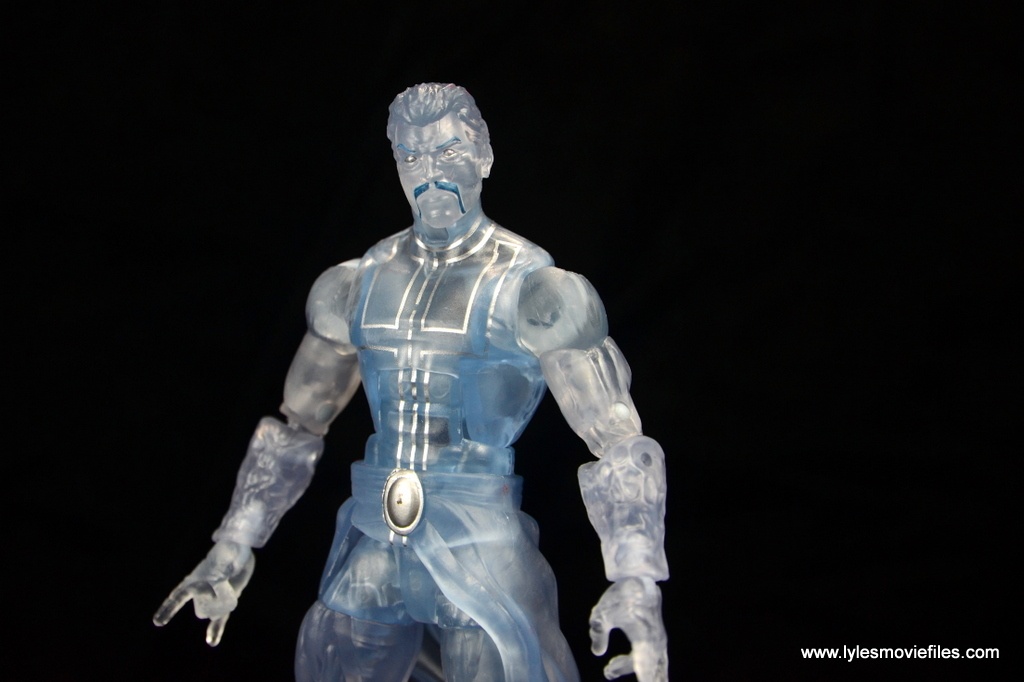 Doctor Strange is simply the Hulkbuster Iron Man version cast in a clear blue plastic. It’s simple, but effective way to translate Strange’s Astral Form to the line. The plastic works well as it gives that transparent look without being to clear that you see all of the inner workings and joints of the figure. 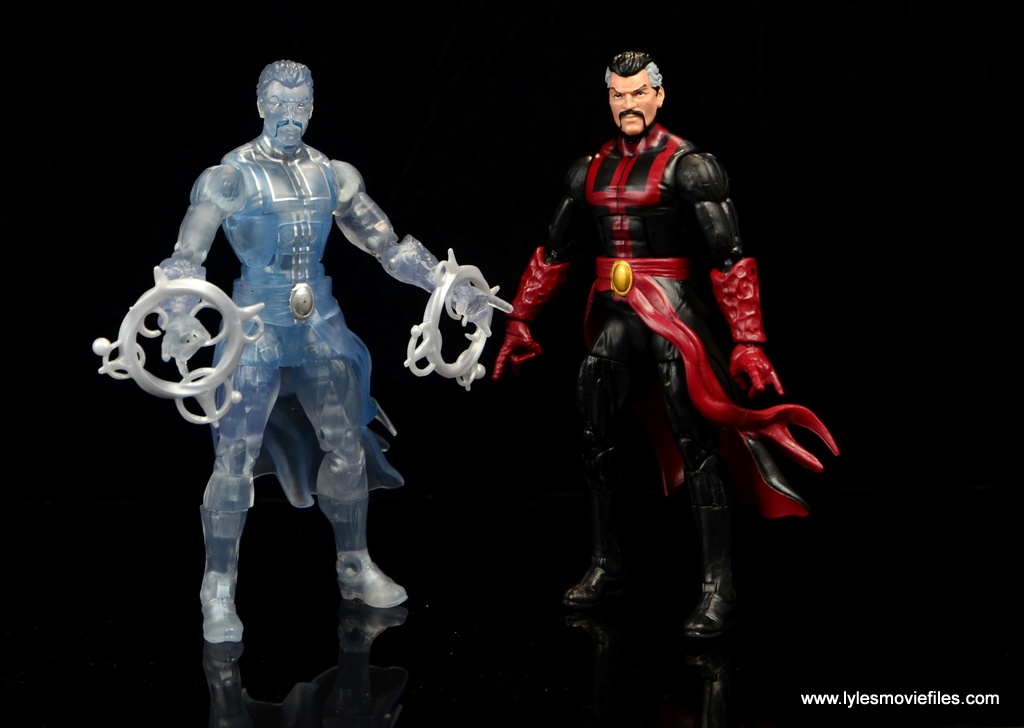 For a cool evil entity, this version of Dormammu looks great. Surprisingly, I’m partial to the old school appearance, which I think would have worked better in an exclusive set. That was even before Dormammu was revealed as the BAF for the Doctor Strange movie wave. 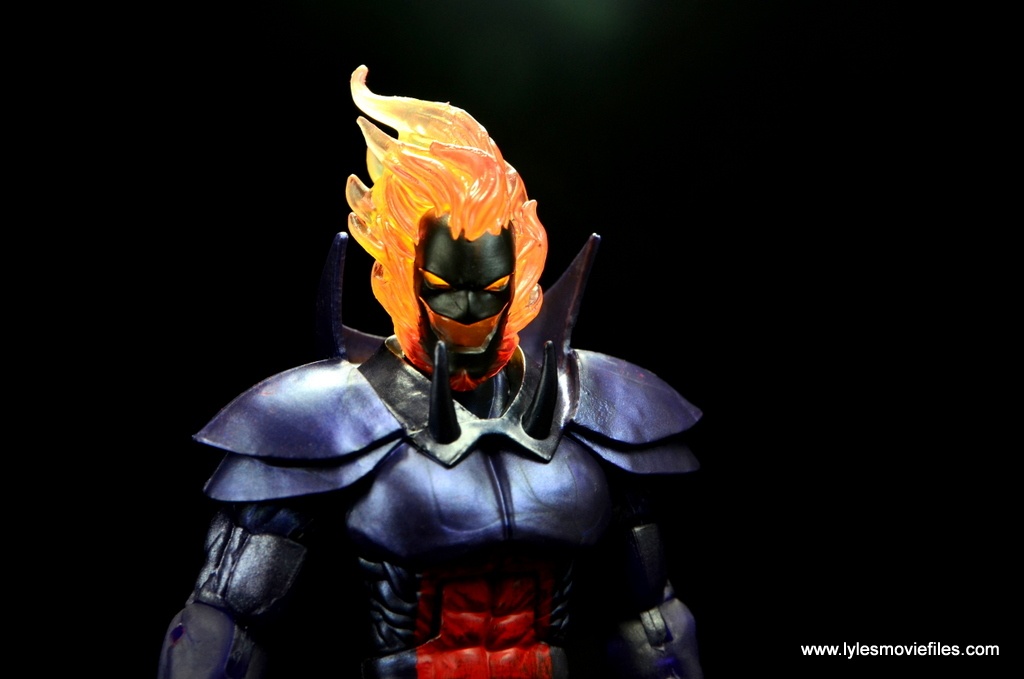 My version preference aside, this is a really cool looking figure. The layered armor design definitely offers up thoughts of the final boss and the head in flames is done brilliantly. 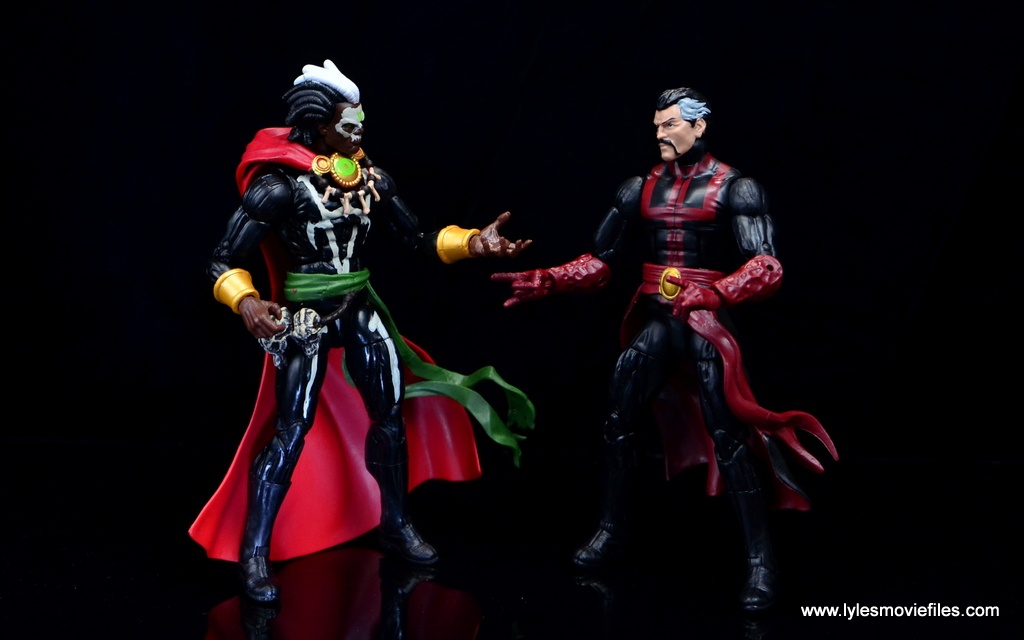 Scale: Brother Voodoo and Doctor Strange both use the standard size body, which is fine for regular sized guys.

Magik is using the smaller teen female body, which seems right. This version of Magik seems to get shorter or taller depending on how high the artists wants to make her platform boots. I’ll chalk the figure up to being scale accurate even if it emphasizes the X-Men Legends Kitty Pryde is definitely too tall. 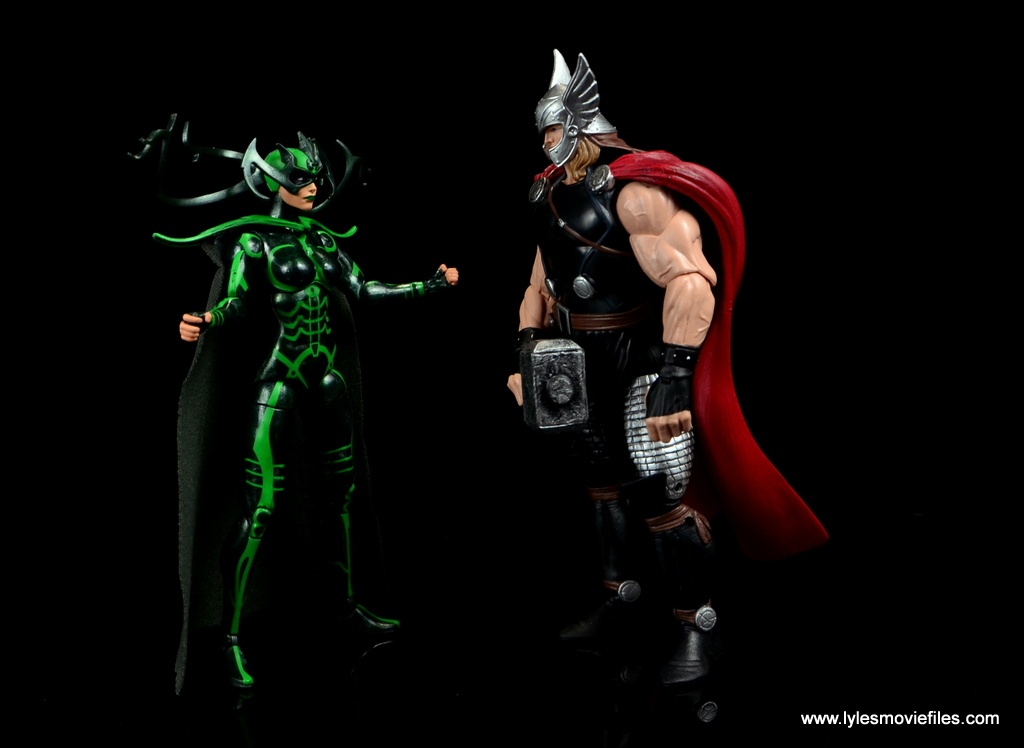 Hela is an Asgardian and Hasbro has taken the approach that means she’s taller than the average figure. I kinda like that in this case as it makes her look even more imposing. 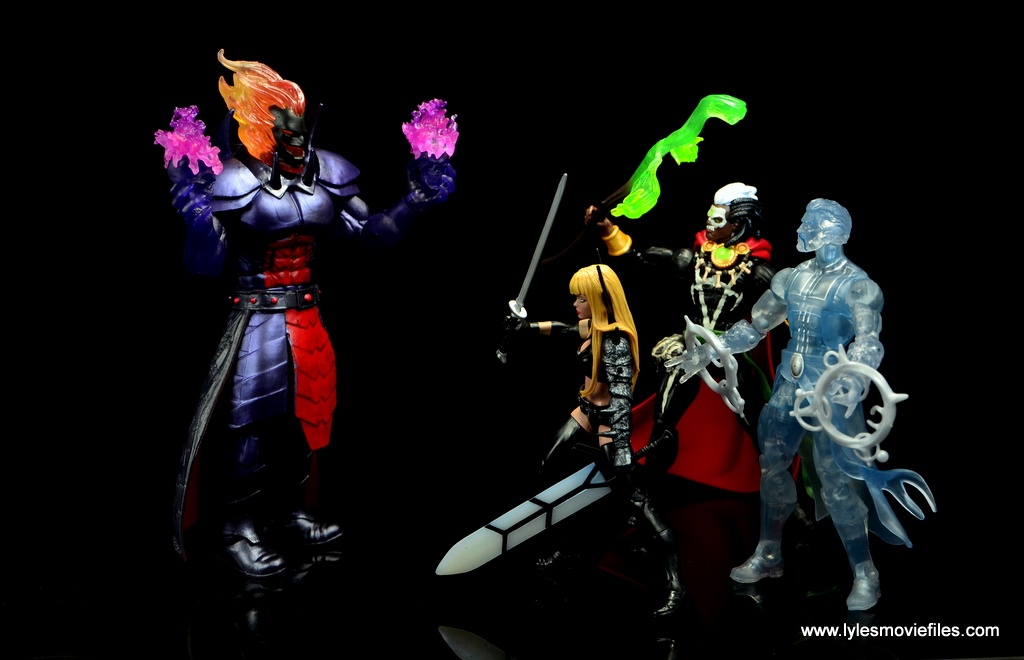 Dormammu is BAF size and is thicker, wider and taller than the typical figure. That plays in well to his role as Doctor Strange’s most dangerous foe.

Paint: Brother Voodoo’s painted on skeleton outline was a risky choice, but it really looks great. Hasbro’s team did an outstanding job capturing that voodoo flair right down to the face paint looking like it was done by hand, not carefully applied with a makeup team.

The Eye of Agamotto tampo is just slightly off center, but everything else, including the wash on the skulls is exceptional. 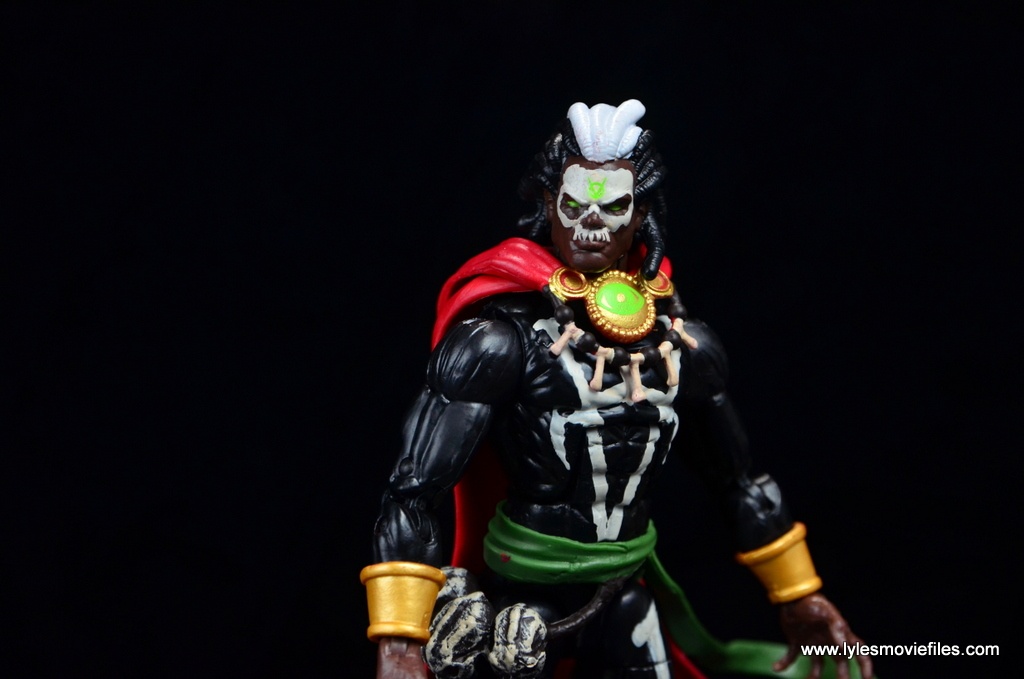 Magik is fairly simple paint wise at first glance, but there’s more work here upon further inspection. Magik’s hair has a wash that does an excellent job replicating how some comic book colorists handle blonde hair. Her metal arm has a nice wash to get that metallic look down. 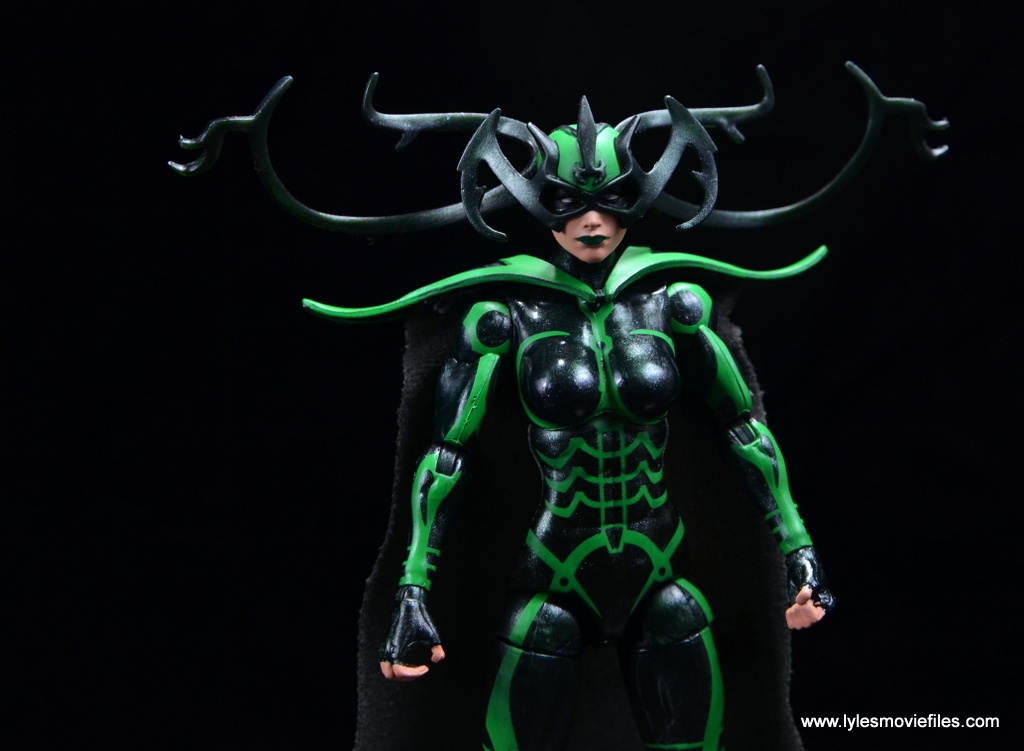 Hela is the most complex of the set in this category. She’s got this intricate pearlescent green and black base color with a more detailed pattern. It looks outstanding and really sells that Asgardian god-like presence.

Even in his astral form, Doctor Strange isn’t completely colorless. There’s some silver trim to bring out the attire details and his mustache is painted and his eyes whitened. I had a small stray scuff on the belt amulet, but otherwise the paint was solid.

Dormammu’s armor looks outstanding as it has a glossed-up paint to reflect the armor. Other areas have more of a pearlescent purple with the hands being translucent. 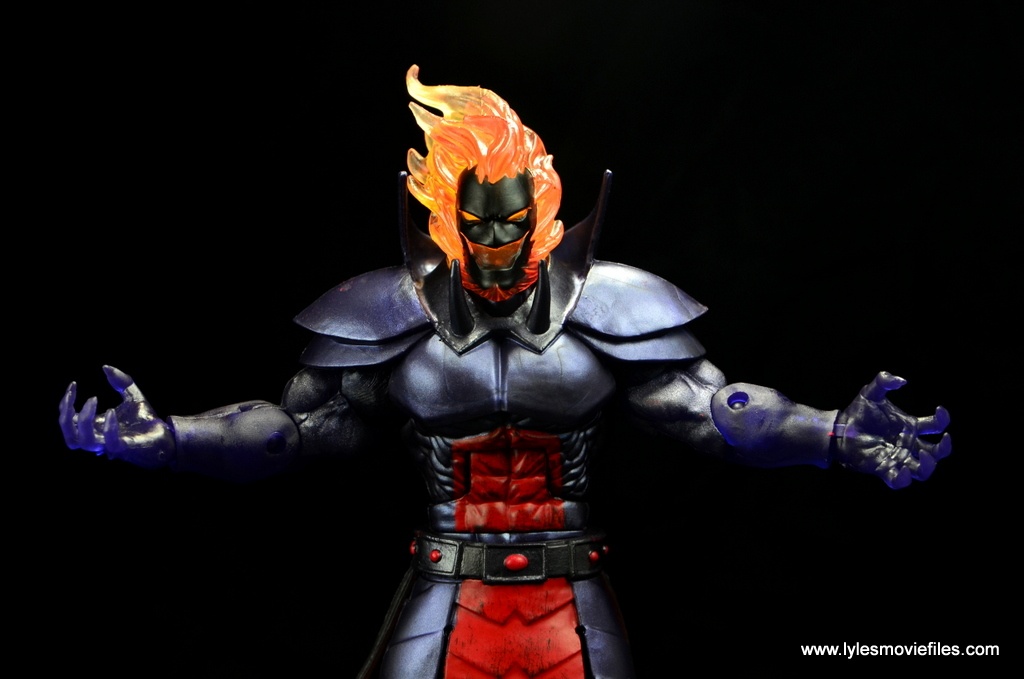 There’s some really nice colors here. As a result, I don’t think the coverage of the red skirt piece is so much an awful oversight, but an attempt to make it look more stressed and battle worn.

It doesn’t quite work, but it doesn’t distract from the main selling point — the flaming head. With orange and yellow translucent effects, Dormammu’s head really looks great. It’s one of my favorite aspects of the set and comes off outstanding even in natural light.

Articulation: Brother Voodoo and Doctor Strange have the same body so their articulation is similar. They use the basic Bucky body, which offers the most comprehensive, poseable option available. 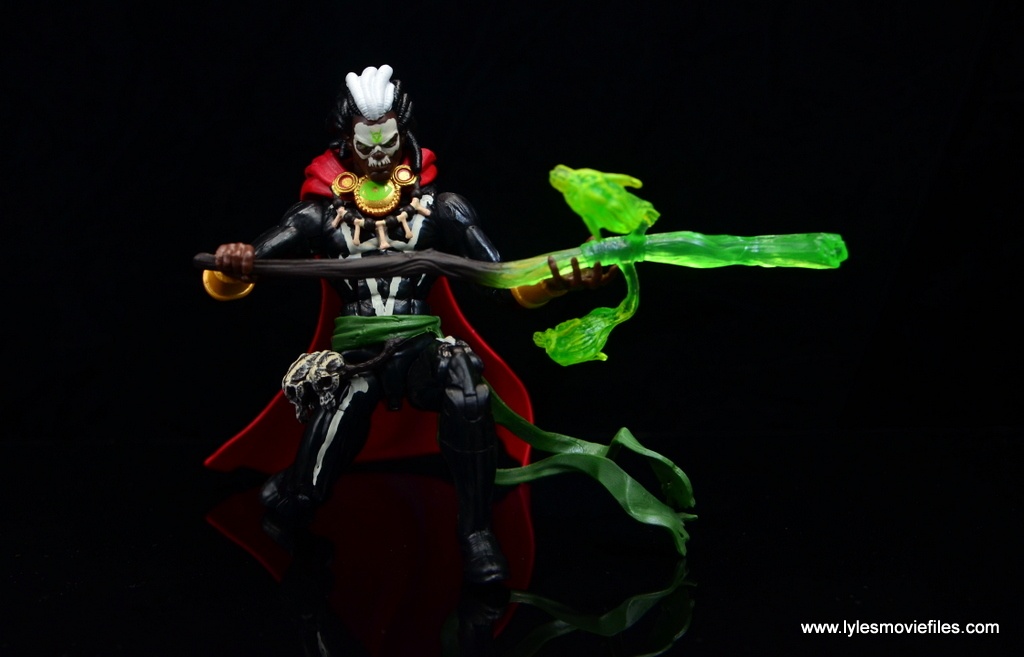 BV’s cape is back far enough that his articulation isn’t hampered by it so he can achieve pretty much any pose necessary besides sitting at the dinner table. 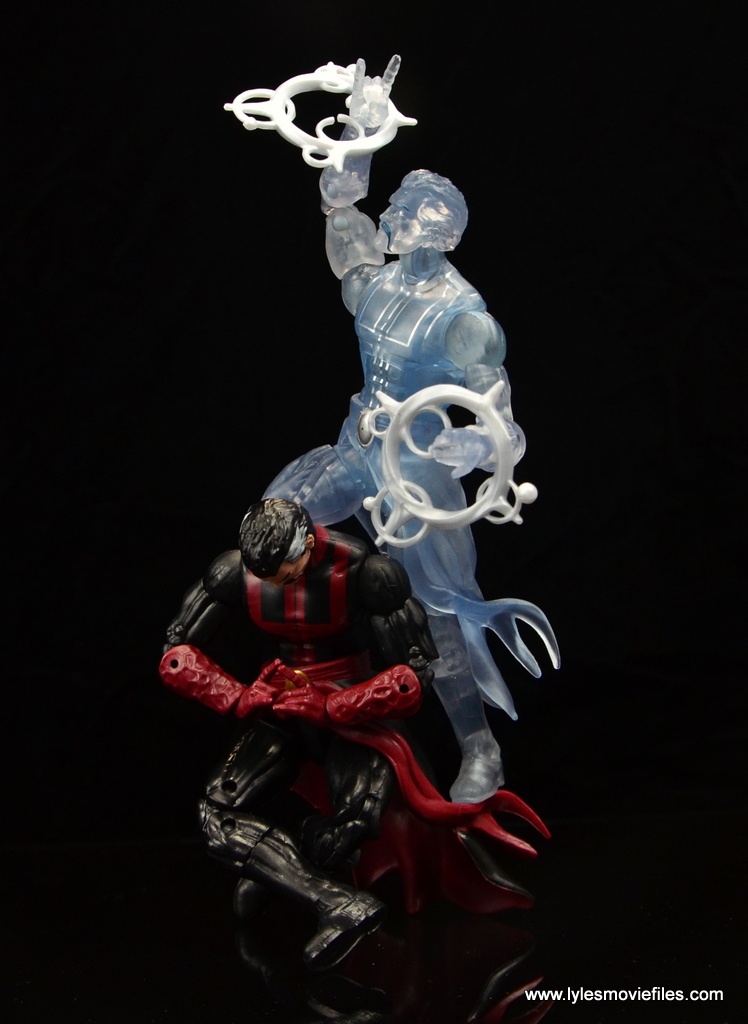 Magik has an excellent range of motion and her hair is made of a soft enough material that it doesn’t hinder the side to side movement. The ML female articulation scheme does the best job of accommodating the female shape with articulation, but there’s some complications as a result — namely the back and forth range with the hips. 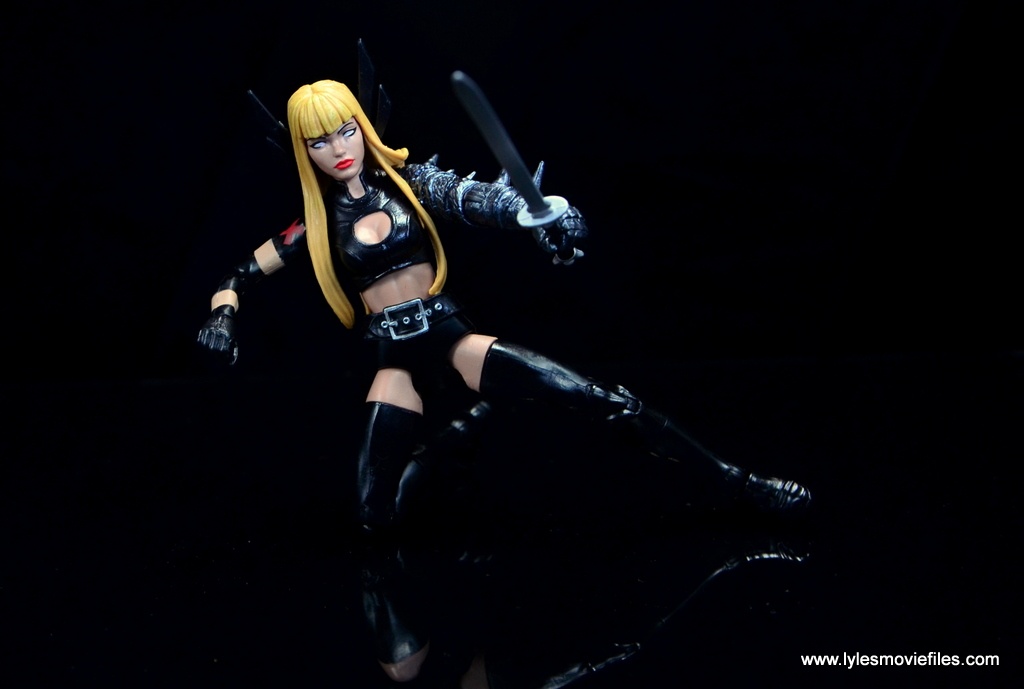 It’s really just a tad less than I’d like. Of the set, Magik is the easiest and most fun to pose, which is a big win for her in this category.

Hela has a strong articulation setup. She’s not much by the way of a combatant, but I was able to get Hela in the most fitting action poses. 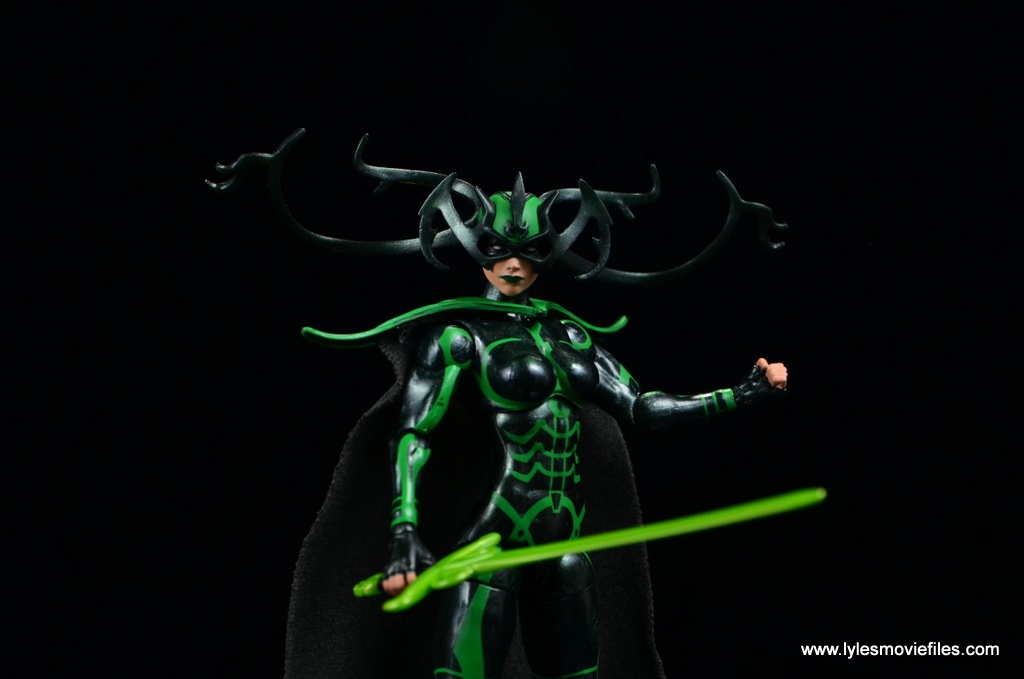 Below the waist, Dormammu is heavily restricted thanks to his armor skirts. Hasbro went with a sturdier plastic, which largely negates his leg movement. Dormammu is another of the look tough and gesture style villains so this isn’t a major problem even if more leg movement would have been nice. 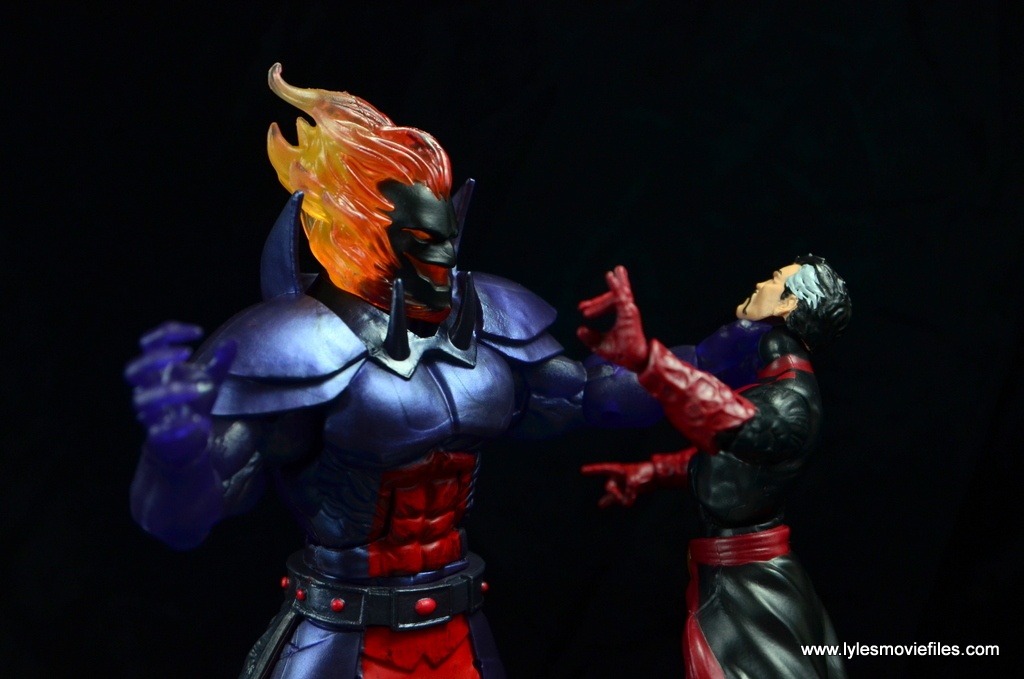 Accessories: Impressively for a box set, each figure gets at least one accessory.

Brother Voodoo comes with his staff complete with voodoo spirit being let loose. The staff is partly translucent with ghouls springing from it, which was a really nice touch in conveying his powers in action.

Magik gets two swords — one her Limbo ferrying Soul Sword and the other a standard battle ready smaller version. The smaller sword has some great detailing on the handle and only doesn’t look better in comparison to the Soul Sword.

The Soul Sword has some nice interior details with all the panels segments actually sculpted on instead of a quickie paint job. That’s much appreciated as it makes the sword that much more impressive. 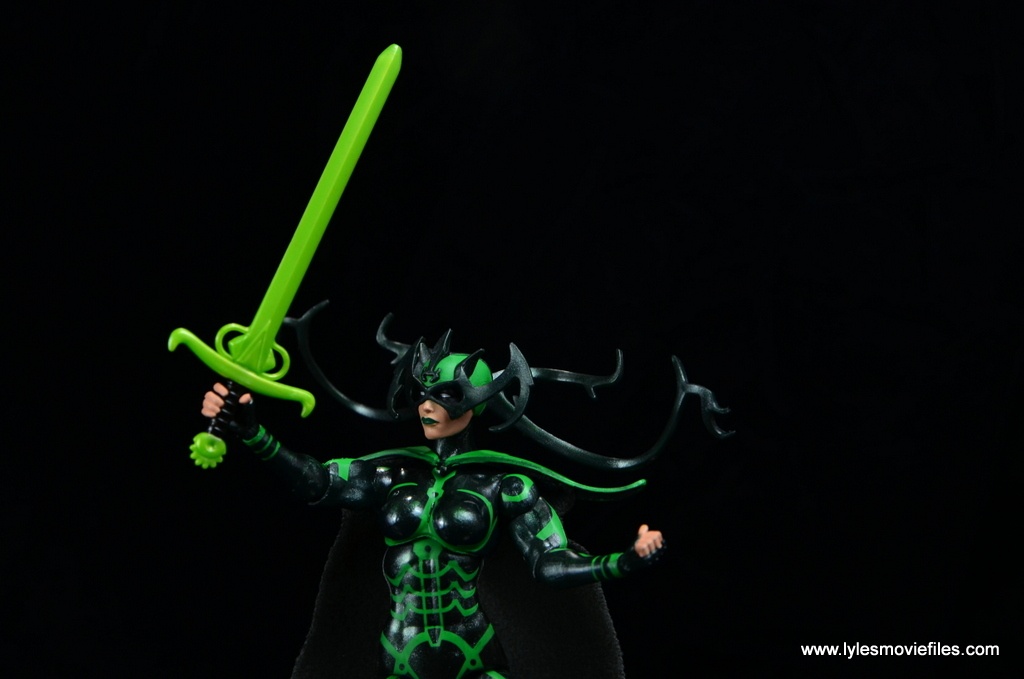 Hela gets her own sword. It’s mostly a bright green, but has a black handle to give it more of a magic sword look as opposed to a plastic toy visual. 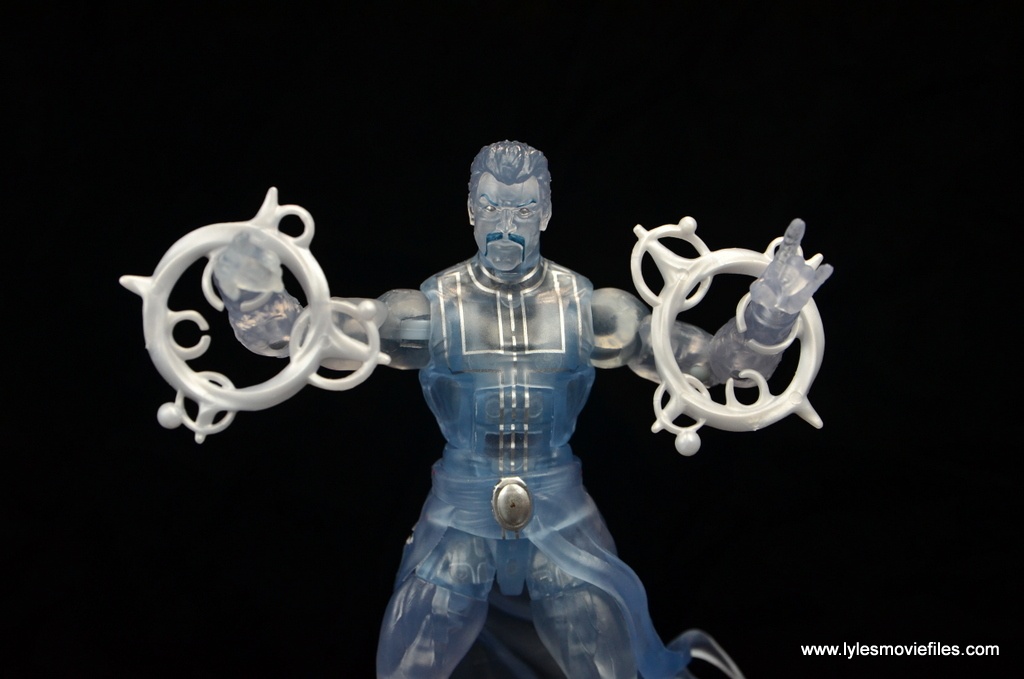 Doctor Strange has two clear spell bolts. These are simply repainted versions of the ones that came with the original figure, but I appreciate the extra attention to detail in extending the astral theme to the spell effects. 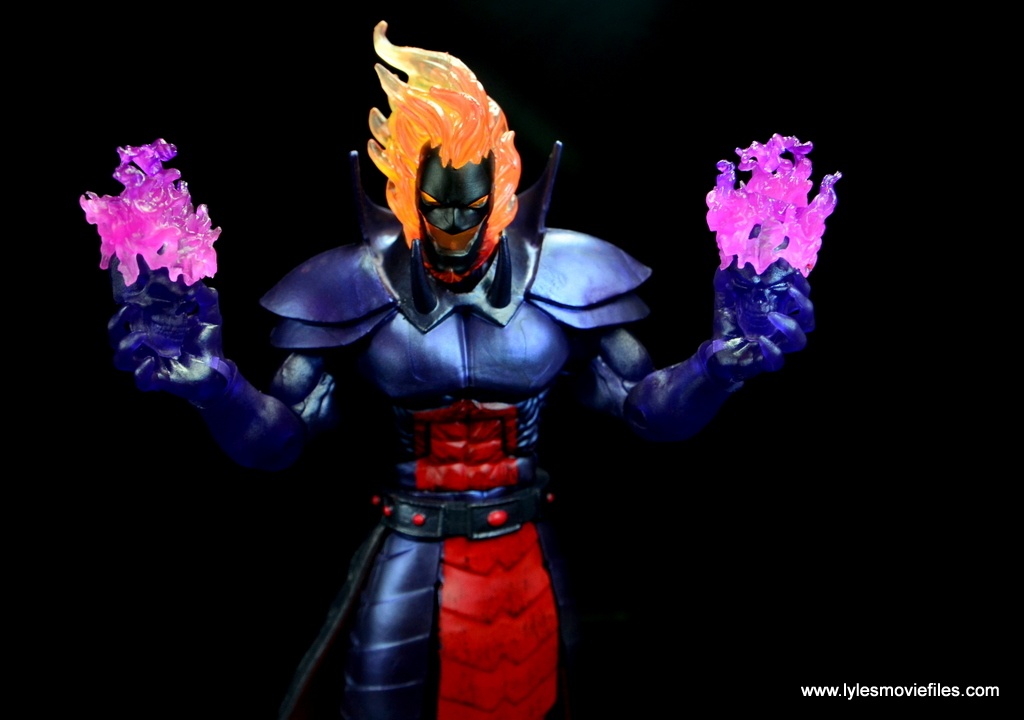 In keeping with his whole being a sinister evil spirit, Dormammu gets two flaming heads. These are repainted versions of the Ghost Rider head. They’re a nice effect for Dormammu even if I’d like a chain to connect them that could be draped over his neck.

And just in case I was feeling left out, an eye of Agamotto is also included. Time to dust off my Cloak of Levitation to join in on the fun.

Worth it? I’ve seen prices range from $230 to $370. That price is probably too high for the average collector, but this is definitely one where Hasbro put a lot of thought and effort into it and the presentation is stellar. 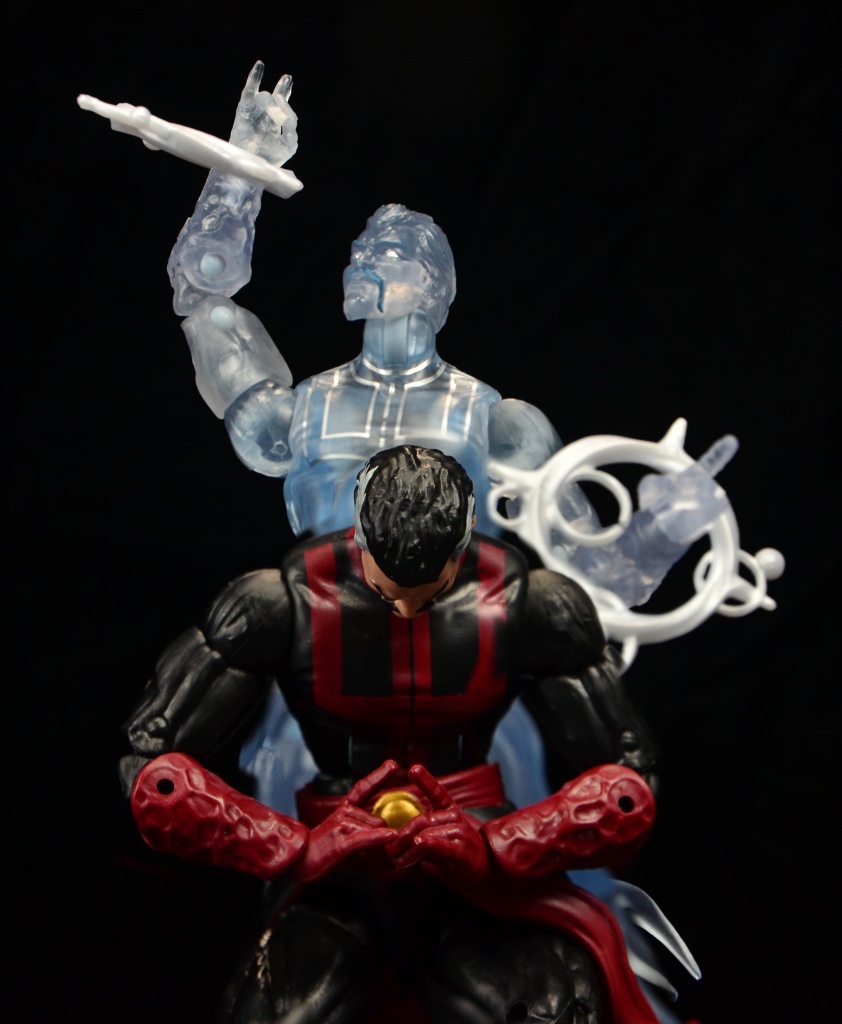 Where to get it? Amazon has it in stock, but you’re really better off stalking eBay as they have some decent priced auctions.