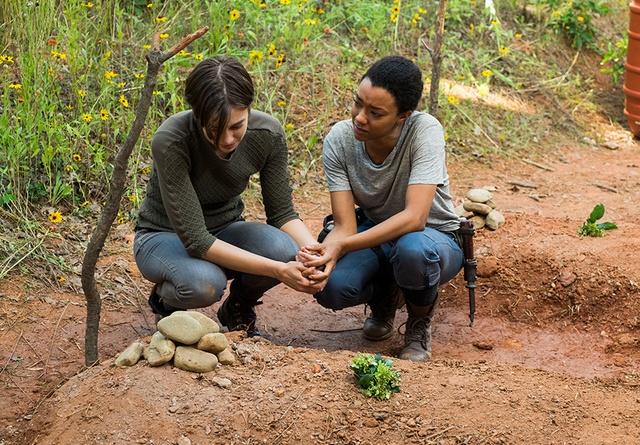 Pay close enough attention and Go-Getters offers more promising signs for the eventual end of Negan and The Saviors. Granted, this was another episode that devoted a lot of time to reinforcing that The Saviors are a bunch of bullying jerks, but this provided some rare reason for optimism.

After checking in on Rick and Alexandria, Daryl’s encounter with Dwight and Carol & Morgan getting acquainted with The Kingdom, it was long past time to see how Maggie and Sasha were coping. Of the group they were the ones impacted the hardest. Maggie lost her husband and father of her child, but Sasha lost her potential future boyfriend. In the wake of Bob and now Abraham, it’s clear Sasha has awful luck attempting to take any relationship to the next level.

Since carrying their loved ones’ bodies to Alexandria wasn’t possible, Sasha buried Glenn and Abraham at Hilltop. Jesus was remorseful for their loss and happy to oblige, but Hilltop’s leader, Gregory, wanted nothing to do with it. From a sensible standpoint, Gregory’s position was hard to argue. If The Saviors spot them here, Hilltop was going to have to dig a lot more graves. 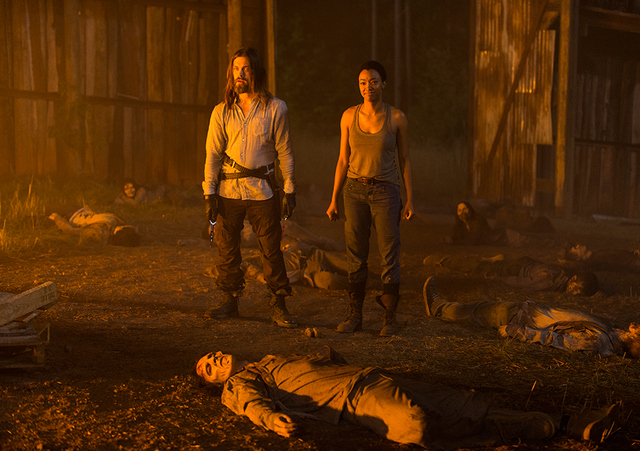 Xander Berkeley plays the prickly bureaucrat effortlessly and he made for a terrific foil for Maggie and Sasha. Gregory pocketing Glenn’s watch was a perfect example of his opportunistic attitude, which made Maggie slugging him all the more rewarding.

For all his gruff, Gregory really isn’t all that keen on leading Hilltop. He’s just in the position due to Jesus constantly getting wanderlust and going on ninja adventures. But now, the leader Hilltop deserved all along has finally arrived. This is a nice payoff to Maggie’s original stint in a leadership position in Alexandria.

And Maggie’s slow burn ascension to leading Hilltop couldn’t come sooner. The Saviors made a powerful statement unloading walkers through the Hilltop gates. Maggie and Sasha rolled out their platform for their campaign literally as Maggie smashed the Saviors’ car with a tractor. Watching Sasha and Jesus team up to stab and jump kick walkers was fun, but man are the rest of the Hilltop sound sleepers! It was very weird that only two other residents and Gregory reacted to the carnage. If nothing else, the car’s radio should have been a wake up call for everyone.

Despite Gregory’ cautious approach and kowtowing to Negan’s No. 2, Simon, the Saviors were back on their bullying kick pillaging Hilltop for half its resources. This wasn’t nearly as emotionally draining as last week’s raid and had a lot less impact thanks to the limited scope — we only got to see Gregory and Jesus react. 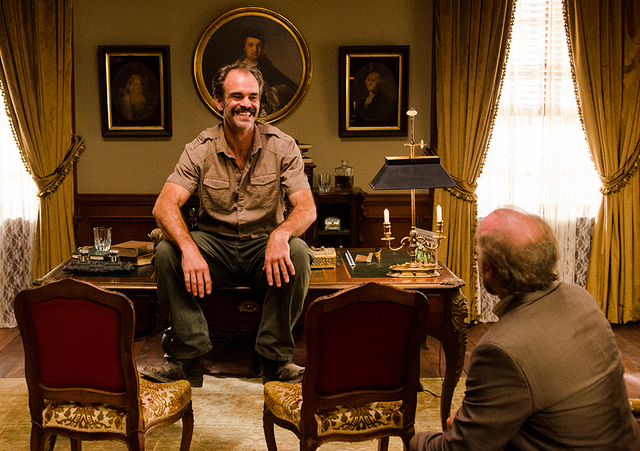 Following the raid, Sasha is already considering a new plan sending Jesus to find out Negan’s home base. That’s valuable information that could come in handy for more than just Hilltop.

Eventually, Rick will see the benefit of going after Negan with some new friends. For now, he’s still content to play ball even if Michonne and Carl hate that particular game plan. The Carl/Enid subplot started off feeling very detached from the Hilltop events, but it came together nicely. Carl is starting to mature as a character. While he could pal around with Enid and have fun skating around, taking out Negan is a far greater priority. He’s got no chance, but this is the kind of disastrous proactive approach that should finally snap Rick out of his defeatist mindset. 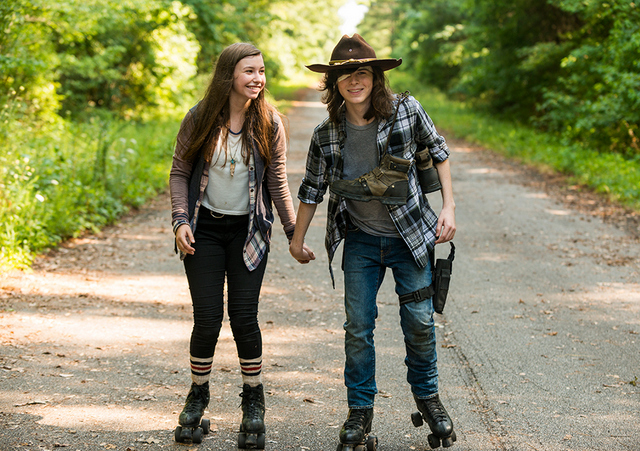 Enid has gone beyond Just Surviving Somehow and ready to embrace life again at Hilltop with Maggie and Sasha. Go-Getters positioned Carl and Enid on two very different paths. Hitching a ride in The Saviors’ van with Jesus might be a different kind of road to Damascus for Carl, but being happy is never a winning strategy on the show especially for a third-tier character like Enid.

Go-Getters finally showed how Maggie and Sasha were coping while taking the significant step in paving the way for the three communities to rally against The Saviors.

Check out all of the previous Walking Dead recaps in the Episode Guide.