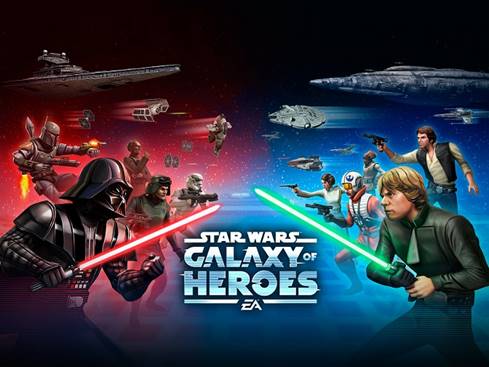 I’ve been playing Star Wars Galaxy of Heroes for a while now so I was excited to see the mobile game is getting a major expansion. While the combat had been relegated to iconic characters from Star Wars, Galaxy of Heroes is now adding some of the most famous ships from the saga. Dibs on the Millennium Falcon!

Players will be able to take part in space combat and collect the various ships as well as X-Wings and TIE Fighters. The game remains free and is available on the App Store and Google Play. Galaxy of Heroes is a nice fun distraction and time killer, which should come in handy for those traveling for Thanksgiving or stuck in long lines on Black Friday.

With the update players will be able to:

Naturally, Galaxy of Heroes is getting in on the Rogue One action so players will soon be able to add characters like Jyn Erso, Cassian Andor, and K-2SO starting in December. There will be special Squad Tournament events so players have more opportunities for Rogue One: A Star Wars Story character shards and special rewards.