Outlaw Country was a strange episode of Legends. It basically put the team in yet another trope-filled Western escapade that attempted to make up what it lacked in originality with over the top fun. While that effort largely worked, Legends is going to need to find new ground to prevent the series from becoming too formulaic too soon.

Jonah Hex (Johnathon Schaech) marks the first hero guest star to return for another episode. There wasn’t a lot different from his first appearance beyond an initial reluctance to accept Sara as the team leader. The writers have gotten into this bad habit of feeling the need of validating Sara as the leader on a weekly basis. Maybe it’s because they don’t buy her as the team’s best leader either?

Caity Lotz is still playing Sara as overly brooding and distant from the rest of the team. Rip wasn’t the best leader either as he was too stuffy and secretive. The Legends team needs a leader charismatic enough to take point on missions, be engaging enough on the down time scenes and be a lot more fun in the process. I still think the show missed the mark with Ray by casting him as the redundant science geek instead of the more traditional hero.

Hex doesn’t exactly make for the best recurring guest star. Outlaw Country just offered the writers a chance to tackle every other Western cliche they missed in The Magnificent Eight. And returning to the 1870s was hardly worth it just to see Nate and Amaya’s reactions to playing cowboys. Hopefully the next time Hex shows up, it’ll be set during his stint in the future. 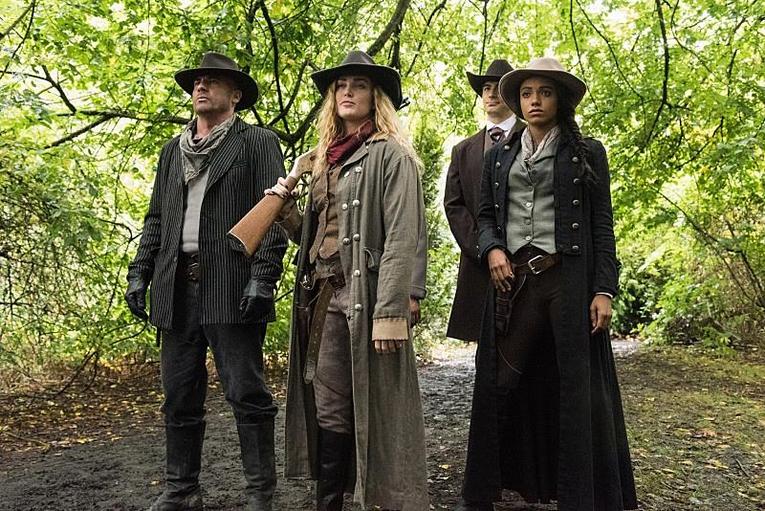 At least it gave a solid spotlight to Jeff Fahey as the White Dwarf matter stealing scene-chewing villain of the week. Fahey is the kind of fun character actor that probably would have been better served as a recurring adversary.

Beyond learning there’s a substance that can actually hurt Nate while he’s Steel-ed up, it was great to see Nate working up an actual costume. While the Invasion teaser stole its debut thunder I’m glad Nate can be Steel instead of Colossus Jr.

The episode’s other intriguing future subplot was Stein having visions of another woman. His poor wife can’t catch a break, but it makes sense for Stein to start suffering some side effects from all their time traveling.

It was hard not to be stoked for the ending as it played out just like the setup for a comic book crossover. Hopefully, the Legends’ involvement will make sense of why the team is called back to 2016 besides we wanted everyone involved.