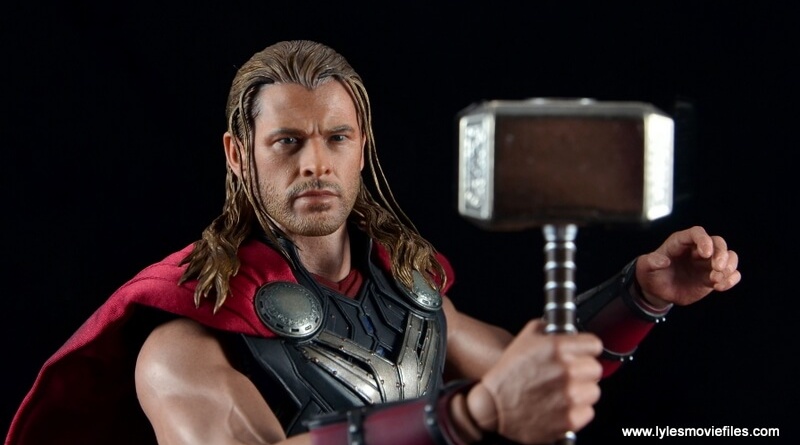 I won’t even fess up to how many times I’ve seen Captain America: Civil War. The one thing it was missing though was the big man from Asgard. Good thing I still had my Hot Toys Avengers: Age of Ultron Thor figure to review. And in this case, this was a figure worth the wait.

Package:  While overall I find the Age of Ultron packaging to be a little dull, Thor’s is pretty cool. Maybe it’s just that the red and grey color scheme work for him. It doesn’t hurt that the A is positioned right along where Thor’s cape is lined up. 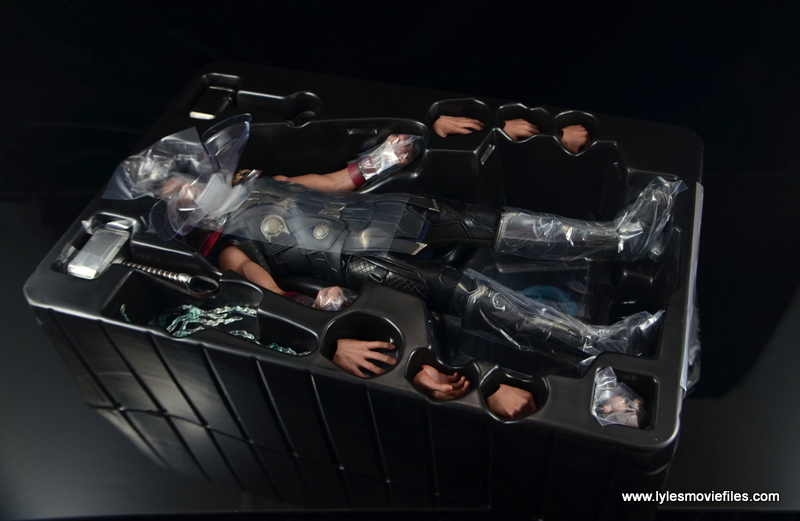 As usual, Thor is protected with the face guard overlay, plastic wraps and foam pads. That’s to help prevent any in transit paint rubs. A nice gesture, but one that makes me a bit worried when I have to start clipping away especially around the fists and boots. 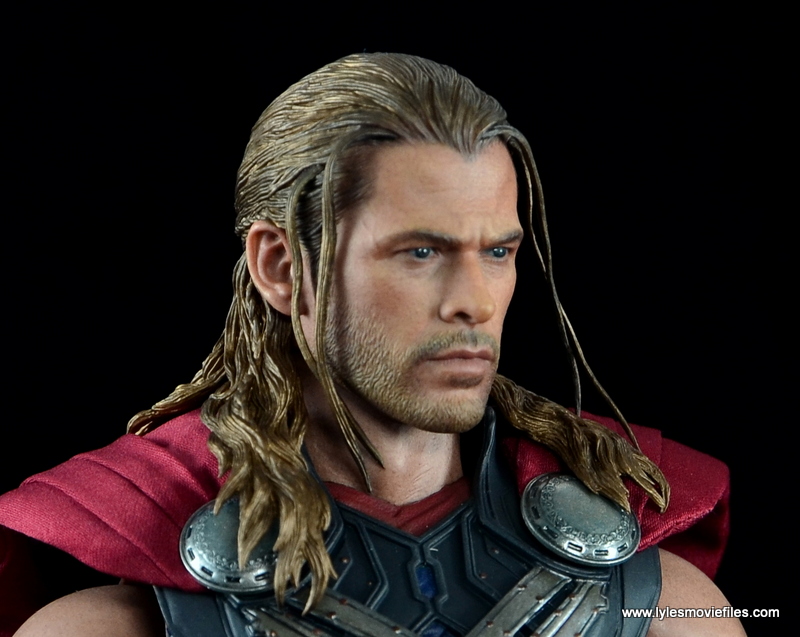 Likeness:  The Avengers’ Thor sported a reasonably good likeness of Chris Hemsworth. The open mouthed expression was an odd choice, but overall it was solid. Compared to the Age of Ultron Thor though it’s not even close. In pretty much every respect, this looks like a 12-inch version of Chris Hemsworth. 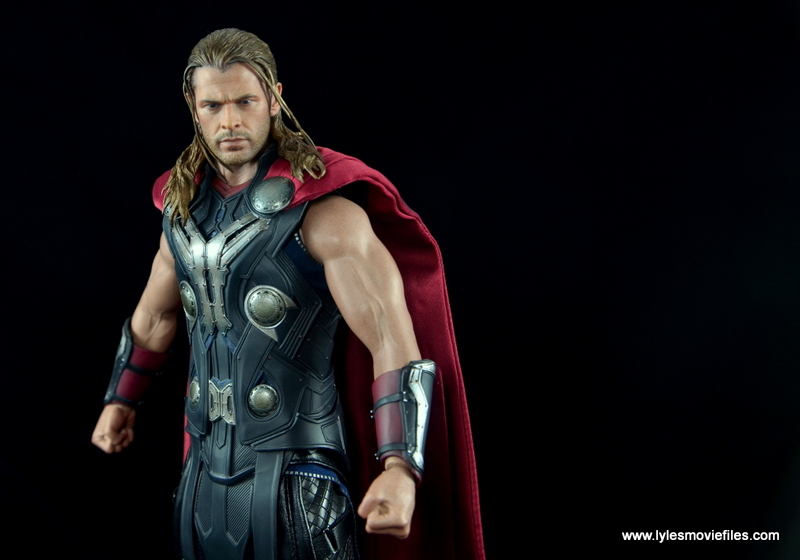 The stern expression makes him look ready to throttle Stark and smash a squadron of Ultron drones. I really love how the hair was sculpted right down to the four slightly raised pieces. That helps give the hair more of a realistic look since it’s not all matted together. Combine that with some exquisitely done stubble and this headsculpt is right up there with some of Hot Toys’ best work. 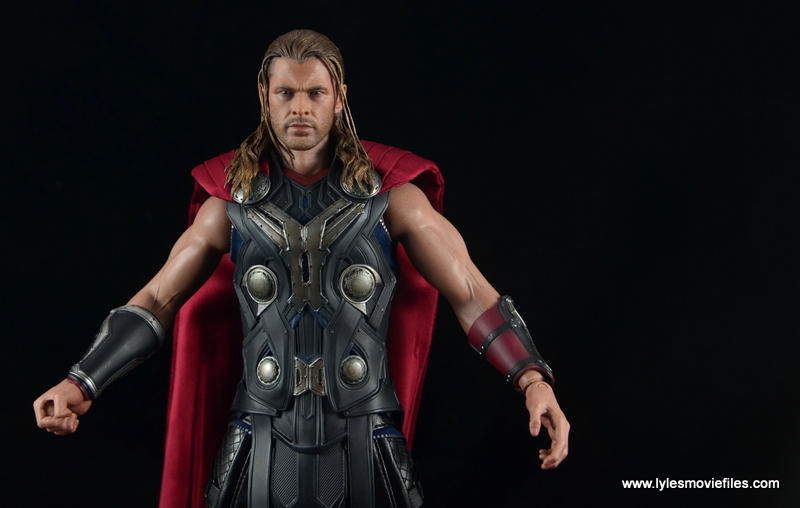 One of the deciding factors for me in getting the Age of Ultron Thor was the distinct change in costume — namely the more classic comic bare arms look. Hot Toys gave Thor the same bare skin treatment they used for Hulk. It’s durable enough, but I’m pretty leery about getting too forceful in posing him. Out of the package, the shoulders tend to slouch down somewhat. It gives Thor a weird gap look. You’ll need to lift the shoulders up to the socket to get a nice snug fit. 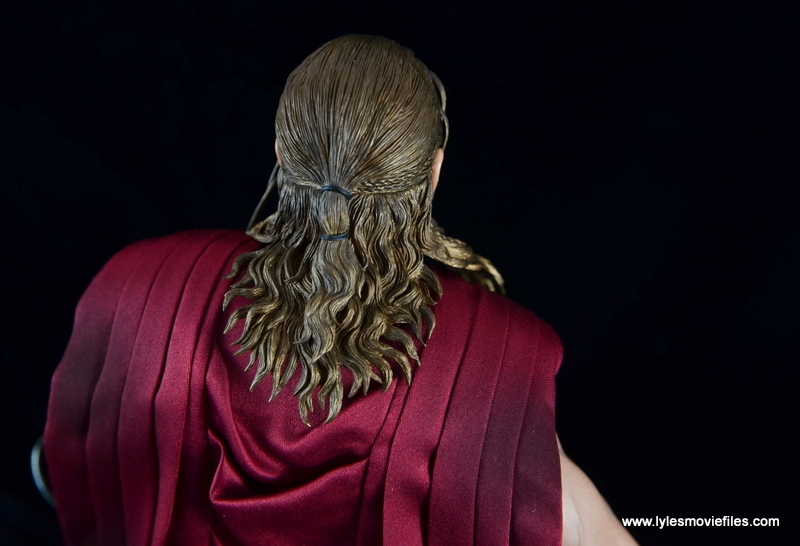 Paint:  Thor has a bit more paint than the normal Hot Toys figure. The skin tone match is perfect. There’s some subtle shading around the veins to further help the musculature stand out. Hot Toys hasn’t quite perfected a blonde hair color yet. They’re still using a darker gold shade. As far as complaints go that’s about all I’ve got. 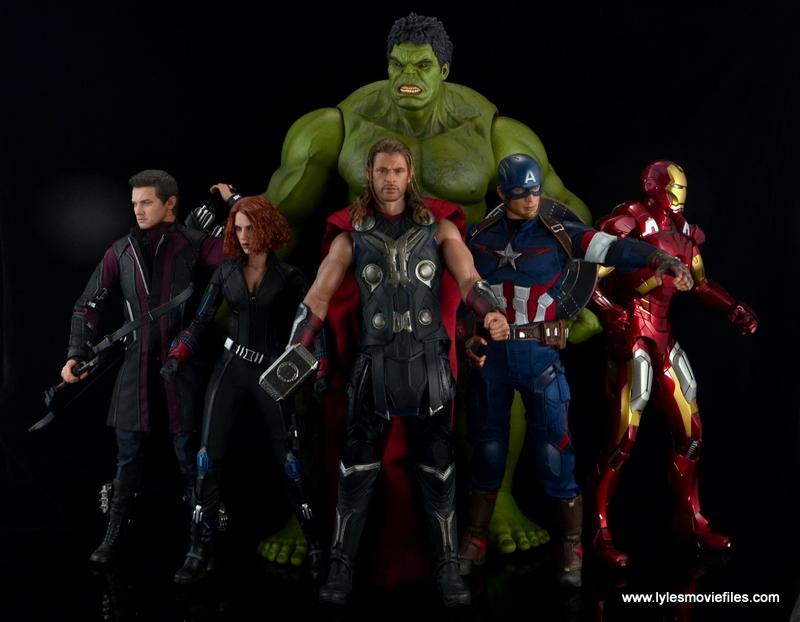 Scale:  Thor clearly stands much taller than his fellow Avengers. You won’t notice a huge discrepancy between Thor and say Captain America, but there’s a noticeable difference with the smaller Hawkeye and Black Widow.

Outfit: Most of this outfit is the same as the Thor the Dark World attire. The biggest difference is the slight changes in the overall darker colors and swapping out gold for silver. It’s a very intricate attire. The detailing on the vest piece is really impressive.

I really like how Hot Toys handles the cape as it’s flared up enough to not hinder articulation yet remain true to the comic/movie appearance. 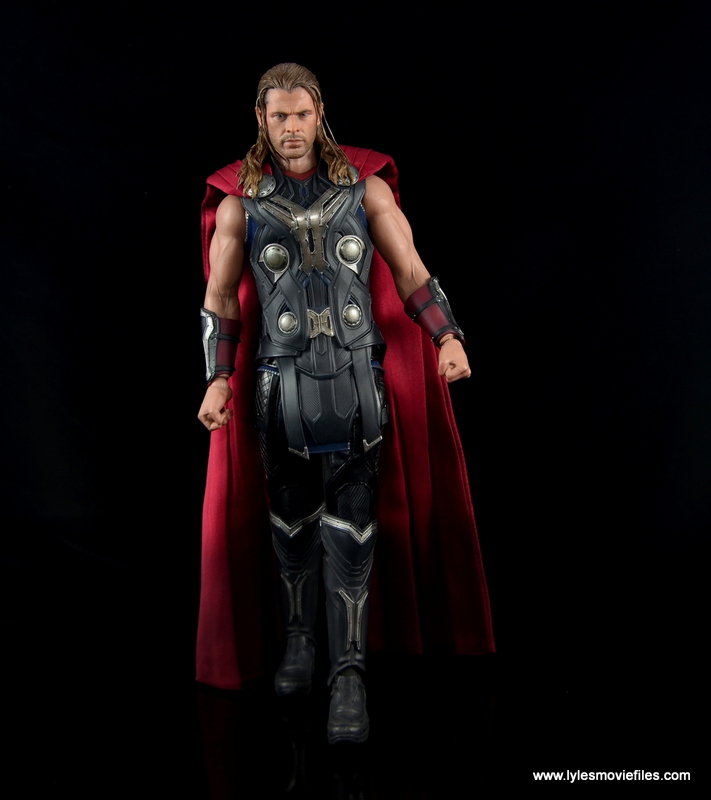 Articulation:  That intricate outfit does come at the cost of some articulation. You’re not going to get a lot of movement with the torso. 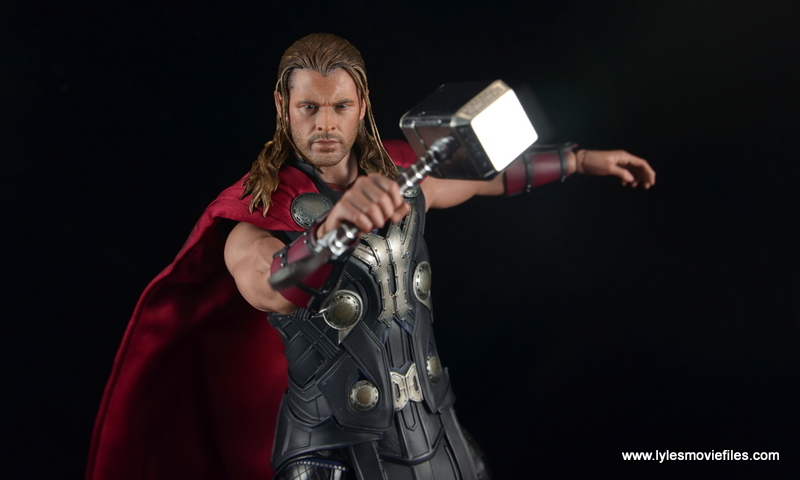 Thor’s arms have more range than I’d expect. I was leery of moving them too hard, but they seem fully able to handle most reasonable poses. The legs are where you’ll have more fun posing him. The left ankle on mine was a little loose, which made him topple over more times than I’d like. 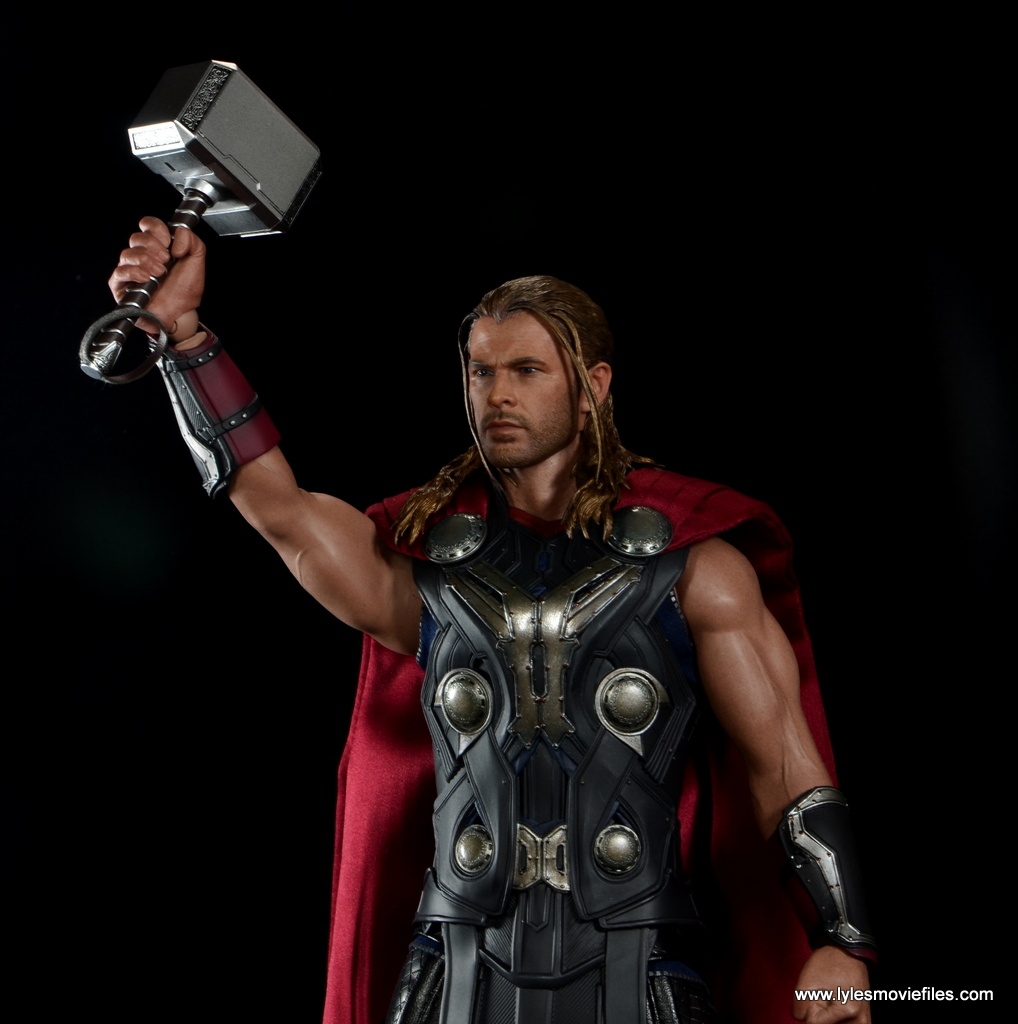 Mjolnir is a weighty accessory so Thor won’t be able to keep it in a raised position for long. Fortunately there’s a better option available in that regard.

Accessories:  Thor gets a very generous assortment of accessories. I definitely felt like Hot Toys covered all the appropriate 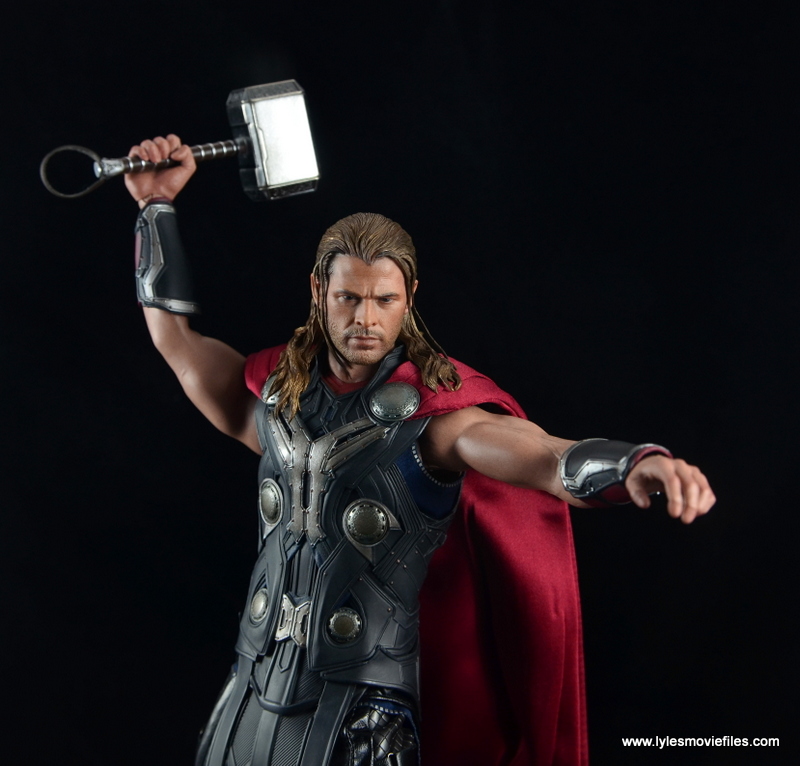 I really appreciated getting two versions of Mjolnir. The LED version gives a nice strong light and is much lighter than the metal version. Combined with the weak ankle, the metal version could potentially cause some major damage if he topples over. The lightning effect is a small thing, but it adds such a welcome dynamic element to posing options.

I wish Hot Toys gave the Age of Ultron Thor the same larger stand as the Dark World version. That would allow for some great flying poses. 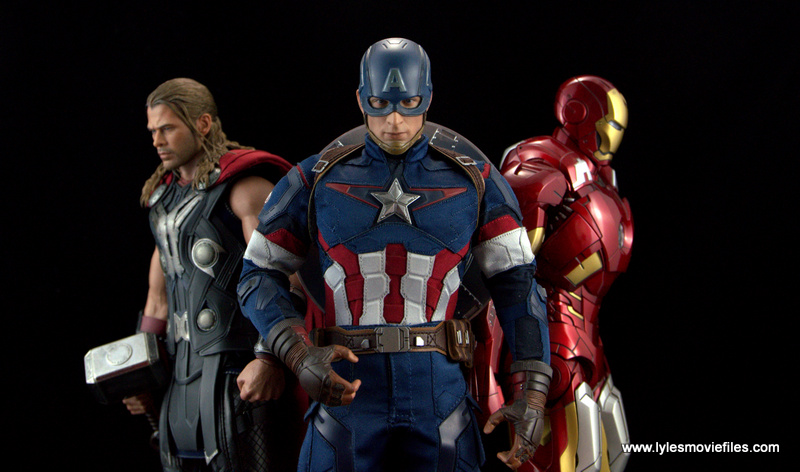 The AR feature is a cool idea in theory, but it’s not nearly as cool as I’d like. It’s the kind of neat gimmick that’s fun to do once, but not something I’d break out again.

Worth it?  I paid $220 for Thor. That seems a fair price for Thor considering the great likeness and useful accessories. 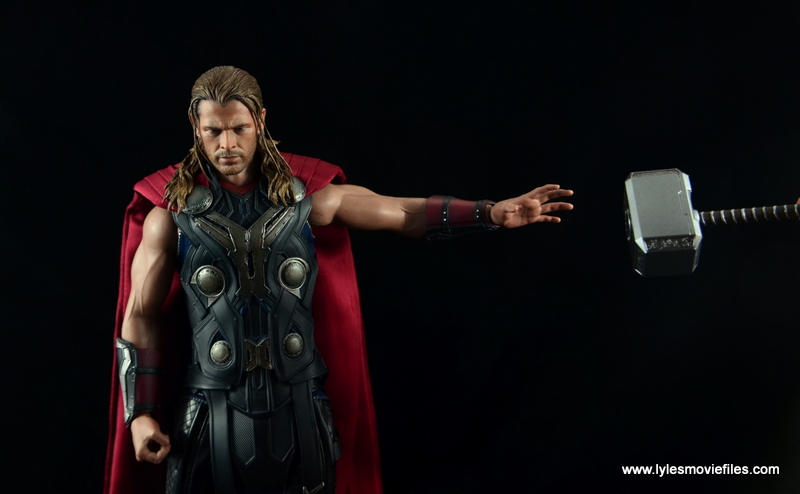 Where to get it?  Sideshow Collectibles is sold out of Thor. But Big Bad Toy Store still has him in stock. With Thor: Raganarok coming it might be a good idea to snag the Age of Ultron Thor now.