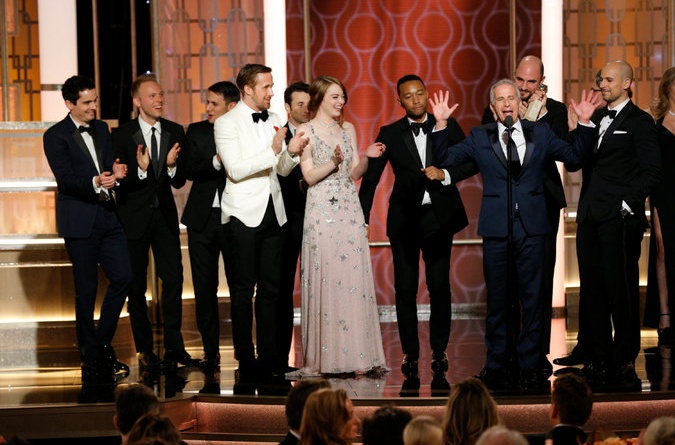 The Golden Globes 2017 are history. Maybe the stars are just finally starting to recover from their hangovers and congratulating each other for being awesome. As usual, the Globes provided some interesting insight as the award season really gets into high gear. Here’s some of the biggest lessons from the Golden Globes 2017:

I get it. La La Land was my top film last year so I was fully on board with all the love. While I fully expect La La Land to dominate the Oscars, I anticipate more of the wealth being spread.

Stone even gave one of the night’s best acceptance speech leading off by thanking her family instead of her agents and producers.

Natalie Portman’s second Oscar might not be a lock

Just like Casey Affleck was a comfortable bet the mortgage choice for Best Actor for Manchester by the Sea, Portman’s portrayal in Jackie seemed the clear odds-on favorite. Isabelle Huppert seemed legitimately stunned that her performance in Elle earned her the Best Actress – Drama award. Portman still seems like the safe bet, but now there’s potentially a chance for an upset.

Aaron Taylor Johnson was truly mesmerizing in Nocturnal Animals. He definitely warranted a Best Supporting Actor nomination, but not at the expense of his co-star Michael Shannon. So it was a pretty big stunner when he beat out Jeff Bridges (Hell or High Water) and Mahershala Ali (Moonlight), who seemed to be 1A and 1B in the Oscar race.

And it seemed weird that American Crime Story was still racking up wins. In most cases, the Golden Globes seemed to be more timely with its award selections with newer series getting nominations and wins. This felt like a throwback to so many award shows from 2016 with Sarah Paulson and Ryan Murphy basking in the moment.

The writers needed to rearrange some gags

Every award show, Vergara rocks some dazzling and scintillating outfit. This year, the Quantico star was easily one of the show’s stunners in this fittingly gold dress. Looks like Vergara is going to have a fashion rival over the next few years.

With wins over established shows like Game of Thrones and new darlings This Is Us, Stranger Things and Westworld, The Crown — about the life of Queen Elizabeth — will likely have a few folks tuning in to Netflix to learn more. The Crown nabbed Best TV Series -Drama and Best Actress in a TV Series – Drama (Claire Foy).

For anyone who didn’t understand why her peers hold her in such high esteem, tonight was perhaps the best reason why she’s legit Hollywood royalty. Touching on a variety of topics from the Twitter-in-Chief,  journalists’ responsibility and Hollywood’s responsibility. But maybe the most impressive was how Streep used her spotlight moment as the winner of the Cecil B. DeMille Award to put the showcase on the eclectic, diverse talent in the room. It was crazy how Streep was able to rattle off the hometowns of her peers like Viola Davis, Ruth Negga, Amy Adams and more.

It was a welcome sign of not just token nominations, but truly recognizing some of the finest work in TV and films today. Hopefully, we’ll see more of the same come the Oscars.