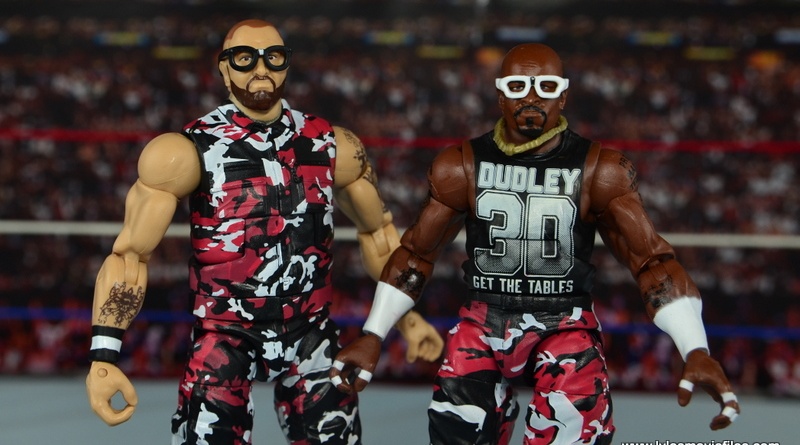 When I think of ECW, it doesn’t take long for me to conjure up images of Bubba and D-Von crashing clowns through tables. Besides toning down their language — and dropping Brother Gertner and Sign Guy Dudley — The Dudley Boyz were largely able to maintain their aura when they arrived in WWE. Along with Edge & Christian and The Hardy Boyz, the Dudleys were responsible for some of the most iconic moments of The Attitude Era.

Naturally, when Mattel revealed The Dudleys were going to be in Elite Series 45, I was pulling for Attitude Era versions. Instead, Mattel went ‘heel’ and opted for their current versions. And since the figure production cycle takes about a year, the Dudley Boyz have already wrapped their latest WWE run making the Flashback versions seem like a much smarter choice in hindsight. But I’m a sucker and bought the Elite figures anyway because you never know how these licenses and which wrestlers get blackballed will turn out with Mattel.

Packaging:  This is the same packaging as we’ve gotten from the 2016 Elite line. It’s a little heavy on red for me, which I didn’t find less appealing until I started seeing the color schemes for some of the alternate packaging. The bios are pretty decent here and carry the important information.

I’ve gotten spoiled though with the other lines since they actually pack information about the character. The ideal package back has these stats along with a basic write-up about the wrestler. 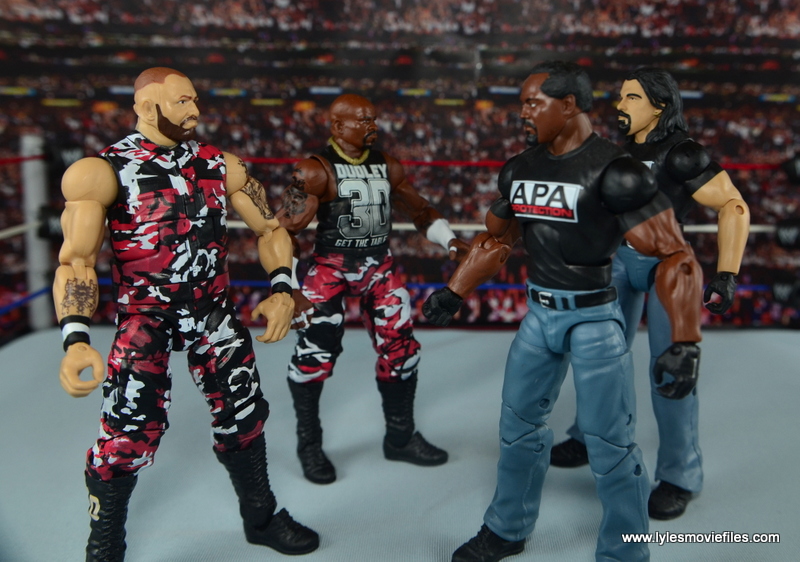 Likeness:  The interesting thing about The Dudley Boyz is with the exception of a tattoo here and less hair there, they pretty much look how they did in the Attitude Era. That’s good news for folks like me willing to fudge them into their Flashback collection. 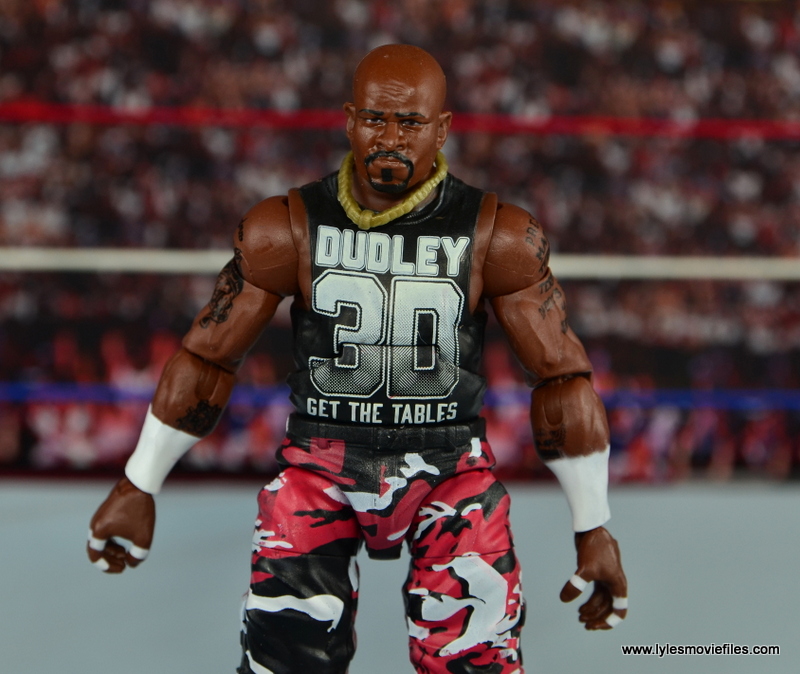 Of the two, D-Von has a slightly better likeness with the sterner, intense expression. This is another you can add to the best likeness ever category. Mattel nailed this one and it looks amazing.

Bubba Ray has a bit of a pinhead and his sculpt is more reserved than I’d like for the man formerly known as Bully Ray. Jakks made a terrific Bubba Ray head sculpt and I’m hoping that head will be an easy enough swap. 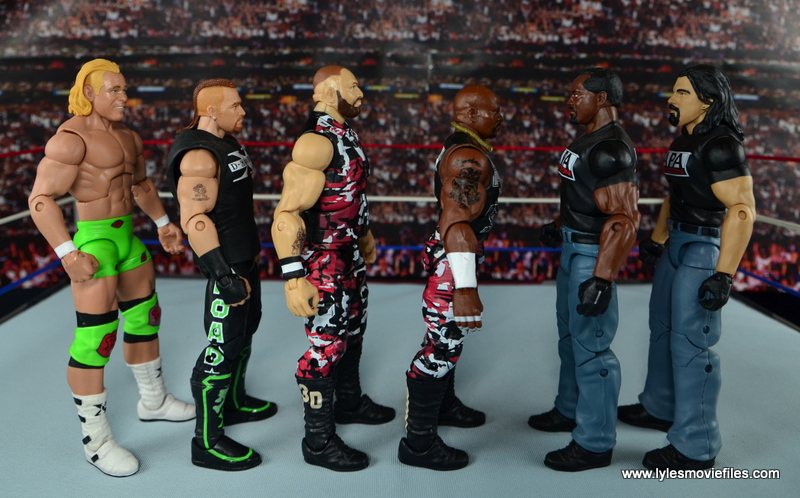 Scale:  D-Von clocks in at 6’2″ while Bubba Ray is 6’3″. D-Von is slightly smaller than he should be as the size difference between the two shouldn’t be this pronounced.

Paint:  The tampo on the shirts are really well done. It’s the camouflage that’s the paint weak spot. White just won’t cooperate with red and black well leading to some occasional bleeding through. That’s almost expected at this point though.

D-Von’s heavily taped wrists and fingers are done pretty accurately and neither had any major sloppiness anywhere else.

I was very impressed with the work on the Dudleyz’s tattoos. They’re all very intricate with some real attention to getting all the details correct. 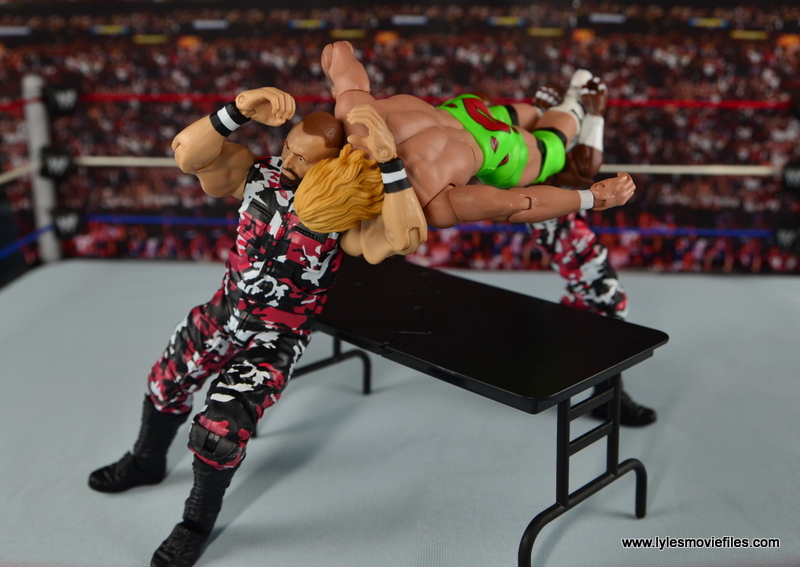 Articulation:  D-Von has those funky new elbows Mattel has been experimenting with and it’s not an improvement. The ‘Hasbrow’ style elbows don’t have the same range as the normal mold, but they’re functional enough for D-Von. 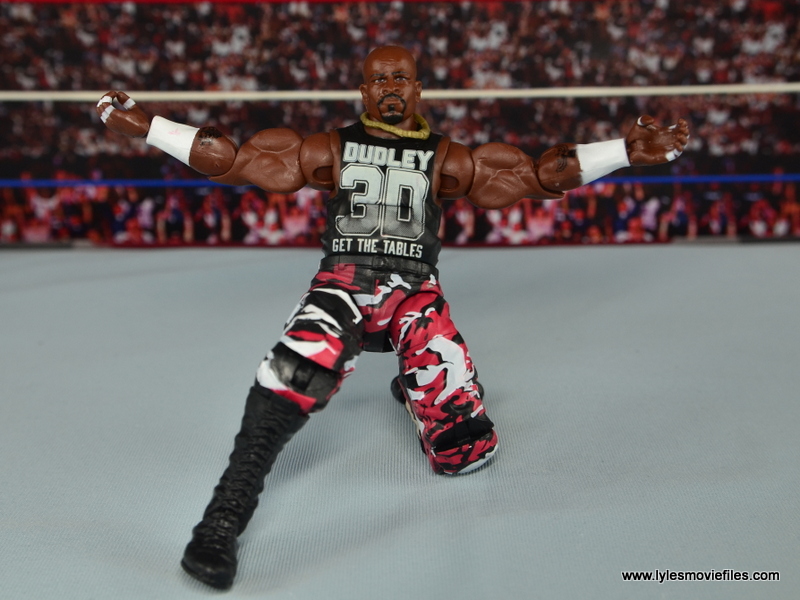 That issue aside, this is the consistent Elite articulation that’s almost perfect. Double jointed elbows would really help with some poses. For brawlers like The Dudley Boyz, that’s not the biggest problem, but the articulation scheme is thisclose to being perfect.

The Dudley Boyz have: 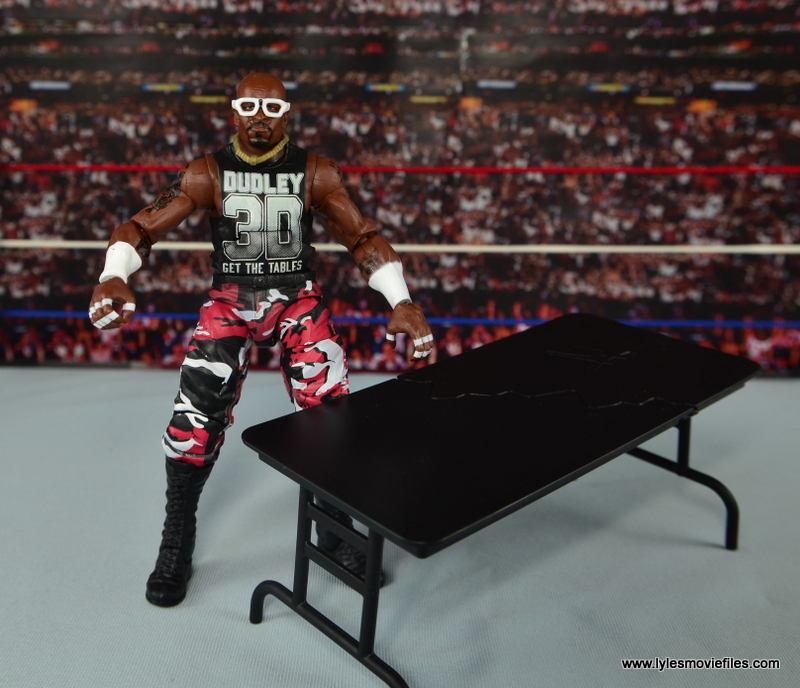 Accessories:  Mattel could make questionable accessory choices with 90 percent of the line, but every so often there’s no-brainer decisions. Jake ‘The Snake’ has Damien; Hacksaw Jim Duggan has his 2×4 and The Dudley Boyz have their tables.

I feel like I would have noticed this earlier, but my D-Von’s table legs aren’t matched up properly. There appears to be a spot for tips that plug into the legs to make them match the height of the other leg. That’s a very weird design flaw either way. Good thing I’m not at a shortage for wrestling figure tables. 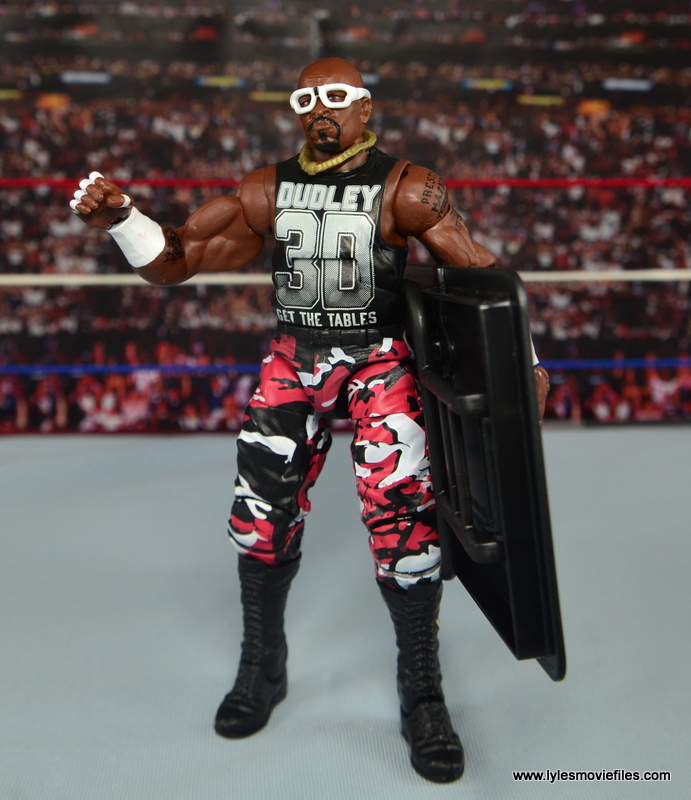 Additionally, Bubba Ray and D-Von get two pairs of their trademark glasses – one black and one white set. That allows for some nice mix and matching between the two. It’s rare for Mattel glasses to fit particularly well on figures without dedicated holes in the head, but these fit great. D-Von also comes with a gold chain that comes on and off easily enough. 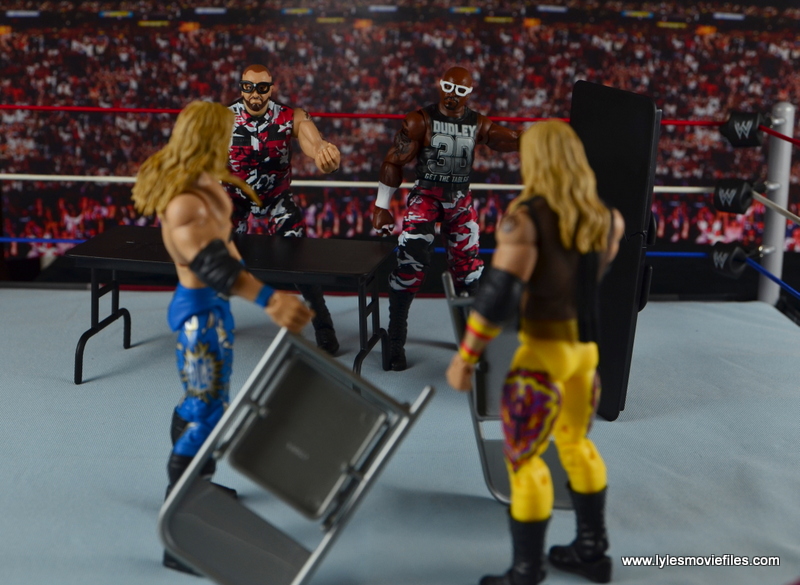 Worth it?  Amazon had a killer deal going right now for both Bubba Ray and D-Von. I was able to get both Dudley Boyz for $25. That’s $5 more than the regular cost of an Elite figure. The price has fluctuated enough over the month so be on the lookout. Even at the normal price, these were two solid figures.

D-Von is a tad short and Bubba Ray needs a larger head. Beyond my lack of interest in current day versions, these figures turned out exceptionally well. 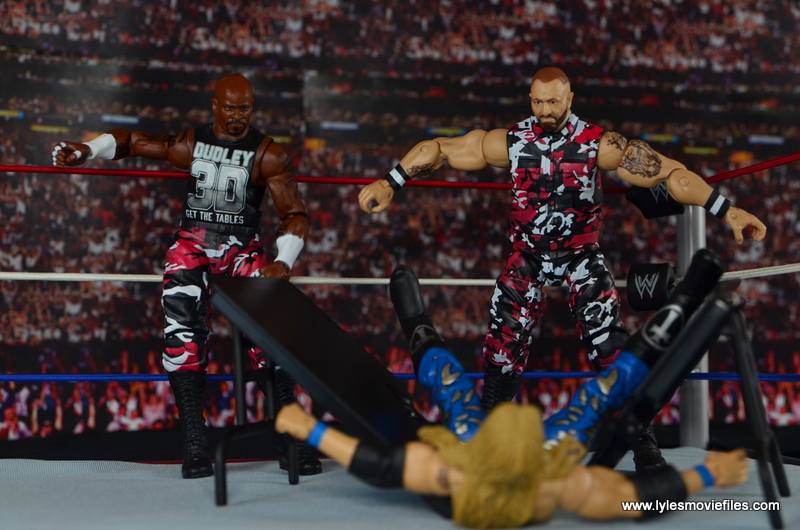 Where to get it?  Toys R Us has had Elite 45 in stock for a while now. Target is just now starting to get the wave as part of its winter restock. Also, Amazon is another great option as they’re currently in stock.