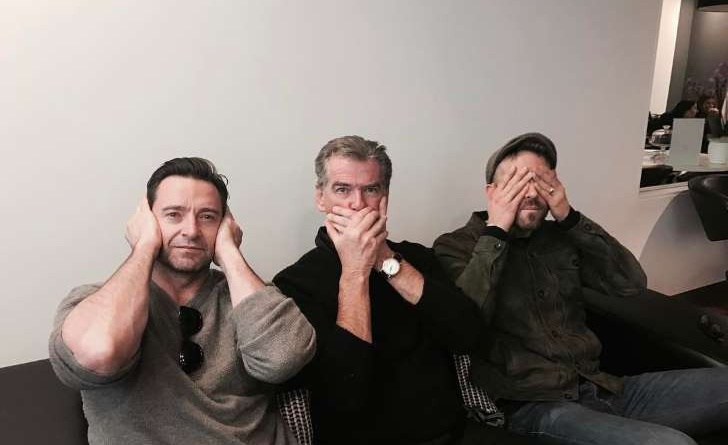 Maybe it’s just a tease or a happy coincidence that three big action stars are together at the same time. But hopefully that pic of Hugh Jackman, Pierce Brosnan and Ryan Reynolds signals a future Marvel collaboration? Like say…Brosnan as Cable for Deadpool 2?

The trip shared a couple of pictures on social media. Not surprisingly, fans were ecstatic about the possibility of the former 007 joining forces with Wolverine and Deadpool. Jackman has repeatedly tried to shoot down rumors that he’ll be dropping by for a Wolverine cameo in Deadpool 2.

This pic will do absolutely nothing to quiet them down now. May as well keep the fanbase hyped. Deadpool 2 isn’t slated until 2018 and with Black Panther and Avengers: Infinity War coming out, 20th Century Fox would be wise to keep the film at the forefront of movie fans’ minds.

Brosnan (The November Man) will always be my sentimental favorite James Bond. While he’s hardly the hulking mass of man that Cable is frequently portrayed in the comics, I’m happy to let that slide if Brosnan indeed signs on. What he lacks in size, Brosnan more than makes up in charisma.

And more than the size, Cable needs to have a sense of world-weariness like a fighter hardened and jaded from fighting countless wars. Brosnan can pull that off easily and with the kind of swagger that’s made Cable so popular among comic fans.

What do you think? Hoping Brosnan actually is part of Deadpool 2? And if he’s not going to play Cable, which X-Men character would you like to see him play?