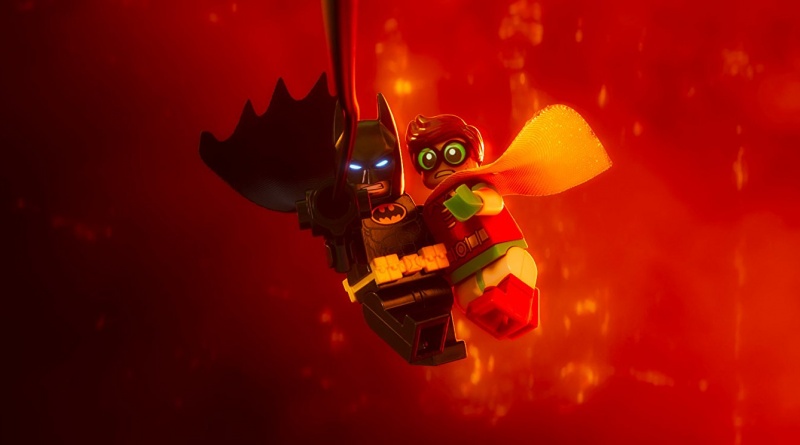 While not as accessible for general audiences as The LEGO Movie, The LEGO Batman Movie is a fan-pleasing effort that showcases everything that’s awesome about The Dark Knight.

Batman (voiced by Will Arnett) is still in his hilariously narcissistic world convinced he doesn’t need anyone to be the most amazing hero around.  Despite Alfred’s (Ralph Fiennes) best efforts and his new ward Dick Grayson (enthusiastically voiced over the top by Michael Cera), Batman is still 100% focused on Batman.

But when a new commissioner comes up with a plan for a partnership and the bad guys suspiciously decide to reform, Batman slowly learns maybe his worst enemy is himself.

It’s clear that the five credited screenwriters have a deep love for all things Batman. They have an obvious affection and clear appreciation to the Batman mythos.

They’re even able to spoof some of the various portrayals of Batman as the ultimate hero and brooding loner. The script is a very funny, but sharp commentary on Batman as a character who everyone takes far too seriously these days.

Ironically, the film’s biggest strength is also its weakness as the writers focus a little too much time on Batman. As both the hero and somewhat villain of the film, Batman has the most significant role, but it comes at the detriment to screen time for Batman’s acclaimed Rogue’s Gallery. In fairness, the script provides moments for even the D-list villains like Condiment King, Calendar Man and Kite-Man (heck yeah!), but other Warner Bros. bad guys receive more screen time. And over the course of the film, Batman’s shtick starts to get somewhat overdone. Good thing Robin proves such an entertaining scene-stealing sidekick.

For the longtime DC fan, there’s a ton of Easter Eggs from comic book cover homages, costumes, cameos and even an El Dorado sighting.

Zach Galifianakis seemed like a smart choice to voice The Joker, but his performance is surprisingly subdued and lacking the maniacal energy associated with Batman’s arch-enemy. Jenny Slate (Gifted) is a better fit as Harley Quinn, though her role is curiously limited.

The film also features commendable efforts to be diverse with Hector Elizondo cast as Commissioner Gordon and Rosario Dawson cast as Barbara Gordon/Batgirl.

But my favorite was the nod to the Tim Burton Batman series with the casting of Billy Dee Williams as Two-Face. Williams was cast as Harvey Dent in Burton’s Batman and presumably was set to play his villainous alter-ego in Burton’s third film, which never materialized. From Mariah Carey as Mayor McCaskill to Channing Tatum as Superman or Conan O’Brien as The Riddler, LEGO Batman has a slew of stunt casting, but none were as much fun for me especially since Williams won’t be reprising his role as Lando Calrissian in Star Wars: The Last Jedi.

Like the LEGO Movie, LEGO Batman is overflowing with creativity and an anything is possible charm. Director Chris McKay knows how to keep a sense of unpredictability going and this franchise is one of the few where the sillier, the better.

The LEGO Batman Movie delivers exactly what was promised — the charm and imagination of The LEGO Movie focused on Batman’s universe with something for every Batman generation.