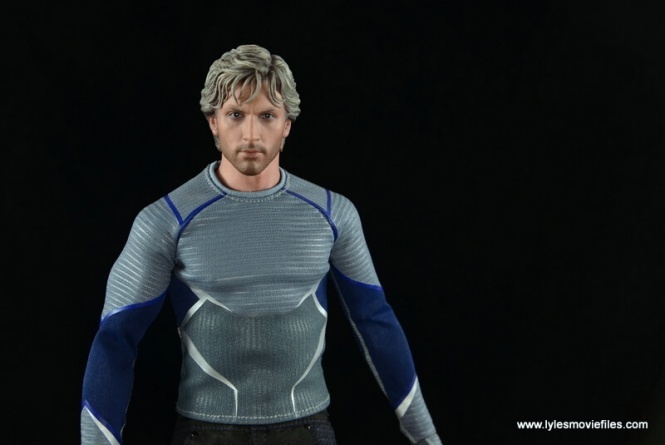 Quicksilver got a bad break in Avengers: Age of Ultron. Apart from playing the Hawkeye role as unwitting villain pawn with an uninspired costume he actually got gunned down. No self-respecting speedster — even The Whizzer — gets taken down in that fashion.

Despite his quick stint in the Marvel Cinematic Universe, Hot Toys came through with what’s likely to be our only Quicksilver figure There was a ton of potential with Aaron Taylor Johnson’s portrayal of Pietro Maixmoff aka Quicksilver. For those like me who wonder what could have been Hot Toys released an AOU Quicksilver figure to take a more permanent place in your Avengers display.

Package:  This stays in line with the Age of Ultron packaging. A promo picture of Quicksilver in action with variations of the base colors. In this instance it’s blue-green in a better nod to the comic costumes than the film version. I appreciate Hot Toys mixing up the boxes for the various Avengers. They’ll make  terrific display pieces lined up together for folks with the space.

Quicksilver is neatly arranged in the familiar black tray and his accessories lined around him. It’s the usual story as far as gently removing the plastic wrap around the arms and boots. Just be careful if you need to break out the scissors so you don’t accidentally cut into the costume. 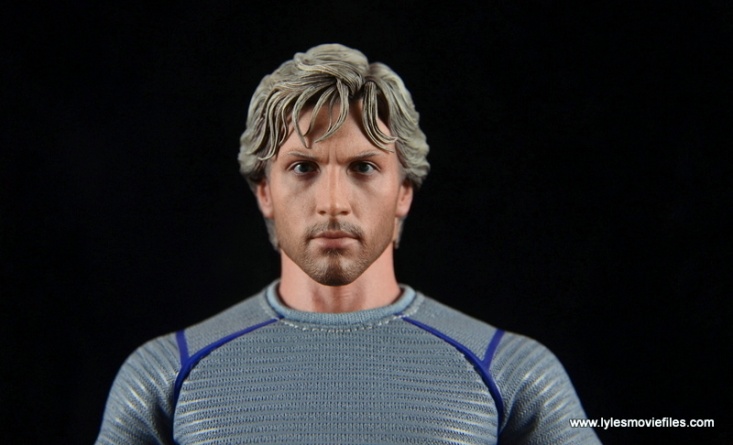 Likeness:  Aaron Taylor Johnson is pretty easy to spot in this sculpt. The expression is great. It reflects Quicksilver’s constant impatience with those around him. That’s something else I wish Whedon had done better in terms of capturing Pietro’s personality. Hot Toys’ typical tremendous attention to detail is showcased in area like the faint stubble and hair strands.

Paint:  One thing you can always count on with Hot Toys is not worrying about stray eyes or badly slopped together paint jobs on the head sculpts. Of course you pay for that quality, but I like having confidence that I’m not going to have issues with the paint work on the face. 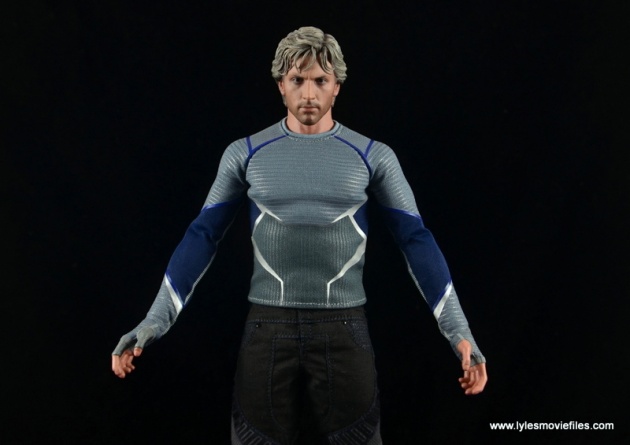 Quicksilver’s hair was toned down from shocking white in the comics. The movie version had an odd two-tone deal that made it look like Quicksilver forgot to touch up his roots. Hot Toys went with a nice blend that seems more of what Pietro’s hairstyle would look like in real life.

The goatee was also toned down to make it look more subtle. Honestly, I like how Hot Toys handled Quicksilver’s hair on the figure more than the source material. 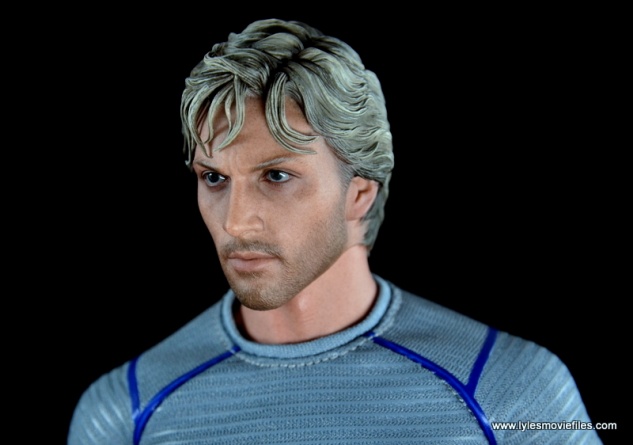 Outfit: Joss Whedon said he’d shot scenes with Quicksilver surviving and even had a new uniform in the New Avengers finale scene. Beyond my aversion to killing characters off to be more realistic and keep the stakes high, I would have loved to have seen Quicksilver’s costume. 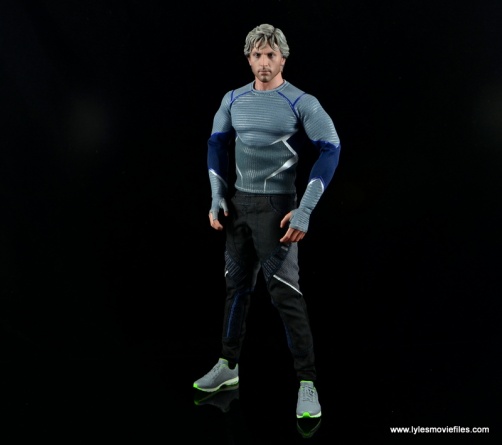 That’s mainly because his final battle attire is a little boring. There’s some silver accent points but that’s about as exciting as it gets in breaking up the light blue T-shirt and black pants combo.  Quicksilver’s shirt has a nice texture and the pants are fine although this won’t be the figure you’re showing off Hot Toys’ amazing quality of work on uniforms.

The light grey and green sneakers look almost exactly like a pair I own and are wonderfully real world accurate. 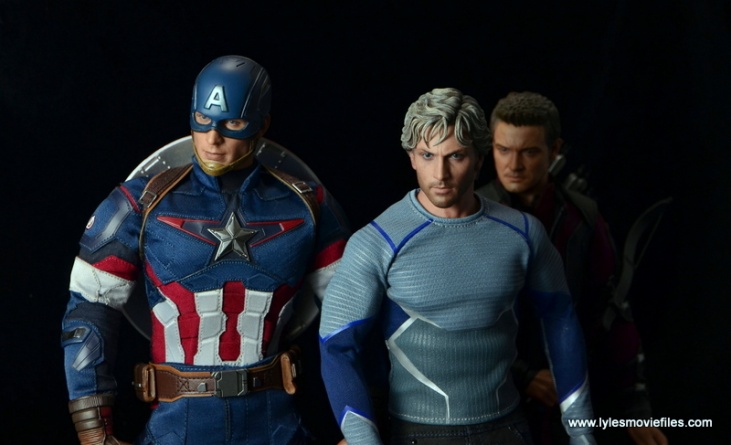 Scale:  Quicksilver uses the smaller of the male bodies so he’s the same height as Hawkeye and shorter and slighter than Captain America. That’s about right from the movie. I appreciate having some size differences with my Hot Toys figures.

Articulation:  Easily the best part of the outfit is it doesn’t restrict any movement. Quicksilver can hit any standard running pose fairly naturally. He’s probably the one figure I wish had better up and down range on the neck to better get those ready, set, go poses.

The biggest problem Quicksilver has comes as a result of his outfit. Without the big sturdy boots found on most figures, a lot of standing integrity is placed on the ankles and they don’t hold up. Be mindful of how you pose Quicksilver on display as he could be a repeat offender in terms of sparking a round of display dominoes. 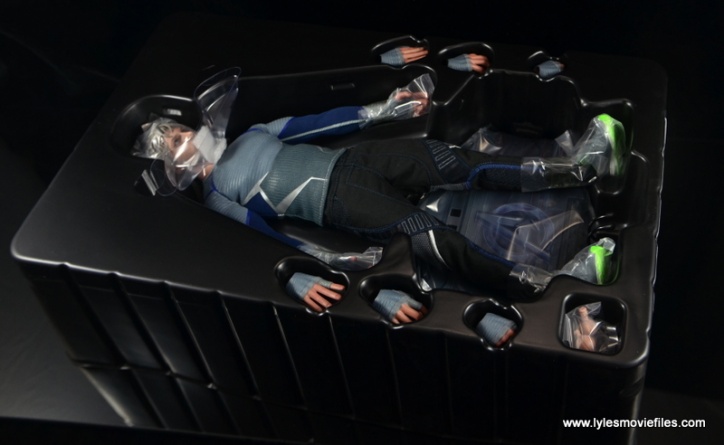 Accessories:  Hot Toys didn’t have a lot of options here and we get a pretty scant amount of accessories. There’s four pairs of hands — fists, relaxed, open palms and gesturing palms. And the Avengers stand. As with most Hot Toys figures, that’s not really the most essential accessory since he stands fine without it. 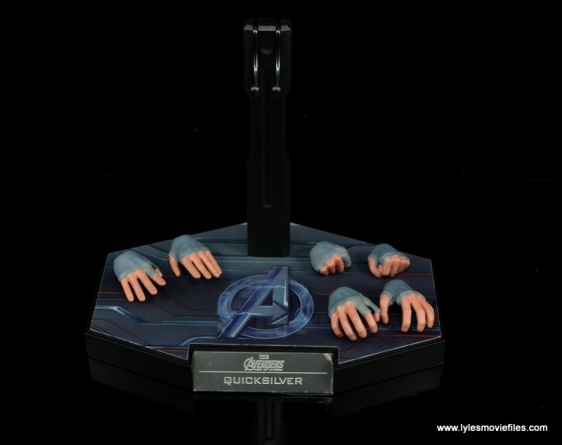 Quicksilver really would have benefited from pretty much anything more. Maybe the jacket he wore the first half of the film or some bashed Ultron drone pieces. 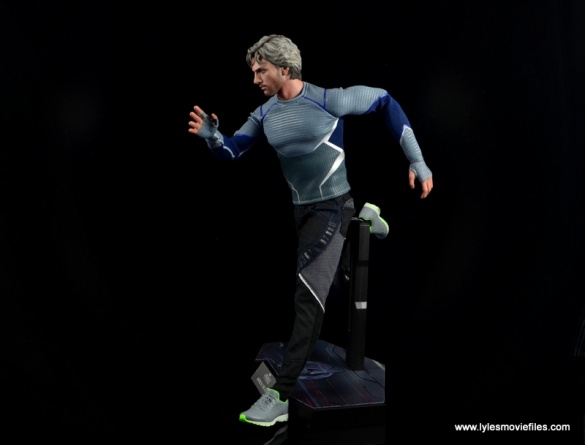 Worth it:  Hot Toys recognized Quicksilver isn’t as stacked as some other figures and priced him at $209. I still think that’s too high in this instance, but he’s aided somewhat in the sense this is the only version of the character we’ll get. 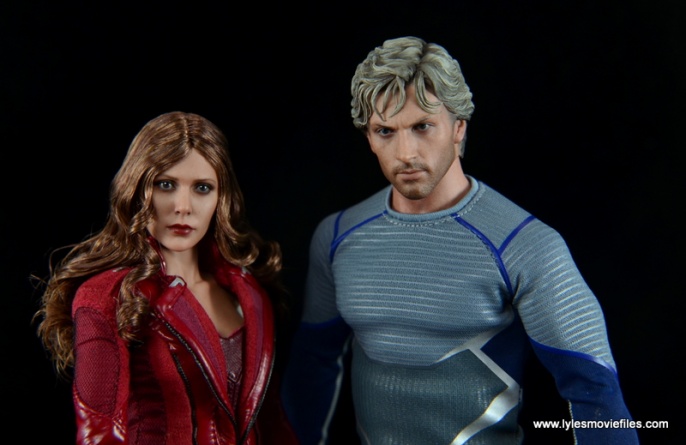 I stalked eBay to get Quicksilver $50 cheaper. That’s more along the lines of what the figure should run (no pun intended).

Where to find it:  Big Bad Toy Store currently has him in stock so if you’re leaning towards grabbing him, that’s your best bet. Right now Amazon has one just under $200, which isn’t a bad deal at all. 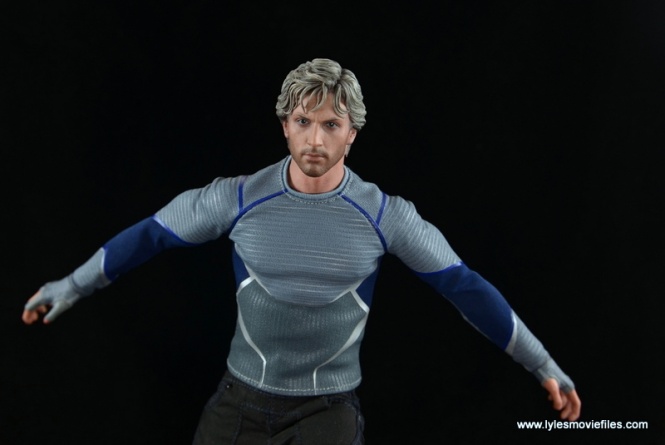 For the full rundown of figures, including the other Hot Toys figures, check out the main Action Figure Review page.