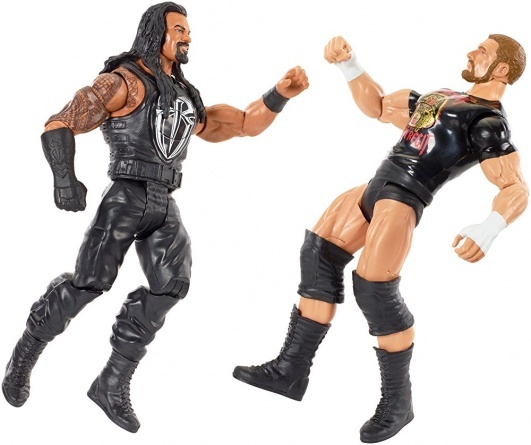 This line features recognition technology allowing the figures to recognize each other. Upon recognition, the figures will have specific interactions with the opposing figure. Not a bad concept at all.

Naturally, the set includes a new John Cena. I’m not a big fan of that head sculpt, but it works for this era of Cena as he’s less into fun and games.

Cena is joined by former champ Brock Lesnar and The Lunatic Fringe Dean Ambrose. I’m not sure of the scale, but hopefully Lesnar is taller and wider than Ambrose.

Wisely, Mattel didn’t stagger the release of the New Day. Series 2 includes Kofi Kingston, Big E and Xavier Woods. No sign of Francesca though. This series hasn’t lent itself to a lot of accessories.

One weird thing about the Tuff Talkers line is that everyone’s wearing shirts. For wrestlers, it’s silly to just have them in non-ring attire. But maybe Mattel figures this is a series best suited for backstage segments. On that front, maybe Mattel should get around to releasing a JoJo figure.

Next up on the two-pack front is Roman Reigns vs. Triple H. That’s likely a nod to last year’s Wrestlemania and Reign’s coronation as the Big Dog.