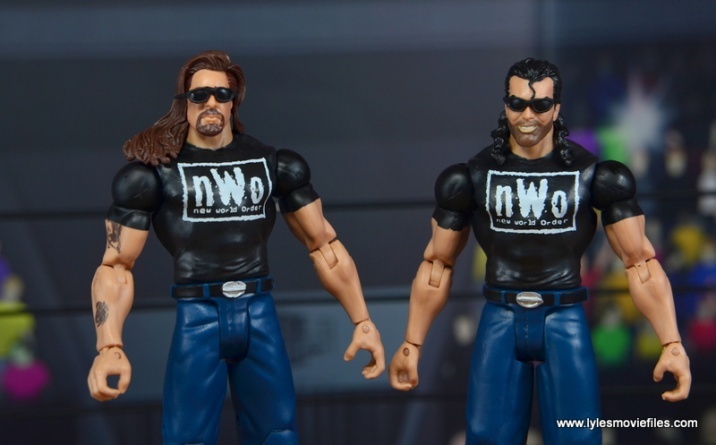 Sometimes all it takes is a really good sale to get me to pick up some figures I was on the fence about adding to the collection. Such was the case with Mattel’s Battle Pack featuring Scott Hall and Kevin Nash — The Outsiders. Let’s see if I’ll have buyer’s remorse or if this is another one you can chalk up for the good guys.

Hall and Nash’s invasion of WCW in 1996 forever changed wrestling history. When they weren’t creating chaos in the ring as The Outsiders, the forefathers of the New World Order ran roughshod over the promotion in their signature black and white T-shirts.

While I haven’t felt the need to get many non-wrestling attire figures, this piqued my interest since The Outsiders wore “their colors” almost as often as their wrestling gear.

Packaging:  Just like the 2015 edition Basic packaging, the Battle Pack is pretty simplistic. It’s perfectly underwhelming if you’re an MOC collector, but it gets the job done just fine if you plan on opening them like me.

The back packaging is where the work is most needed as it’s just a big picture of the two and the other two sets in this wave. The Nash portrait looks off for some reason even though that’s a pretty common Nash pose he commonly struck during that era.

As always, one figure is neutrally posed while the other has a more dynamic pose with the accessories on clear display.

Likeness: I’m pretty sure Mattel hasn’t debuted any new head sculpts in the Battle Pack series so I knew what I was in store for with this set. Still it was pretty silly that this is the exact same figure save Nash’s right arm and different head sculpts. 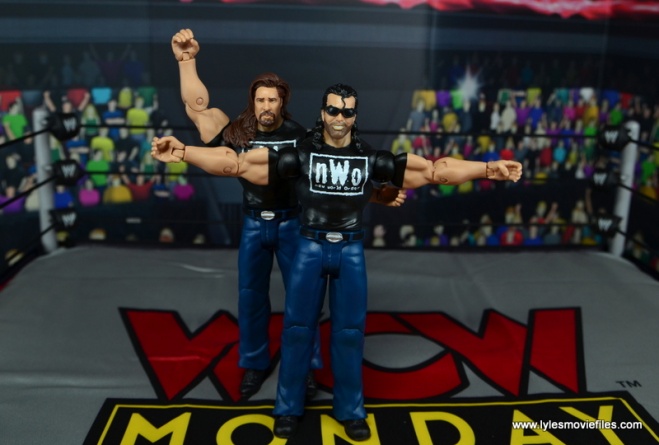 With Nash that’s a good thing as Mattel reused the excellent Elite 16 Kevin Nash head.  For Hall? Not as much.

The Hall portrait on the packaging is exactly what I think of when I envision nWo Scott Hall. This re-purposed WWE Defining Moments Razor Ramon Figure

is serviceable, but it’s not the cocky, smirking expression I’d prefer. Hopefully Mattel will do a new head sculpt for the inevitable red and black version Scott Hall. 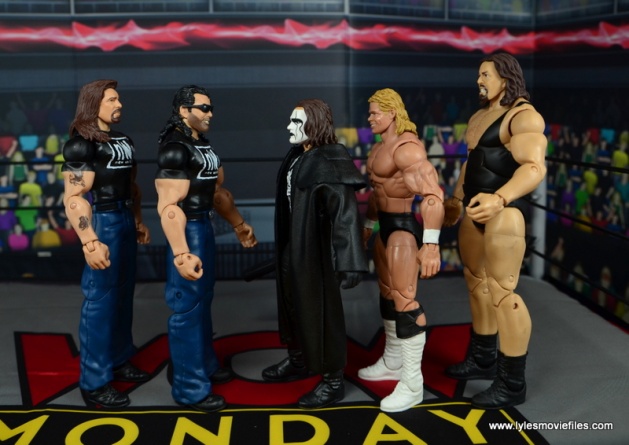 Scale:  Nash was one of the tallest guys in wrestling at 6’9″ while Hall wasn’t too tiny at 6’5″. The biggest reason I was reluctant in getting this set was it didn’t pass the eye test of accurately reflecting their height discrepancies. In hand, those initial concerns were correct.

Hall is just a hair shorter than Nash, but he is scaled almost exactly correct to The Giant. So Mattel dropped the ball with Nash’s height, not with Hall. Regardless that’s annoying. Especially since it makes their signature pose look silly.

Paint:  Basic line, basic paint apps. Most of the parts are molded in the appropriate color so the chances of paint gaffs are limited. I would have liked one of the two to have a different color jeans just to make them look a bit different from one another.

The nWo tampo is clean on both figures.  As this is the Basic line, Nash’s tattoos aren’t painted.

Articulation:  The Basic articulation scheme is perfect for non-wrestling versions, but the restricted hip articulation is the one point I missed the most in this set. That makes anything but the most … basic poses are pretty much useless. Not that I needed the Outsiders to do a whole lot more than pose and look cool in the ring. Or to lawn dart Rey Mysterio Jr. 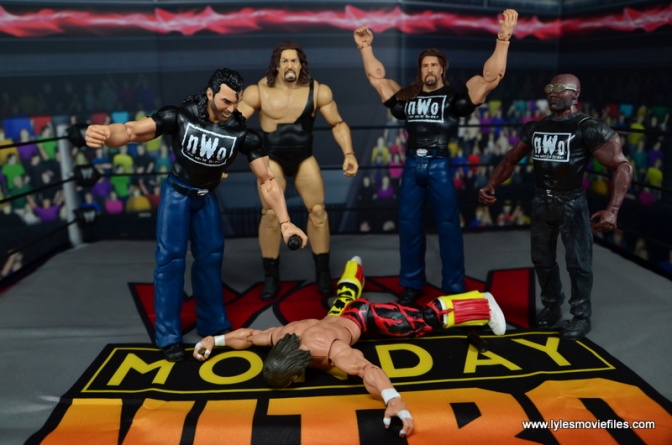 Hall and Nash both have: 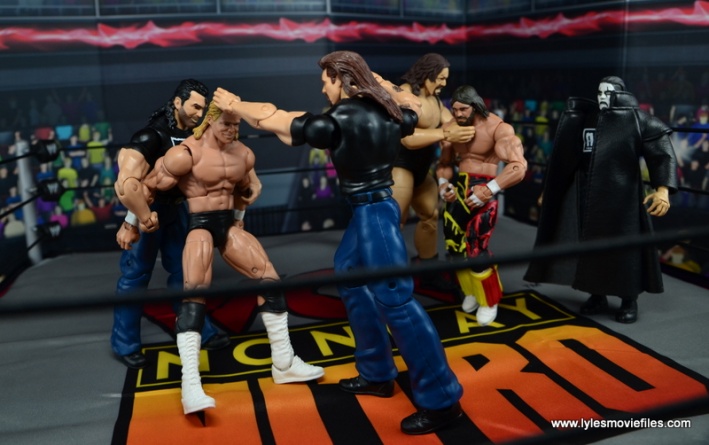 Accessories:  Battle Pack collectors are used to getting kinda chintzy accessories. In some cases, like the WWE Battle Pack Series #34: Lana vs. Rusev Action Figure (2-Pack)

set, there’s a pretty useful accessory. Hall and Nash have appropriate accessories with a pair of sunglasses and spray paint cans, but Mattel could have increased the value by adding a baseball bat or two as well. 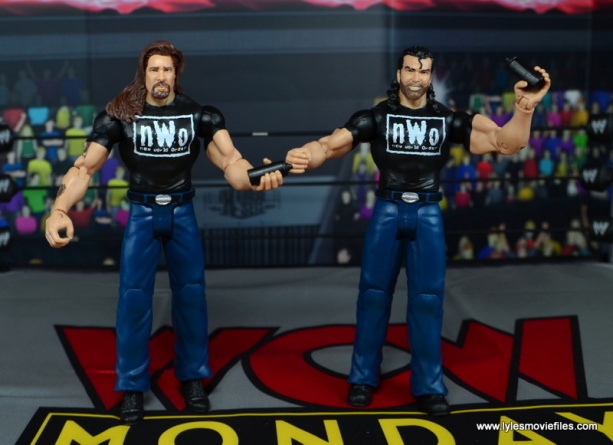 Worth it? This set is regularly priced at $20 so you’re paying exactly the price of one Basic per figure. Since most Basics don’t come with an accessory, there’s a bit more value.

There’s an Elite Scott Hall figure in this same attire floating around on eBay with a better head sculpt. That’s probably a better move than getting this set as it’s a little too basic if you want your nWo to do anything more than pose in the ring. Nash’s shorter stature isn’t a great selling point either. 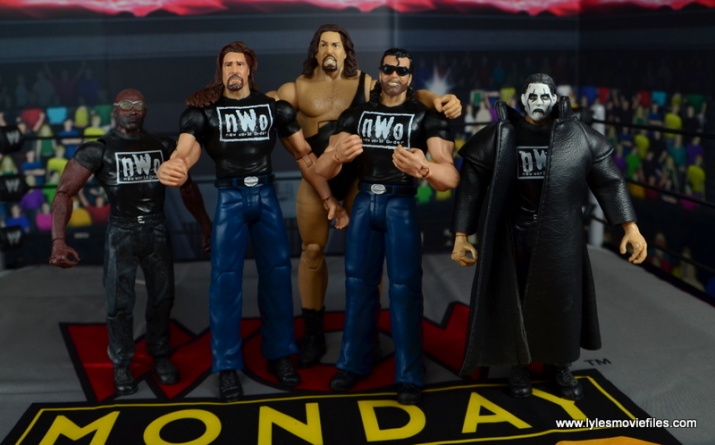 I could use the Nash head for my Elite 16 Nash to have a more accurate hair color. The sunglasses and spray paint come in handy for nWo action. As for the figures? They look fine standing there, but that’s about it.

Where to get it?  Mattel was so happy with the success of this pack that they’re re-releasing it in an upcoming Battle Pack series. You don’t have to wait and can still get them from Amazon.com here:  WWE The Nwo – Kevin Nash & Scott Hall – Battle Pack Series 36 – With Accessories

Big thanks to the guys at Extreme-Sets.com for the amazing wrestling backdrop. Check out more of their wrestling theme pieces here.