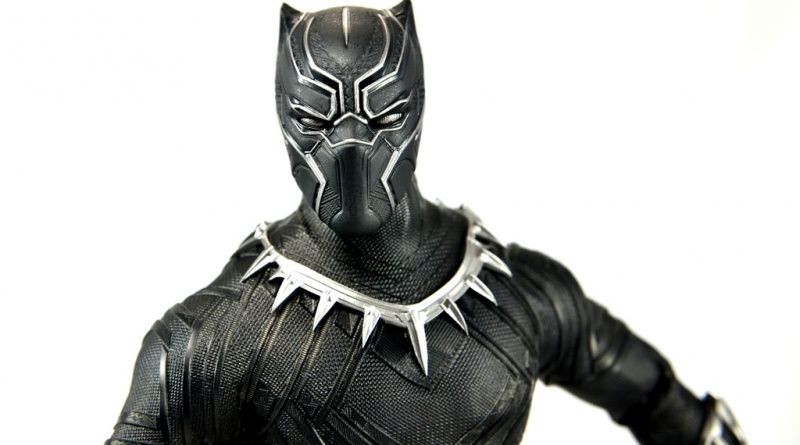 I’d been stoked for Captain America: Civil War the moment Black Panther was announced as a main character. Black Panther is one of my favorite Avengers and I’ve been anxiously awaiting his arrival into the Marvel Cinematic Universe. And Chadwick Boseman did not disappoint. I’m already geeked out about next year’s solo Black Panther film, which has my expectations up to 11.

The Hot Toys Black Panther was a Day 1 pre-order for me and I’ve been eager to place him alongside his fellow Avengers. Let’s see if the figure delivered.

Packaging:  I love the Civil War packaging. It’s so much more dynamic than the dull character images from Avengers: Age of Ultron. This packaging prominently features the figure while the rest of the gatefold image features the Civil War carnage just like the comic. This is going to be hard to top as far as my favorite packing this year.

To help you keep track of the teams, there’s subtle Iron Man logos and embossed logos throughout the package as well as a red interior package. 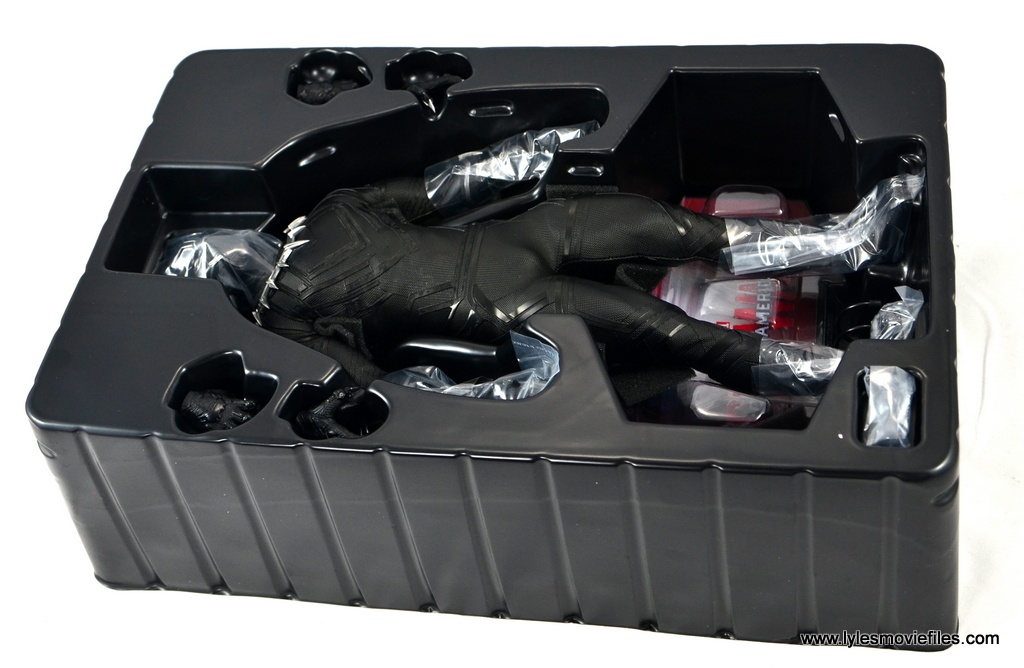 As usual, Hot Toys includes a slew of plastic wraps around the arms and legs that are tighter than I’d like. Be mindful about using scissors to free him up though. 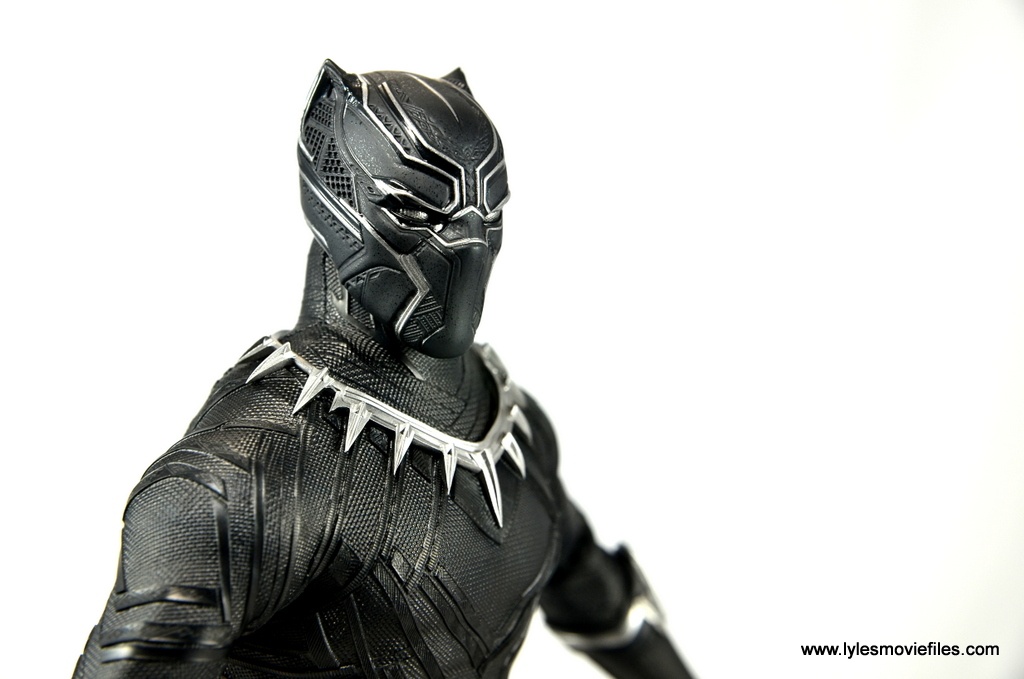 Likeness:  Just like Snake-Eyes from GI Joe, there’s something striking about a figure clad in all black with silver accents. With most of the MCU characters having more colorful outfits, Black Panther really stands out.

Watching Panther in action in Civil War it might be hard to appreciate the intricacies of his outfit. Marvel’s costume designers outdid themselves with Panther’s costume as it has pattern ‘strips’ throughout that gives more of a tribal visual. Hot Toys captured that look perfectly. 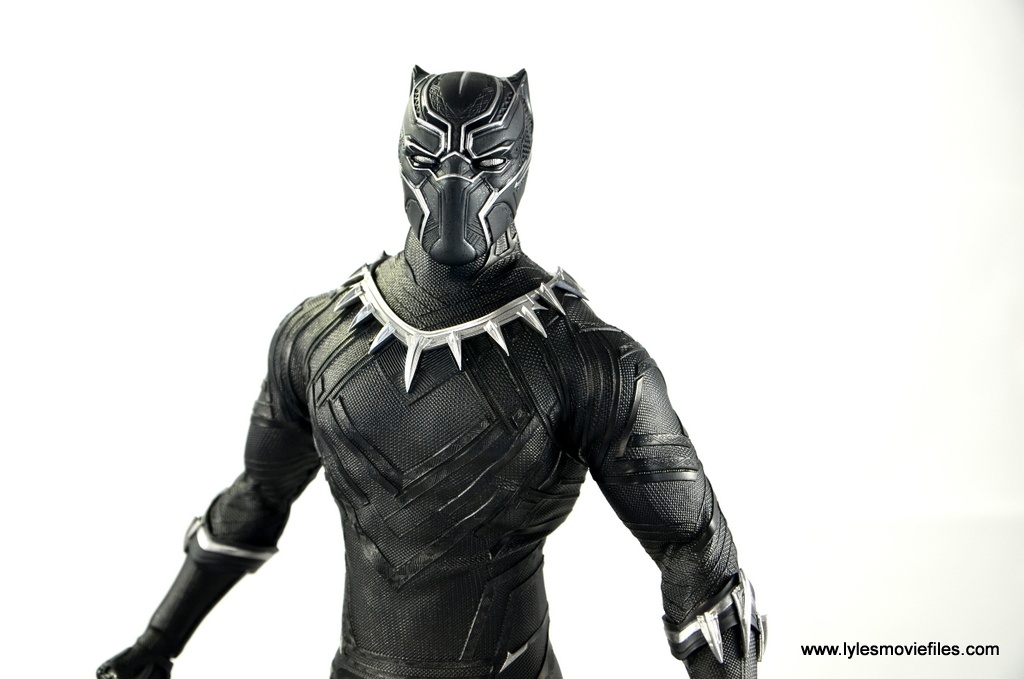 The trick with this costume is to break up the source material’s plain black to give it more depth. That carries out especially well with the figure from the patterns and paneling on the helmet, the necklace, bracelets and feet. This is a costume that could have been done on the cheap, but the extra attention to detail really helps it to pop. 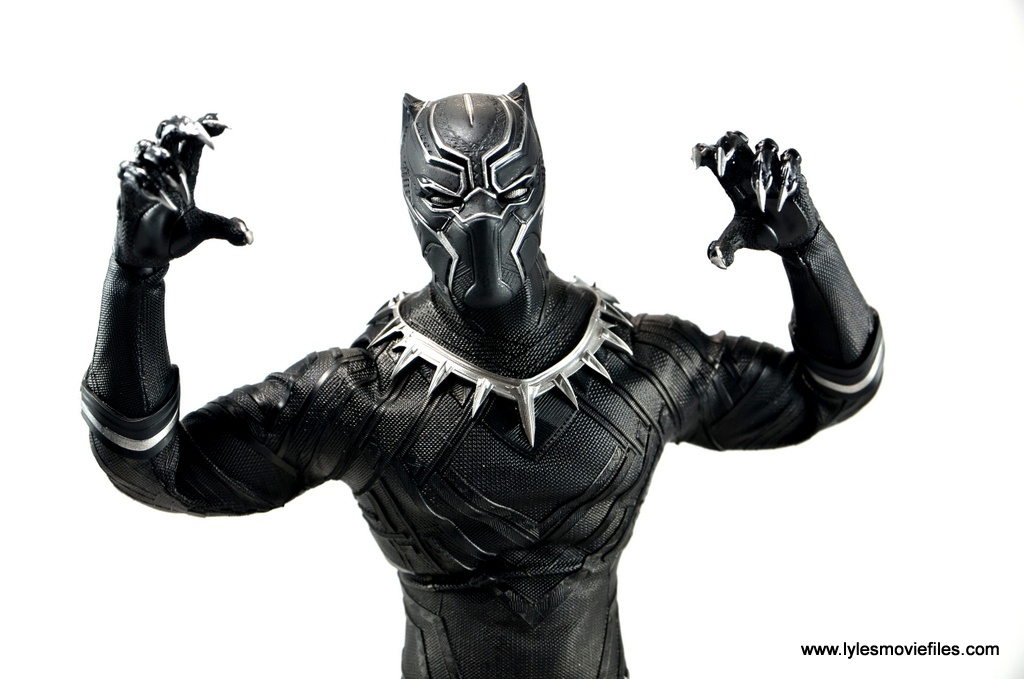 Typically, you wouldn’t expect a lot of emotion in a helmet head sculpt, but there’s a great amount of expression here. I can almost envision Panther sizing up his opponent before striking. 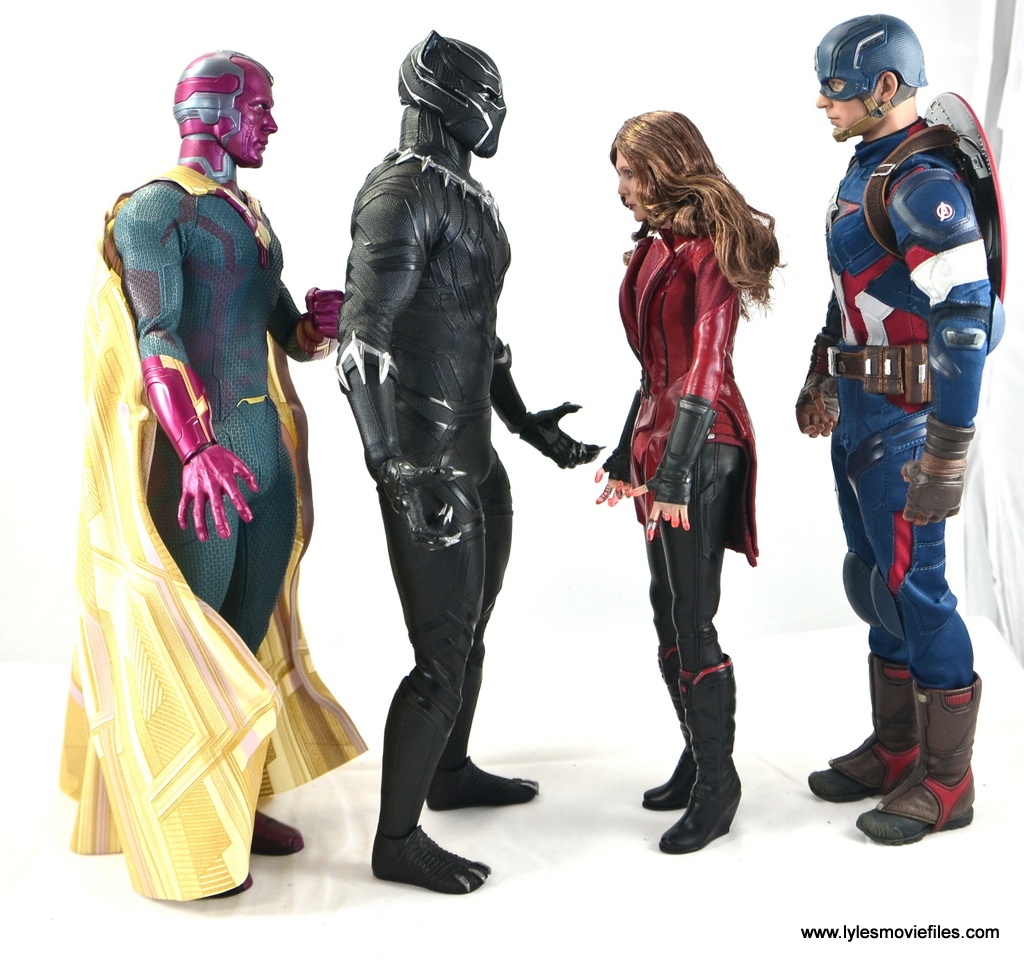 Scale:  This is a subtle thing, but Hot Toys gave Black Panther the beefier superhero physique similar to Captain America. In reality, Boseman is only an inch taller than Hawkeye’s Jeremy Renner who Hot Toys gave the smaller, slighter body. I like that just from a standpoint of making Panther comparable to Captain America. The height and build gives him an extra degree of importance. 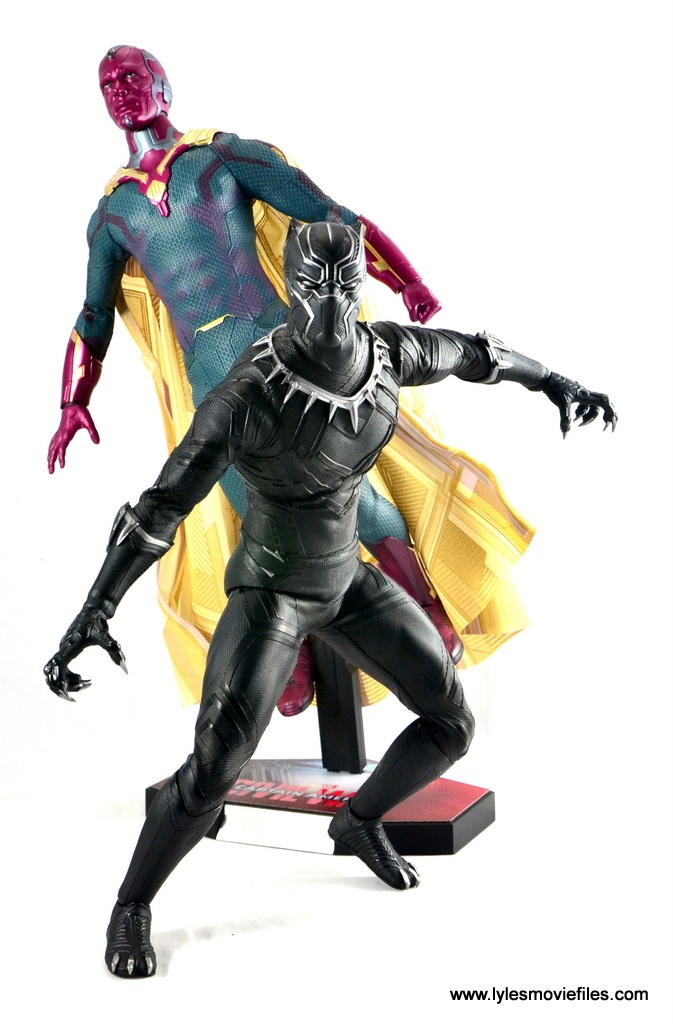 Paint:  With no alternate head sculpt (more on that later), there’s not a lot of paint requirements here. Part of the expensive with Hot Toys figure is the meticulous hand painted work on the head sculpts to further bring out the actor’s likeness. 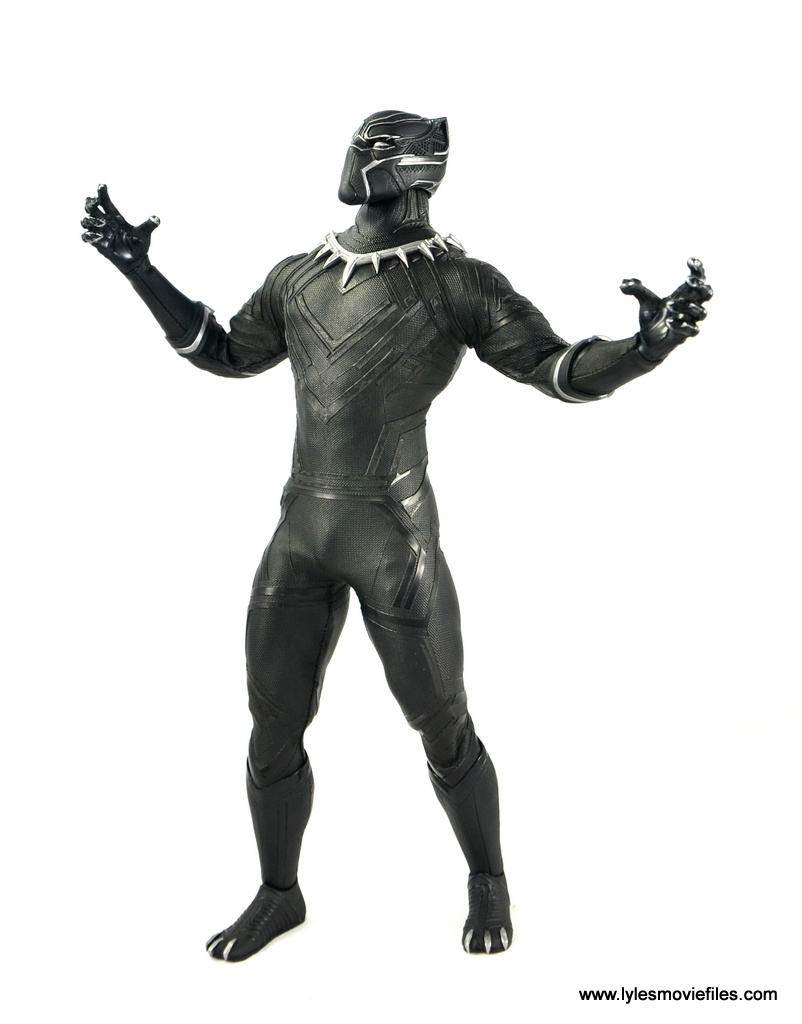 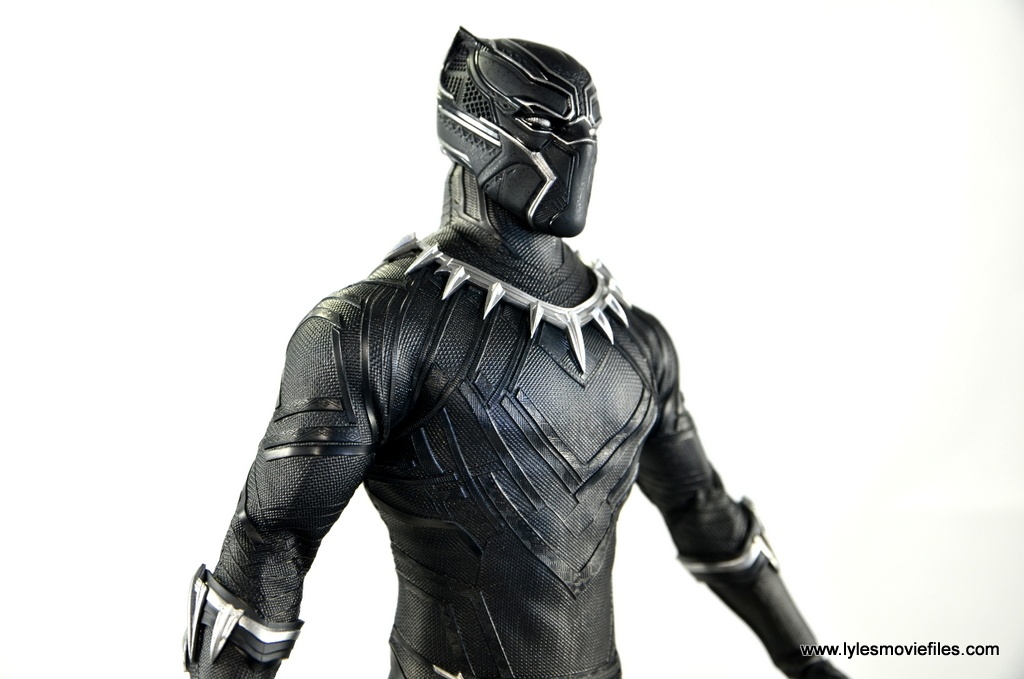 Uniform:  Hot Toys uses a spandex type material for Black Panther’s outfit. It’s nicely form fitting and has a ton of detail with the layered approach of the strips. Most of the figure is in the costume save the helmet, hands and feet so it was important that the outfit came out well.

It does and the sheen to the material helps give it an extra oomph. Sometimes, even the best Hot Toys outfits look a little poofy, but Black Panther really looks like a superhero outfit come to life. 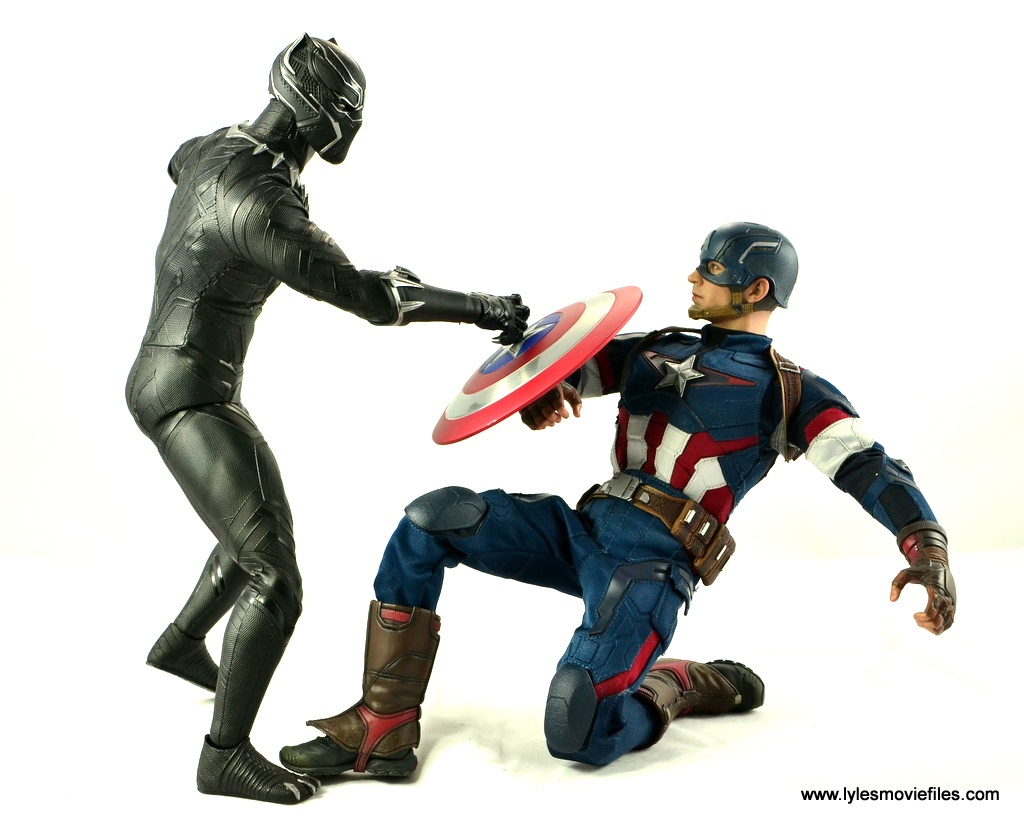 Articulation:  Initially, I thought the costume was so tight it severely hampered the articulation. That’s actually not the case at all as Panther has some of the easier articulation to manage of most of my Hot Toys figures.

Hot Toys gave the outfit the slightest amount of give allowing for great movement without bunching the costume up too much when posing him. The material has enough give that you can put Panther in some really fun poses. I didn’t think a leaping kick was possible, but he pulls it off without trouble. 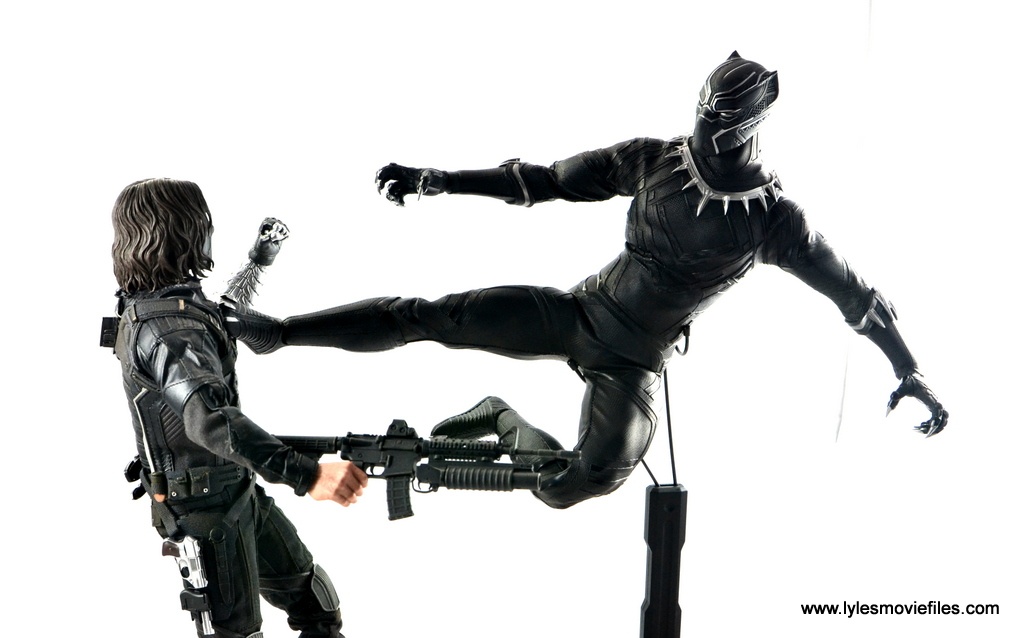 As usual, be mindful of how the Hot Toys body moves so you don’t pop anything. Unlike some of the others, Black Panther will be a lot harder to fix if something pops out of the joint. 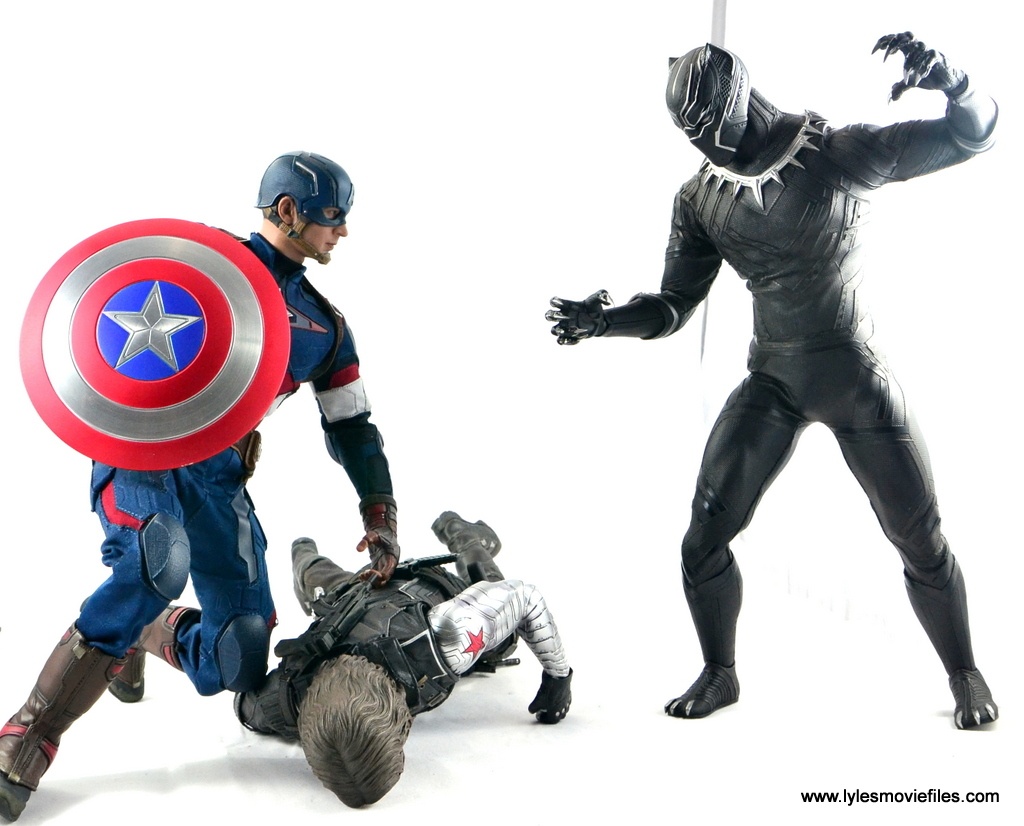 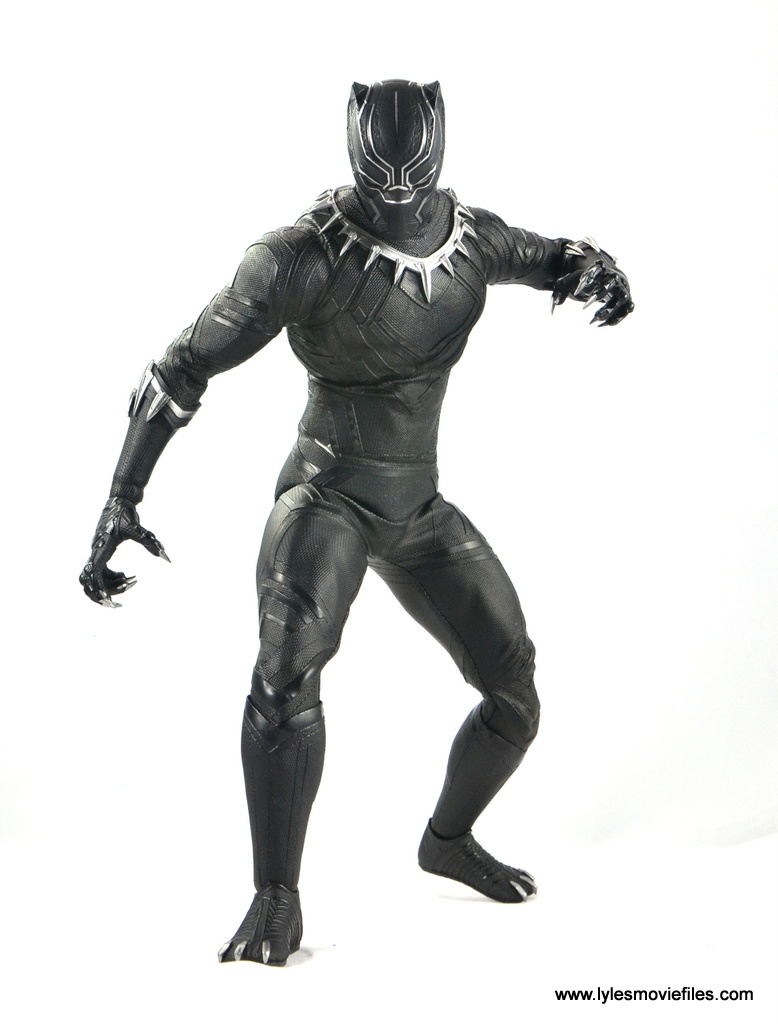 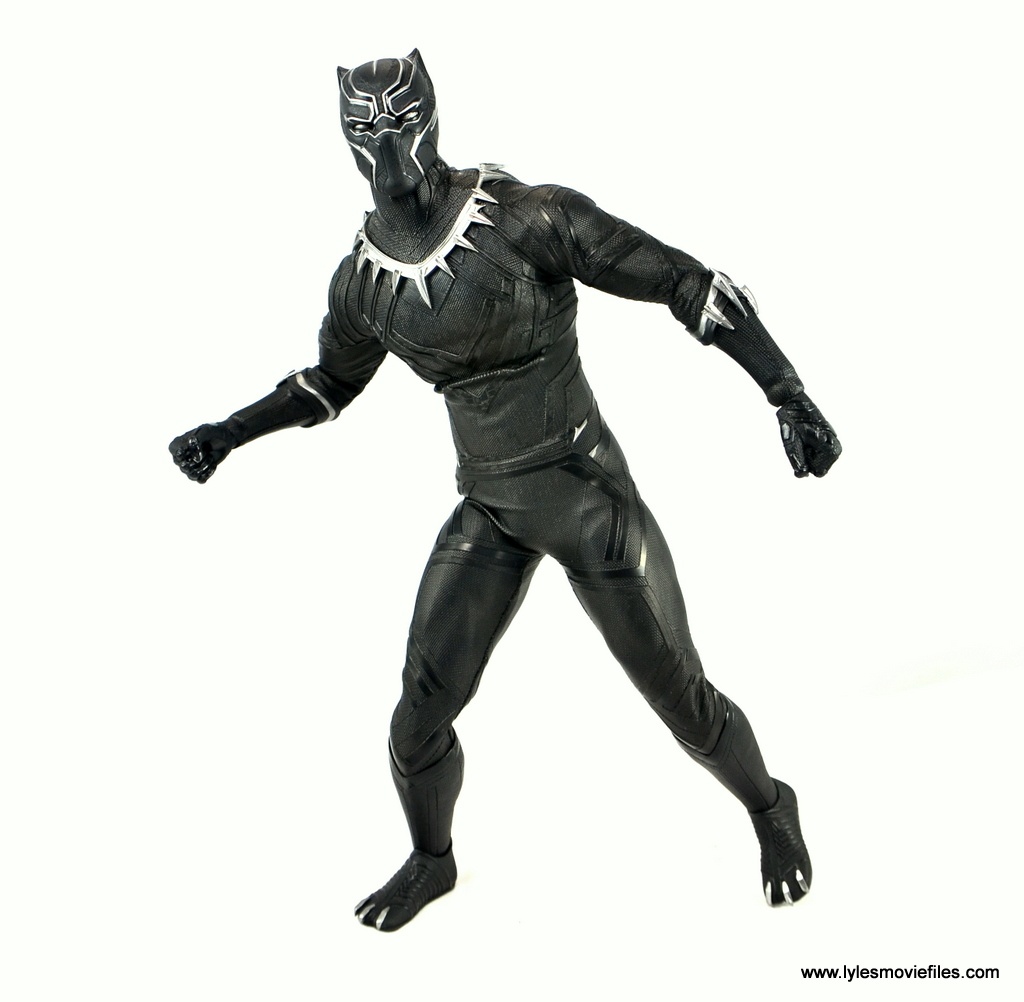 I wasn’t able to get a full ready to pounce pose or crawling type pose, but I’m not entirely sure that’s possible. We do get enough pose options though so it was hardly a big deal.

Accessories:  This is the category where the Panther comes up lacking. He comes with three pairs of hands: one set of fists, clenching hands and clenching hands with claws. And a Team Iron Man stand. That’s it.

The biggest disappointment here is the absence of a Chadwick Boseman alternate head sculpt. Even the Hasbro Marvel Legends version included that with the figure. Since the license isn’t an issue, I’m betting Hot Toys is holding out for the Black Panther solo film to release a Boseman sculpt to entice double-dip purchases.

While that’s disappointing, it’s just as well. I have alternate head sculpts for Iron Man and Captain America, but keep their ‘in-action’ heads for display. But I do like having options.

Fortunately, the hands are useful. In the instructions, Hot Toys warns to be extra careful with the claw hands as the points are sharp. They’re not kidding – I punctured my hand slightly – so be careful when posing Panther against characters with easily catchable cloth parts. 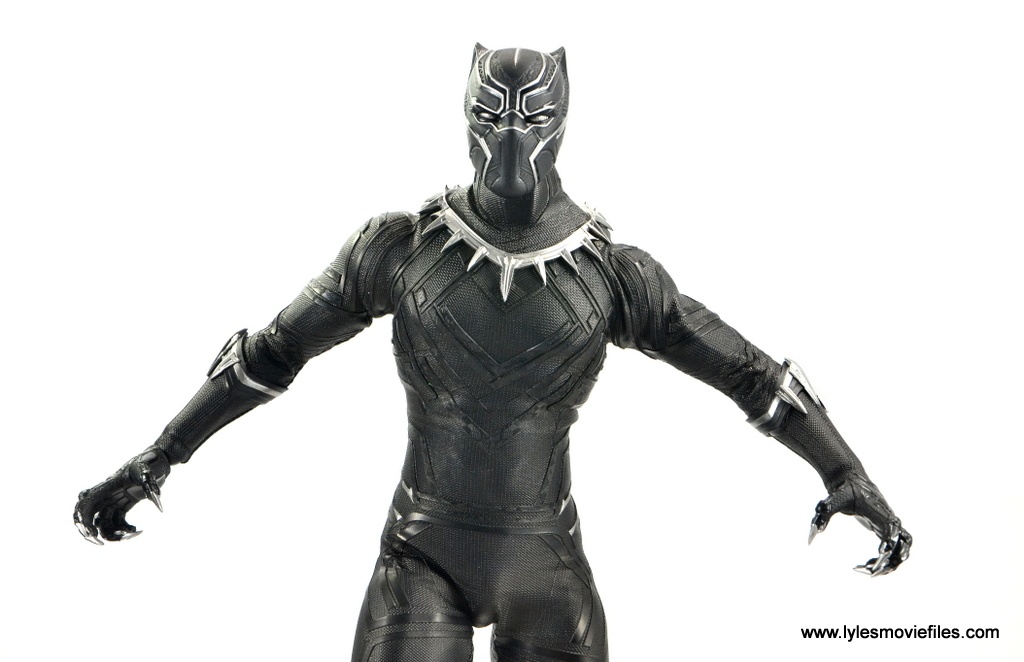 The fists are solid and the open hands are cool. I didn’t have a lot of problems swapping them out this time, which is a great thing. The stand is actually useful this time as it aids in more dynamic Panther poses.

Worth it?  Hot Toys was asking for $220. That’s excessive considering the lack of accessories for Panther compared to a Thor or Hawkeye, who also clocked in at that price with far more accessories.

Some of the costs is likely from the outfit, but it would be easier to justify with the un-helmeted head sculpt. There’s no doubt Hot Toys is cashing in on Black Panther’s popularity with this price tag when $20 cheaper would have been more reasonable. Quicksilver had the same amount of accessories and he was $209. 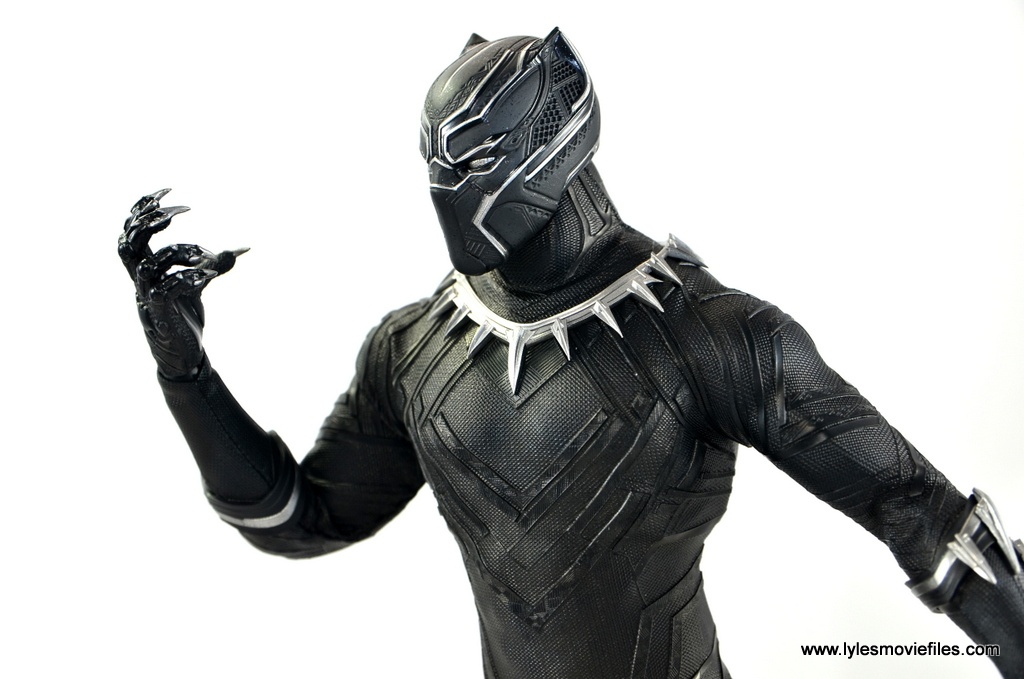 Lack of head sculpt and accessories aside, this is Black Panther as he appeared in Civil War. Hot Toys did a great job nailing that look and he is a great addition to my Avengers display.

Where to get it?  Sideshow currently has Black Panther on the waitlist. You absolutely should sign up for that before he becomes sold out. I’ve been waitlisted for four items and got all of them.