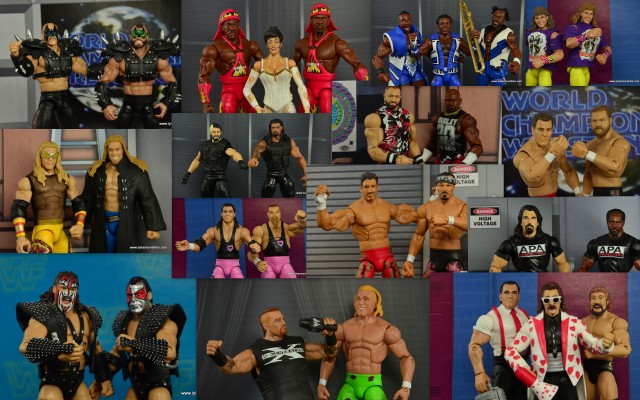 For the most part, the first round played exactly like expected. It was the boring all chalk round. The only ‘upset’ was a 5 seed beating a 4 seed. With the second round, count on a lot more shake-ups thanks to some pretty intriguing match-ups.

Here’s the break down from the first round if you missed it.

The Firepit region has what I expect to be the best match of the second round, but The Opera House also has a real good looking match up. It took me longer than I anticipated acting out the first round, but with less teams, the second round should be a lot easier. Now onto the votes!

Polls will close for this round on Tuesday.

Booker T and Stevie Ray had a relatively easy first round match-up against Legacy, but the chips could get cashed in when they face off against The APA. Bradshaw and Farooq will definitely unleash their hard-hitting moves, but will Harlem Heat’s agility and guidance from Sister Sherri turn the tide?

In what could easily be the highlight of the second round, The Hart Foundation and Rockers renew their rivalry with the highest stakes possible. The Harts look to continue their dominance over the tag team specialists while Marty and Shawn feel renewed from finding their smiles after a first round victory over The Hart Dynasty. This has the makings of a classic.

After an easy first round match-up, E&C see their competition dramatically improve. The Shield is every bit as agile and cunning as the purveyors of awesome, but Roman Reigns’ strength and power edge might give the upstarts the advantage. But the longtime friends still hold a valuable experience edge that could take them to the regional finals. This is one of the most intriguing and unpredictable matches in the second round.

In a battle of sneaky, underhanded teams, it might come down to which team is prepared to cheat the most. The Outlaws survived the massive onslaught of The Natural Disasters while Los Guerreros stole a victory from America’s Team. The most important person in this match might be the referee to try and keep up with all the shenanigans.

New Day came within one vote of having a second round bye. After a hard-fought match-up with Jeri-Show, do The Samoans have anything left in the tank to earn a ticket to the regional finals? Or does New Day have more Positivity Power to grab another victory?

This 2 vs. 3 match-up could ultimately crown the regional winner. Tully & Arn made a career out of beating and outsmarting brawling tag teams, but The Dudley Boyz have been dominant for over a decade and have seen most anything the Horsemen can throw at them.

After steamrolling Kane & X-Pac, the Road Warriors have their focus set on a regional final against Demolition. But first, they’ve got to deal with the wily, Money Inc. Ted DiBiase and IRS cashed out The Usos and now look for a way to bribe their way to the regional finals. Money Inc. getting a win over the Warriors isn’t unprecedented though as they won their first tag team titles by beating the LOD.

Kerry and Kevin Von Erich are used to overcoming the odds thanks to their wars with The Freebirds, Devastation Inc. and the Dynamic Duo. Demolition has experience battling quicker, more athletic teams thanks to feuds with the British Bulldog and The Rockers, but none had as crippling a maneuver as the Von Erichs’ Iron Claw.