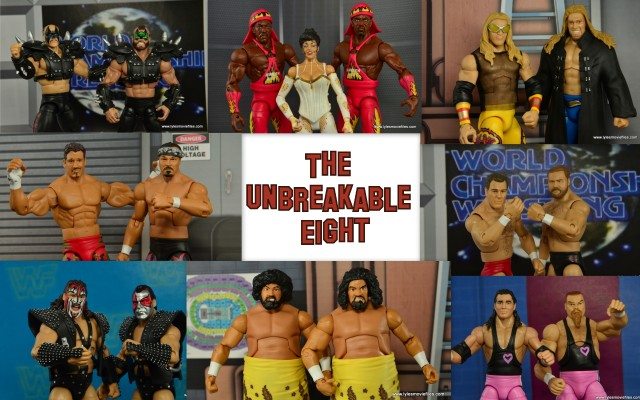 Help choose who survives their region to make it to the Fatal Four! We’ve gone from 32 teams to the Unbreakable Eight. But the true goal is still in sight for these remaining teams. Vote now and pass it on!

Here’s how the second round played out. And if you missed the kickoff, here’s what went down in Round 1.

EDIT: Looks like Yop Poll is getting caught up on Safari so if possible, use another browser to secure your vote this time. Thanks!

Justifying the selection committee’s work, the Unicorn Falls region is the only one to lose its No. 1 seed. At No. 5, the Samoans are the lowest seeded team to make it to the Unbreakable Eight. Can their Cinderella story continue or will they be the latest victim to fall prey to the Hart Attack?

This is a fitting finale for the Encore: Opera House region as we get a little Smackdown Six flavor, but pits Los Guerreros against the Attitude Era’s most acclaimed team. Which team will out wrestle or out cheat the other to survive the Unbreakable Eight?

It’s about to heat up in the Fire Pit as Harlem Heat faces their toughest challenge yet. During their lengthy run as tag champs, Harlem Heat battled some of the best in the business, but they never encountered a technically savvy and unscrupulous a team as the Four Horsemen. Who gets burned? Vote now.

The dream match for many wrestling fans during the 80s finally comes to fruition. Ax and Smash battle Animal and Hawk for the right to advance to the Fatal Four. Which studded, painted team makes it through? The choice is yours!

[yop_poll id=”29″]
With far fewer matches this time, I’m going to turn this around faster so get your votes in by Thursday.