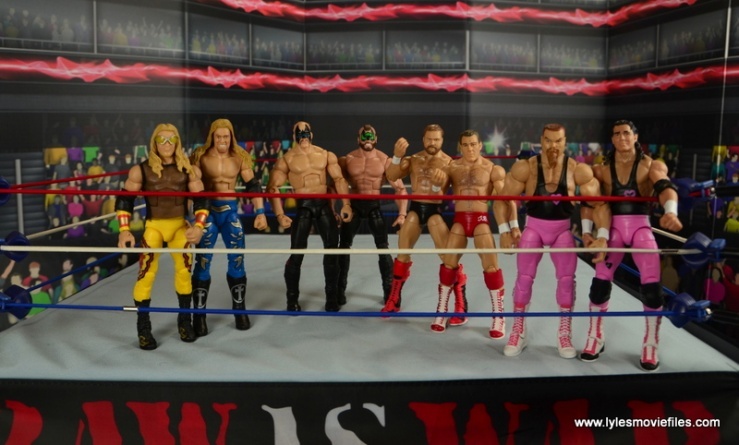 We’re winding down with the finale of this year’s March Bashness. Just like college basketball this is stretching into April too. But now it’s just about the end of the road for all but two teams as we vote on the Fatal Four winners. First let’s take a look at how the Unbreakable Eight played out.

Here’s how the Second Round broke down and here’s the first round action.

While the Samoans played Cinderella through the tournament, the clock finally struck midnight decisively. The Hart Foundation definitely seem like one of the teams to beat now. Can they be stopped?

E&C took care of Eddie and Chavo with little problem here. The end result is about what I expected even if I thought it’d be closer.

This was a real close one. I had a feeling the Horsemen would win, but Booker T. and Stevie Ray did not go down easily. Of the various tournament matches, I think this one would have been a great match to have seen play out in reality.

We came so close to seeing this match in the WWF, but Vince McMahon wasn’t interested. Here’s how everyone saw this one breaking down.

And now it’s time to decide The Fatal Four…

The Hart Foundation vs. The Four Horsemen

Only one technically savvy team will advance to the championship. Will it be the two-time WWF tag team champions or the tag team experts who captured both the WWF and NWA tag team titles? Vote now.
[yop_poll id=”32″]

The Road Warriors vs. Edge & Christian

It won’t be a laughing matter for E&C as they face off against The Legion of Doom for a shot at the finals. Will the dominant team of the 80s or the 90s win? You decide.