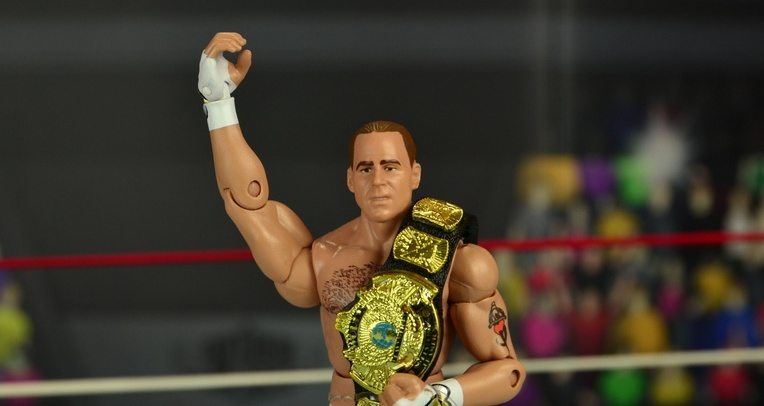 Shawn Michaels’ boyhood dream angle to become WWF champion was the center of WrestleMania 12. It also directly turned me into the biggest Bret Hart fan. I always thought Bret was cool even as he beat all my earlier favorites like Lex Luger and Diesel. But with the overblown HBK run, I looked at Bret differently. Like he was being pushed aside for the hot new model 90s wrestler. And I thought it was ridiculous that the Iron Man match had no pin falls until overtime. Bret got screwed way earlier than Montreal.

So in a lot of ways, Shawn Michaels from WrestleMania 12 played an important part of my overall wrestling fandom. Mattel previously made this iconic look back with its Entrance Greats line. Only one ‘minor’ hiccup. The EG line used the Basic articulation model to the frustration of many an Elite collector. After years of pleading for it, Mattel finally delivered an Elite WrestleMania 12 Shawn Michaels. Let’s see if it delivers on our action figure dreams.

Packaging:  Annually, Mattel selects two figures for the WrestleMania brand line. HBK is one and Triple H from WrestleMania 32 was the other. Shawn is clearly the only worthwhile addition for Flashback collectors while Mattel continues to pass over every opportunity to deliver a WrestleMania 2000 Triple H. Maybe in 2019?

The WrestleMania line packaging is nice and bright with blues and orange colors. That scheme would make a better fit for a Summerslam series. But since I’m opening it, the color choices aren’t a big deal. Along the sides we get more of a wrestling mode Shawn with his hair down.

The bio doesn’t have the usual detail of the specialized figures. This is the same stat card as opposed to any explanation of the outfit and its significance. I really, really hope Mattel will do that with the main Elite line at some point. 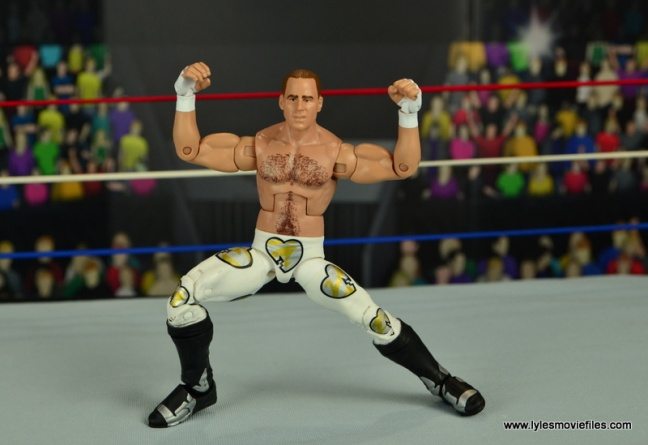 Likeness:  Mattel had a tricky decision here. Go with Shawn’s pre-match look with the ponytail or go with the more mid-match look with his hair down. I’m not a huge fan of this ponytail hair to begin with as it has more a sneer than the fun-loving babyface Shawn was playing at this point. The Elite 19 HBK features a better, hair down head sculpt, but it’s not quite perfect either. I’m surprised Mattel hasn’t continually cranked out HBK figures and made that ideal one for his 95-97 era.

The rest of the figure is like most of the 90s HBK figures. Inaccurate boots and missing knee pads. I give Mattel a lot of credit for how they’ve handled the WWE line, but they deserve flak for failing to get HBK right and continually going with this half-done measure. 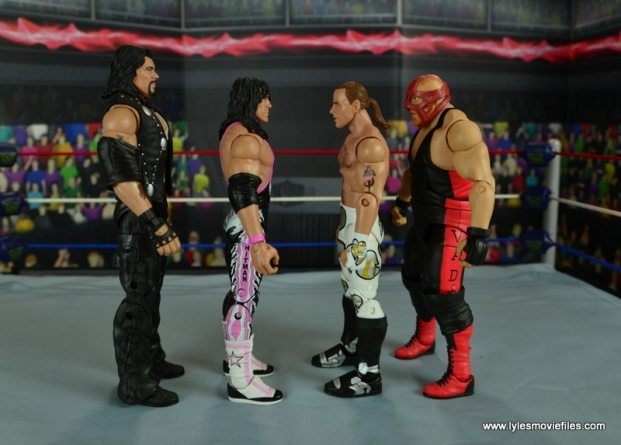 Scale:  Michaels is 6’1” the same as his archrival Bret Hart and shorter than the 6’5″ Vader and 6’10” Diesel. The Bret and Shawn match up perfectly and he looks appropriately shorter than the bigger guys.

Paint:  Beyond being his outfit he captured his first world title, this attire is iconic thanks to the classy gold and white color scheme. Mattel has the paint application process down on the HBK figures — another reason why the lack of variants is so confusing — and that’s no different here.

The hearts are nicely lined up and the Heartbreak Kid lettering on the back came out great. I’d still suggest taking a close look at the figures if you spot more than one just to catch any smears. White can get dirty very easily in the handling process. Mattel fixed an earlier HBK problem and made sure to add his chest hair. It’s applied well without looking too thick. 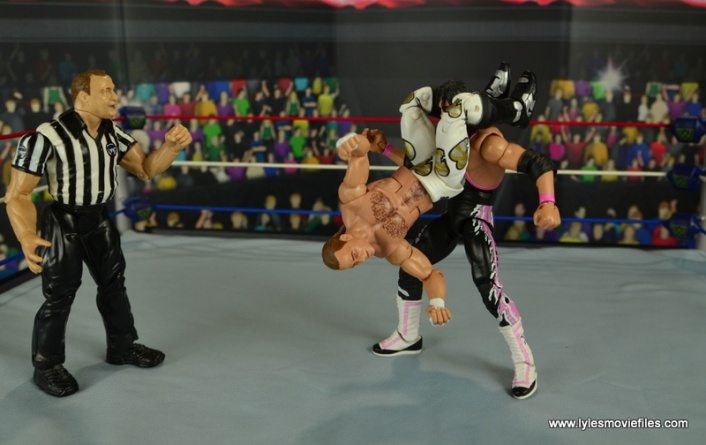 Articulation:  As an Elite figure there’s not a lot of big moves HBK can’t accomplish. Naturally more of the submission moves are a little harder, but for the most part, doable. If you find the right sweet spot, Shawn can be positioned to accurately hit Sweet Chin Music. 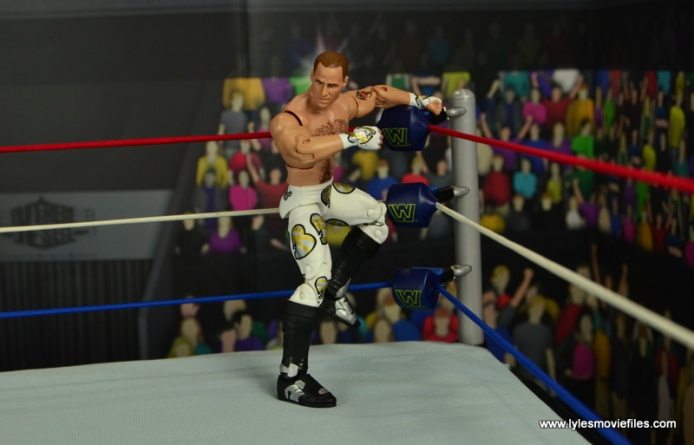 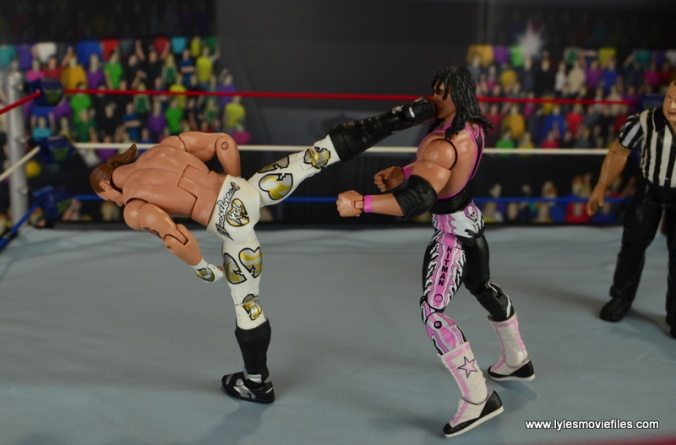 Accessories:  Making the head choice a little bit more confusing, Mattel included the WWF title belt. I’d assume if you’ve collected any main Flashbacks over the last 2-3 years, you’ve got a slew of these belts so nothing new here. I definitely would have preferred Mattel went all in and included Shawn’s ring attire. The EG figure isn’t completely cost prohibitive, but paying $45 for an outfit seems excessive.

Worth it?  I got this figure for $20, the going Elite rate. Since then I’ve seen him on sale for $16 and $18. The title belt seems kind of lean for such a high profile, highly anticipated figure. I don’t feel ripped off, but definitely don’t think I got one over on Mattel here. 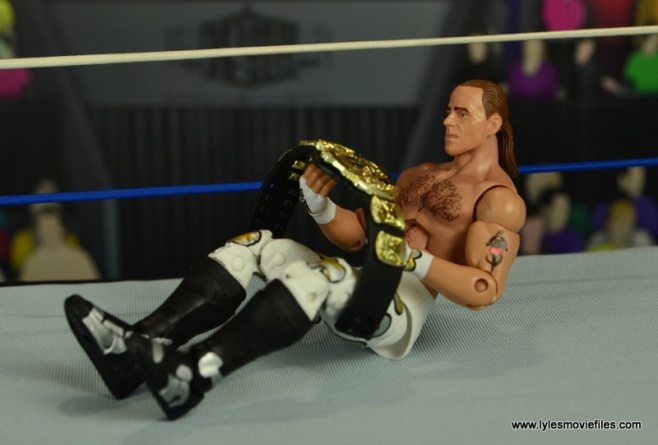 Mattel didn’t cram a ton of extras with his demanded figure. Besides choosing the wrong head sculpt this is a pretty good figure and worth getting for old school fans.

Where to get it? I got the WrestleMania 12 Shawn from Toys R Us. Since then I’ve seen him at Wal-Mart as well. Or you can always grab him on Amazon.com.

Pick up the wrestling arena backdrop set at extreme-sets.com.