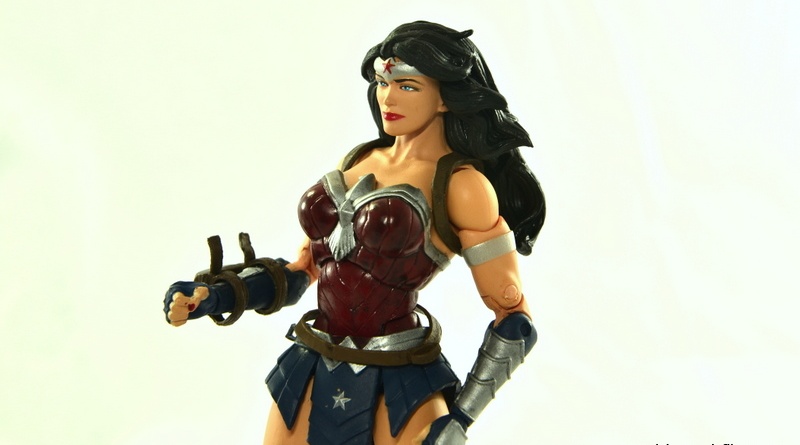 The DC Icons brand has taken a big hit in recent months. With DC Collectibles opting to shelve single pack figures after Nightwing and Supergirl and a transition to iconic moments, the future doesn’t look bright. That’s a big shame considering Wave 5 features at least two candidates for best of the series yet including the figure I’m looking at today, the Icons Wonder Woman figure.

She’s been long overdue at this point. Even Atomica got a figure! But the good things and waiting cliche has lasted so long for a reason, which is once again proven with the Icons Wonder Woman.

Packaging:  I like the classiness of the Icons’ packaging. It’s not flashy, but I love the clash of the white and the accent color. DCC still should write up some sort of bio though as it’s odd to just have pictures of the figures in the wave.

The side panel is a reminder this look is from the Justice League: The Amazo Virus storyline, which effectively ended the old New 52 and paved the way for DC Rebirth. 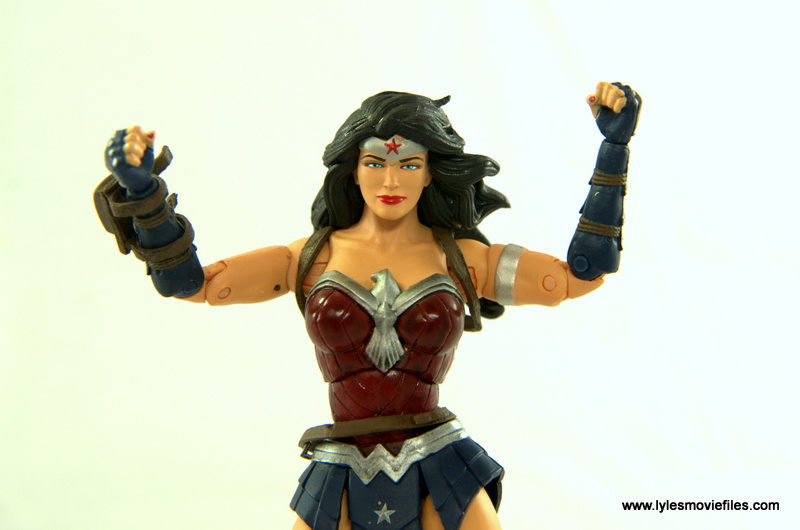 Likeness:   DCC has tried to incorporate a mix of classic and contemporary costumes in the line. While the Icons Wonder Woman isn’t in her classic attire, I was ecstatic with the costume choice. Wonder Woman is based on the Jason Fabok design from Justice League: The Amazo Virus arc. Of all the modernized versions of classic costumes, this is easily my favorite. It incorporates all the signature elements with a contemporary gladiator feel.

All of those aspects are incorporated nicely into the figure. The breastplate retains that New 52 plated look, but the Star Spangled panties are replaced by a layered gladiator skirt. That’s one of my favorite elements of this design. Instead of a white stripe along the boots, they have silver armor and the traditional bracelets are replaced by gauntlets. It conveys much more of a warrior feel. 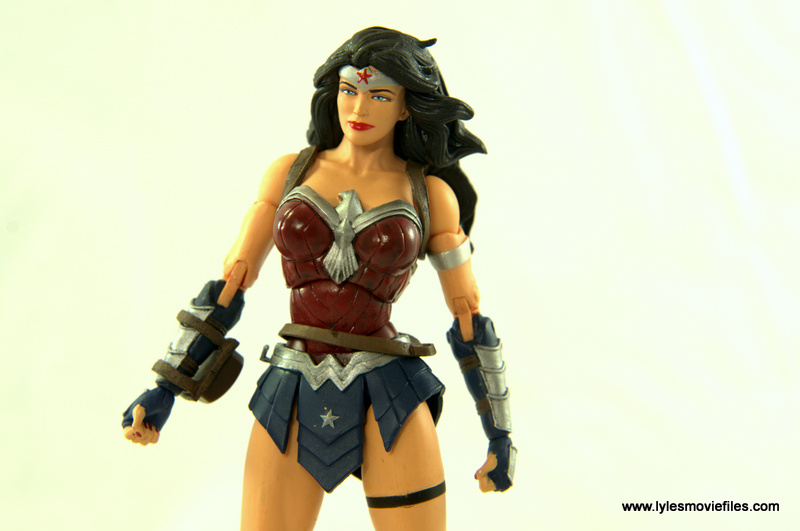 Wonder Woman has a great thoughtful expression as well. And I like the layering of her hair. This is noticeably different than the prototype face, but this is an improvement as it looks less supermodel and more like the Amazon’s fiercest fighter. There’s no shortcuts to the sculpting. Even the tiara star and leg band are sculpted.

Scale:  While the DC Rebirth 7-pack Wonder Woman is Marvel Legend sized, the single release fits alongside the earlier Icons figures. That was a smart and puzzling move by DCC unless the Rebirth set overall was just unintentionally drastically out of scale. 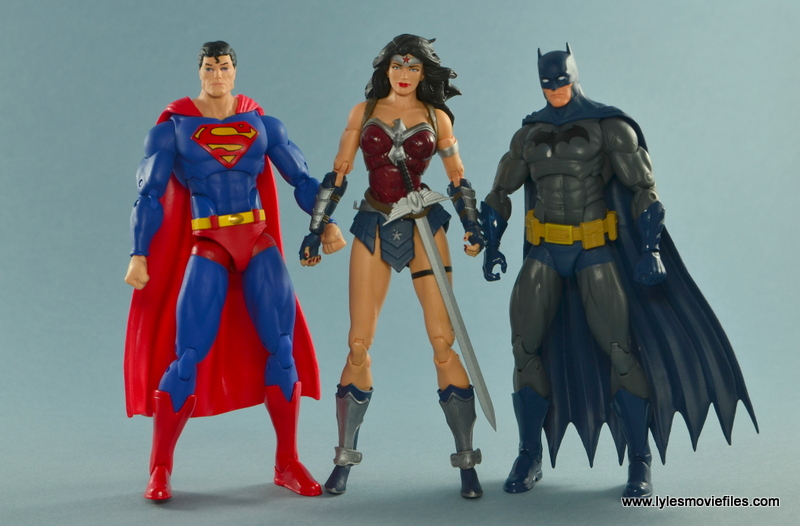 She does stand taller than most of her counterparts, including the slightly too small Superman. That’s more his issue though as Wonder Woman looks great scale-wise. 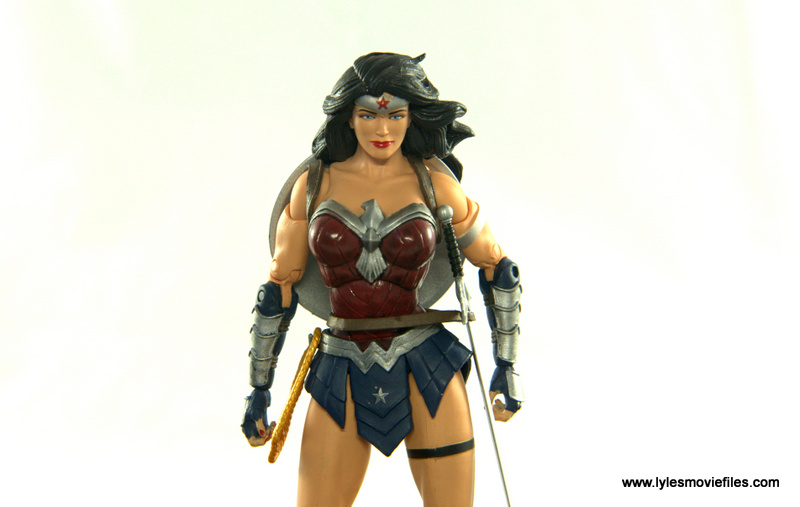 Paint: There’s a lot of paint applications here. The head looks great as Wonder Woman doesn’t have that funky eye paintwork as some of the earlier Icons. The tiara and star are fine. There might be a slight overspray on the breastplate eagle, but it’s definitely something you’d have to look closely at to notice.

There’s a nice wash on the armor so it’s not a flat grey. The only mildly obvious issue is some stray dots on the skirt. I saw about four Icons Wonder Woman figures and none had any major paint issues, which is a strong testament to the quality control efforts. 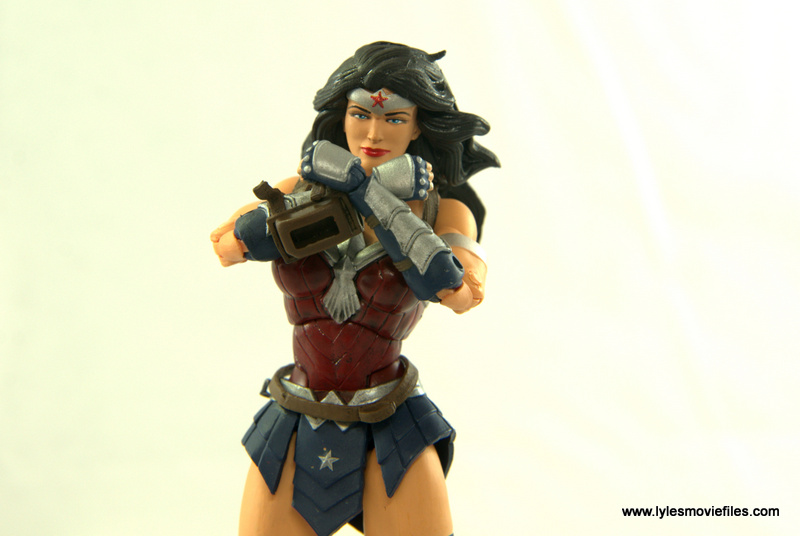 Articulation: A lot of collectors hate the Icons articulation scheme for its lack of thigh swivels and waist point. But honestly, with Wonder Woman, I didn’t really miss them at all. This isn’t quite Marvel Legends level of articulation, but what you can achieve pose-wise is still pretty impressive. The Icons Wonder Woman can hit a smooth side kick, which is something most female Marvel Legends can’t do convincingly. 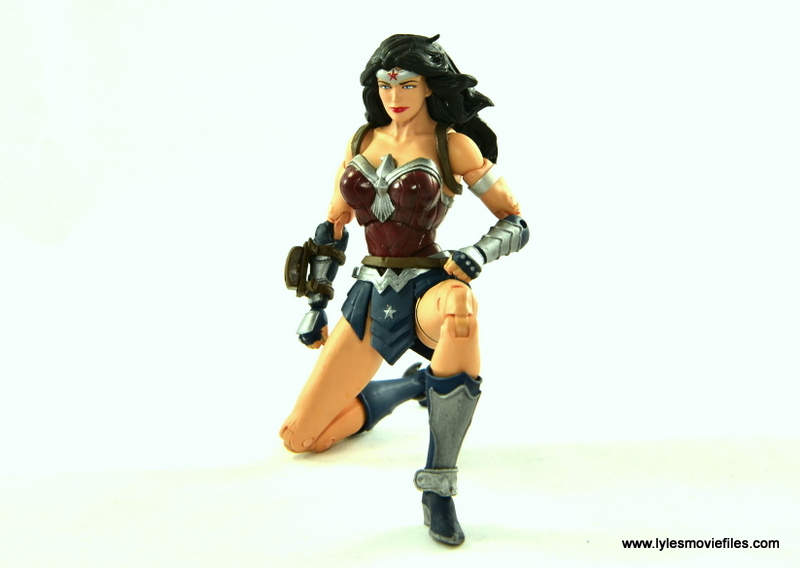 The hair limits the side to side movement and the up and down range is severely restricted. 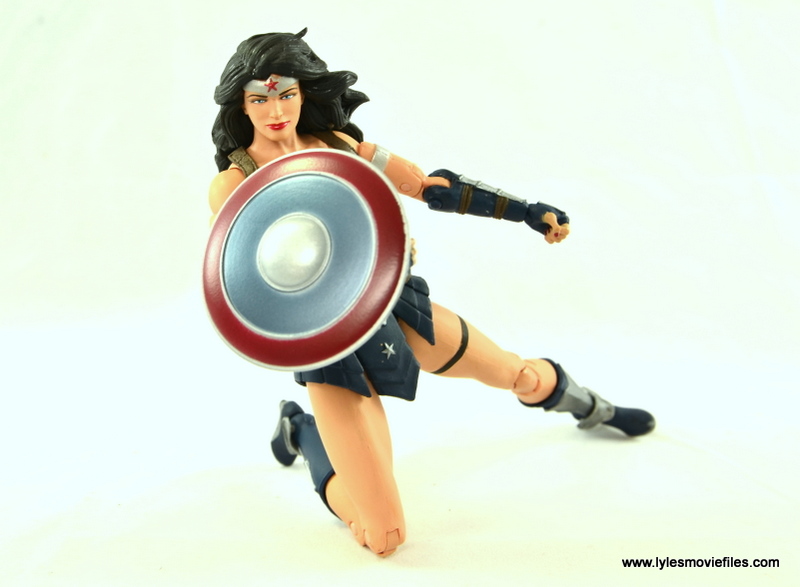 Accessories: Fitting for an Amazon, Wonder Woman comes loaded with accessories. She has her shield, shield gauntlet, sword, a set of open and fist hands and not one, but two golden lassos. The first is a coiled up version to attach to the clip on the belt. It holds OK, but any slight movement will send it flying off. 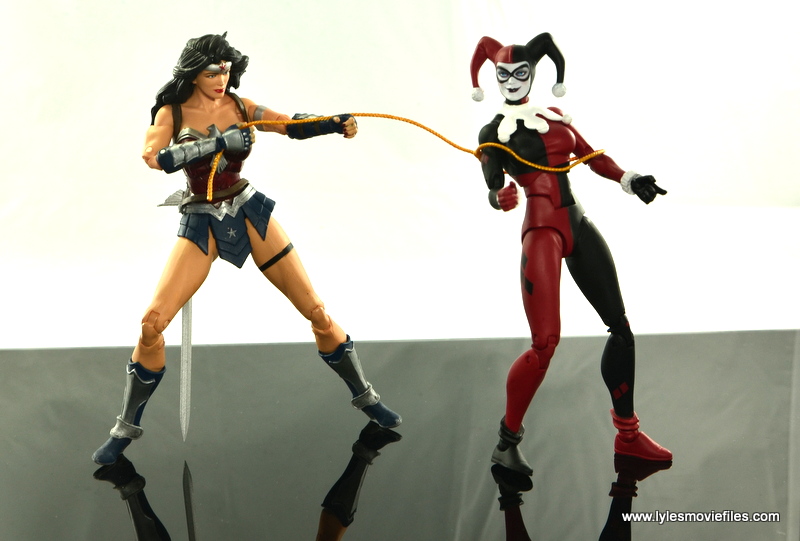 The other is an open lasso with a wide enough hoop to ensnare other figures. That’s a really nice touch and it’s great to actually have a function lasso.

The sword fits along the belt hook on the other side. That’s a nice, secure fit so you won’t have to worry about it sliding off. It moves around easily so it won’t hinder articulation either. I would have loved if the sword was a snugger fit in her hands though as the hands are slightly too open to get a firm grasp. 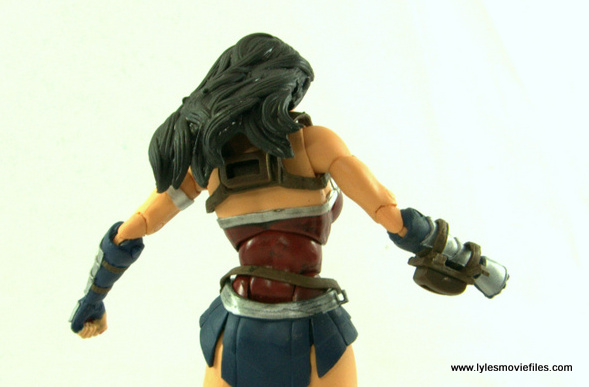 The shield fits snugly onto the shield gauntlet, which is also removable, but it tends to not stay upright on Wonder Woman’s arm. There’s a harness for Wonder Woman to plug the shield on the back as well. The hair almost has the right amount of clearance to work as intended, but when you move her hair, the shield pops off.

What I like the most about the Icons Wonder Woman is she has a lot of useful accessories that make sense for the character. Best of all, she can hold all of her weapons.

Worth it?  And here’s the sticking point. With the line struggling, DCC decided to raise retail price to $28. At $25 this was a tough sell for some folks. There’s nothing so intricate to justify the price point — the dedicated sculpted parts have been a staple since the line’s inception. With other companies, specifically Hasbro with its Marvel Legends line, tossing in multiple accessories, Build-A-Figure pieces and more plastic at a lower price point, even the solo Icons Wonder Woman isn’t a great value.

Wonder Woman is definitely in the running for the best figure in the line. She sports a high quality sculpt, a great paintjob and essential accessories. Had they fit slightly tighter they would be perfect. Even if you’re not an Icons collector, but love Wonder Woman, this is definitely worth picking up. 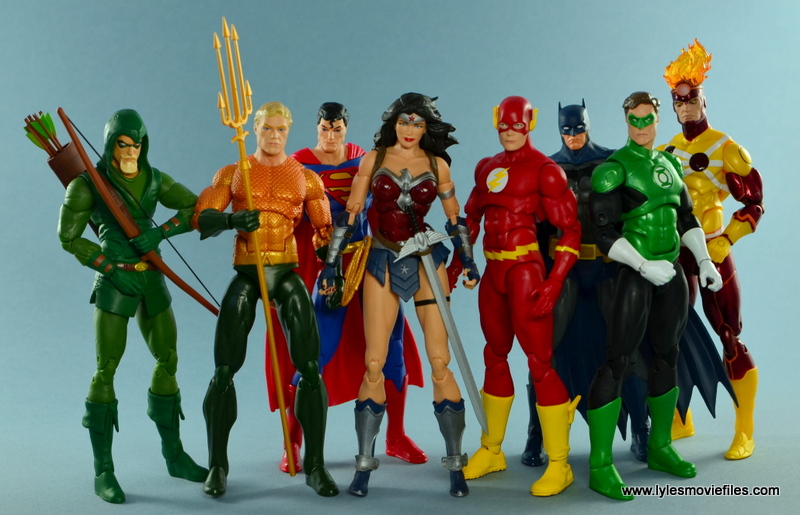 Where to get it?  As always, I encourage you to purchase these from your local comic book shop first. Part of the reason for the failure of DC Icons was not enough retail support. In this case, that’s almost solely comic book shops. Supporting them is generally a good practice unless they’re just trying to massively price gouge you. If one isn’t close by, pick her up on Amazon.com.