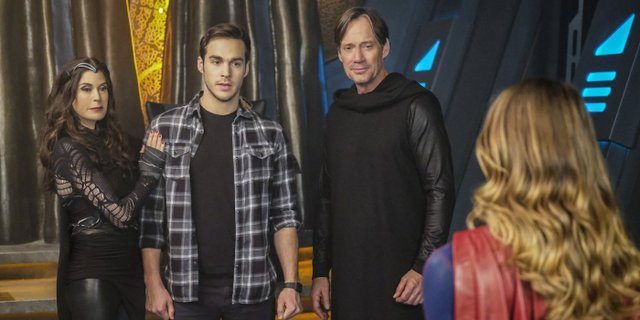 Star-Crossed was another episode where Supergirl took the back seat on her own show. While Exodus worked with an Alex-focused outing, the Winn-centric episode didn’t work as well. And whatever the opposite of I’m Here For It is, I’m exactly the opposite for all this dull romance drama.

There were two big subplots this week, but they kept annoyingly fighting for attention. Star-Crossed really would have worked better with devoting all the time on Mon-El’s big reveal. As it was, it played out like a waste of Teri Hatcher and Kevin Sorbo. Folks speculated this awhile ago, but yes Mon-El was the real prince of Daxam and his parents Rhea (Hatcher) and Lar-Gand (Sorbo) were eager to reunite.

Mon-El really no-sold his parents being alive. It’s one thing for him to have a change of heart about his beliefs, but to act like someone smashed his birthday cake and killed his new puppy when seeing his presumed dead parents didn’t ring true. But since his father is named Lar-Gand, Mon-El’s actual alter ego in the comics, maybe he’s the real Mon-El after all? Naturally, Kara made Mon-El’s family reunion all about her and his lies.

Lying love interests was the theme of Star-Crossed as Winn learned Lyra duped him to steal artwork. It was for a good cause though since she was trying to help her brother, who fell in with the wrong art crooks. Hopefully that museum sex was worth it, buddy. Maggie playing tough with him was a bit much since just last week she was helping Alex break all the rules for a loved one. 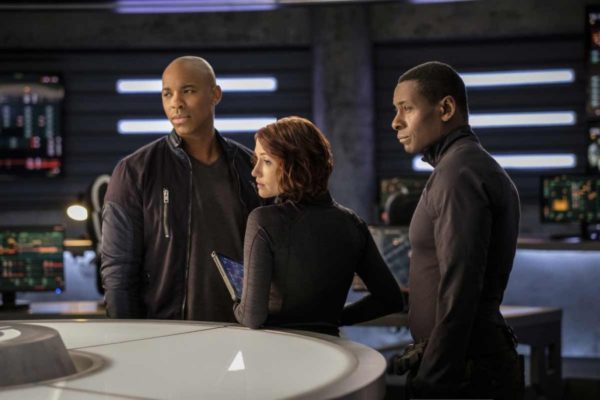 Winn did have some help with Alex and the CEO of CatCo as backup. Seriously when does James go to work for his day job if he’s spending all day at the DEO doing…something? The Winn and Lyra subplot was a little weak. It probably would have been better served if it had an entire episode to examine the alien art culture. Supergirl has gone so heavy into aliens this season that an episode about an alien seeking hidden messages in artwork could have been more engaging. It was too underdeveloped largely because Lyra hasn’t been developed to care enough about her betrayal.

Mon-El’s was a bit more complicated. Yeah, he lied, but the tension with Rhea and Kara made it clear he didn’t necessarily make the wrong call. And if I hear another spin on Make America Great Again, I’m going to scream. Not Silver Banshee scream, but loud enough to disturb the neighbors.

I want to fully be on Kara’s side in all this, but her character is being handled so inconsistently. The writers are giving her a lot more depth than the first season. But it’s a jarring switch from the happy go lucky character to coupled up with Mon-El Kara. Maybe it’s just that I hate watching Kara portrayed as a crying teenager upset at her boyfriend. At least we can count on an always great moment with Kara and Alex. 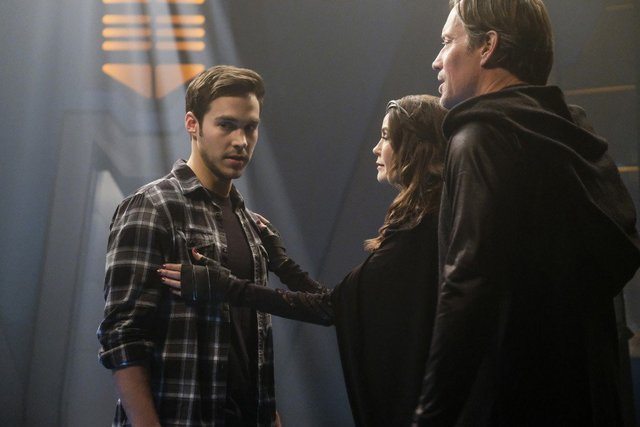 Just after Mon-El stayed behind to be the annoying stalker boyfriend that won’t go away, a new prisoner arrived. This was instantly suspicious since J’onn doesn’t make these grand proclamations when they bring in a new arrival. Sure enough, he starts hypnotizing Supergirl and opens a portal.

Kara awakens to find she’s not in Kansas, Smallville or Gotham. She’s at a nightclub and it’s time for her big number on stage. Let’s see how this shapes up on The Flash for the special Duets crossover.