Free Comic Book Day is Saturday. I’m already scheming on all the action figures, trade paperbacks and comics I’m grabbing. Since I’m heading up to my favorite shop, I hit up my buddy Steve Anderson, the owner of Third Eye Comics to talk about the big extravaganza and Third Eye’s upcoming big events.

What makes FCBD such a big event at Third Eye?

It’s our birthday. :) We opened Third Eye on FCBD 2008, and every year, our loyal and awesome customers make us push harder to really do it up! 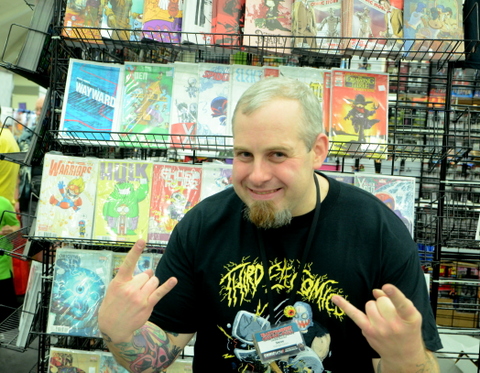 What would you say to someone who’s never been to FCBD about why they should go?

If you want the true magical experience of Free Comic Book Day – the cosplay, the excitement, and hey, the big sales — ours always delivers! Most importantly if you’ve never been in a comic shop, or it’s been a long time – our entire team is dedicated to help you find your 1st (or 1st in a while) favorite comic!

Which comics do you definitely recommend people checking out now?

THE BUTTON from DC Comics is fantastic. All the X-MEN revival books, like X-MEN GOLD, X-MEN BLUE, etc. are also very good. And, Image Comics as a whole puts out tons of quality reading!

This celebration isn’t limited to the comics shop. What’s going on over at the game wing?

We’ll be having sales on all of our games, as well as offering the FCBD Heroclix! :)

Once FCBD wraps up where else can people catch the Third Eye crew? Going to any cons?

After FCBD what comic celebrities are next up on the schedule?

The only thing announced right now is the band GWAR, who’ll be signing their upcoming new comic GWAR ORGASMAGEDDON #1 at Third Eye! But, trust me: there’s a ton of good stuff on the way!

You’ve been teasing a big announcement for Third Eye. Can you give a little more info?

We’ve got a GIANT announcement we’ll be making the night before FCBD. We’ll be doing it shortly after 9PM to everyone camping out in line, and will be live-streaming it via FACEBOOK (http://www.facebook.com/thirdeyecomics) then as well.

It’s quite possibly the biggest thing we’ve done yet — that’s all I can say. :)

Big thanks to Steve for the interview. I’m going to be partnering up with Steve on some giveaways for movies in the District, Maryland and Virginia area especially upcoming comic book films like Wonder Woman, Spider-Man: Homecoming and more so stay tuned.