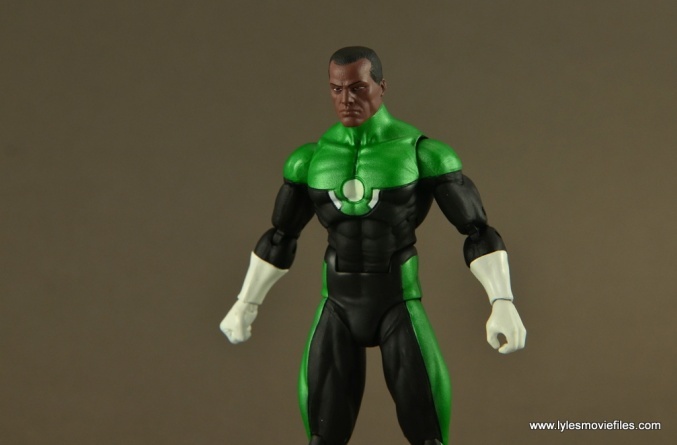 Everyone has a favorite Green Lantern. While I’m sure Hal Jordan and Kyle Rayner has their devoted fan base, I bet John Stewart wouldn’t fare too badly in the popularity contest thanks to his role on the awesome Justice League cartoon.

While it was a surprise to get a second Green Lantern before Wonder Woman, John Stewart is definitely a DC Icon and worthy of inclusion in the line. John represents the first alternate hero in DC Collectibles’ Icons line. Maybe there’s still a chance of Wally West, Guy Gardner and Jay Garrick getting figures in the Icons line, it’s looking less likely. Let’s see how he turned out.

Which hero will unite the seven in the Justice League movie?

Packaging:  The Icons line has probably the least flashiest packaging in the 6” format. The clean white with the respective accent colors gives it a classy, understated look. I’d still like to see anything closely resembling a bio with this line, but it’s more understandable since this isn’t a mass retail line. Comic book fans know exactly who John Stewart is and don’t need to be sold on buying his figure. 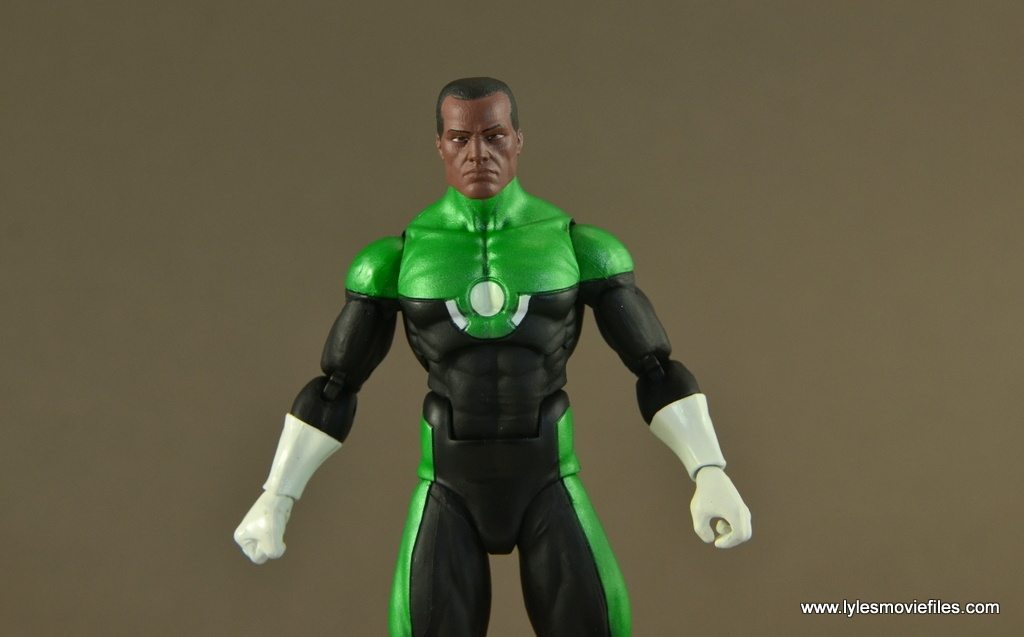 Likeness:  DCC has been inconsistent in nailing iconic looks of the characters. While some like Black Adam, The Flash and Harley Quinn are terrific, others like Superman don’t fully measure up. Thankfully that’s not the case with John Stewart.

Most of the credit here goes to that fantastic head sculpt. As a military vet, John is typically portrayed as matter-of-fact and all about taking care of business. That’s definitely reflected in this stern, no-nonsense sculpt. 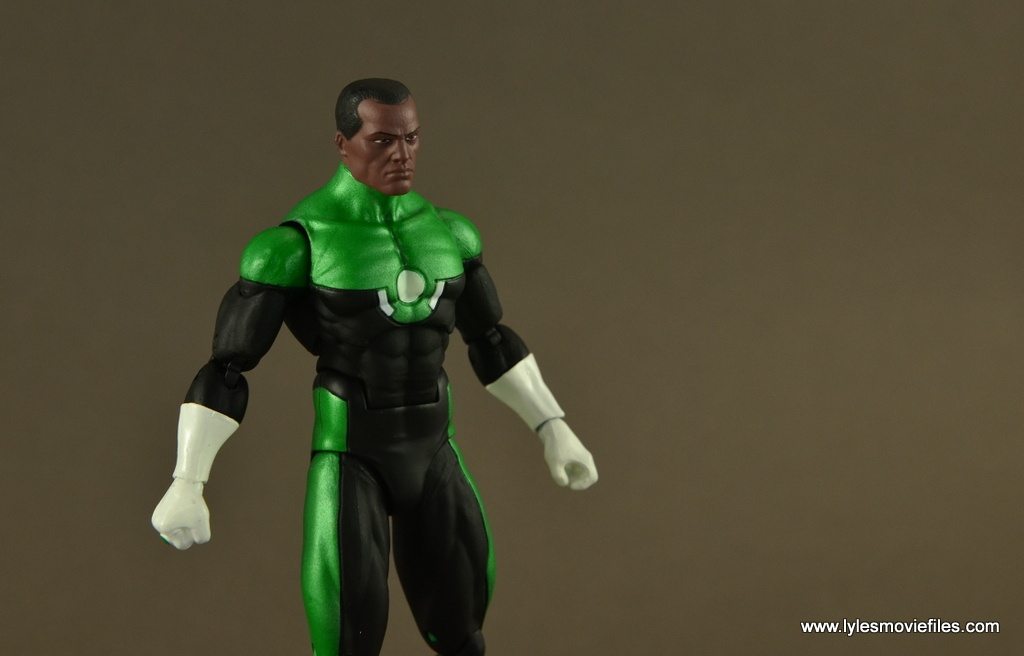 John isn’t a simple repaint of the Icons Series 2 Hal Jordan. DCC continues its impressive run of dedicated sculpts for each figure in the Icons line. With John, that means his GL uniform has sculpted lines along the chest, shoulders and legs. For all the complaints this line gets, DCC isn’t getting enough credit for not just slapping a new head on the same blank body. 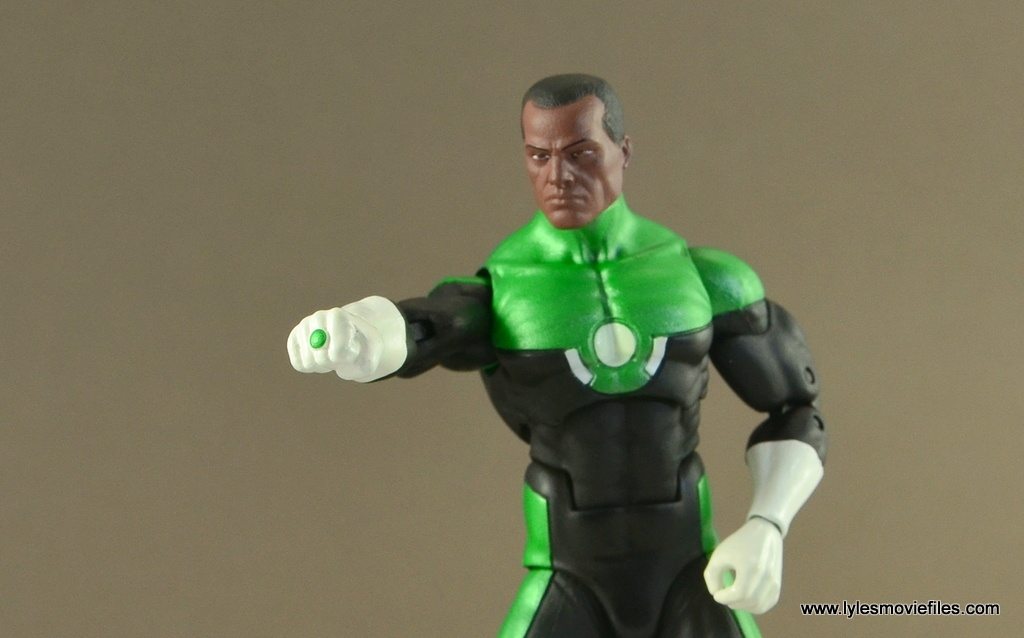 It is a little disappointing that the ring detail isn’t sculpted and is just a circle on John’s hand. That’s a surprising omission and a shortcut DCC shouldn’t have taken. 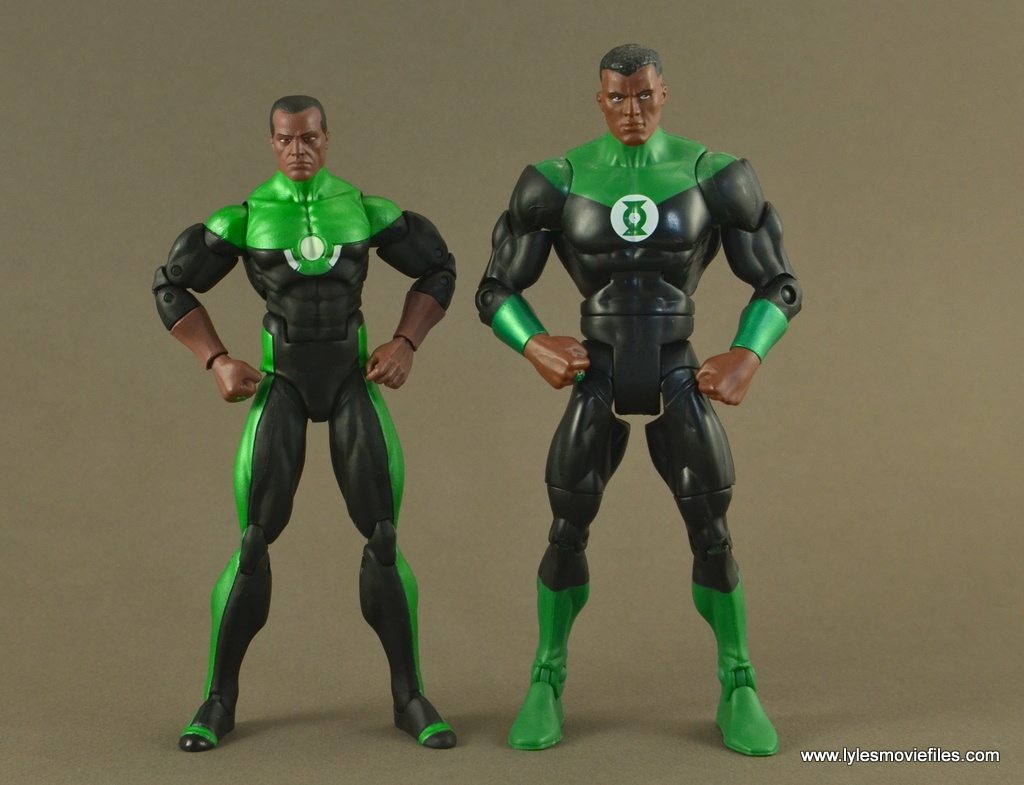 Scale:  Like his wave mate Firestorm, John is slightly scaled up from earlier waves. He’s not that much taller than Hal Jordan and is about the same height as Superman. The Icons Superman is too small so John seems scaled just fine. 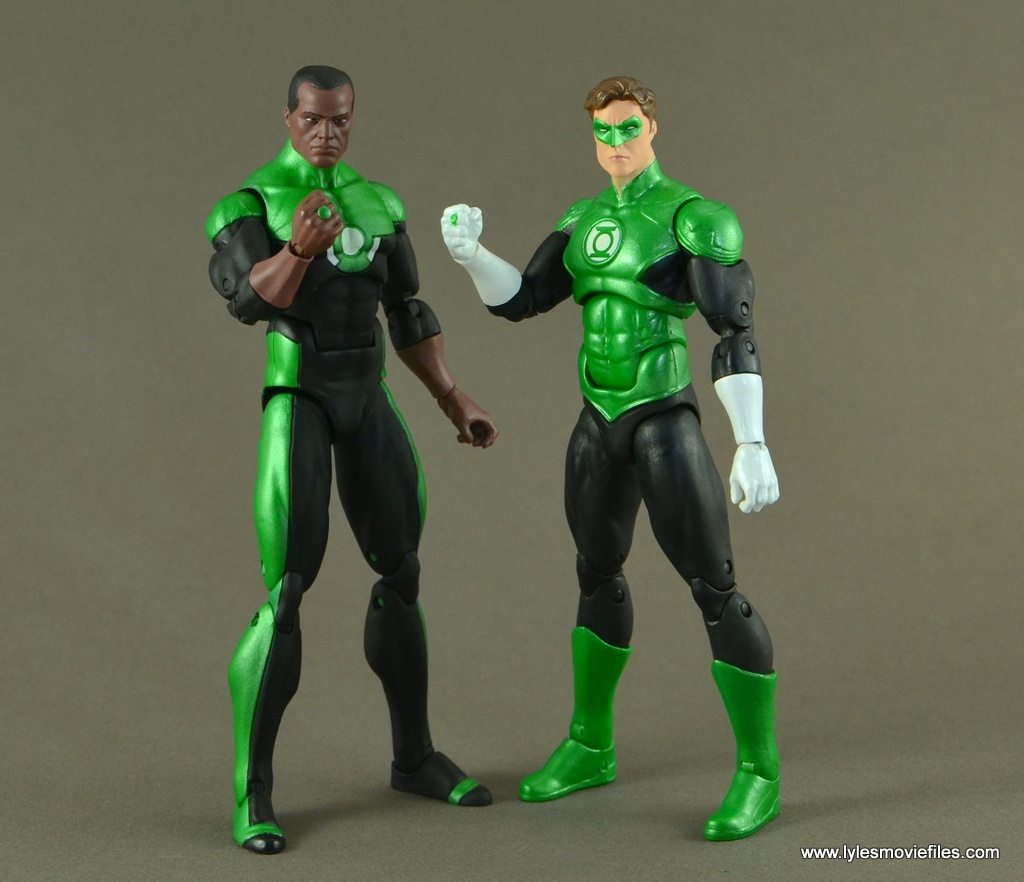 Paint:  DC Collectibles has been very consistent on this front. John doesn’t break that streak either. DCC used a nice metallic green for the outfit and the linework is terrific. No slops or oversprays here. John has a consistent brown skin tone and his hairline is solid as well.

Articulation:  The common complaint of the Icons line is the lack of waist articulation and restricted up and down neck movement. The latter is especially annoying for flying characters like John. He’s stiffer than some of the other figures I have particularly in the mid-torso, but he otherwise has fluid articulation. 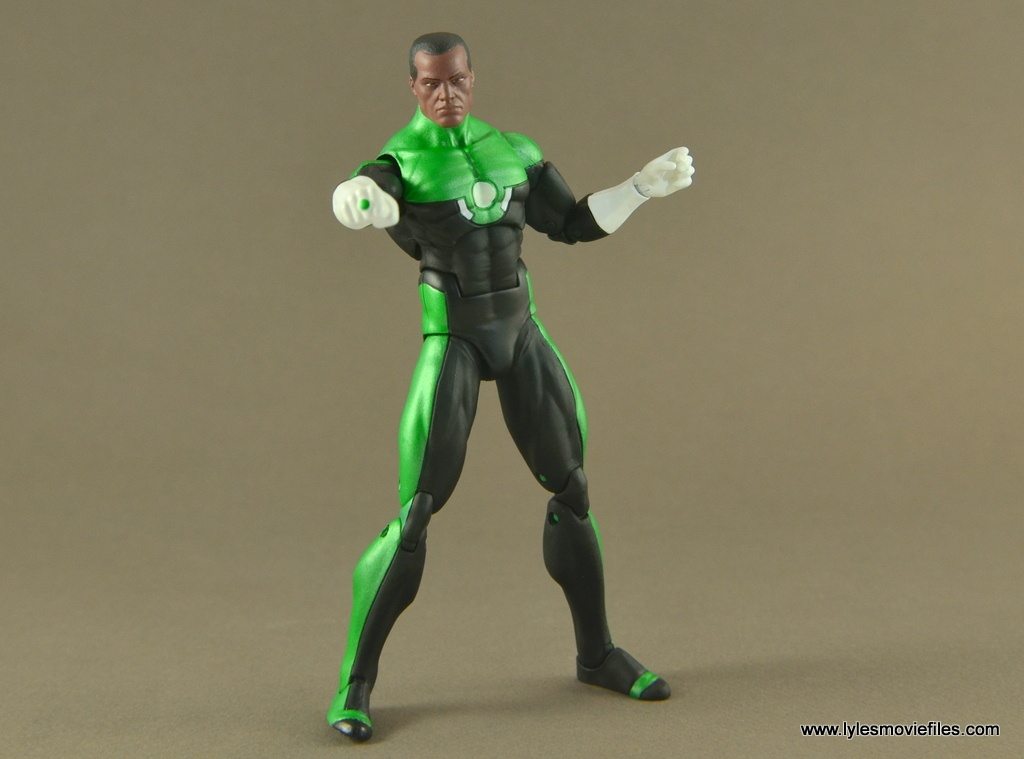 Accessories:  John is loaded. He has an additional set of bare forearms to reflect his Mosaic appearance. My favorite accessory though is a separate ring fist, which allows you to attach his ring constructs. 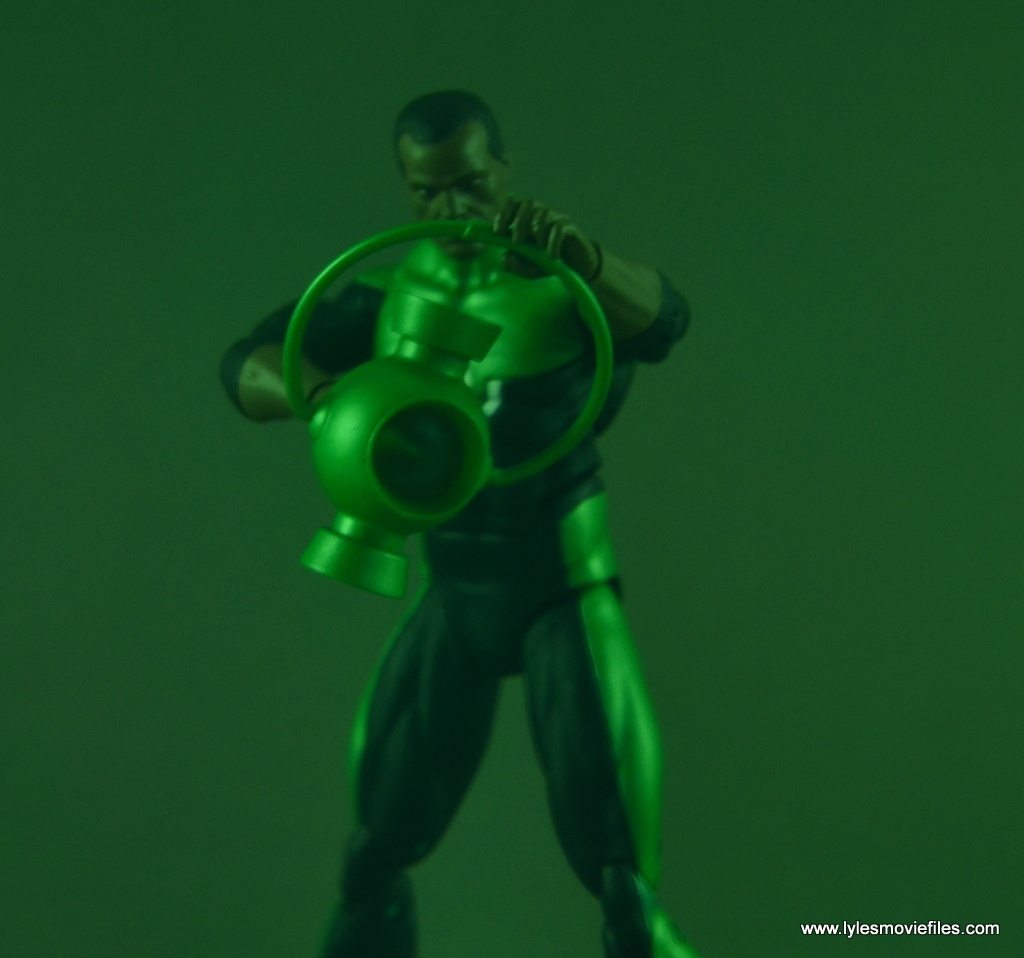 John’s aren’t too over the top. He’s got a ring flare, energy burst and ring burst effect. As well as his trusty lantern. All the pieces plug in and not fine. DCC looks to have fixed the fragile accessories issue that plagued the line early on. 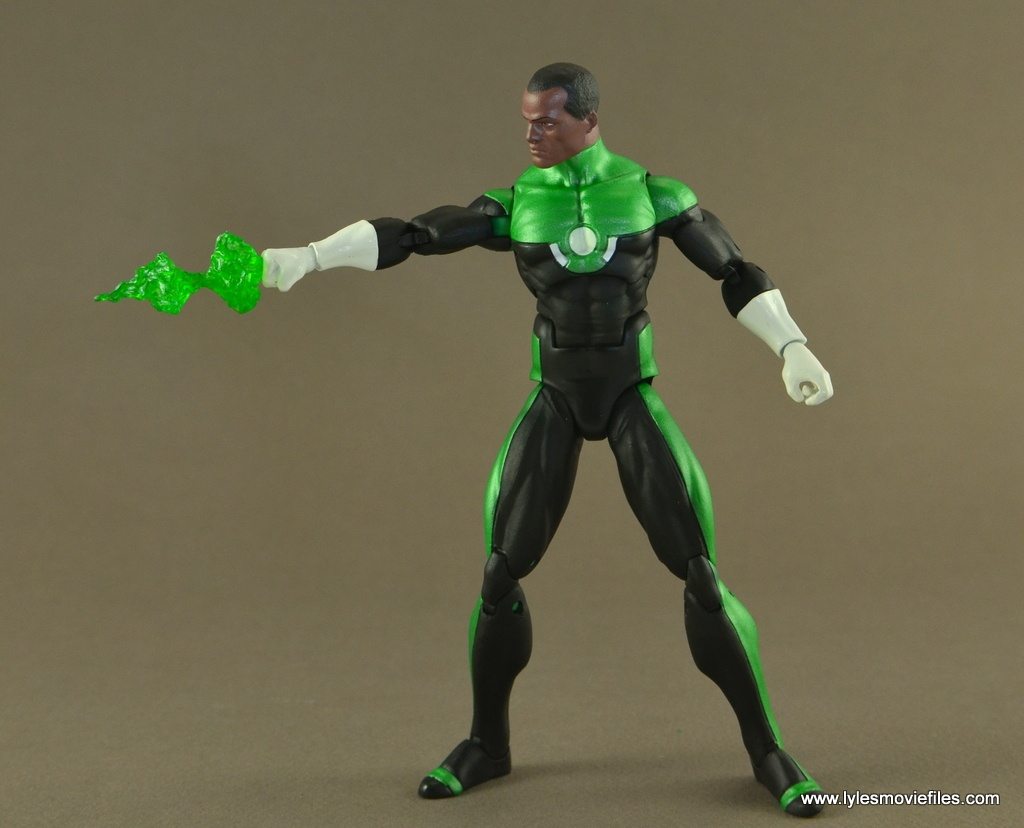 Worth it?  You can grab John Stewart now for just over $22. While that’s more for a smaller figure that doesn’t come with a Build-A-Figure part, the cost balances out with the dedicated sculpt and plentiful accessories.

DCC did right by John and Green Lantern fans with a solid and worthwhile addition to the DC Icons line. 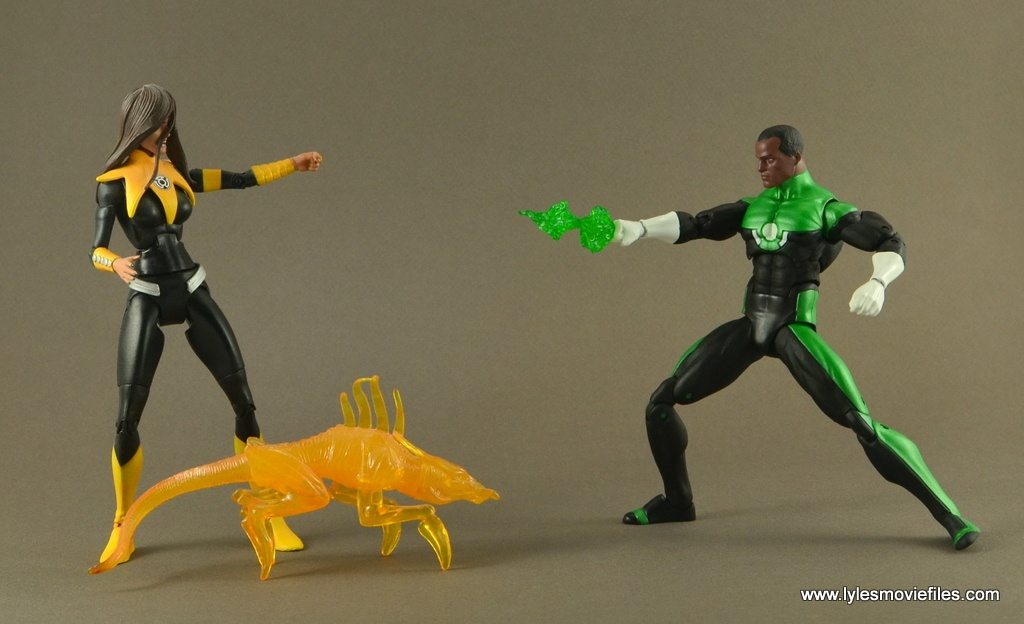 Where to get it?  I’ll always recommend buying these from your Local Comic Book Store first. That’s where I grabbed John. If there’s none in your area, start off with Amazon or try Entertainment Earth. 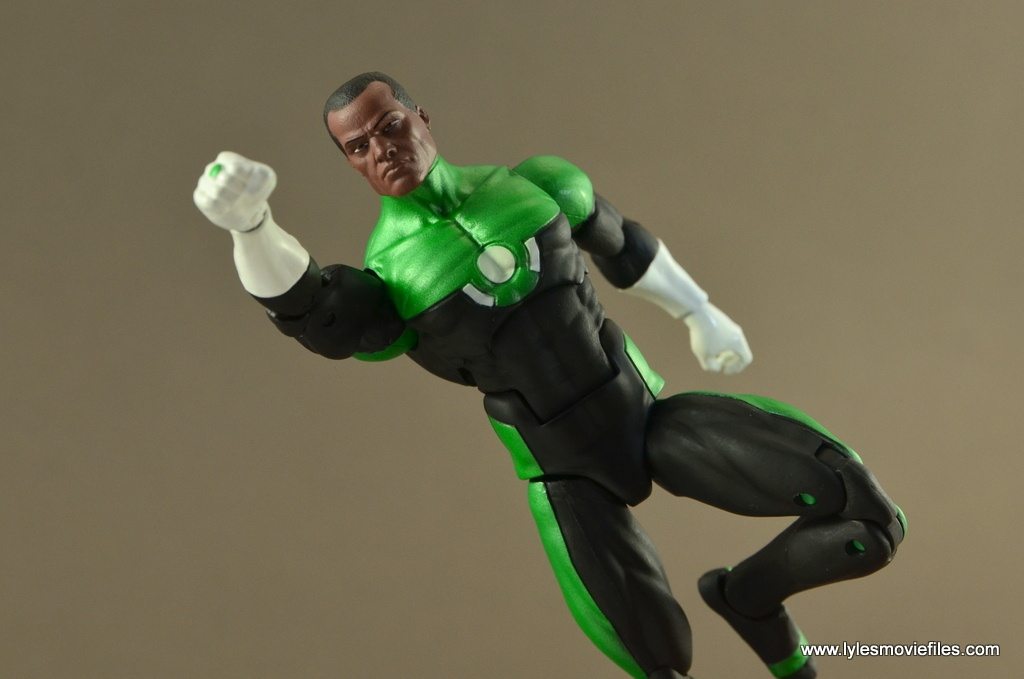