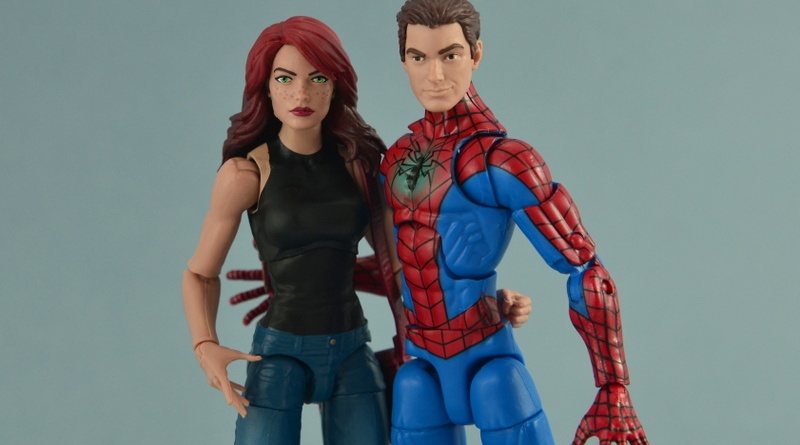 We rarely get anything new in my area. Or at least as soon as everyone else. So when I started seeing reports of the Marvel Legends Spider-Man and Mary Jane Watson set, I figured it’d be about a month before I saw them on shelves. Turns out I just needed a couple days. Finding an unexpected new arrival on shelf is always a thrill and even more so when it’s for a quality set like this one.

Packaging:  Nothing too fancy here. It’s the standard two-pack setup. MJ and the unmasked Peter Parker get the side panel treatment and a streamlined bio explains their connection. It was a little weird that the bio frames MJ more like the Ultimate Spider-Man version, since this is clearly the adult version MJ. 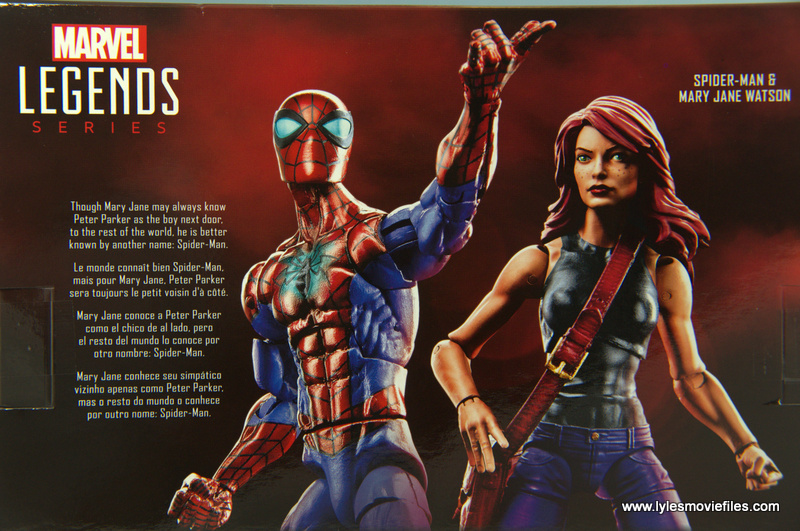 As usual, the wide open window shows all the accessories and a clear view of the figures making it easy to pick out the best version. 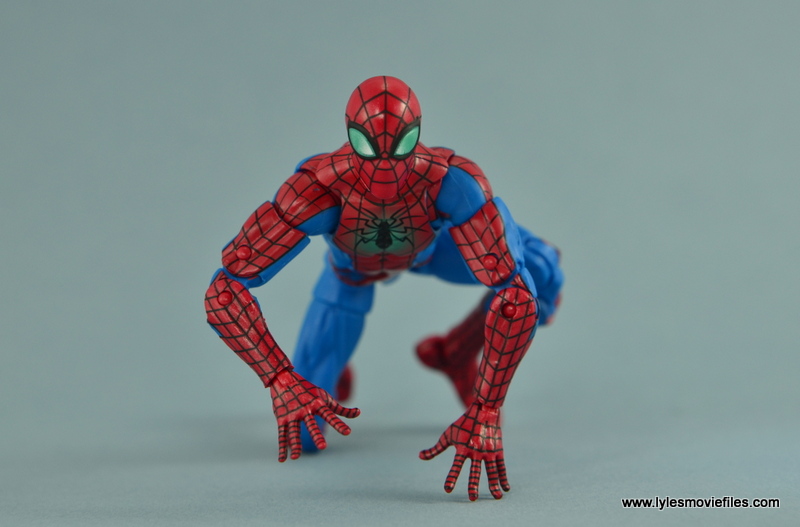 Likeness:  In this Golden Age of Marvel Legend collecting, my sole beef if costume choice. The flash in the pan costumes still take precedence over iconic looks that lasted for decades. But once that classic costume is done, I’m on board with the current outfits. The modern day fans don’t need to wait decades for their favorite costume made into a figure either.

This set’s Spider-Man is based off his current comic look with the tech upgrades. Of the various Spidey variant outfits, I like this one a lot. It retains a lot of the classic feel with some minor alterations like the glowing logo. Hasbro used the Superior Spider-Man head for the head, which helps differentiate it from the classic version on the Pizza Spidey/Raft figures. 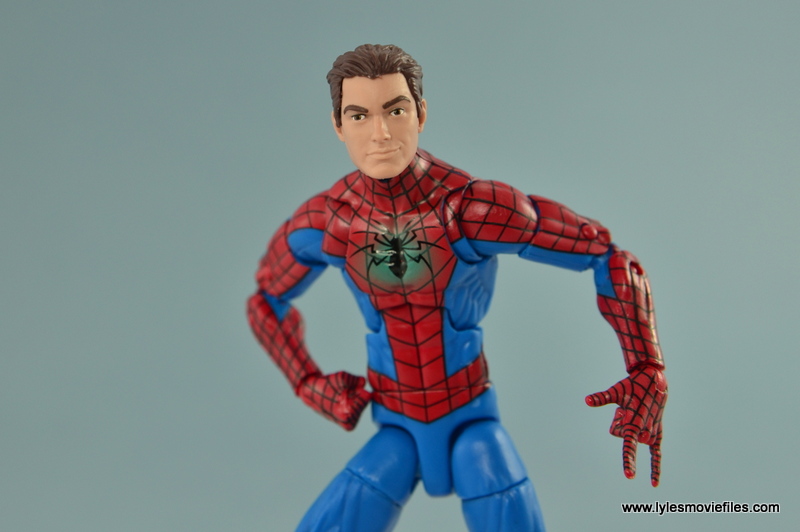 I like the Peter head sculpt. It’s got a pleasant and inviting expression without being scene specific. This works great for a civilian Peter Parker if you have a suit body handy.

Mary Jane is pretty simple. She’s wearing a signature MJ tank top and jeans. There’s nice detailing here, but it’s not exactly the most complex outfit. That’s a good thing as it allows MJ to be more versatile in display settings. Hasbro opted for a more timeless take on MJ meaning no bangs and more modern hairstyle. 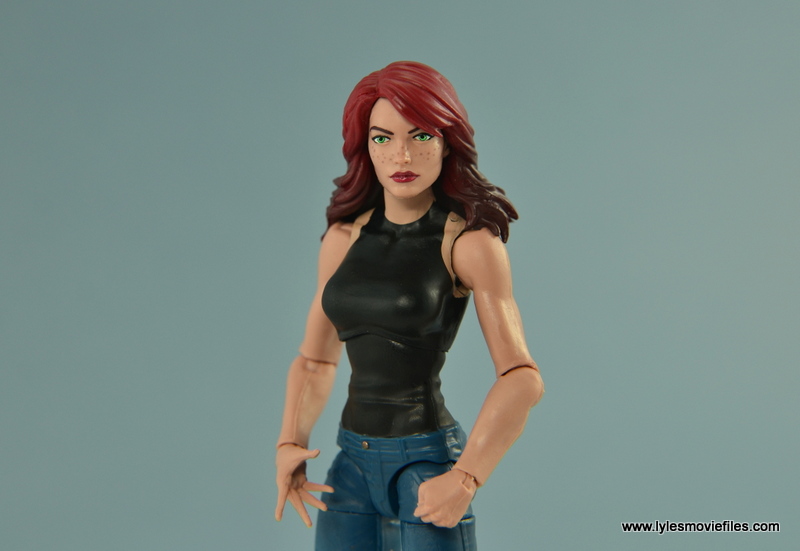 The head sculpt is another winner. Whoever is sculpting these recent string of female faces deserves a raise. I’m getting a bit of an Emma Stone vibe from the sculpt, which I like. It inspired me to get one shot from my favorite movie last year. 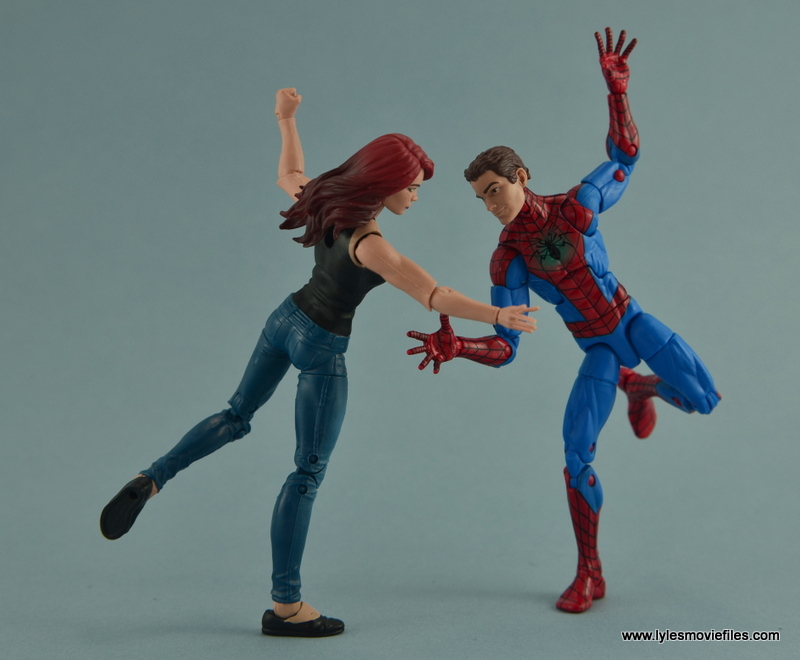 Scale:  The Pizza Spidey body is lanky and wiry, capturing Peter’s look nicely. He’s an adult now, but not chiseled stone like Captain America or an athletic regular guy like Daredevil. MJ is right around the same height as other females, which makes sense as Mary Jane was a fashion model and they’re not typically short.

Paint:  I was fortunate enough to catch a freshly opened case and had the luxury of looking through 4-5 sets for the best paint job. Peter had the most inconsistent paint jobs, typically around the eyebrows and the logo. 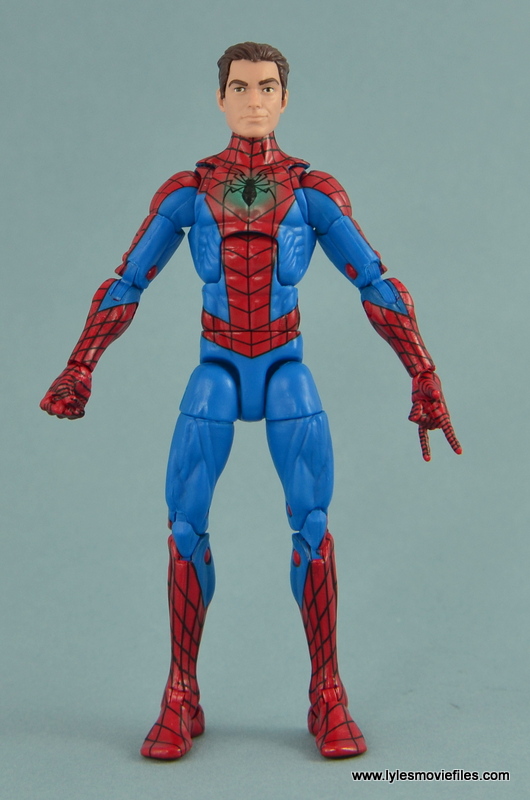 Only one of the various sets had a Mary Jane with sketchy eye paint work. That’s mostly just from being in position to be picky. Save one, I wouldn’t have complained about the others being the last on the shelf when I found it.

I really like the glow effect on the eyes and logo. Hasbro used a shimmery like paint effect to convey the glow. It’s not overbearing and smartly utilized. The red and blue transitions and webbing are solid as well. 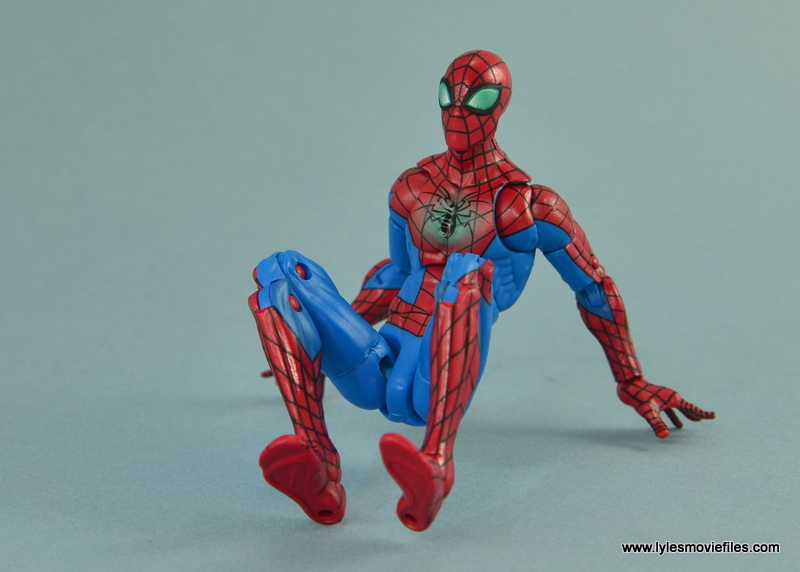 Be mindful for Peter’s eyebrows, the logo paintwork and MJ’s eyes. I wish Hasbro would match up the joint colors with the appropriate sections. It always looks bad to have red joint pieces on otherwise blue costume areas. The line work on Spider-Man head’s right eye slot wasn’t lined up properly, but at least it’s done consistently. 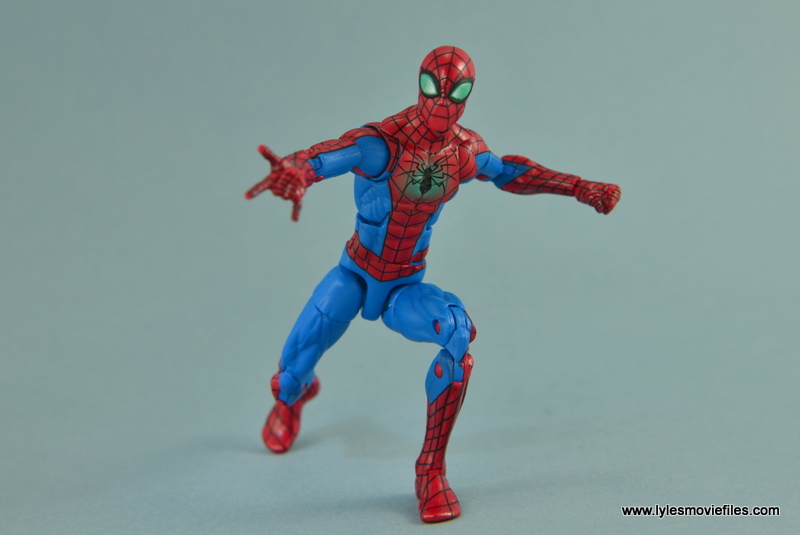 Articulation:  The Pizza Spidey mold is so much fun to pose. There’s so many posing possibilities with it and the body is engineered to have great balance. Spidey has a nice steady base even if he’s on one foot. The only drawback to the body is the limited hip range. Spider-Man should be able to hit more effective splits, but that’s the only weak point in the articulation. 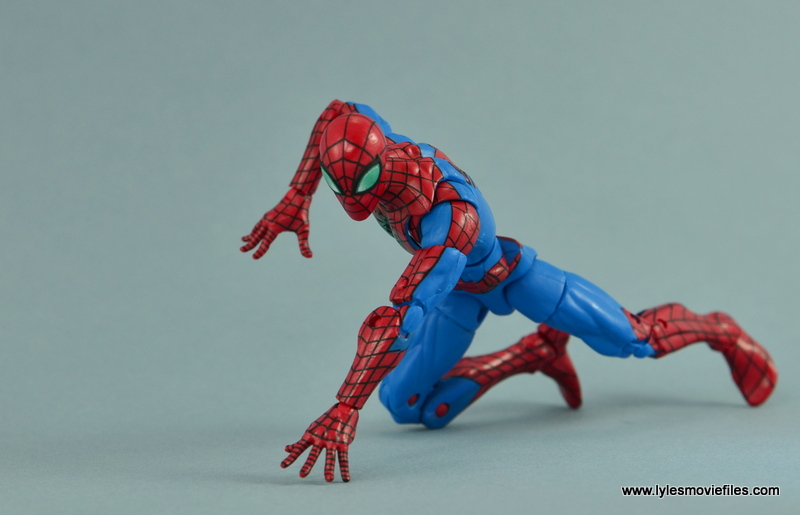 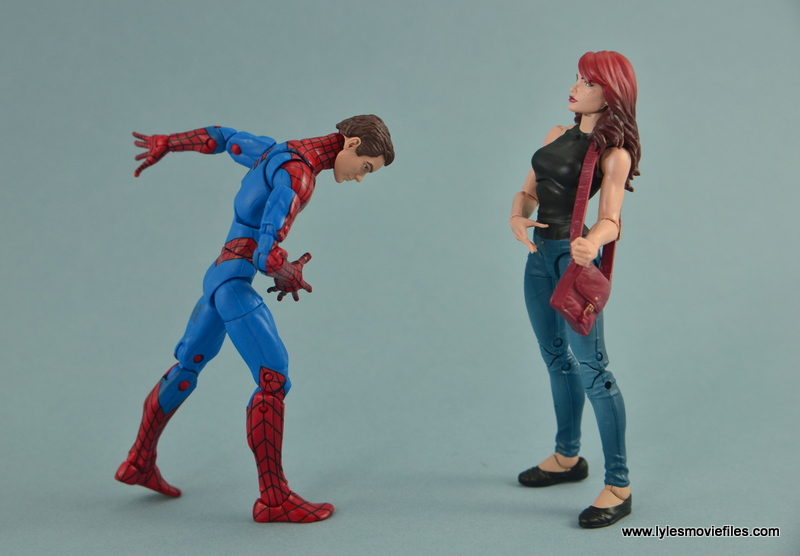 Mary Jane actually has better hip range, but as you’d expect, her hair restricts some of her side to side and back and forth neck movement. Otherwise, she’s a fairly standard ML female, which is fine for a civilian character that won’t be fighting a bunch of super villains. 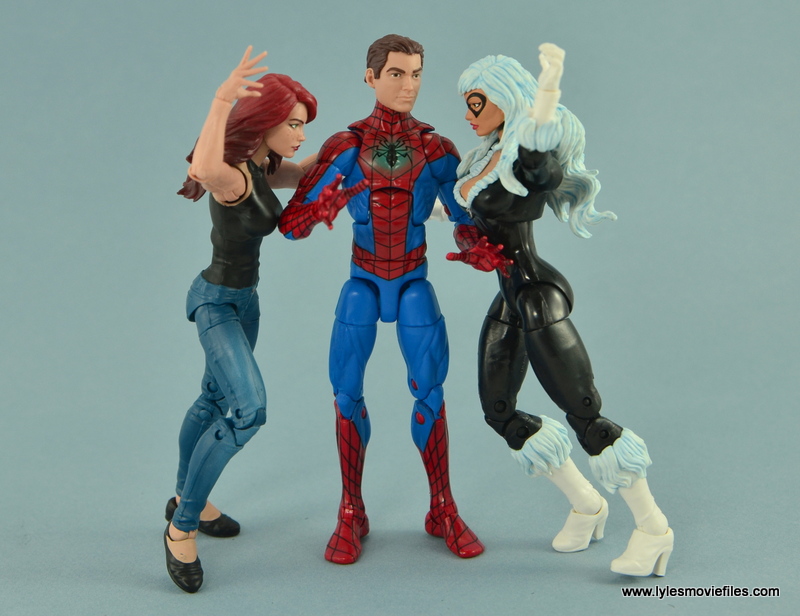 Accessories:  While there’s no Build-A-Figure here, there’s a reasonable set of extras. Spider-Man comes with the three useful pairs of hands — web shooting, crawling and punching. And of course the Peter Parker head. All of these parts plug in and out easily and stay in securely. I didn’t have any problems with parts falling off while posing him.

MJ comes with a purse. This is re-purposed from the Green Goblin and Hobgoblin, just make sure not to call theirs man purses. The purse works fine in a cross shoulder or over one shoulder position thanks to the hair. That’s really the only necessary accessory here, but an alternate more John Romita style head sculpt would have been amazing. 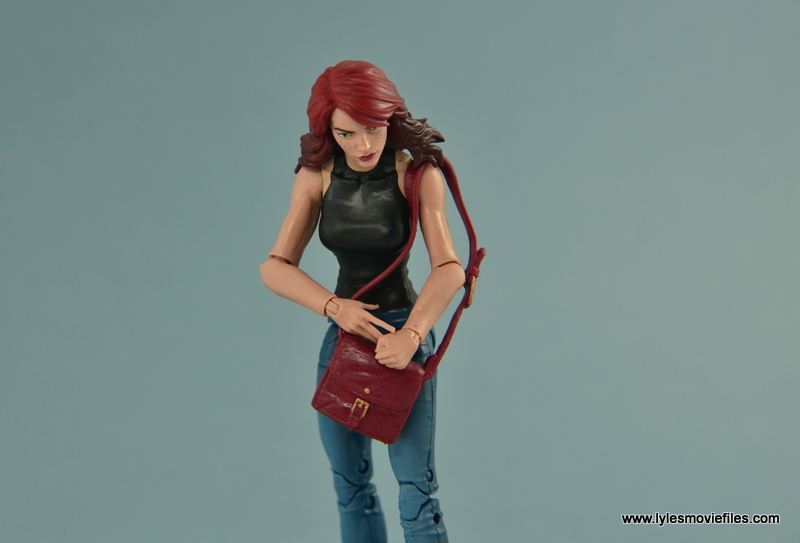 Worth it?  The set is going for $40. That’s the normal Marvel Legends price, but considering the lack of a Build-A-Figure parts and part reuse, there should be some discount. Just $5 cheaper would be a sweet spot price point. 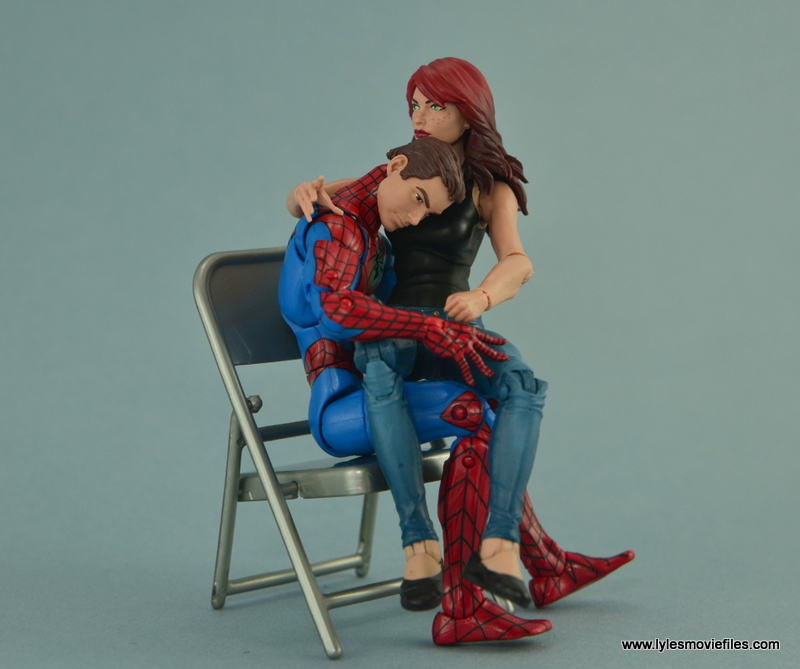 I wasn’t expecting to like this set as much as I did. I was primarily interested in Mary Jane, but the Spider-Man was a terrific surprise. 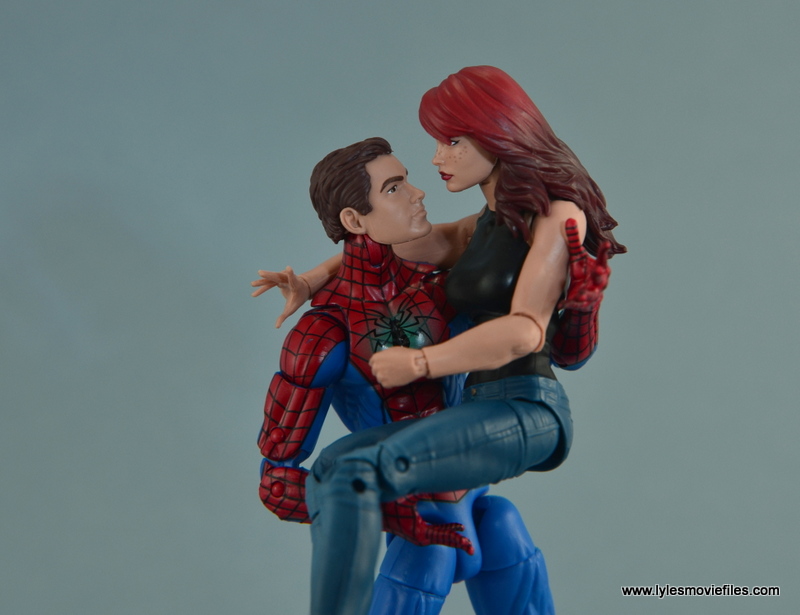 Where to get it?  Right now you can find the set in store at Toys R Us and on Toys R Us.com. Amazon.com also has it, but at inflated secondary prices.