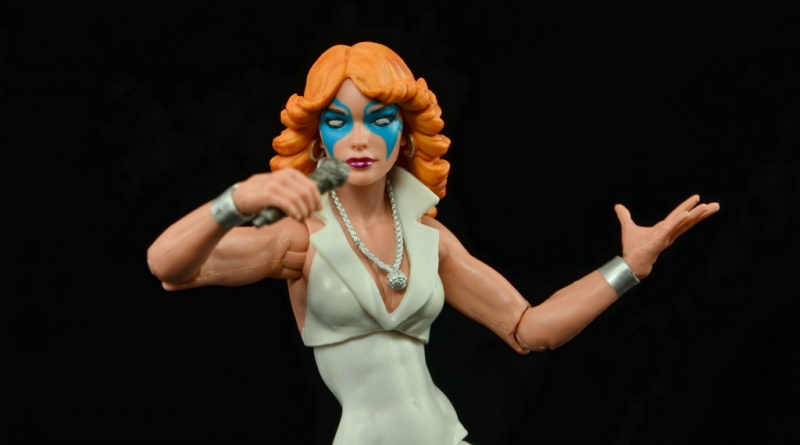 My first choice for a Marvel Legends Dazzler figure? Easy. The blue spandex attire she rocked during her X-Men Outback phase. That was also her look in Pride of the X-Men and the iconic arcade game so there’s a lot of sentimentality in that costume.

But, I’m fine with Hasbro’s choice of the Disco Dazzler look and that’s 100% due to this was how she looked during her Dark Phoenix cameo. Since the Dark Phoenix saga is my all-time favorite X-Men story, I’d happily take figures of every character involved from The Hellfire Club to the Imperial Guard.

Packaging:  Like the Guardians of the Galaxy packaging, the X-Men line gets a color that’s not as commonly used. The gold accents were a nice choice for the X-Men and it really helps the line stand out from the reds and blues on other lines.

I really like how Dazzler is posed here. I can almost picture her in mid-skate before she starts singing again. That’s a small detail that really sells the figure presentation.

Dazzler has a nice Mike Deodato illustrated portrait on the side and a dedicated bio on the back. The bio nicely sums up her powers though it’s somewhat weird Hasbro doesn’t add the secret identities and group affiliations for the characters. 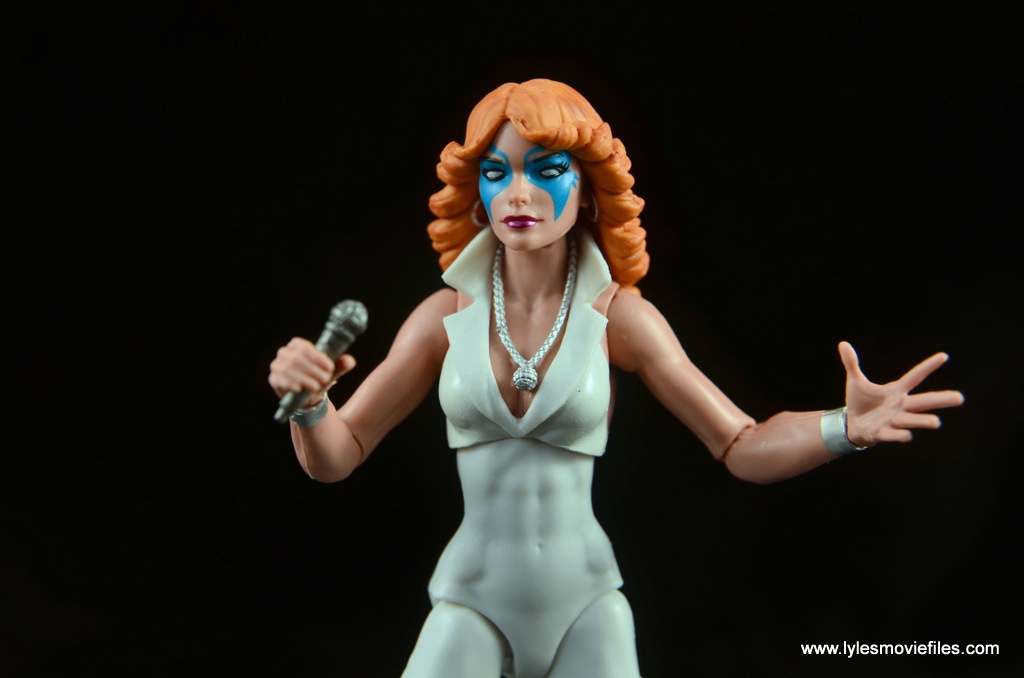 Likeness:  I remember from a few GI Joe comics, the clever ‘Mutant’ ads for Dazzler. They were eye catching and memorable enough that I was curious about her.

If Marvel Legends were around back in the late 70s, I’ve got a feeling this would still be everyone’s favorite. From the Farrah Fawcett hairstyle, popped-up collar, disco ball necklace right down to the flared pants and disco ball style roller skates, there is a ton of love put into this figure. Even if the Outback Dazzler was your preference, it’s hard not to appreciate the effort here. 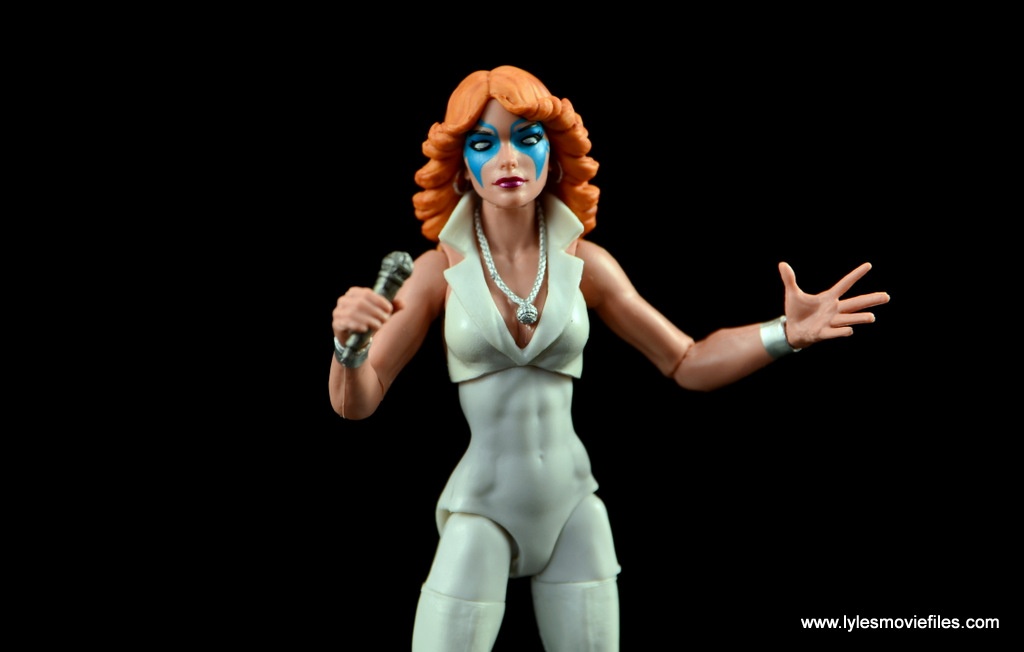 The hair is so well done it’s easy to overlook that Dazzler had a longer, flowing hairstyle back in her day. As has been the case since the Odinfather wave, Dazzler has a beautiful head sculpt. It’s hard to imagine this is the same line that once featured the sad Scarlet Mitch as a highly coveted figure. 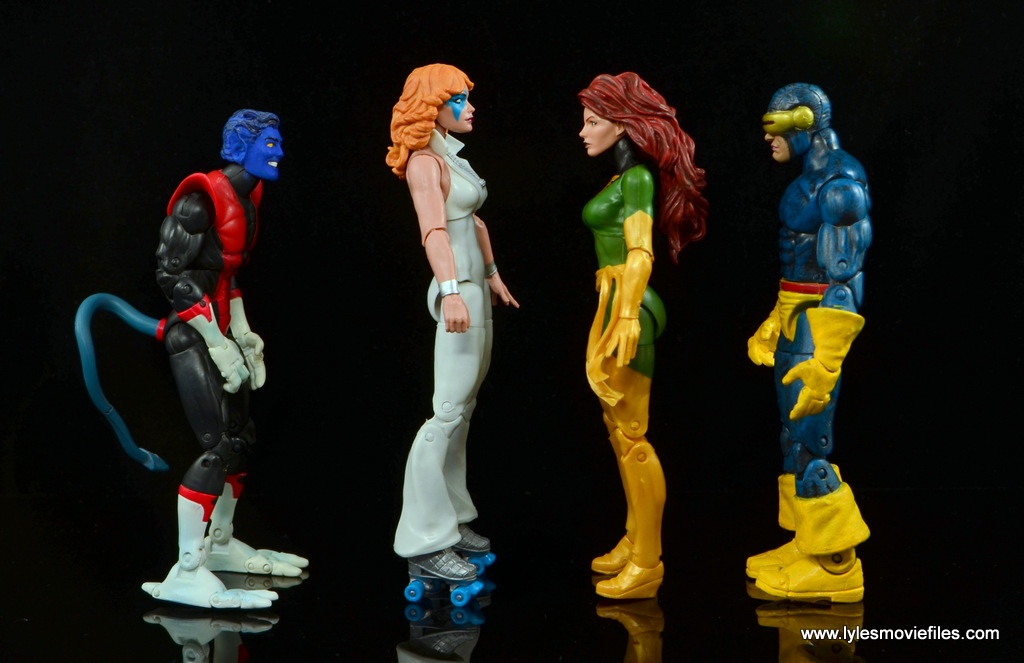 Scale:  Thanks to her trusty roller skates, Dazzler is going to stand taller than most average size figures. That’s the only reason I wish they were removable.  If I’m remembering correctly, even with the skates Dazzler wasn’t that tall. That’s the cost of a dedicated sculpt although being in scale would have earned her even more points with me.

Paint:  Dazzler doesn’t demand a lot of paint apps. The biggest is her eye shadow/makeup and the earrings you really have to look close to see.

The hair also has a slight wash, which helps add more depth to it. The white used for her outfit has a bit of a sheen to it to simulate the 70s-80s bodysuits. 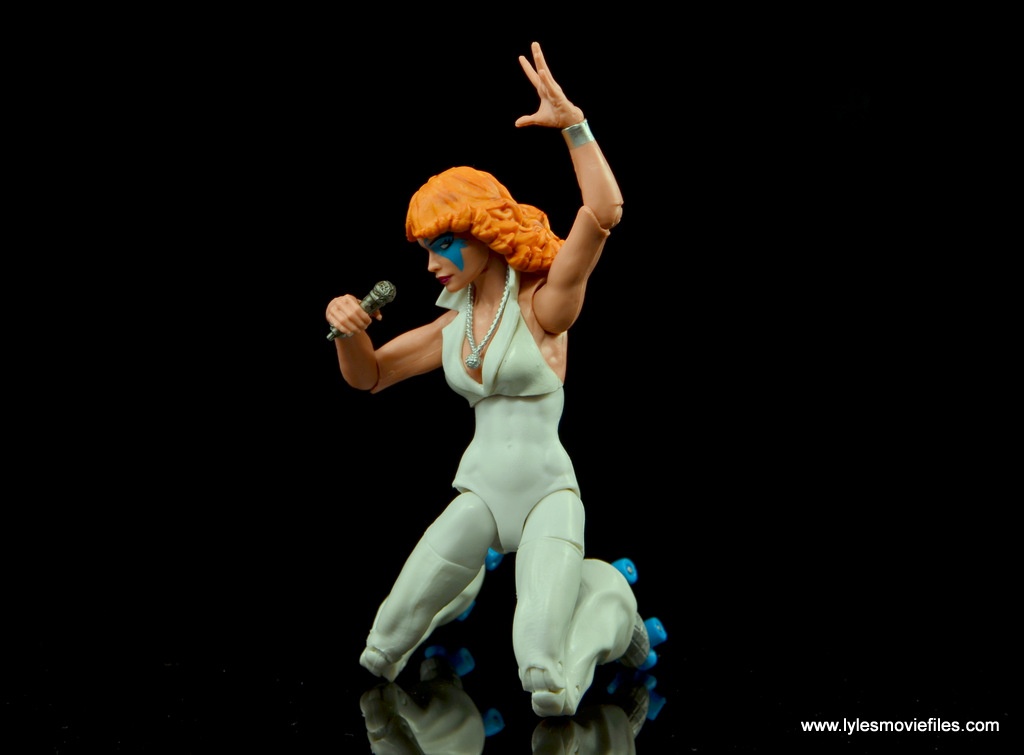 Articulation: Dazzler has a great range of movement even without the standard female omission parts of the biceps and waist articulation points. The skates mean you’ll need to be more deliberate in setting a pose, but once you found the sweet spot she’s no trouble at all in holding a pose. 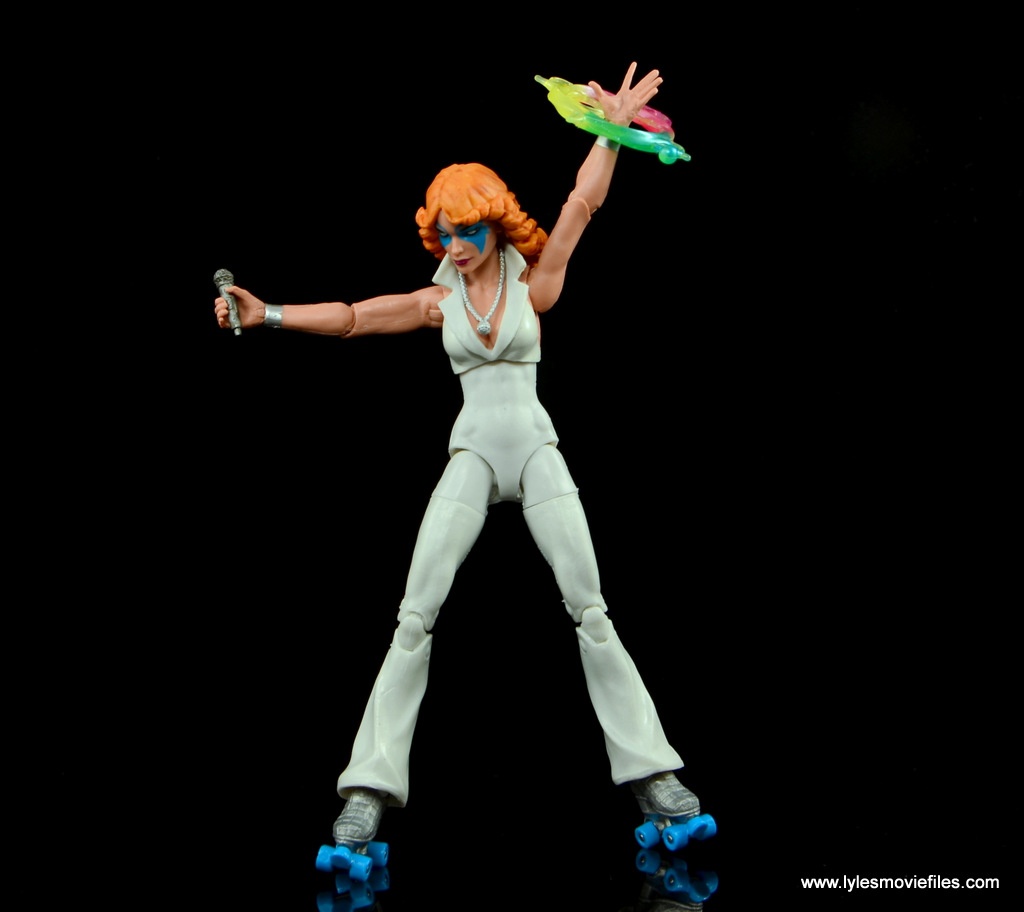 The hair is sculpted nicely to allow for better than average side to side movement giving Dazzler a leg up over most female figures. 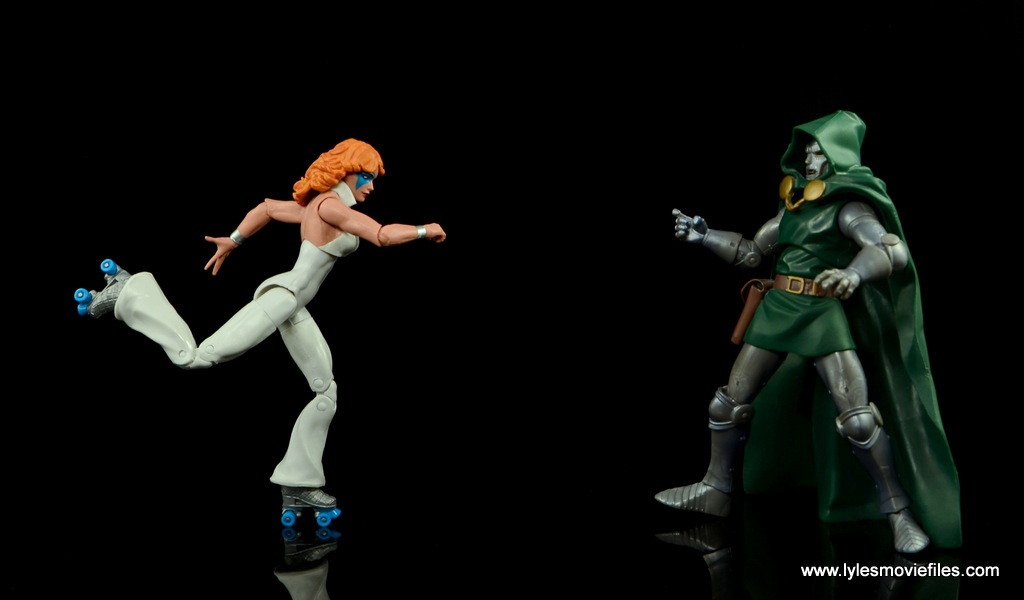 Accessories:  Dazzler gets a nicely scaled microphone and the overused effect clip. I’m hoping Hasbro adds another effect into the articulation mix just to break things up. Despite its overuse, the effect looks great here with several colors conveying her powers in a creative manner.

Additionally, she comes with the left arm to the Build A Figure Warlock. 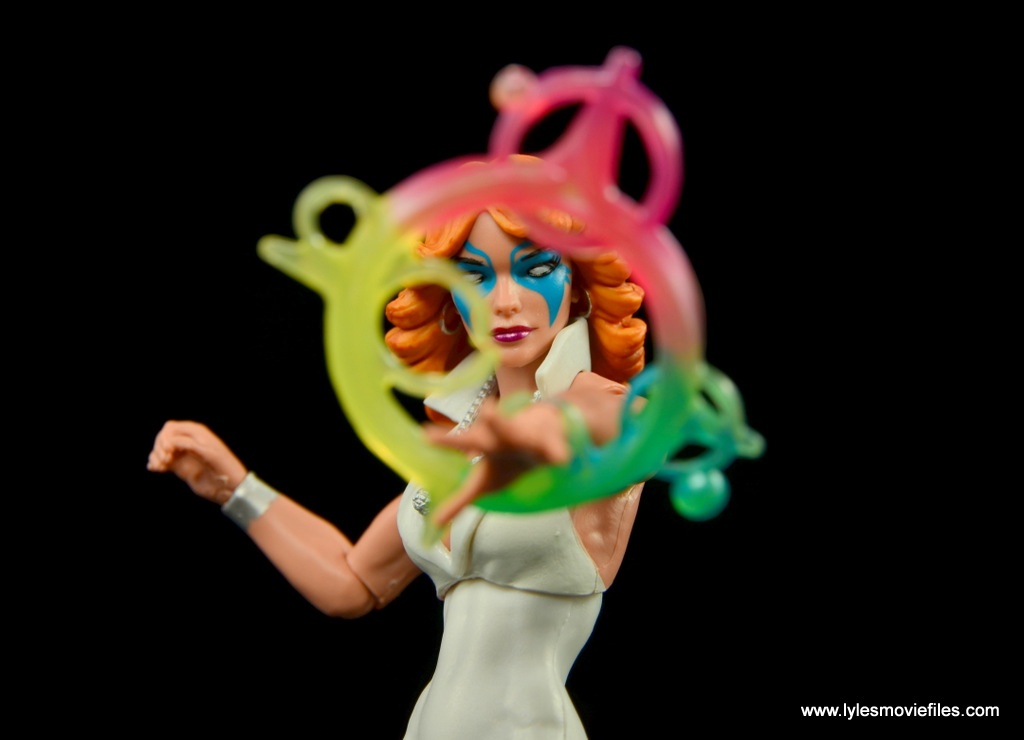 Worth it? I got Dazzler for $20. That’s the going Marvel Legends rate and I feel like I got my money’s worth here. Right now she’s available for $17 on Amazon. 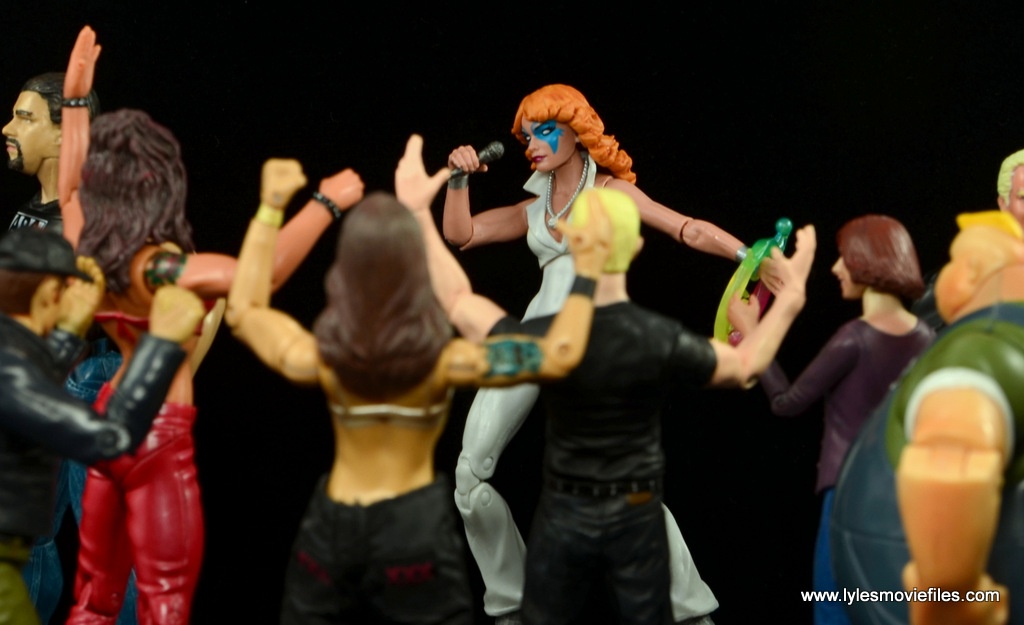 Dazzler clearly is right in the thick of things for best female figure for 2017. This is a high quality figure that’s a lot of fun and could likely be a conversation piece in your collection. 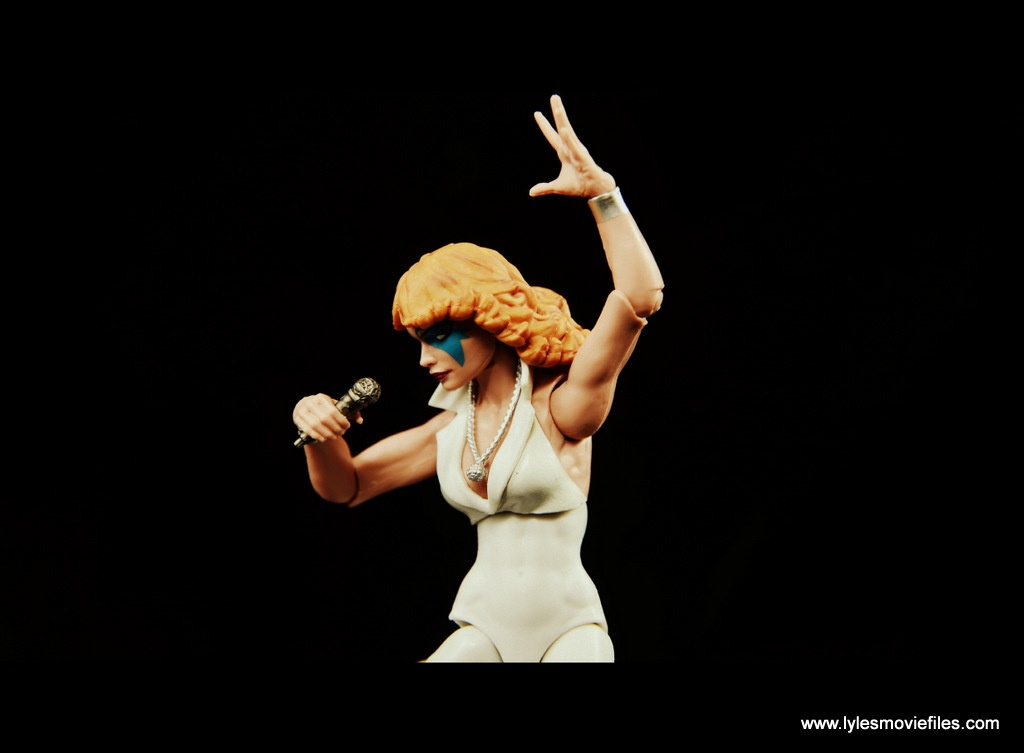 Where to get it? I grabbed her from Target, but Toys R Us and Wal-Mart has this wave in stock as well. Tired of searching? Order the full case from Entertainment Earth or just grab her from Amazon.