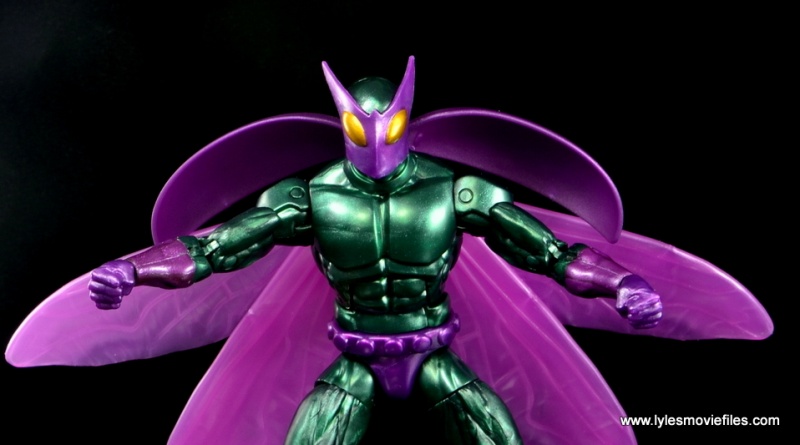 This has been a year of finally getting some long awaited characters from Marvel Legends. First it was Polaris, then Invisible Woman, Mary Jane, Cyclops and Dark Phoenix and now Beetle.

Beetle is a character Hasbro seemed determined to crank out every possible version. There was the Ultimate, the Janice Lincoln version and even Leila Davis‘ super armored version. Now we get the one that’s been most demanded by collectors. Did Hasbro save the best for last? Let’s find out.

I’ve gotta give it up to Hasbro for getting this Spider-Man: Homecoming theme wave out everywhere right in time for the film’s release. Hasbro continues to show the best way to work this current system where movies dominate everything related to comic books.

Packaging:  Ok, I admit I’m stumped in terms of coming up with something new to say about this packaging. We get a nice clear view of everything thanks to the clutter free window. 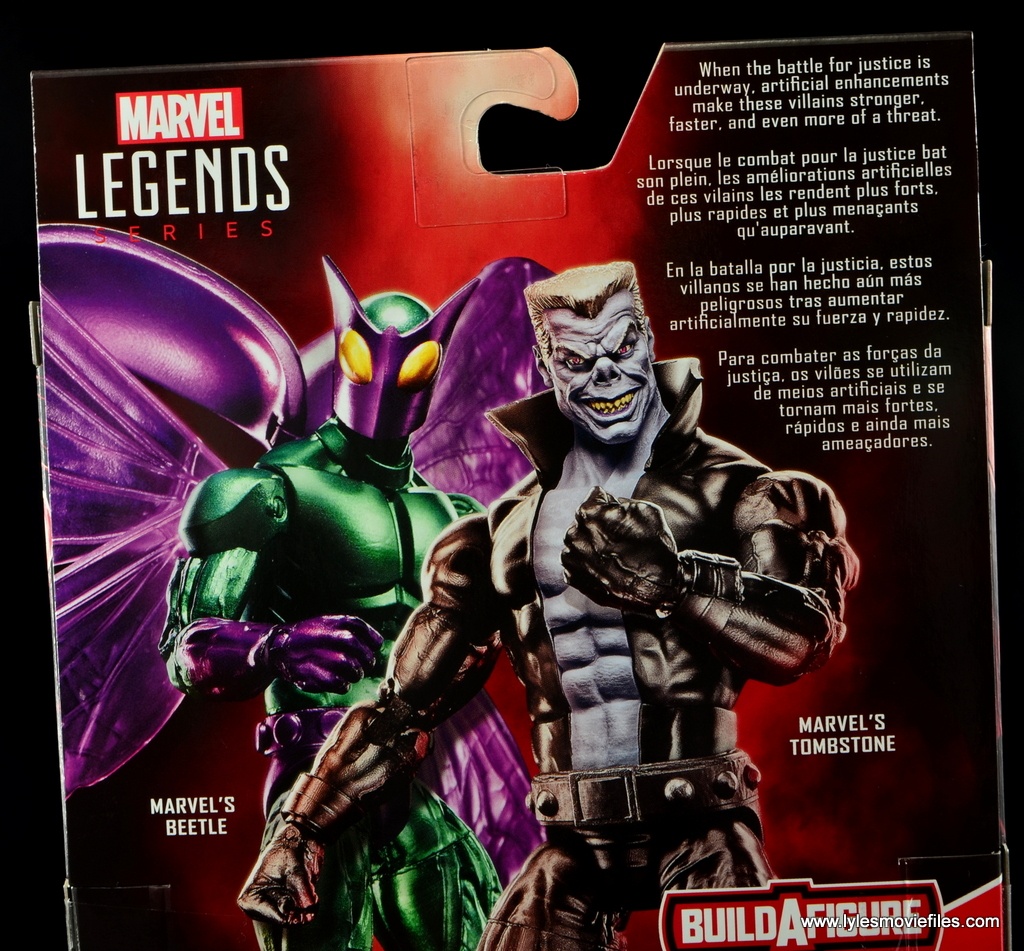 Beetle shares packaging with Tombstone so he’s only got one side portrait. I can’t place which artist is responsible for these, but I really like them.  Hasbro doesn’t need to change much beyond giving more information on the characters. The bio is even more generic than usual.

Likeness:  For all the grief Hasbro got with their other versions, every Beetle figure has come out very nice. Fortunately that trend isn’t broken here with Beetle. He gets a new torso capturing his armor plated look and rounded collar with the torso and shoulders. I appreciate Hasbro going the extra mile and not just relying on paint work for those unique costume elements. 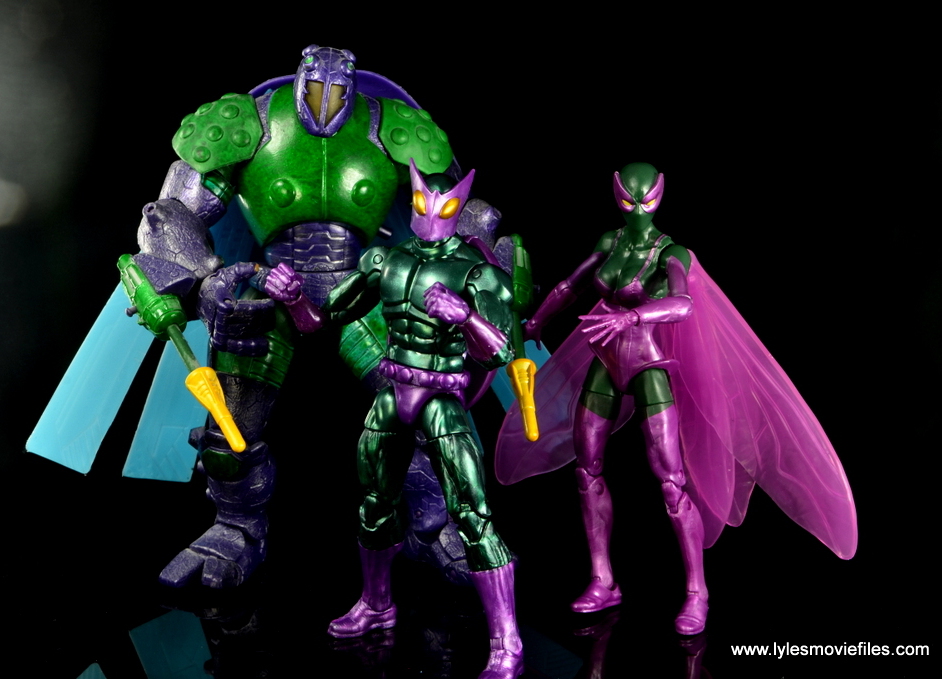 The helmet is the most iconic part of Beetle’s outfit and Hasbro did a great job with it. I appreciate the scaling as it looks like it would fit over a normal sized head.

Scale:  Beetle is just a regular guy in a suit of armor so he’s not average size just slightly shorter than Spider-Man. 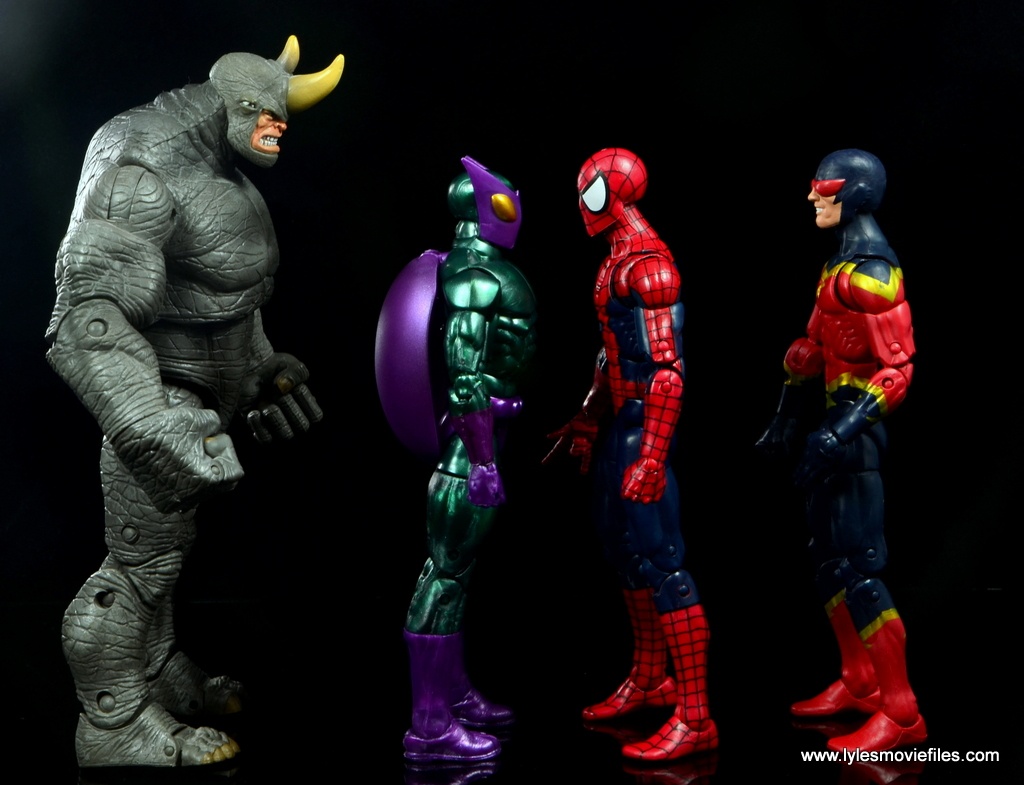 Paint:  I love whenever Hasbro uses the metallic paint. They don’t overdo it so it’s meaningful when it’s incorporated into characters. That helps give Beetle’s armor a terrific sheen. He may get trounced by every A-lister, but Beetle is going to look good heading into battle.

This is about as flawless a paint job as I’d expect from a mass market figure. There’s not the obvious bleeding of colors we typically see with more complicated costumes. The helmet is probably the most impressive with the perfectly done green to purple and yellow in the eyes. I always give Hasbro a certain threshold before I start deducting points for the paint. No need to here as Beetle breaks the curve. 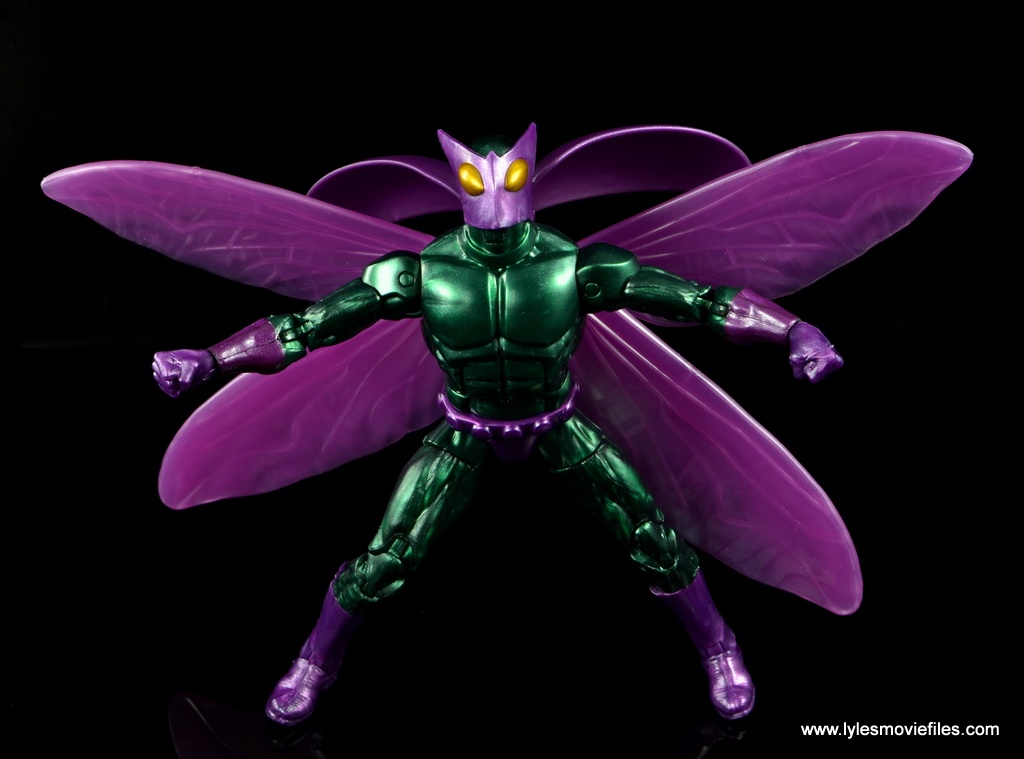 Articulation:  Like the packaging, there’s also no surprises here, but that’s a good thing. Beetle sports the standard Marvel Legends articulation package allowing for all kinds of fun poses. He’s a character you’ll probably want to get a flight stand for to better assist in the mid flight poses. 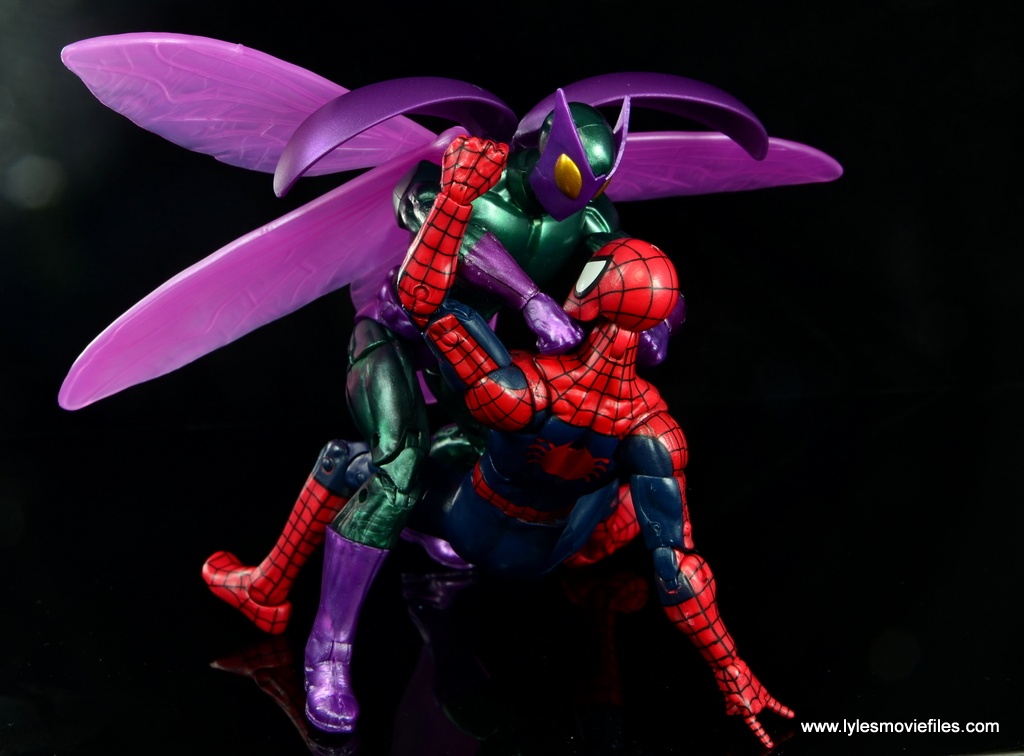 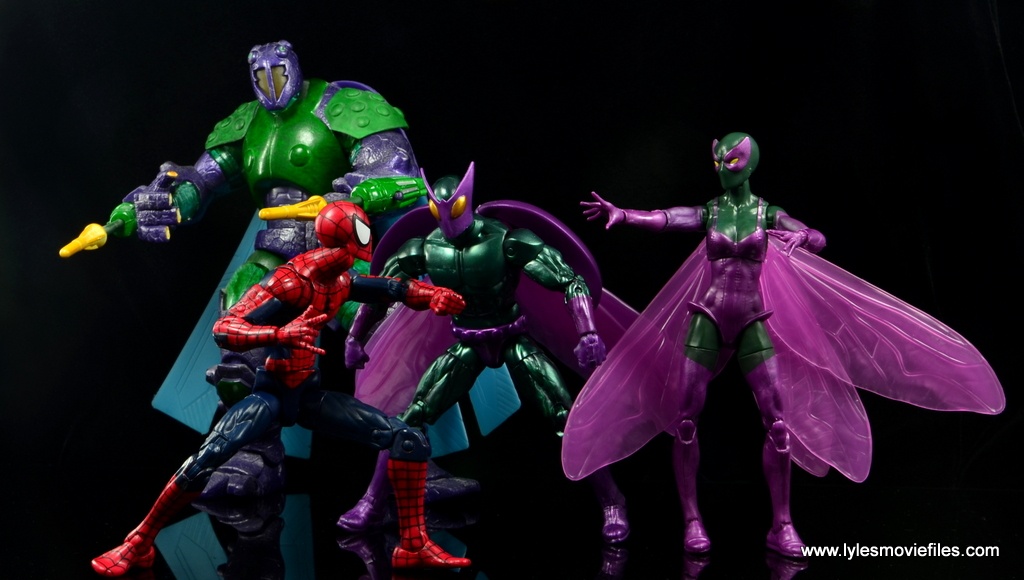 Accessories:  Beetle’s accessories are his wings. Hasbro came up with a creative way to reflect Beetle’s resting and in-action flight pod. The outer shell captures the comic book look and the detachable translucent wings used previously in Beetle and Wasp allow for dynamic flight action. This was a really smart way to do this as you can display Beetle on the shelf without making him a shelf real estate hog. 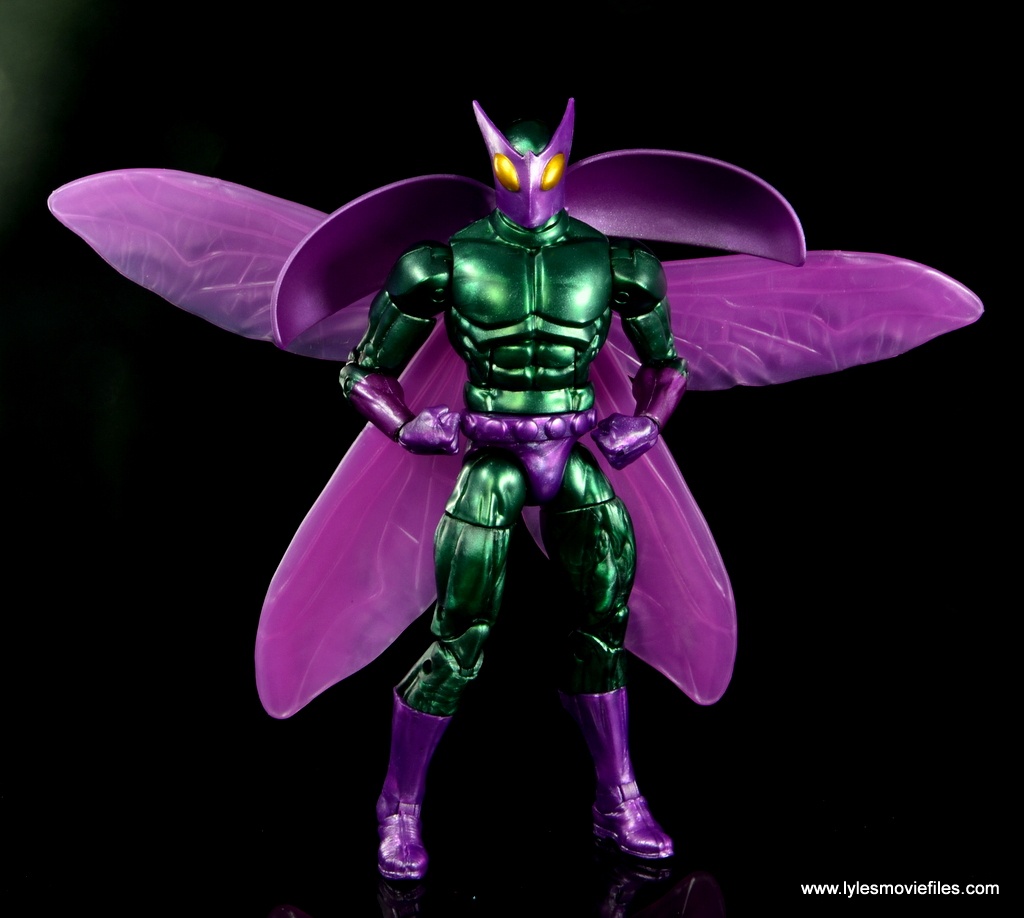 Additionally, Beetle has the right tail section of the Build a Vulture’s wings. I’m curious how this BAF fares with collectors. 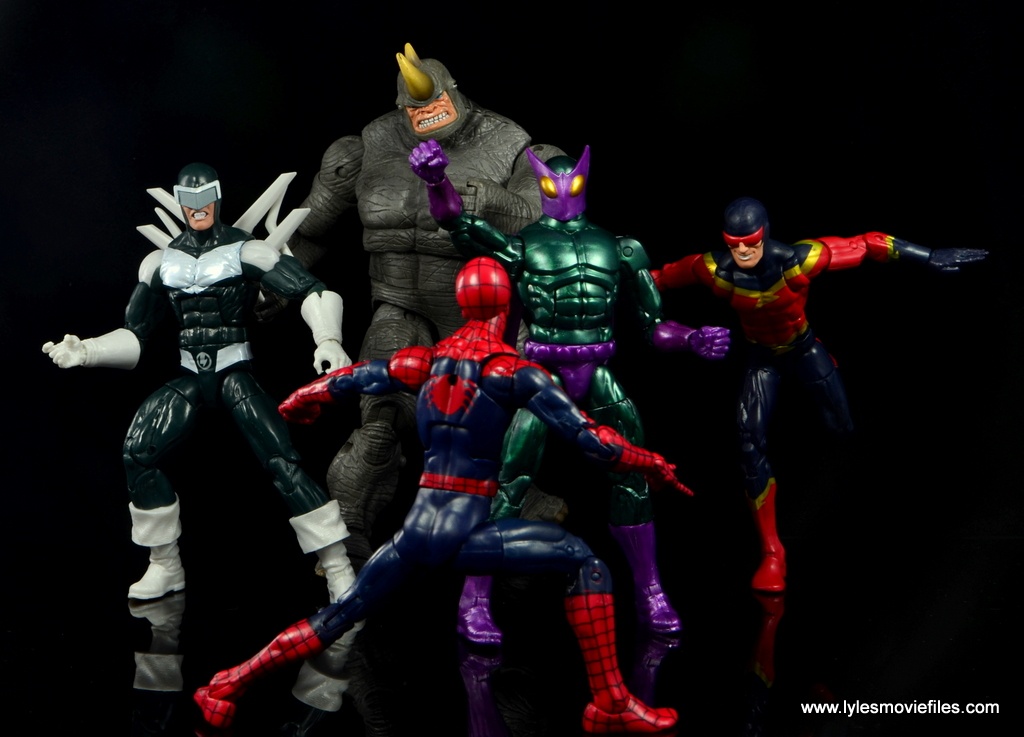 Worth it? I found Beetle for $20. I’ve heard folks have gotten him for cheaper, but I’ve no interest in trying to make up the savings driving around for it. This the regular price anyway and for figures of this quality, I’m fine with that even with no interest in completing the BAF.

Keeping with the trend for the year — we wait a long time for desired figures and Hasbro delivers. Beetle is another winner. If it was simply of matter of taking so long to get right, patience paid off. 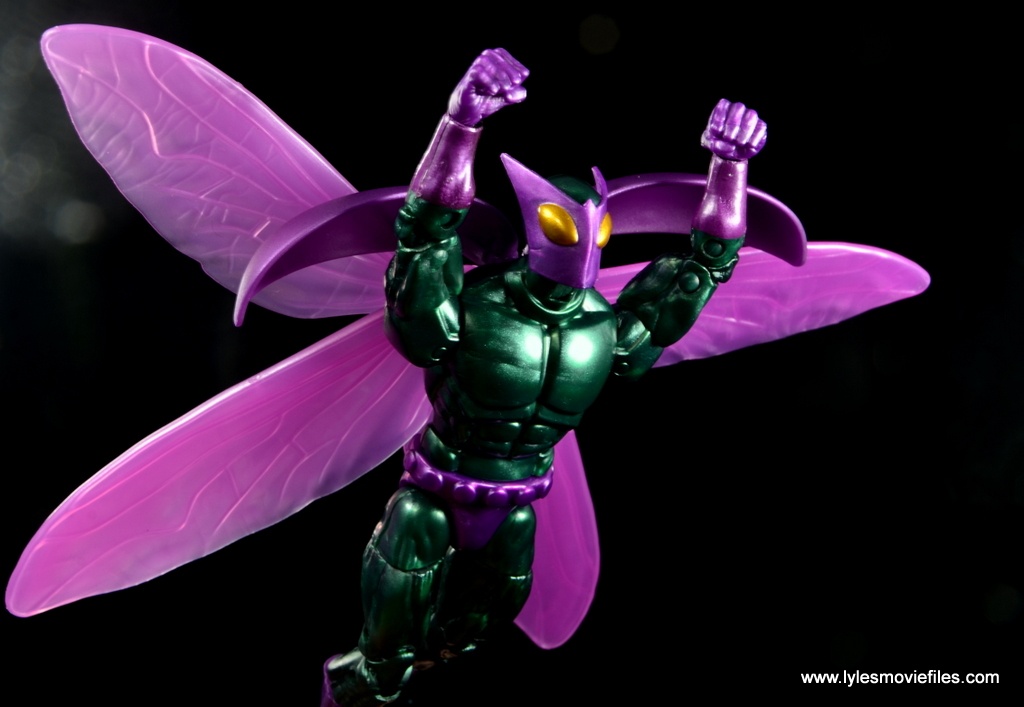 Where to get it? Look lively and you can get Beetle from pretty much anywhere. Target just got the wave in my area, but they’ve also popped up at Wal-Mart and the wave is also on Toys R Us.com. Don’t want any parts of the hunt? Grab him from Amazon for the same price.