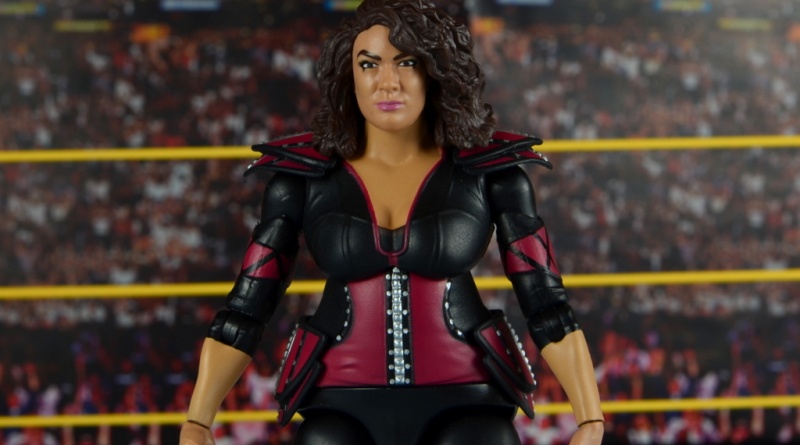 I’m waiting for the WWE to just unleash Nia Jax like TNA did with Awesome Kong. That run led to the highlight of the Knockout Division and we could eventually see that repeated with Nia. Until then, she’ll have to settle for being the most imposing female on either roster.

I was impressed with the prototype pictures as Mattel didn’t skimp out on accurately capturing Nia’s look. Let’s see how the final product turned out.

Packaging: No knock on Nia, but these Basic figure packaging does little for me. My one gripe is Mattel really should be matching up the package portrait with how the figure actually looks. Nia’s figure has curly hair while the picture has her hair straight. In this case it almost looks like two different characters.

Likeness: This is a pretty strong likeness. The curly hair was a good choice as it helps give more body to her hair and head. Straight hair probably would have made articulation trickier too. I like the expression. Nia always looks super focused when she’s in the ring and this captures that look well. 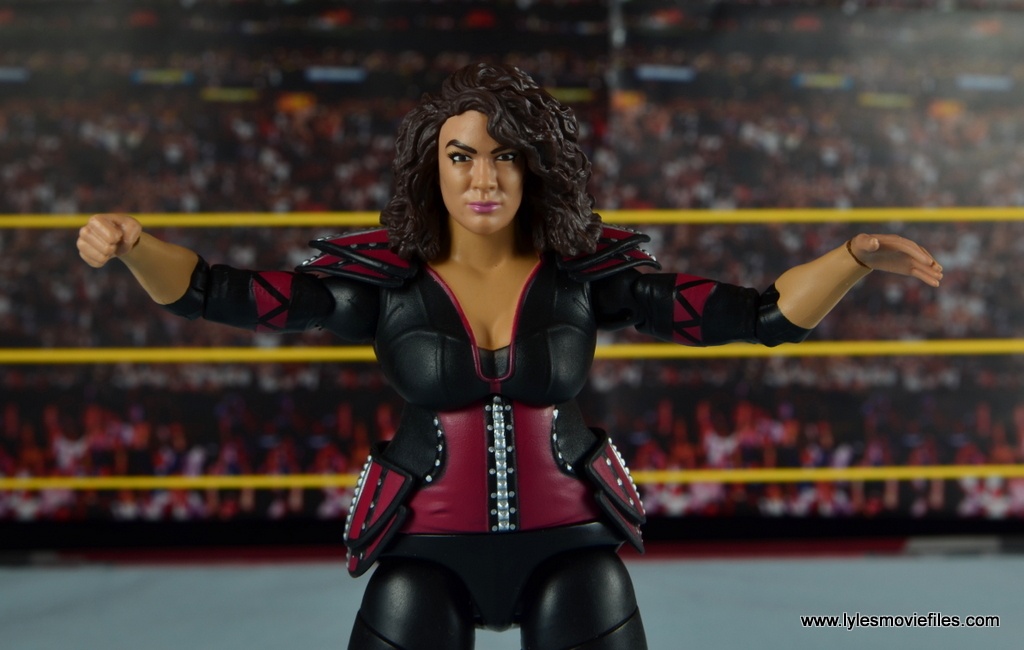 What’s most impressive with this figure though is all the detailed sculpting. From the shoulder pads to the outfit paneling, this is Stephanie McMahon figure level detail work. Mattel couldn’t get away with cobbling together existing pieces and made a perfect base body for subsequent Nia Jax figures. If only they took this same approach with the other female figures my collection would be more extensive. 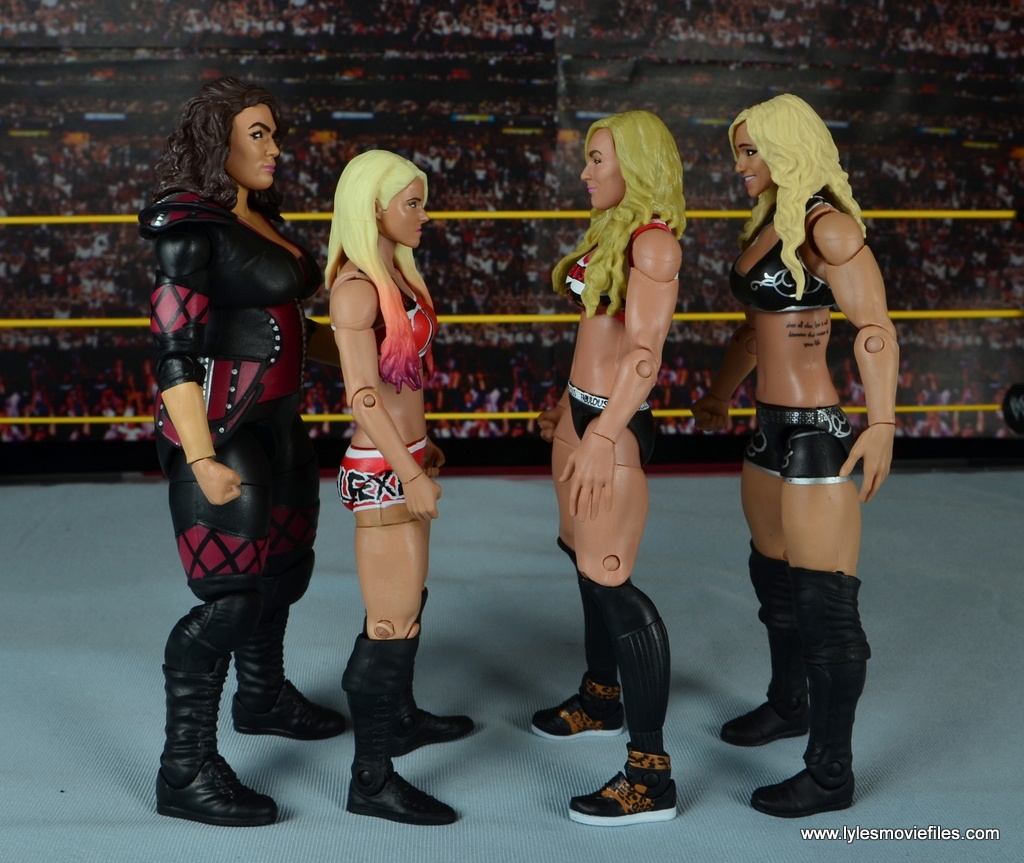 Scale: Nia is billed at 6 feet. That puts her taller than most of the females including the 5’11” Charlotte Flair. The figure reflects that about right as Nia towers over the majority of the figures.

Paint: This is a common problem Mattel hasn’t quite figured out yet. The female figures wear makeup to the ring. Some wear more others wear a little. It finishes the ready for cameras presentation.

Nia wears heavy eye shadow, which to Mattel’s credit, was started on the edges, but wasn’t completed. I’d really be curious to see what these female figures would look like with a screen accurate makeup job.

The outfit has lots of smaller pieces like the lining, buttons and arm and leg wraps. There’s a stray bit here and there, but overall this is another attire paint job home run for Mattel. 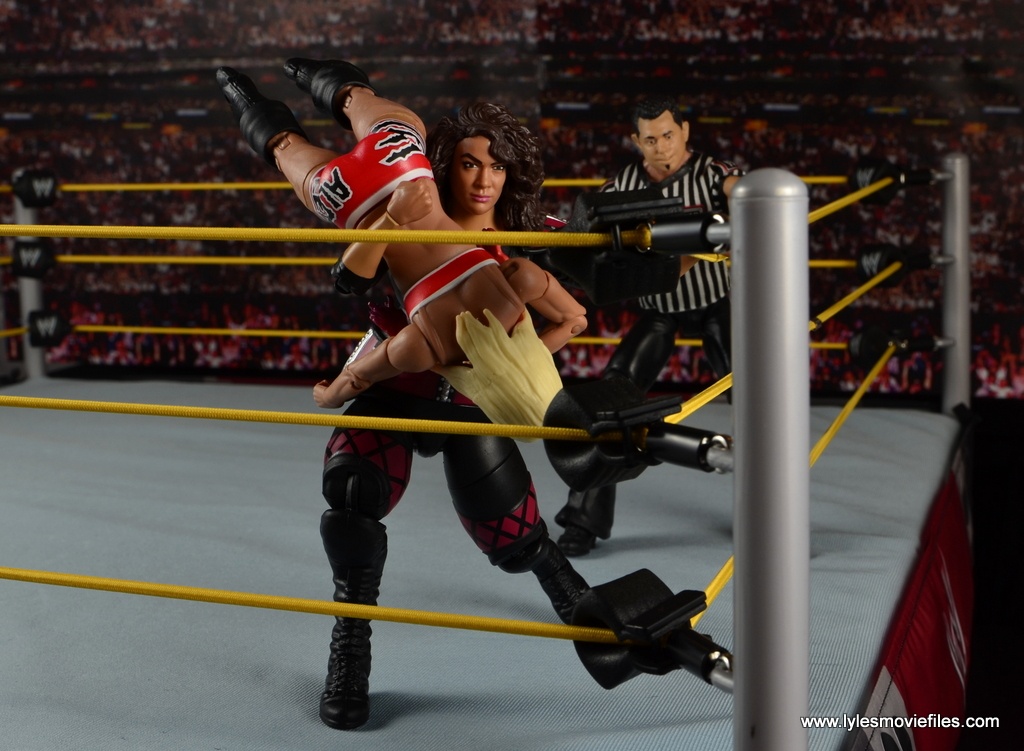 Articulation: This is a new base body and it’s more Elite-like. Nia isn’t doing a bunch of flips and counter wrestling so she isn’t so reliant on spectacular articulation like some of her peers. Ironically, Nia sports the best articulation of any female figure thanks to the double-jointed knees. Her frame allows her to ‘hold’ the other figures better as well making for a rare Mattel WWE figure that’s fun to play with and pose. 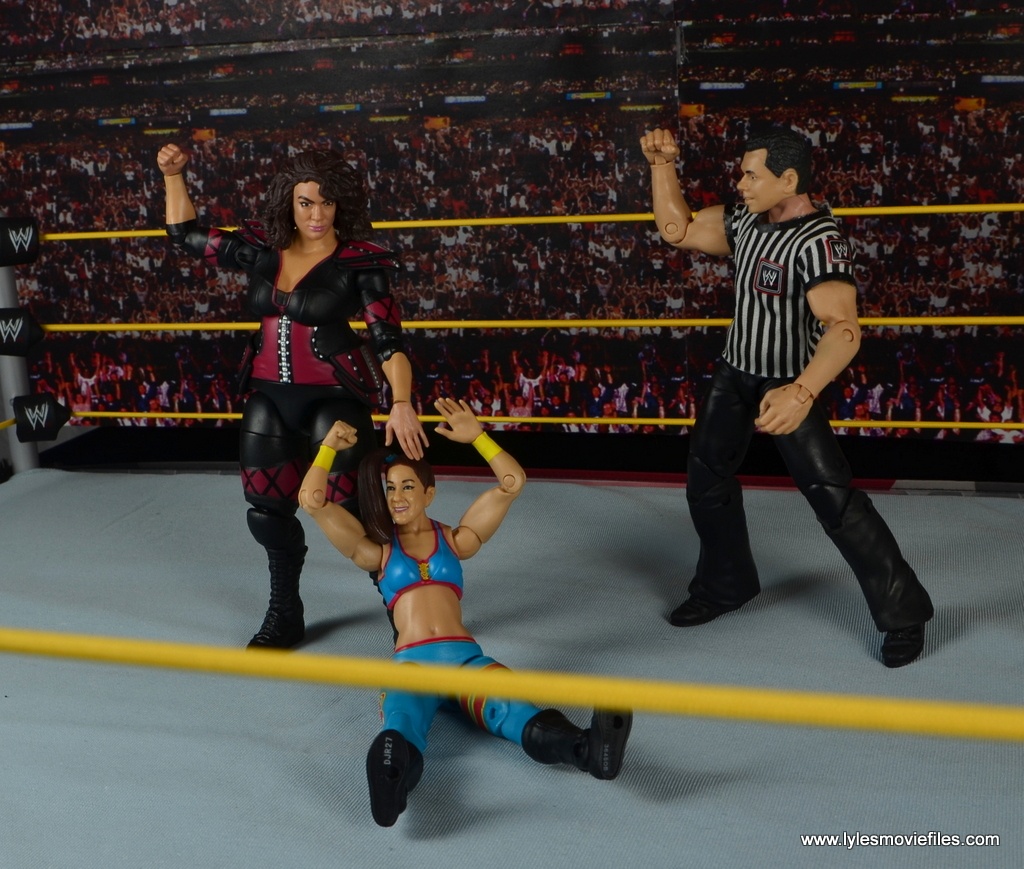 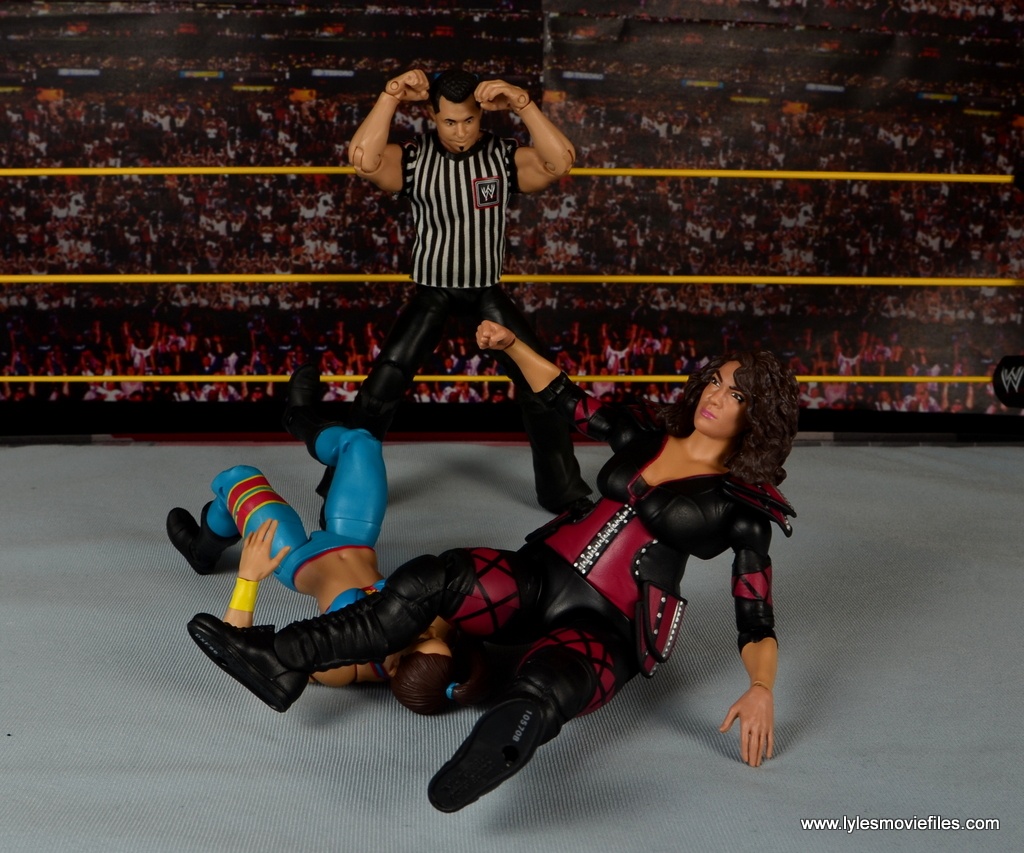 Accessories: Typically the Basic figures don’t come with any accessories, but Mattel has slipped in a nice surprise. Every so often this year figures will come packed with a Slammy Award. I was fortunate enough to see two Nia Jax figures on the stands and naturally grabbed the one with the Slammy. 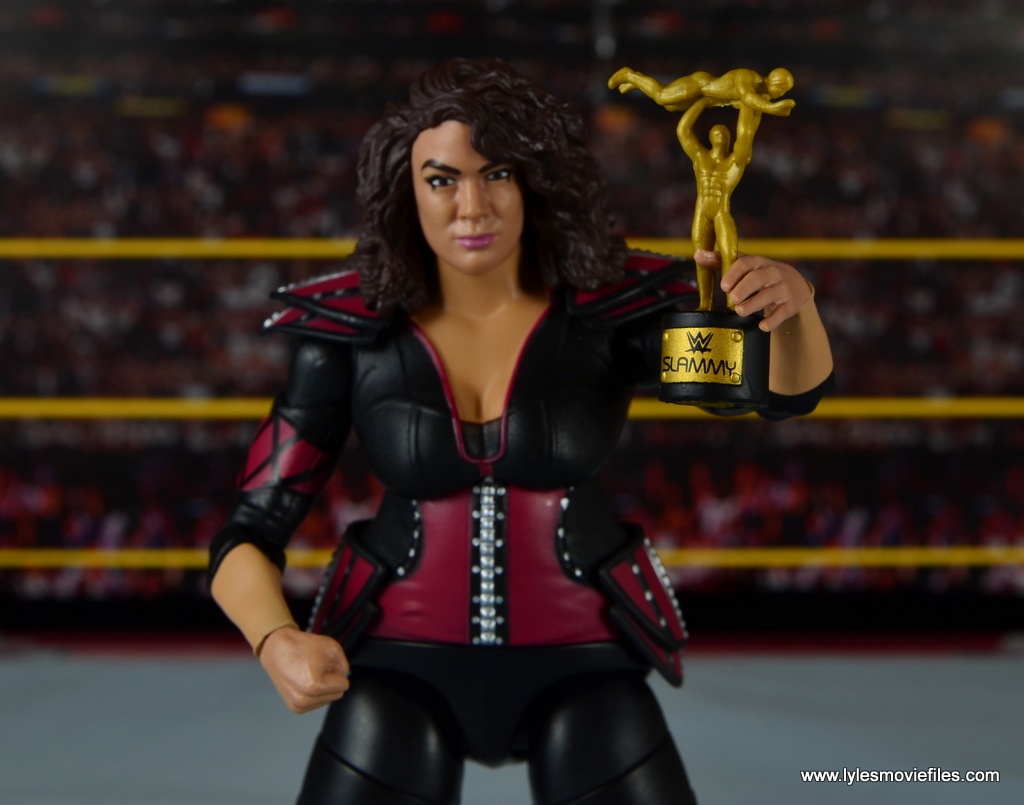 Worth it? Toys R Us is having a killer sale right now. You can get Basic figures for $7.99 and Elites for $15.99. Not a bad deal. For $8, Nia was going to have to be pretty terrible to not be worth it. Factoring in the dedicated sculpting and this is an Elite level female figure.

Nia completely destroys the curve for Mattel’s other female figures. If only they were all of this quality. 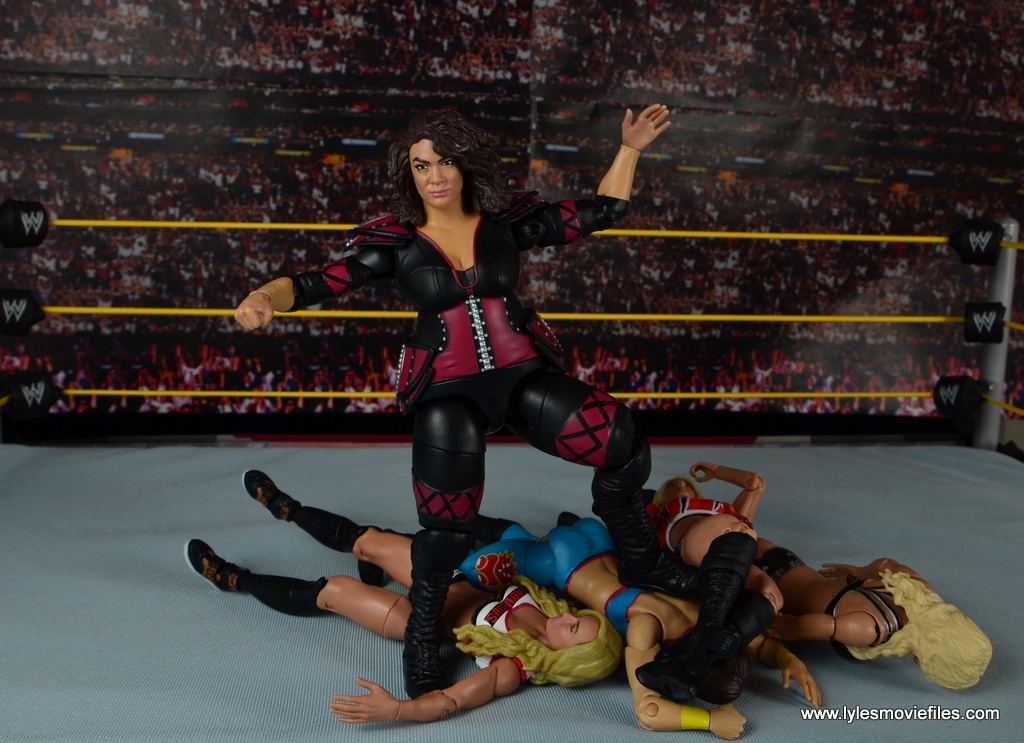 Where to get it? The Basic series is pretty much everywhere. Toys R Us is doing a pretty good job of stocking figures though and being pretty current. I’d try there before going to Target or Wal-Mart. If you get tired of the hunt, you can always go the Amazon.com route.