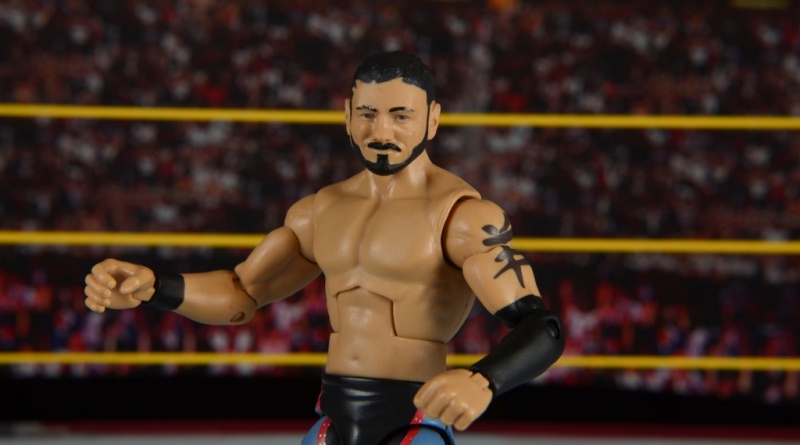 While I missed his Ring of Honor heyday, I was a big fan of Austin Aries from his TNA run. I knew enough about him to be excited about his arrival and his TNA stint hardly disappointed. Like most guys these days, I was thrilled he finally decided to leave TNA. Partly so he could get in the big spotlight and also so I could get a figure compatible with my growing Mattel WWE collection.

Aries makes his Elite debut as part of the Target exclusive NXT TakeOver series. While it isn’t the greatest figure that ever was made, it’s not bad. Let’s take a full look now.

Packaging:  I’ve grown a little bored with the Elite style packaging. It needed some punch. This X style packaging is tremendous. The predominantly white and yellow packaging definitely stands out on the pegs. The black accents are a nice touch as well. Based purely on the presentation, this might be my favorite mass market packaging of the year.

The front has useful info like his NXT debut and the side continues that eye-catching appearance with the NXT yellow and black color scheme. The inner lining has Aries’ name in big bold lettering. 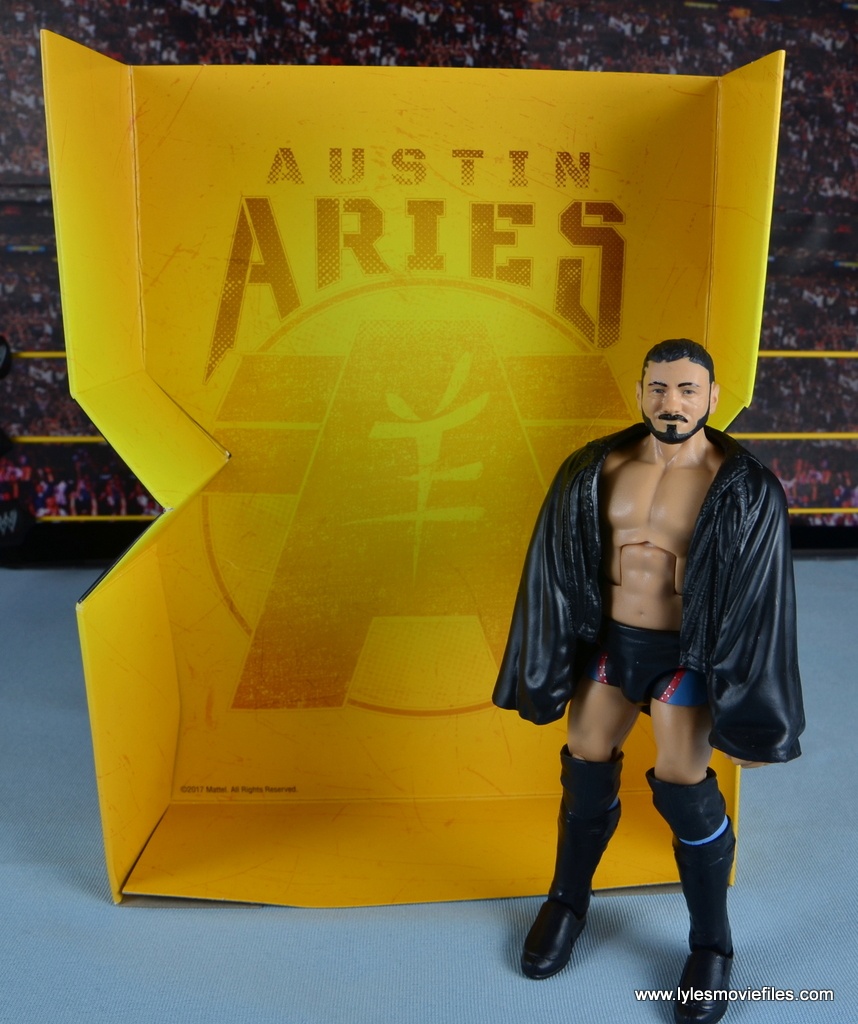 And to further impress me on the back there’s an actual bio explaining Aries and his stats. This small paragraph is all I’m looking for and should be the norm for all WWE packaging. 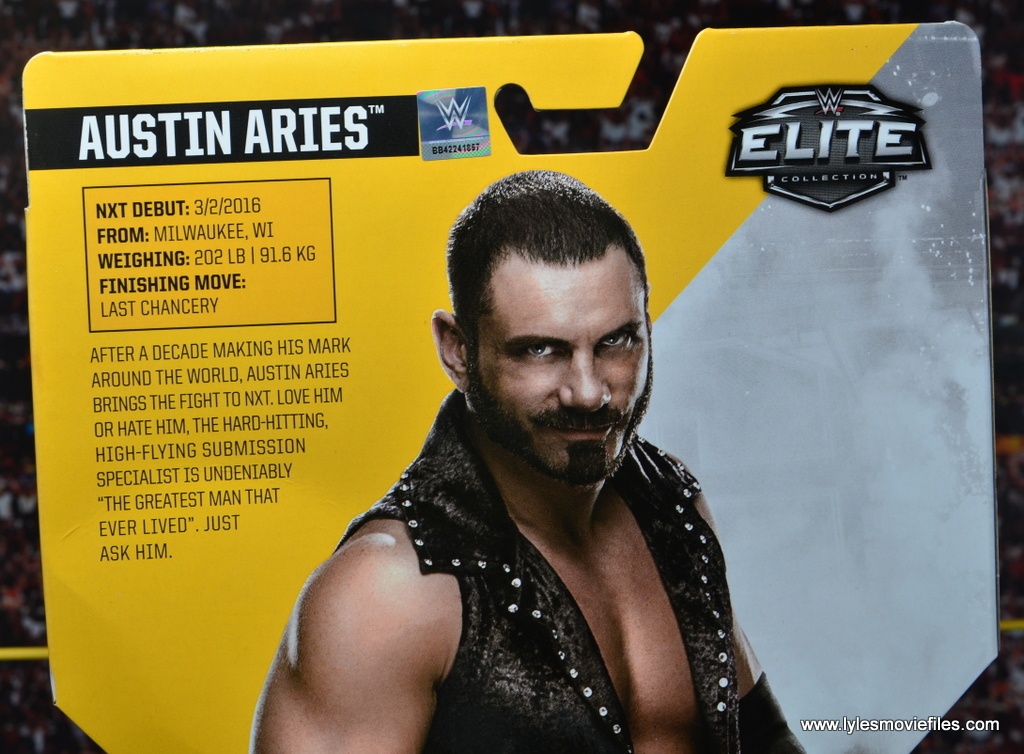 The only down side to the presentation is it really shows off the lack of accessories.

Likeness:  The likeness is real close. Mattel got the all the expressive creases and wrinkles in the face and Aries’ signature smirk. What holds the likeness back is the eyes are squinting a little too much. They’re too tight making it look like Aries is trying to decide what smoothie he’s ordering.

Otherwise, the figure looks solid. Aries is a pretty plain looking wrestler — Mattel’s favorite kind — so there wasn’t any extravagant detail in the attire to nail down. 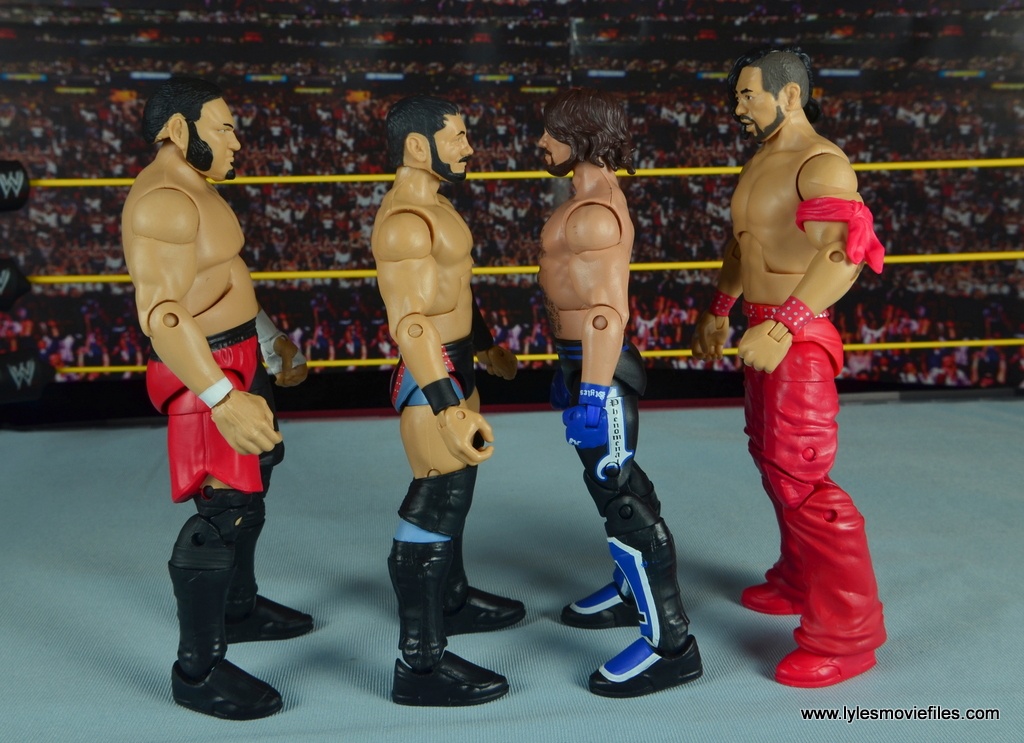 Scale:  Aries is billed at 5’9″. Shorter than the 5’11” AJ Styles and 6’2″ Shinsuke Nakamura and Samoa Joe. The height looks about right and I definitely won’t quibble over an inch or two.

Paint:  Mattel must have been hi-fiving at the thought of how easy Aries was to make. Aries has a simple tight design that’s faithfully replicated. Aries is essentially blank besides his simple arm tattoo.

I’ll give credit Mattel for getting the arm sleeve and the under the knee pads sleeves done as well. Sometimes they’ll skimp out on the simplest things so I’m glad those were included. 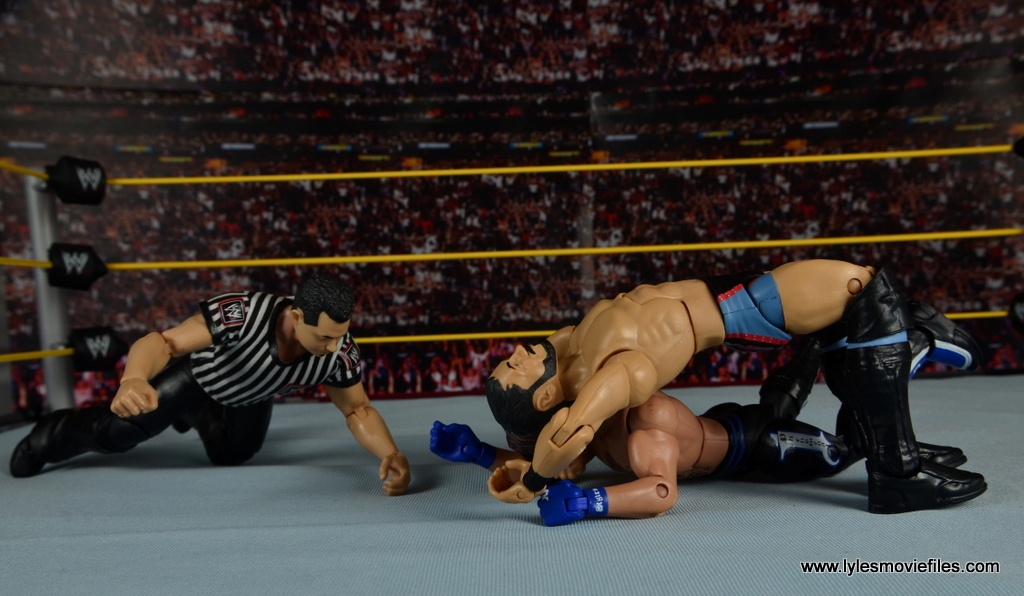 Articulation: A guy like Aries makes the Elite articulation fun. I was able to pull off all of his signature moves, including a reasonable facsimile of the Last Chancery. The only one that didn’t work as well was the ear clapping spot. Overall the WWE figures would benefit from more of that butterfly style joint, but that ship has sailed awhile ago. 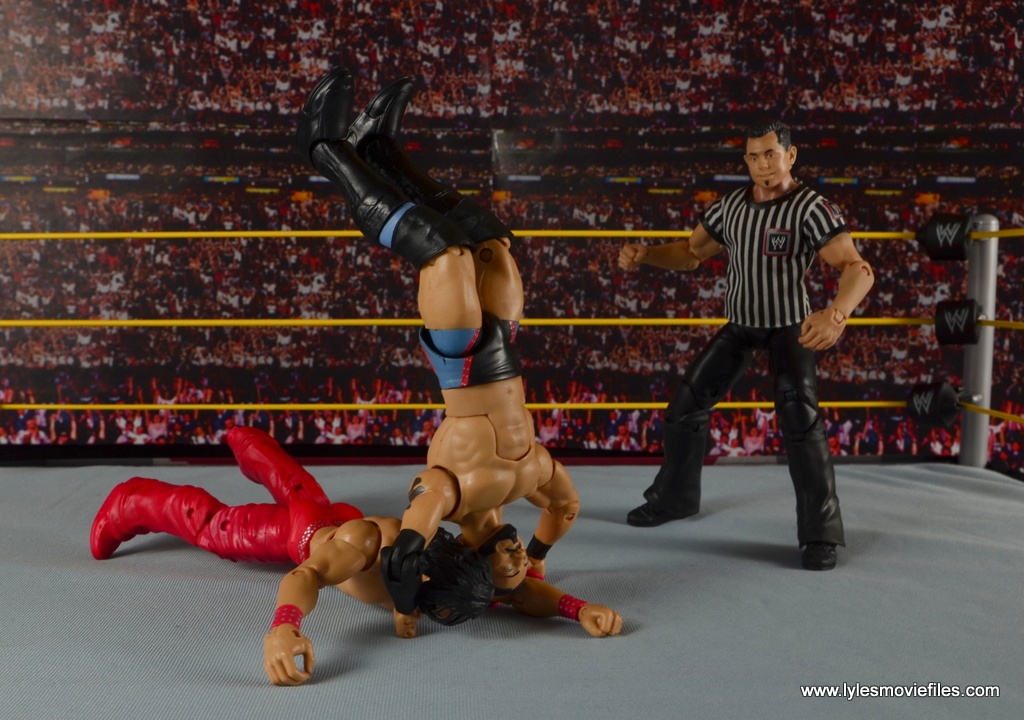 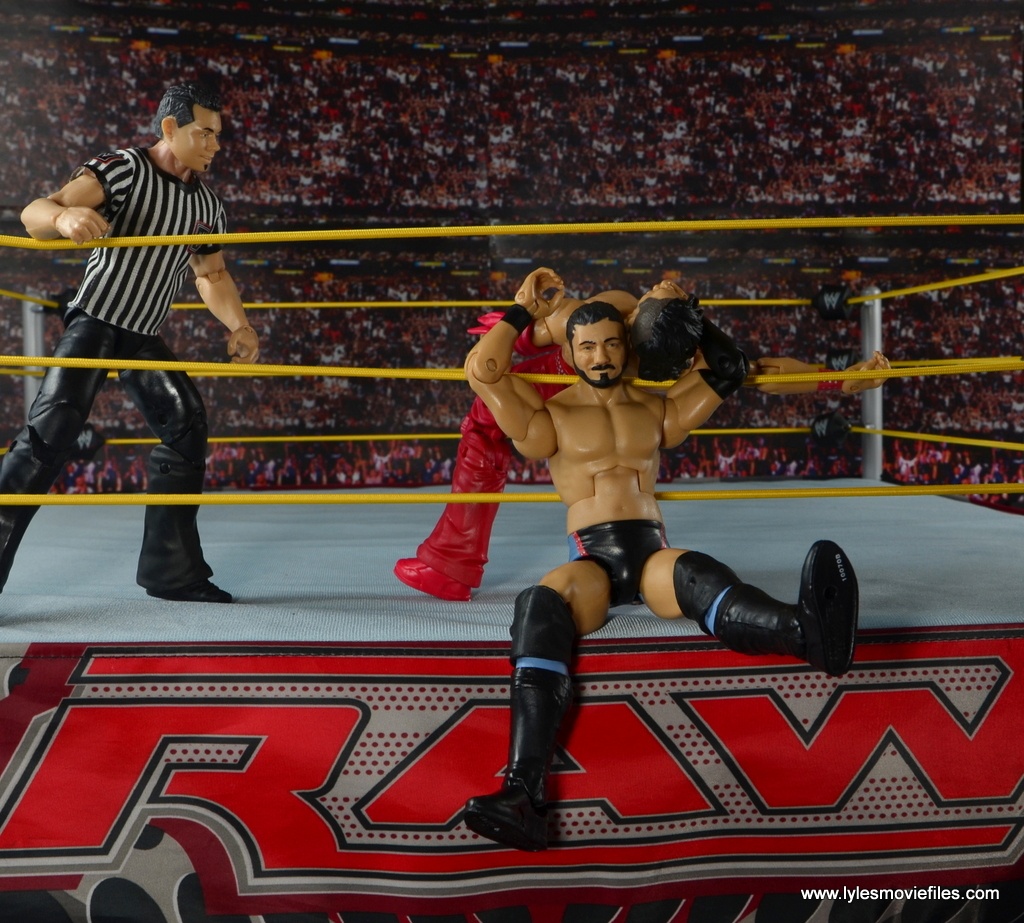 Accessories:  It doesn’t help the package presentation when Aries is wearing his lone accessory. For his Elite debut, he gets his cape. That’s a good choice, but the plastic shell version is uninspiring even with Aries’ logo on the back. There’s no way Mattel can make these shoulder capes look good. It hasn’t worked with Narcissist or Neville. It’s time to go cloth now.

If it were cloth, I would have been OK with such light accessory options. This is another case where just a simple chair or a microphone that could be used with anyone would help add some value. We could have gotten our first NXT mic. If nothing else, maybe Mattel should have included the vest he’s sporting on the package.

Worth it?  Aries is clocking in right now for $20. Of the four Elites in the TakeOver wave, he’s probably one of the more demanded ones so I wouldn’t wait on clearance. His lack of accessories does make the $20 a more challenging sell than some other Elites like the recent Shane McMahon. 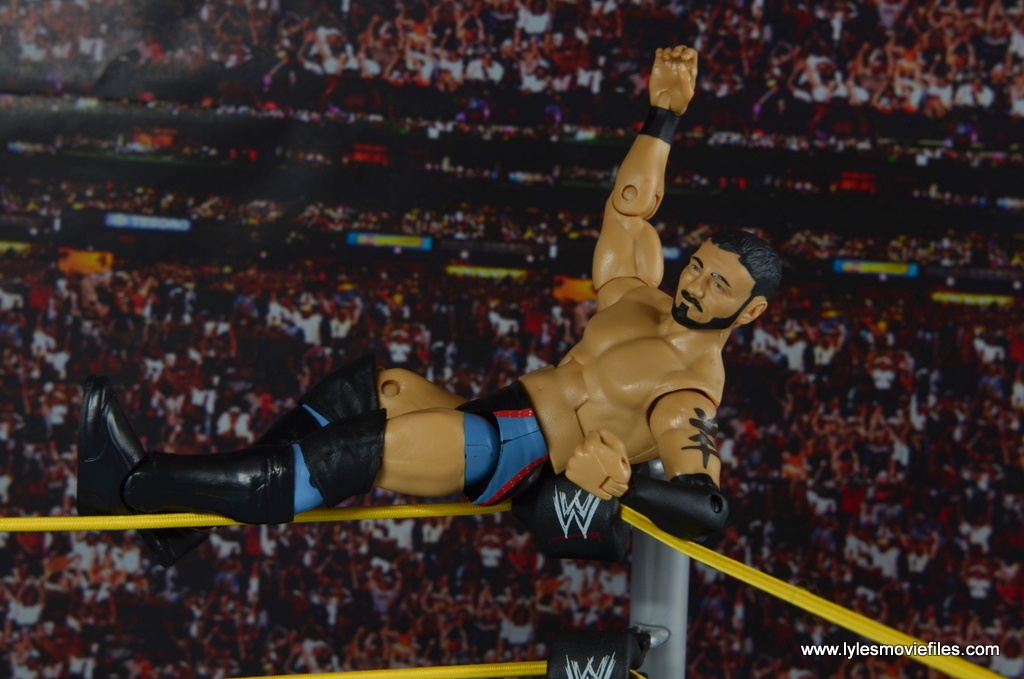 Something about the eyes holds back the likeness and the underwhelming accessory prevent this from being the greatest figure ever. But it’s a nice addition to my collection.

Where to get it?  Target is the only bet here. Amazon has him, but good luck waiting on close to retail prices.