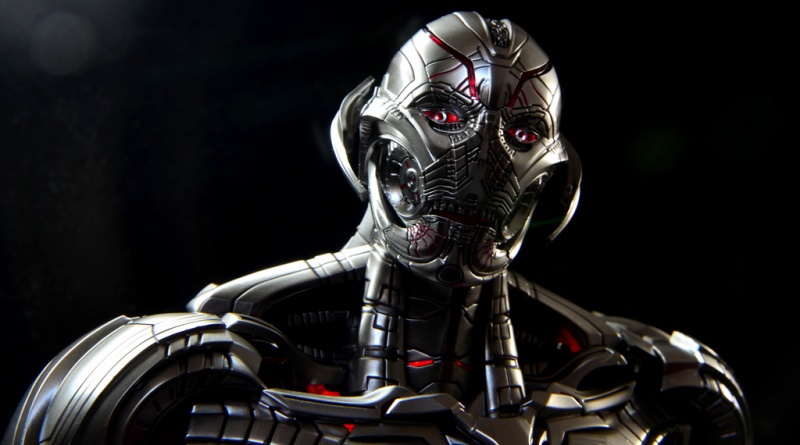 I was so glad the second Avengers film didn’t immediately feature Thanos. That helped make the build to Infinity War all the sweeter. Besides, the Avengers have plenty of other worthy opponents. Ultron was a pretty logical choice as he was a legacy Avengers villain. Hot Toys made a number of Ultron figures from his Avengers: Age of Ultron appearances, but I wanted the final boss version — Ultron Prime. Let’s see if he’ll stand or fall.

Packaging:  Of all the various character specific color schemes for the Age of Ultron packaging, Ultron’s might be my favorite. Usually, I like more than the basic black and red, but it makes for a fitting color choice for the metallic menace.

There’s something a little creepy about removing the outer sleeve and seeing Ultron ‘resting’ with his eyes unlit. I’m going to blame that on watching too many Child’s Play movies as I fully expected the eyes to light up and the figure to rip through the package and come after me. 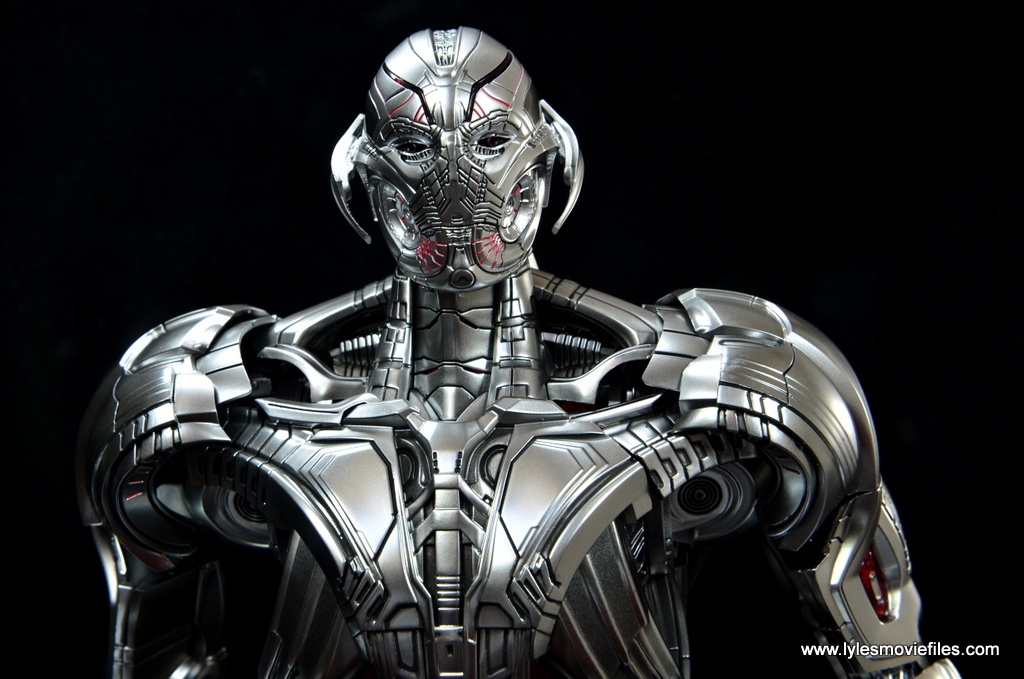 Likeness:  I wasn’t the biggest fan of the Ultron design for the film. There was something off about the shoulder joints as they were the most prominent part as opposed to the chest. It made Ultron look more like a muscle head who did shoulder day every day and neglected his slender waist. 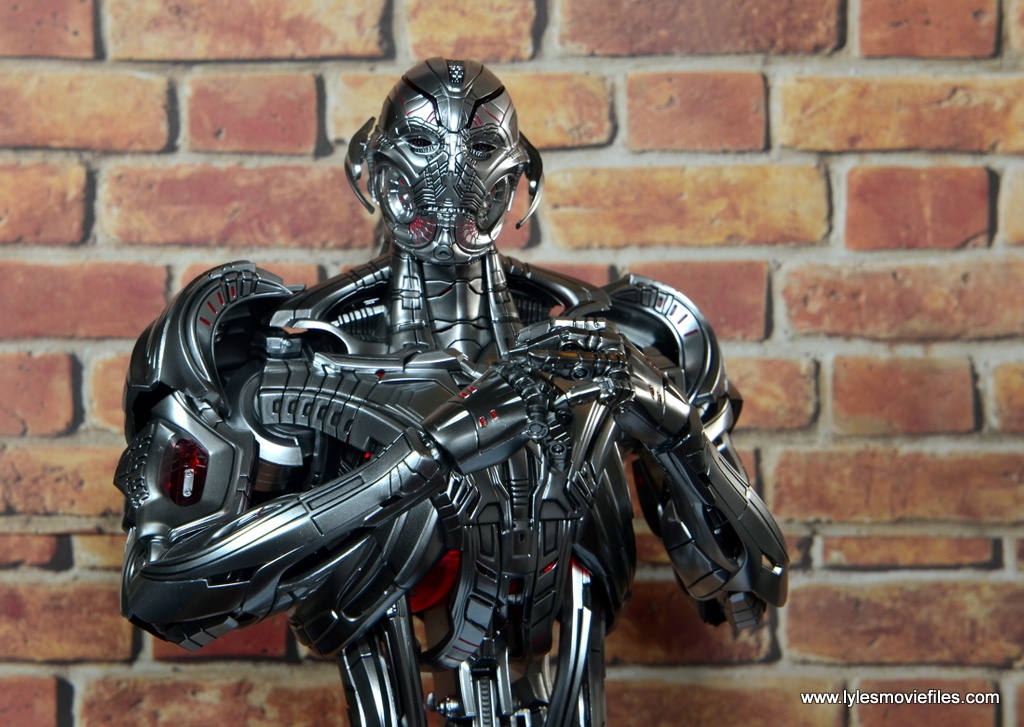 That said Hot Toys did an excellent job of capturing all the panels and gears for this design. It’s funny how the design almost works better as a toy than it ever did in the film. The paneling from large to small comes together nicely. 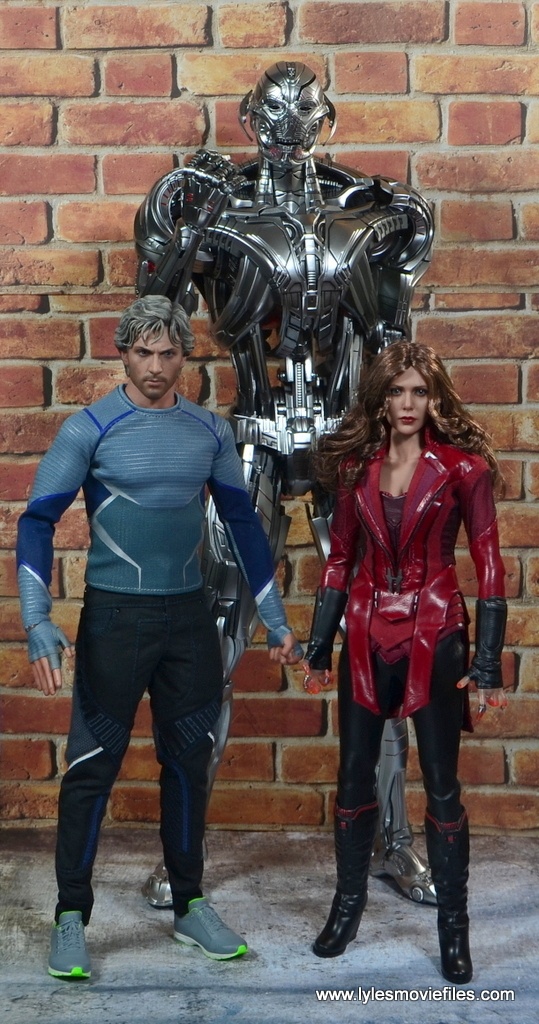 Scale:  Another weird departure from the comics for me was Ultron’s scale. He towered over most characters, which isn’t necessary. Nearly indestructible robots don’t come across any less imposing because they’re human size.

In keeping with the scale from the film, Ultron Prime will look down on every figure besides The Hulk. I’m not a fan of Hulk having an equal in the height department, but at least Hulk has the mass so he still looks more formidable. 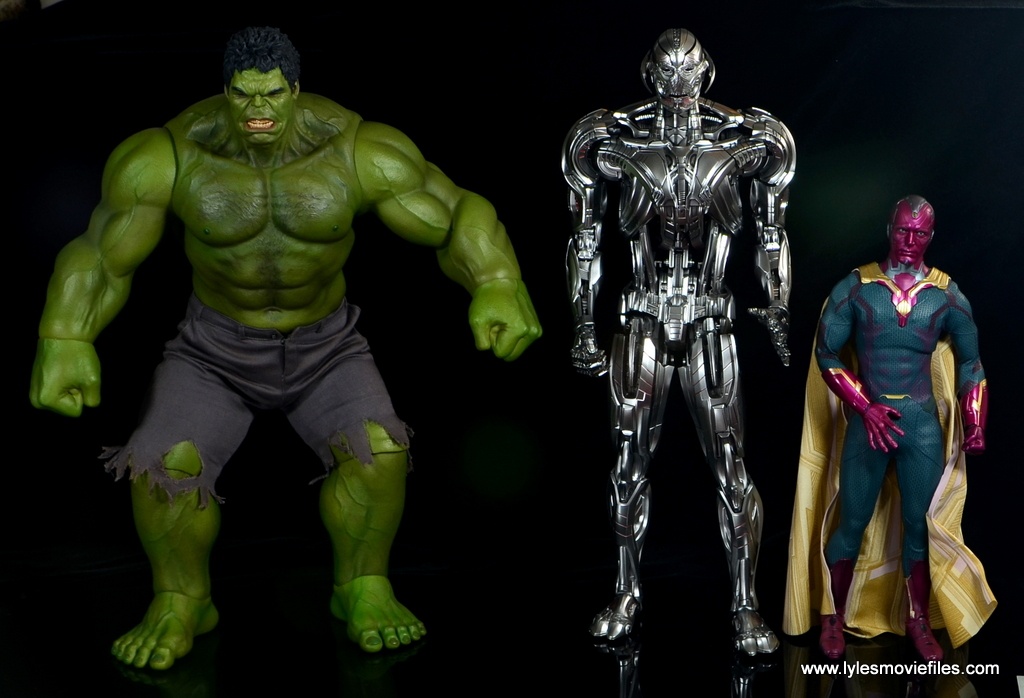 Paint:  There’s not a lot here since Ultron Prime is largely metallic silver. There’s some red accent marks throughout, but save the face area, you won’t see them from a distance. 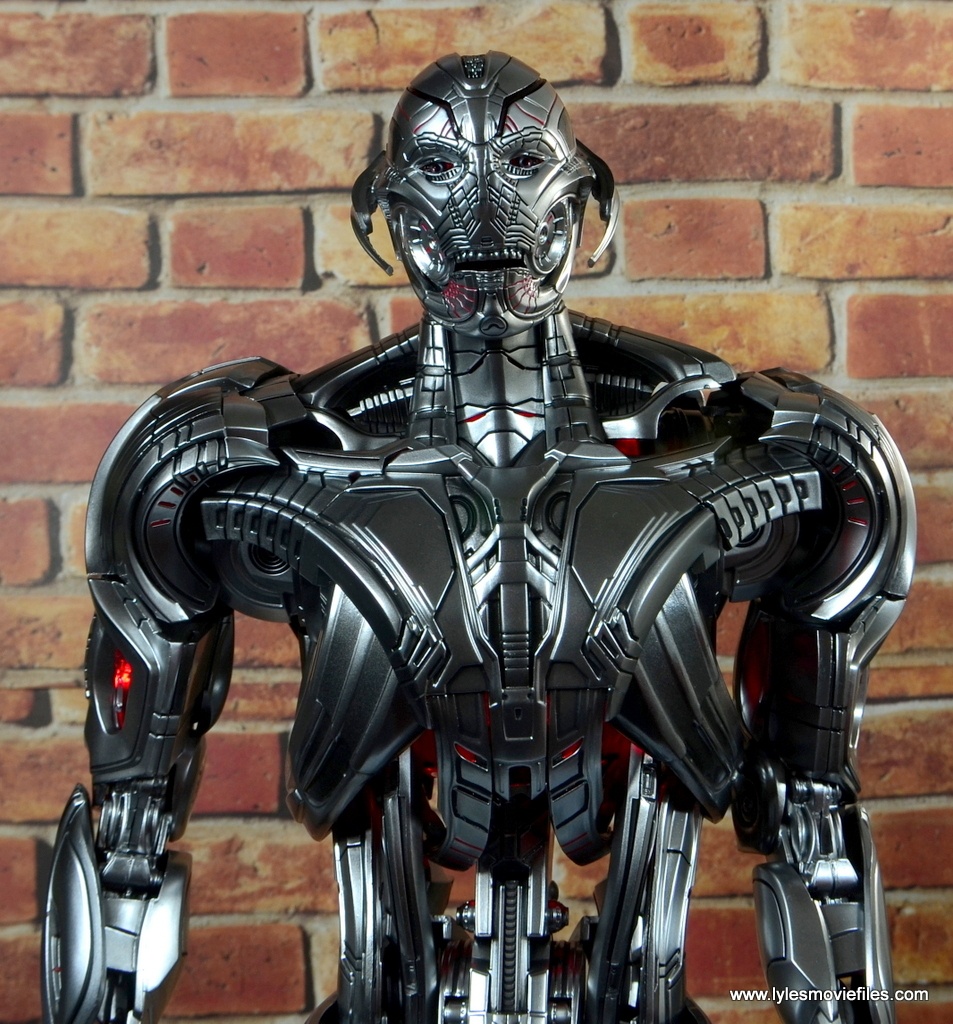 To accommodate the light up feature, his colored areas are black when the switch is turned off. That’s OK for the main body, but it looks weird at the eyes. I wish Hot Toys could have figured out a way to have visible eyes even when the switch is off. 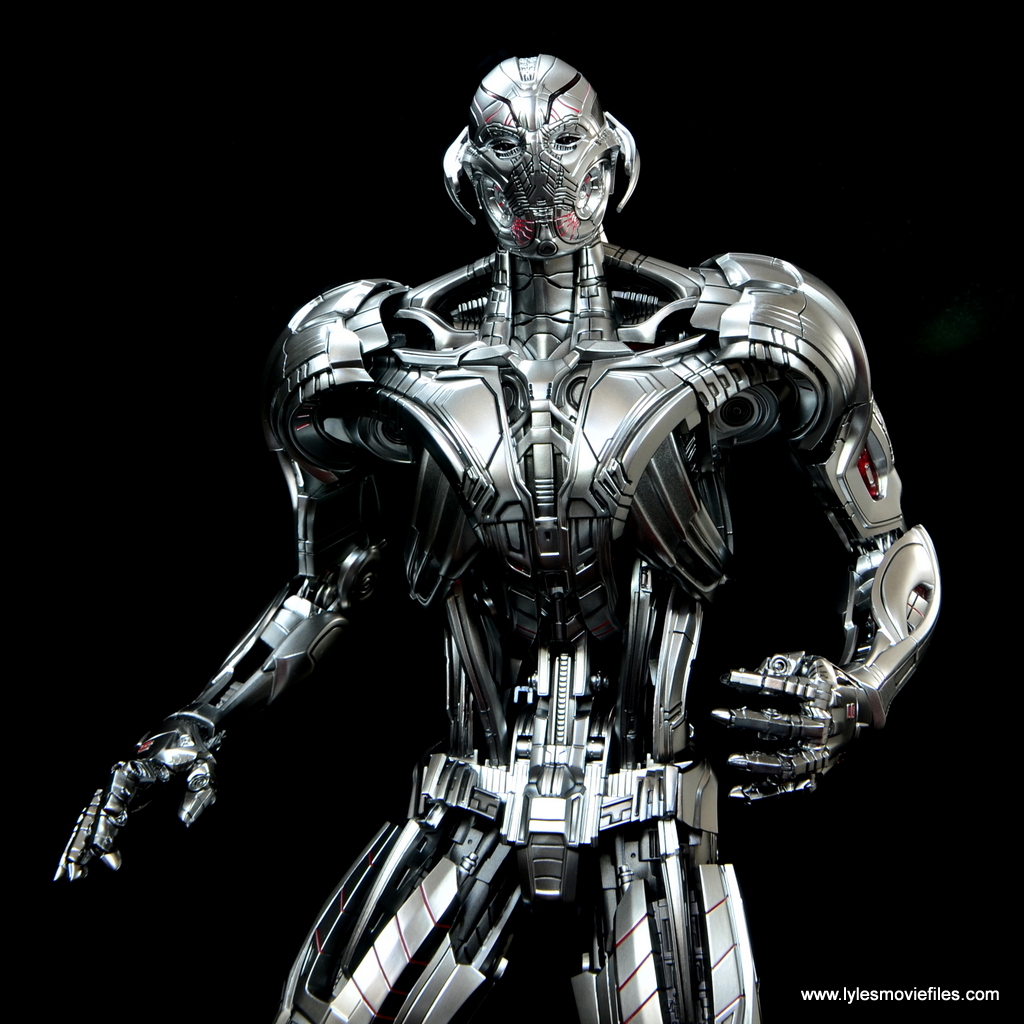 That doesn’t sound all that positive, but the metallic paint job is consistent throughout and looks very clean. It’s even more impressive considering this is all paint work since there’s no die-cast to make things easier. 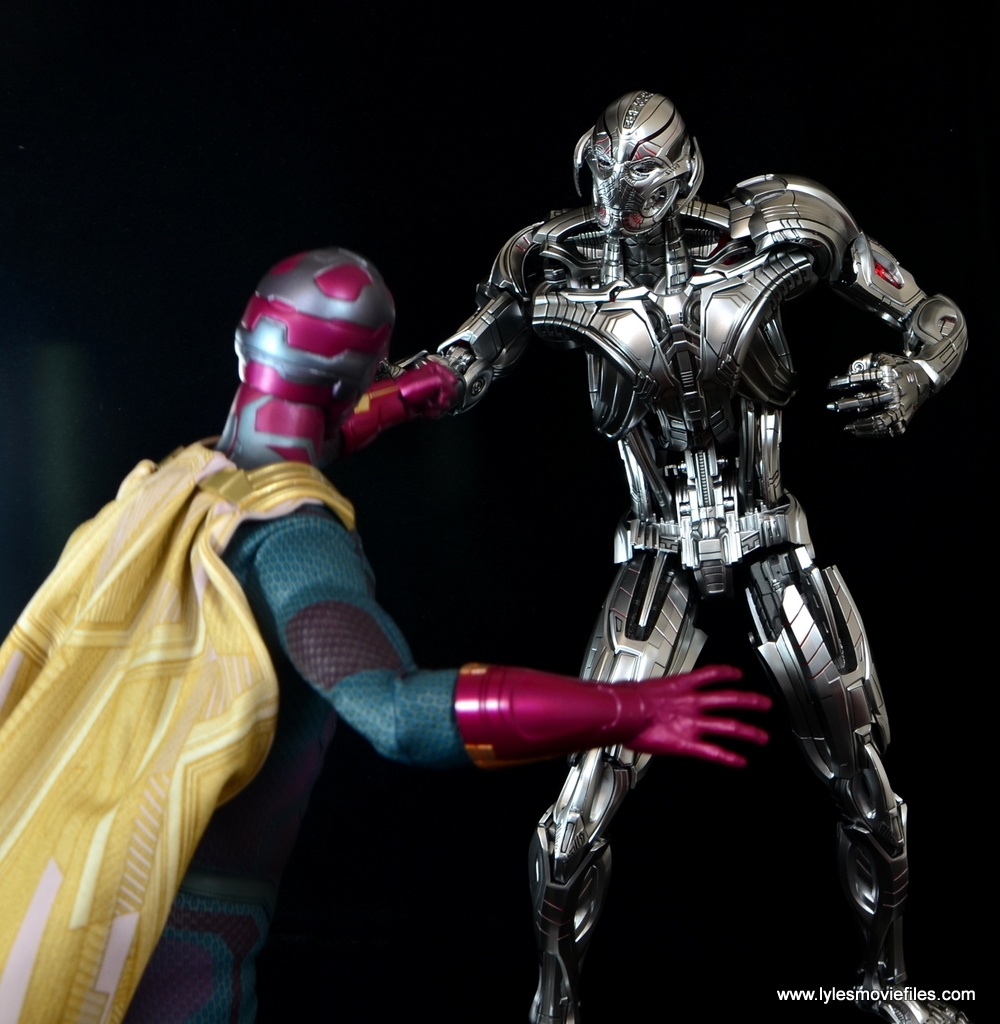 Articulation:  Ultron wasn’t engaging in too many brawls with the Avengers, but he did throw his share of punches. The most important articulation point to Ultron was hunching over. Surprisingly, Ultron has a lot more articulation than I was expecting. 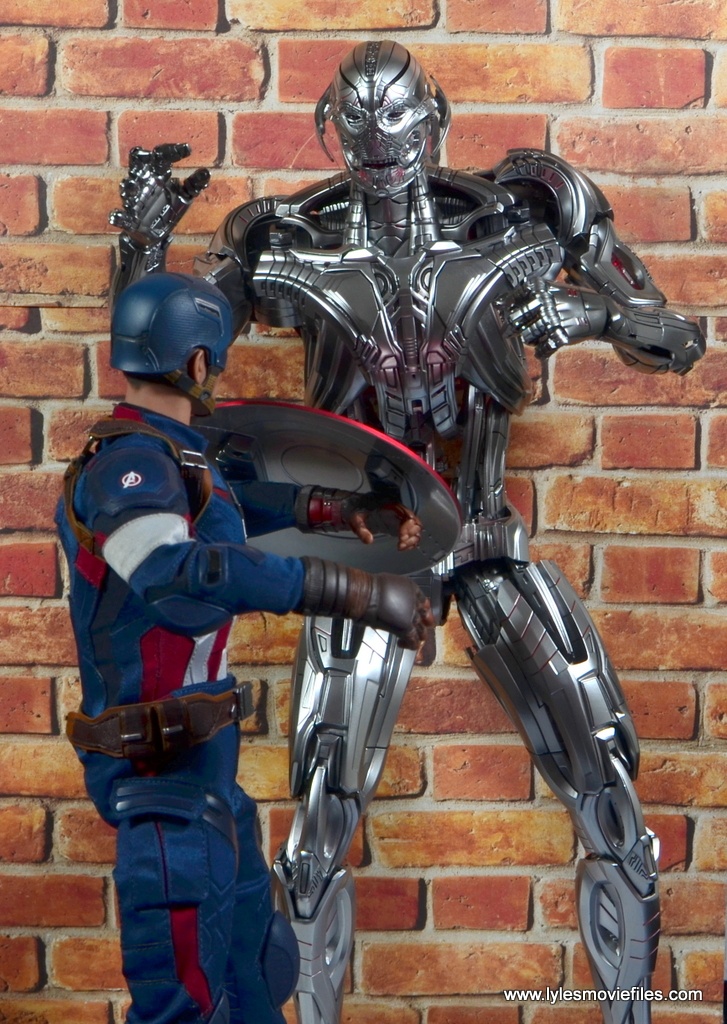 He can strike some deep poses and I didn’t miss the waist articulation here at all. I wish there was a bit more range on the neck articulation though. To help add a little more character, his mouth is also articulated.

Due to his height, he had to crouch to get to eye level with people. This is also helpful for folks like myself who display their Hot Toys collection in a shelf and need a little flexibility. 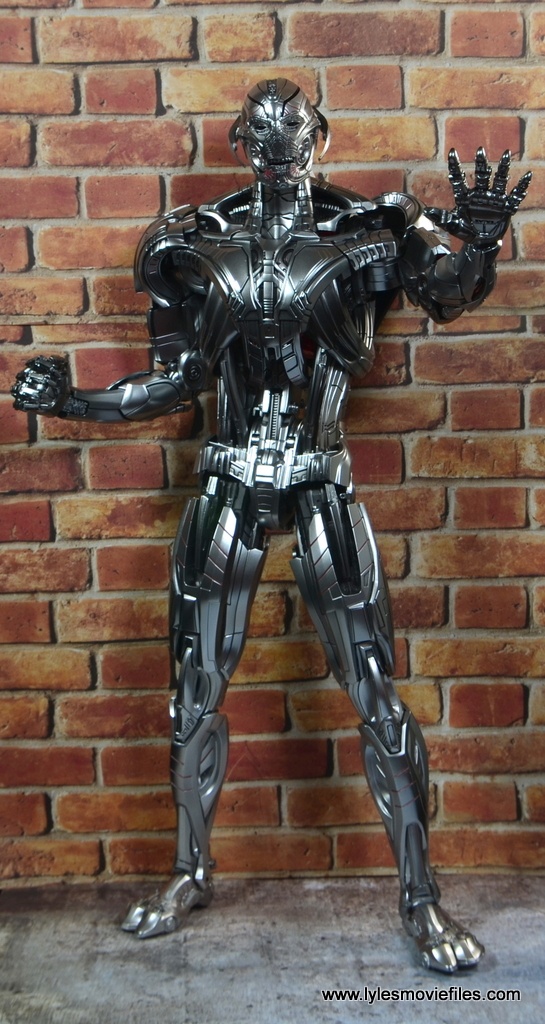 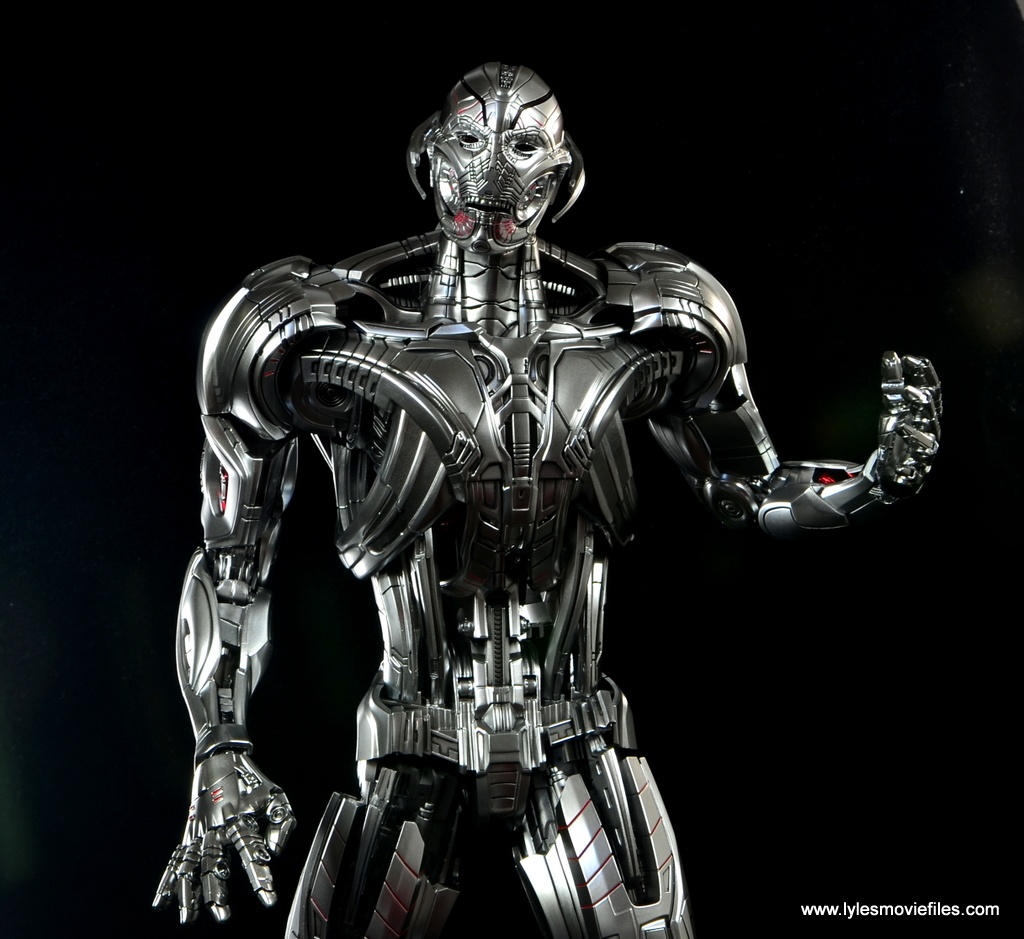 Accessories:  Ultron comes with a LED light-up figure stand. This is a very cool piece and makes for a terrific centerpiece for an Age of Ultron display. This is a slightly revamped version of the Avengers logo to incorporate the metallic Ultron theme. The red light is strong and I like it a lot.

Only problem though is we’re used to getting a lot with Hot Toys figures, especially those more than $300. That’s a pretty slim amount of accessories and more than a little disappointing.

Light Up Feature: This is continuing to be a problematic area for Hot Toys. Considering we’re paying a premium price for already pricey figures, they need to work this out. Plan to devote at least 20 minutes to putting the batteries in. They’re tiny and have a tendency to pop out when you place the second or third battery in. 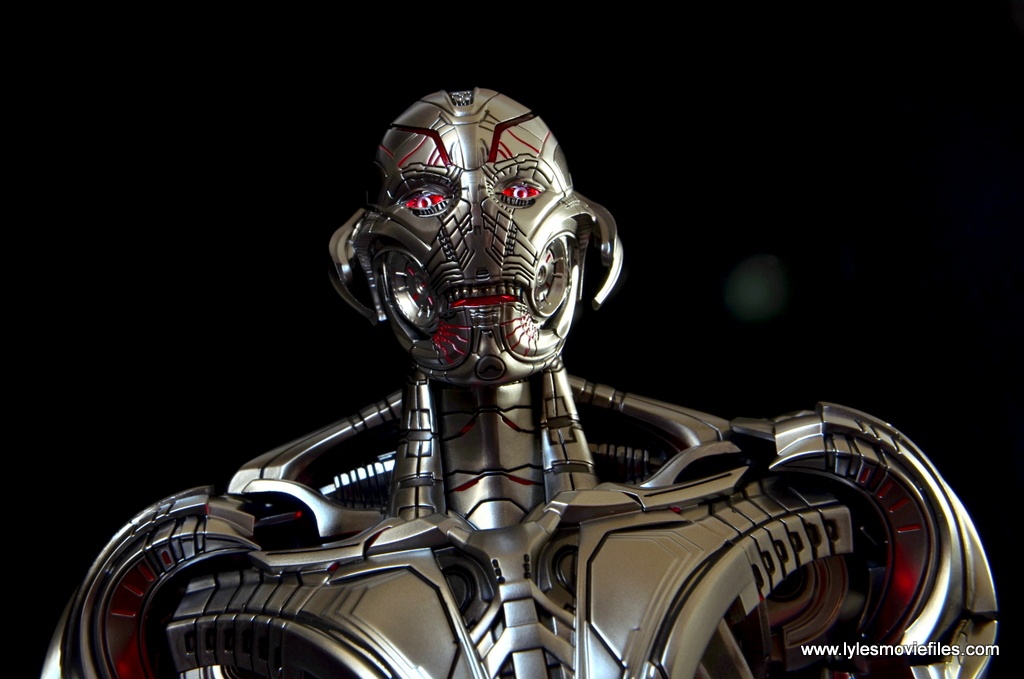 Ultron Prime requires extensive use of the included plastic piece to raise the panels to turn the switches on and off. While it might not be on model, I’d rather have these switches on the exterior. Or for Hot Toys to use magnets. I’m concerned about breaking the plastic piece and damaging the figure. Neither is a good look.

The lights show up best on the torso area and really bring some extra pizazz to the figure. I was disappointed with the weak strength of the head lights and the questionable use of white in what should be an all red area. The shoulder lights are better and they have an easier to open panel. 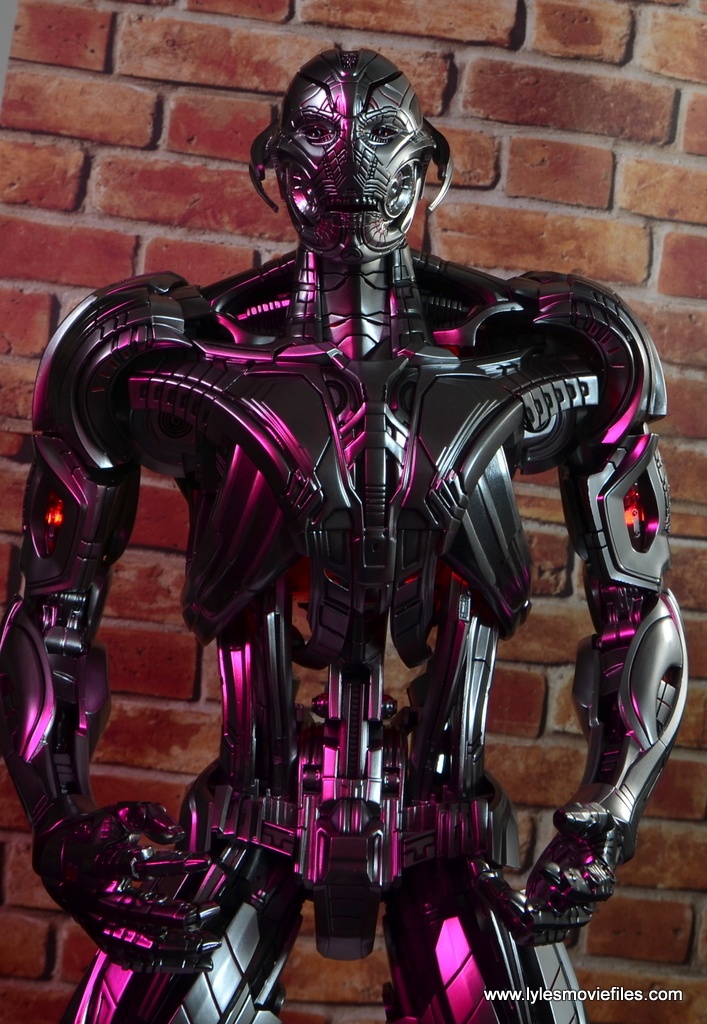 Worth it? The big reason it took me so long to get Ultron Prime was the cost. At $374, this big guy was nearly prohibitively expensive. Thanks to a little patience — a Black Friday sale with $75 off and free shipping, this was a lot more feasible with Sideshow Collectibles’ payment plan.

Hot Toys’ struggle with the light up feature dings Ultron Prime a bit, but this is still a good figure thanks to the scale, articulation and sculpt. 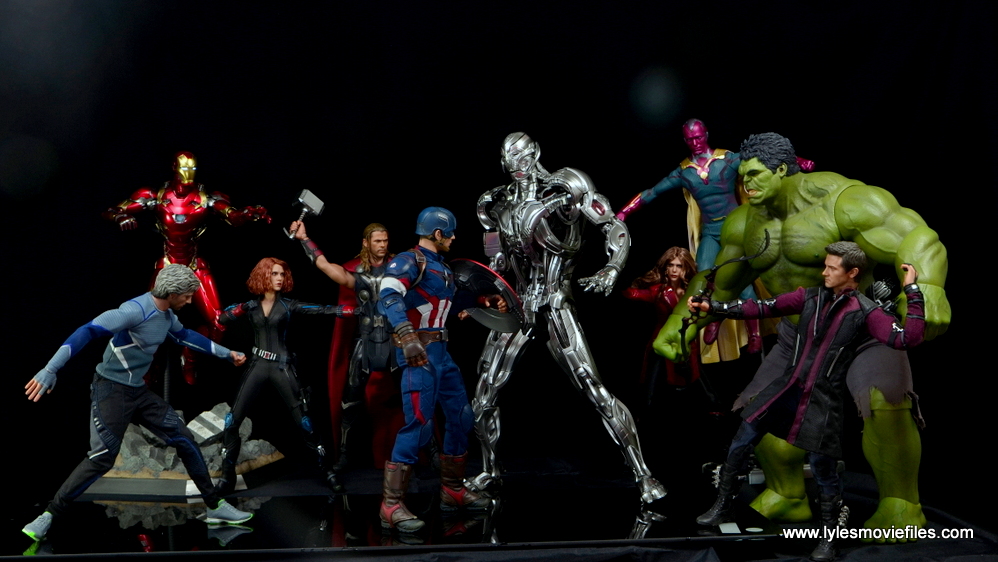 Where to get it?  I’d definitely recommend going through Sideshow Collectibles here. Ultron Prime alone will help boost your reward points impressively. Their stock is running low though so it’s a bit of a guessing game if you want to chance on a sale or be assured you’ll get one.