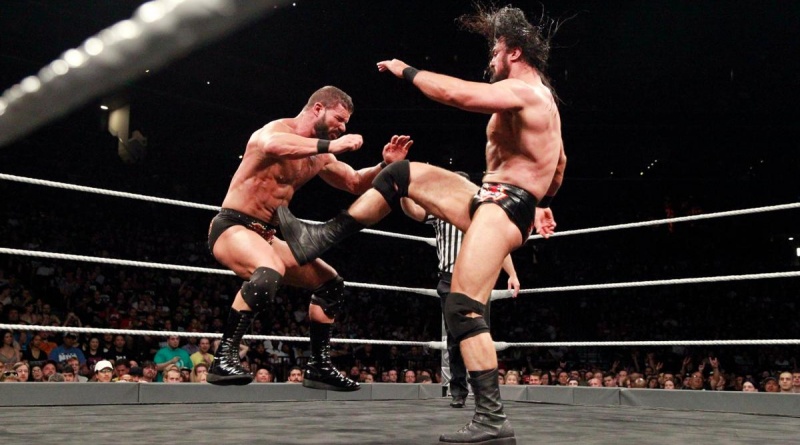 Once again the NXT crew tosses a massive gauntlet down and dares the main roster to touch it. Summerslam 2017 is going to have to be pretty special to top NXT TakeOver Brooklyn III.

Every time I wonder if there’s ever a way to recapture that old school fan passion in wrestling again I watch a Johnny Gargano match and know it’s possible. More than Sami Zayn, Finn Balor or any other smark fan favorite, Gargano connects on a deep level. He’s the only guy that consistently makes the smark fanbase become real fans again.

Almas has had some solid matches on various TakeOver shows, but has lacked a signature win. Arguably having Zelina Vega at ringside is a bigger win than most of the roster, but a win over a quality opponent still matters too.


And there’s no one more bulletproof and able to shrug off a loss than Gargano. His wins and losses won’t matter until his feud with Ciampa anyway. This one is a great back and forth with a slew of good near falls. Gargano works smart with his pin attempts and Almas doesn’t over emote when his moves don’t get a pin.

Vega distracted Johnny Wrestling with a DIY T-shirt, which caught his attention long enough for Almas to get the much needed win. I liked this one more than I expected, which was impressive as I figured this would be a good match.

Sanity vs Authors of Pain 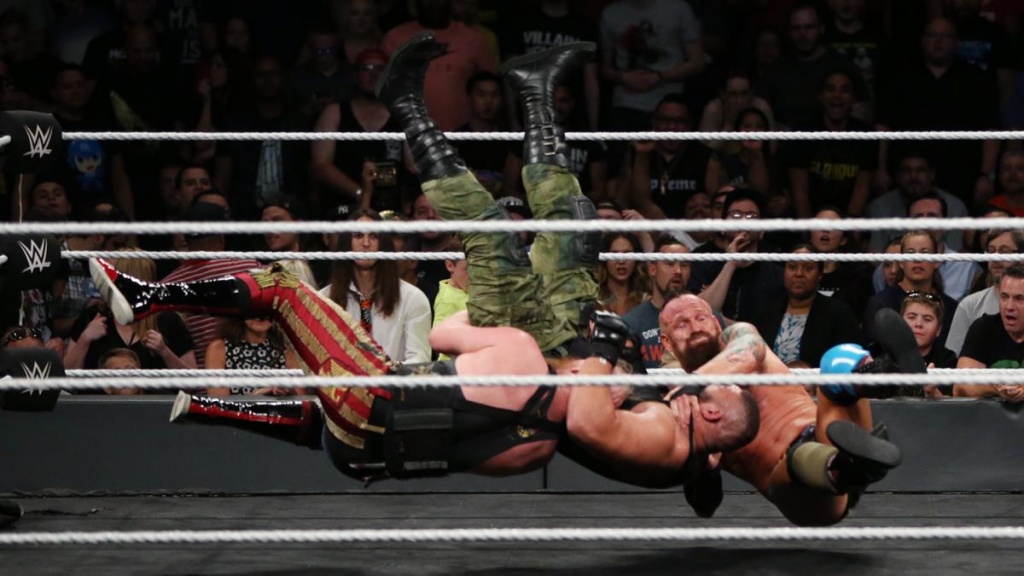 As technically sound and entertaining as the last match was, it’s hard to imagine a better segment than this one. From the pre-match brawl, the actual match and the post-match, this was booked about as a good as it gets. To foreshadow that this was going to be special, Corey Graves returned to provide commentary. Graves, Nigel and Ranallo all in one booth? And Percy has actually improved a lot so this is all money.

There were some nice layers to this with the AOP jumping Sanity before the bell to get some payback. AOP has always had a controlled fury and managed to not let their matches get personal. This time, they were riled up and it continued to cost them. Sanity pulled a terrific bait and switch with Eric Young swapping out for Killian Dain since Alexander Wolfe never tagged Dain in. I’ve been watching a ton of Freebirds matches and can’t remember them ever using that gimmick.

The commentators kept raising the smart point that Dain probably was a better physical match for AOP, especially when Young was getting tossed around. Since she’s crazy, Nikki Cross got involved attempting a cross body block onto the outside. One of the AOP caught her and a panicked Dain steamrolled him and Cross through a table. With one AOP down, Wolfe and Young were able to get a powerbomb/neckbreaker combo for the win and tag titles.

How great was this booking? AOP lost none of their mystique since it took four people to beat them. They could conceivably win the belts back in a rematch or just as easily come to the main roster and dominate. I like the options here.

Sanity might be busy though as Kyle O’Reilly and Bobby Fish stormed the ring and laid a massive beat down. Both were spinning their wheels after early solo defeats, but as a tag team the unnamed ReDragon could be a major force in NXT. 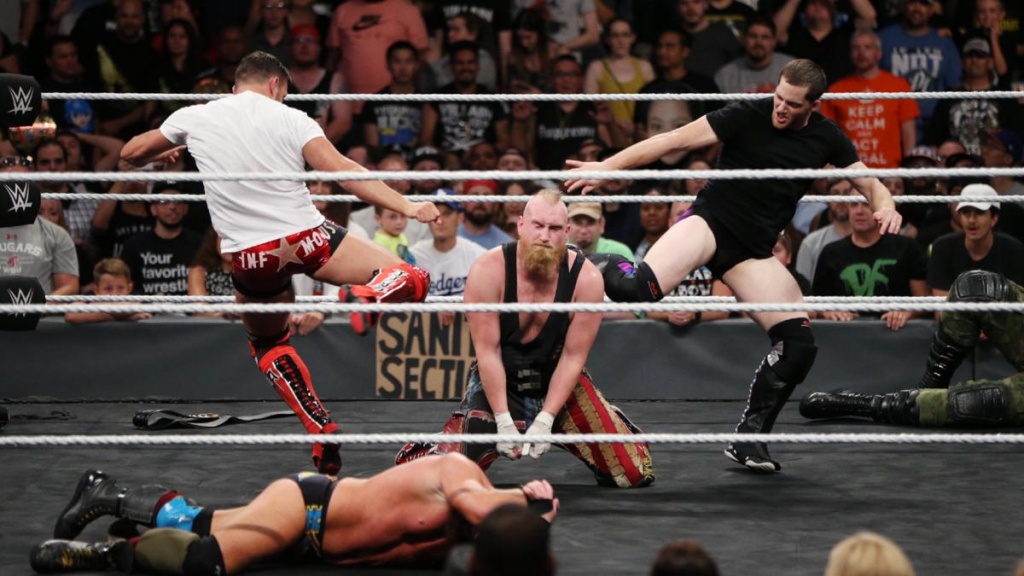 I’m not sure how this one could have been booked any better. And the rest of the card is on notice that this is the new yardstick for the night.

Bobby Roode is in the back with a Glorious T-Shirt that absolutely needs to join my closet. In the crowd, we see Neville rocking a collared shirt that hardly screams king of the cruiser weights. Nakamura and Kalisto are having a much better time.

Jim Ross joins the commentary booth for this one. Graves got to call the tag team title match and having a guest commentator right away somewhat diminishes the impact. Besides, I’d rather hear JR work the women’s title match.

Black really gives me a Baron Corbin vibe with way better striking ability. After Tuesday, I’m not entirely sure that’s a good thing. Itami’s window seems like it’s closed. Itami busts Black’s nose, but this one never really seemed in doubt. He’s basically in the Almas role from the last two years. A top tier talent who’s going to be used to give other guys quality opponents. There’s a great near fall after an Itami Falcon Arrow, but the WWE rule of thumb is never bet against the guy who has a live band performing his theme song. Black nails the Black Mask outta nowhere for the win.

Becky Lynch, Sasha Banks and Bayley are at ringside, with a big emphasis on three of the Four Horsewomen here at NXT. I keep finding that funny since they never did a Four Horsewomen gimmick on camera yet reference it all the time.

This seems like the ideal time for move the belt off Asuka. If Asuka’s so good it’s time for her to go against the main roster females instead of the minor league competition. That’s the beauty of a long title reign though. There’s genuine interest in wanting to see the champ finally lose. 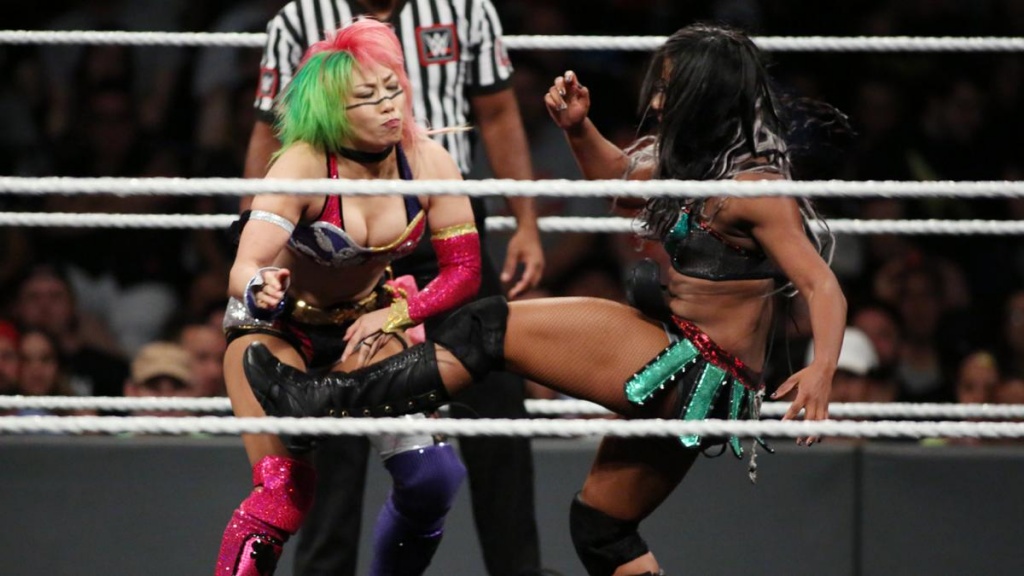 Moon starts off with great intensity and is acting like someone who wants payback and wants the big win on the TakeOver Brooklyn III stage. Asuka smartly works on Moon’s surgically repaired left arm. There was a few miscommunication spots, but they didn’t lose the fans. This is Asuka’s best and most dramatic title defense since Mickie James. Moon has done an excellent job of selling. She hits The Eclipse, which really should be the finisher given the timing… Asuka manages to catch Ember in the Asuka lock to get the tap out.

Add this one to the list of outstanding NXT Women’s matches. This was a really great match, but from a booking perspective it seems like a bad call. The fans were ready for this title change and I’m wondering if this loss will hurt Moon’s long-term chances to get the fans to buy in to her title challenges. And who’s left for Asuka now? Moon gets the full show of respect from the fans with a standing ovation. That might be better than a win here if she beats Asuka at the next TakeOver.

It’s kinda weird seeing two TNA standouts from a few years back headlining NXT TakeOver Brooklyn III. McIntyre gets the full Roddy Piper entrance with a band playing bagpipes. To his credit, he looks like a legit main-eventer now. Roode’s smoke machine and his Ric Flair homage robe is glorious. I’m kinda rooting for him to lose here so he can take his act to the main roster where it belongs.

The NXT title matches always seem to lack the same level of excitement of previous matches. The crowd almost always burns itself out before the main event. McIntyre and Roode managed to keep them invested throughout. That’s a testament to their characters because a lot of Nakamura NXT matches failed to keep the fans hyped after his theme song wrapped.

We got a lot of false finishing move finishes tonight, which was a mildly annoying trend in the two single title matches. McIntyre hit a running kick to get the win. We’re just Heath Slater winning the Universal Championship from 3MB ruling the WWE. Let that one set in for a second. Big credit on this one for delivering a strong main event to cap an impressive show. 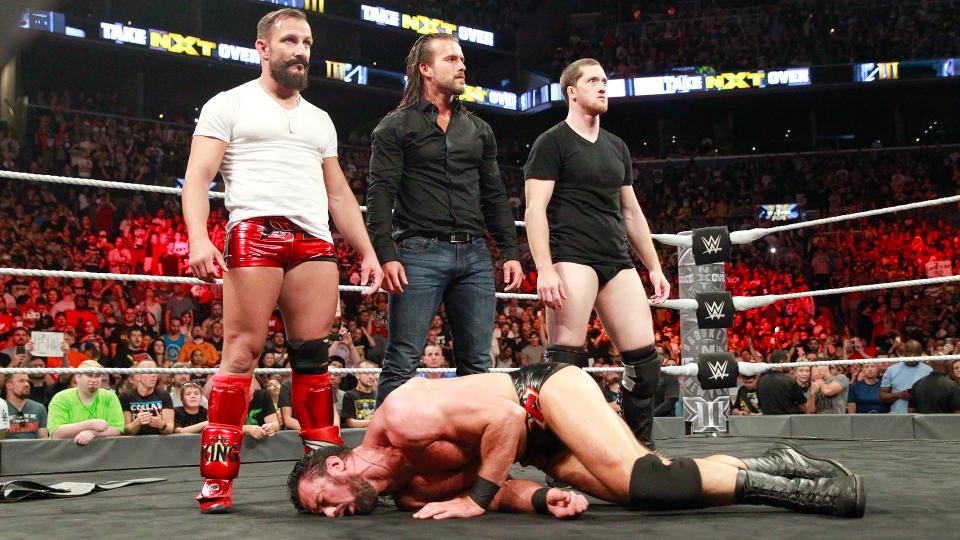 Just as the credits start to roll the crowd starts reacting huge. McIntyre gets distracted by Fish and O’Reilly. Adam Cole attacks McIntyre. The ROH invasion has begun! Cole can immediately take over as the top heel allowing Roode to go to the main roster and the second half of the year for NXT booking pretty much writes itself. This has a ton of potential since there’s some other ROH guys en route like Lio Rush and Donovan Dijak. Not to mention Roddy Strong already being a NXT force.

I feel pretty confident saying NXT TakeOver Brooklyn III is going to win the wrestling weekend. In a card where the weakest match was a strong Itami/Black, titles changed hands and the start of a WWE invasion angle done right, this could be the top US show of the year.